Jet boat carries history of an era, can it be resurrected?
0 Comments
Share this

In 1969, my father bought a boat. It was not a typical Montana fishing craft.

This was a 19-foot, deep V-hull, Buehler jet boat with a 440 Chrysler V-8 engine blasting its fiberglass hull rocket-like across the water. It could make hairpin turns at high speed and rode through one particularly bad storm on Canyon Ferry Reservoir when winds produced waves at least 8-feet high.

One similar to it, a Buehler Turbocraft, was featured in the 1965 James Bond movie “Thunderball.”

In 1960, President Eisenhower was going to make a gift of one of the boats to Russian leader Nikita Khrushchev, but in May of that year – during the height of the Cold War – the Russians shot down a U.S. spy plane. When Eisenhower refused to apologize for spying, Khrushchev cancelled a summit between the nations and the gift was torpedoed, making national news. For a while, the boat was stranded at the U.S. Embassy compound in Moscow.

Jacqueline Kennedy owned one of the jet boats that she used for water skiing, and the Secret Service purchased one that agents drove to protect President John Kennedy’s family when they were on the water.

Buehler jet boats were advanced for their time. Up until then, most boats were powered by propellers. New Zealand inventor Sir William Hamilton reportedly worked 25 years to perfect a jet propulsion system, called the HamiltonJet. Water was sucked up from a screened hole in the bottom of the boat and propelled through a shaft that squirted the powerful stream out the back to power the boat forward. The engine ran the drive shaft that operated the jet pump.

The beauty of a jet boat is that it can navigate in shallower water without fear of the motor shaft or a rudder hanging down bouncing off rocks and boulders. It was also safer, since there was no chance of being cut up by external propellers.

The unique system caught the eye of John Buehler, an avid outdoorsman whose Indiana Gear Works manufactured parts for the aerospace industry. Recognizing the possibilities, in 1959, Buehler teamed up with Hamilton to build boats in the United States using the jet propulsion system.

The first boat using the new method was a 16-footer powered by a Ford six-cylinder engine. The boat cost $2,900. Buehler also licensed the jet system to other boat manufacturers.

A 1960 newspaper advertisement in the Nashville Tennessean says the Buehler Turbocraft “brings the jet age to boating. An exciting new world of fun, thrills and adventure is open to boating fans once they pilot the revolutionary Buehler Turbocraft,” boasting that it could run in water only 3 inches deep when on plane. An associated news story was headlined: “’Jet’ Boat Big Step In Marine Progress.”

To prove the ability of the jet engine, the corporation filmed some of its boats powering up the Colorado River at Lee’s Ferry in June 1960, crashing through raucous waves during spring runoff. National Geographic published a story about four of the boats navigating 300 miles of the river between Lake Mead and Lee’s Ferry in a 1962 article titled “Shooting Rapids in Reverse!”

“No one had conquered this boiling, rapids-loaded water escalator that spumes 80,000 cubic feet of water per second down through a tiny sluice that over a million years has cut a gash a mile deep through rock and rubble,” wrote Hank Wieand Bowman in his Water Line column published in the Shreveport, Louisiana paper in 1964.

One boat was so badly damaged in the excursion that it was abandoned. A member of the expedition broke his leg on a “shakedown cruise” and had to be evacuated by helicopter. Bowman called the expedition “the most dramatic white water conquest in history.”

“We needed no one’s warning to take care,” wrote William Belknap Jr. for National Geographic of the 1960 expedition. “Lonely graves in the canyon and the wreckage of the boats offered enough danger signs.”

Photos show the boats navigating the torrential rapids, as well as the team members patching up holes on beached boats.

“Photographs can only hint at the violence of the struggle between man and river,” Belknap wrote. “One moment the boat teeters on a wave top. Another instant, and nothing shows above the crests but the driver’s head. Always the river roars and thunders, drowning every human sound.”

Despite all of the hype and publicity, in 1971 Buehler dropped the jet boat business to focus on his aerospace parts industry, ending an era. However, in 2014, the brand was resurrected by a group of Swiss, American and French entrepreneurs. They launched a newly designed boat using the Turbocraft technology in 2015.

How such a watercraft ended up in tiny Bozeman, Montana, I have no idea. For decades the boat provided endless outings on waterways in the region, from puttering past the dead skeletons of trees inundated by the 1959 earthquake that created Quake Lake, to powering down Bighorn Reservoir not long after Yellowtail Dam was completed in 1967. My family was boating through history and I had no idea.

In his own version of the Colorado River stunt, my dad and his neighbor, George Roemhild, added a spare gas tank to the jet boat so we could motor up the Missouri River from Judith Landing.

The boat purchase eventually led my father to Canyon Ferry Reservoir where we started camping at Goose Bay Marina. When the 13-foot trailer began feeling too crowded, he bought land on the other end of the lake above Yacht Basin. It was there about four years later my father introduced me to his carpentry skills. From trees he logged and sawed using his uncle’s tractor-powered sawmill, dad created the rough wood for a “cabin” of his own design. “Jack’s Shack,” as it became known, was from then on the centerpiece of our summers.

All of this because he bought a boat. A boat that he later gifted to me and I – not being mechanically inclined and having busted it up badly in a Cemetery Island camping trip storm – sold to my uncle, his brother.

My uncle repaired the damage and this summer, my cousin asked if I’d be interested in re-taking possession of the boat, some 20 years later. All of my memories of growing up with that 19-foot fiberglass beauty came flooding back. I felt guilty and giddy at the same time. Towing it back to Billings from Canyon Ferry, one of the trailer tires blew, reminding me of the responsibility I was undertaking.

Now it sits parked in the driveway as if questioning my good sense. What was I thinking? I’m no better at taking care of a boat now than I was years ago.

Yet in writing this story, I see how the boat still captures my imagination, how it took on such great significance and ended up bonding a family, as well as creating a rally point for so many gatherings. We must have taught more than 50 people how to water ski.

My love of being on the water is inherently tied to this one boat. Can the 19-foot Buehler jet be resurrected? I feel a great responsibility to see that it glides over glassy water once again. 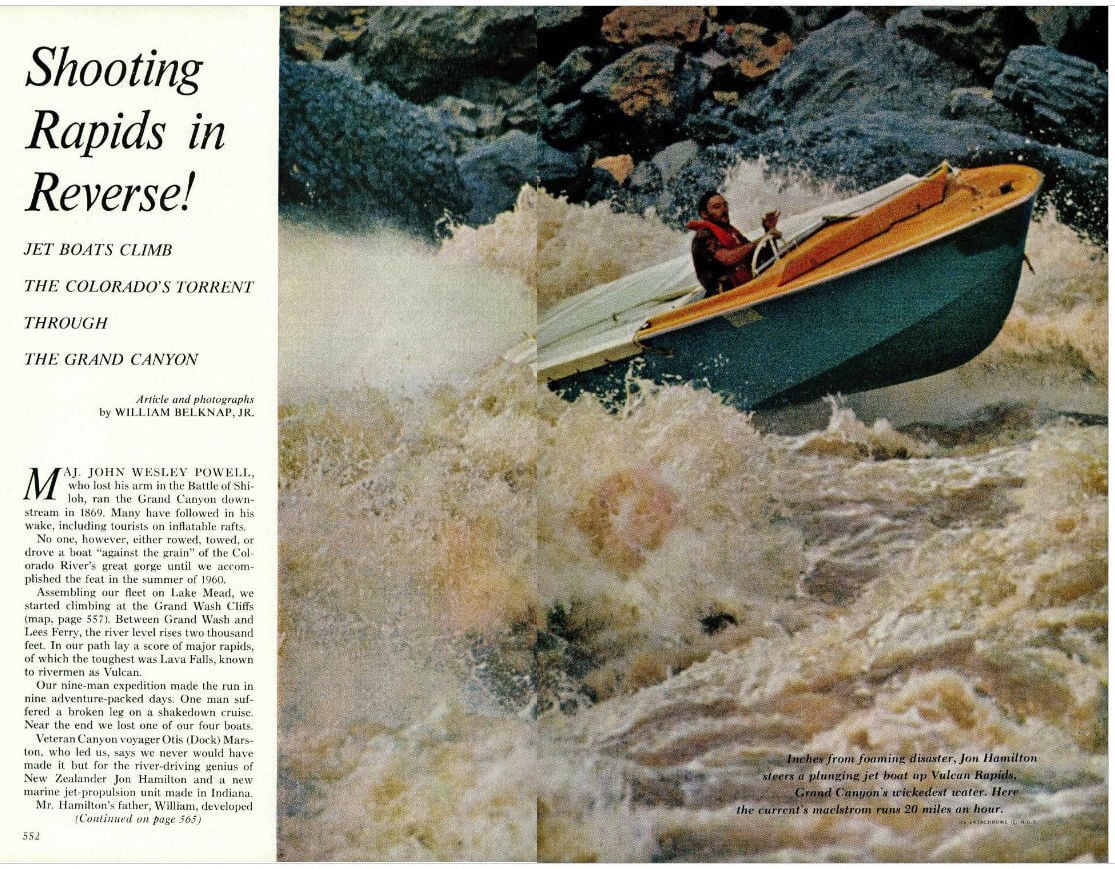 This screen grab shows a 1962 National Geographic story about a 1960 expedition up the Colorado River by four Buehler jet boats, the first trip of its kind. 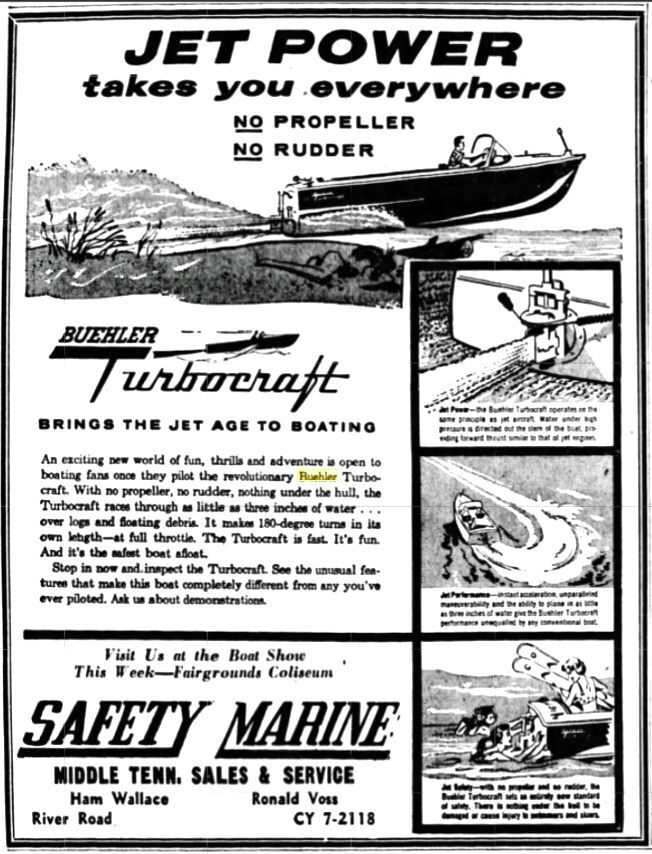 A 1960 advertisement touts the new technology of the Turbocraft. 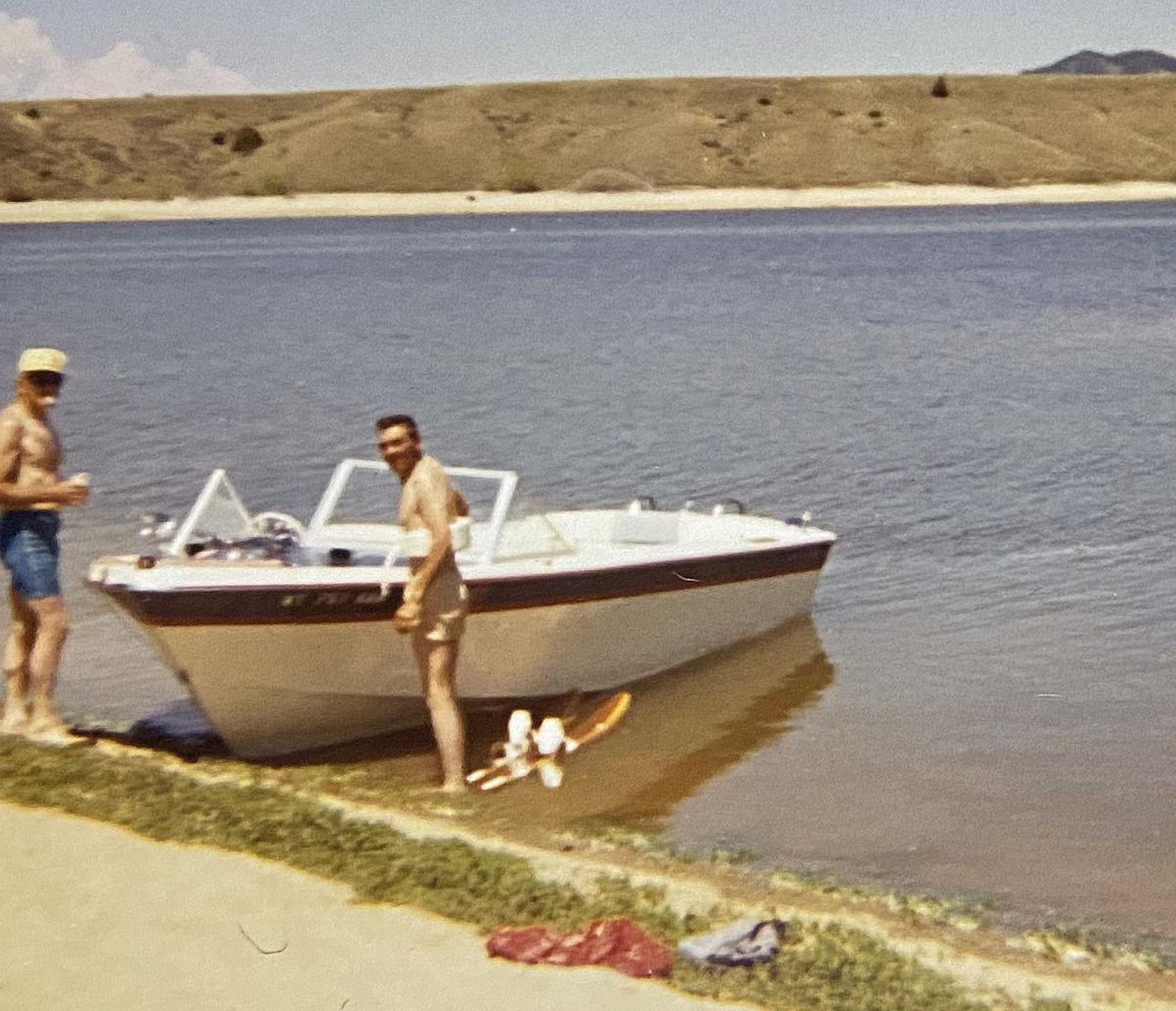 Jack French, at right, purchased his jet boat in 1969. The craft eventually led him to Canyon Ferry Reservoir where he learned to water ski and built a summer cabin. At left is his father-in-law, Cec Evans. This photo dates to the early 1970s. 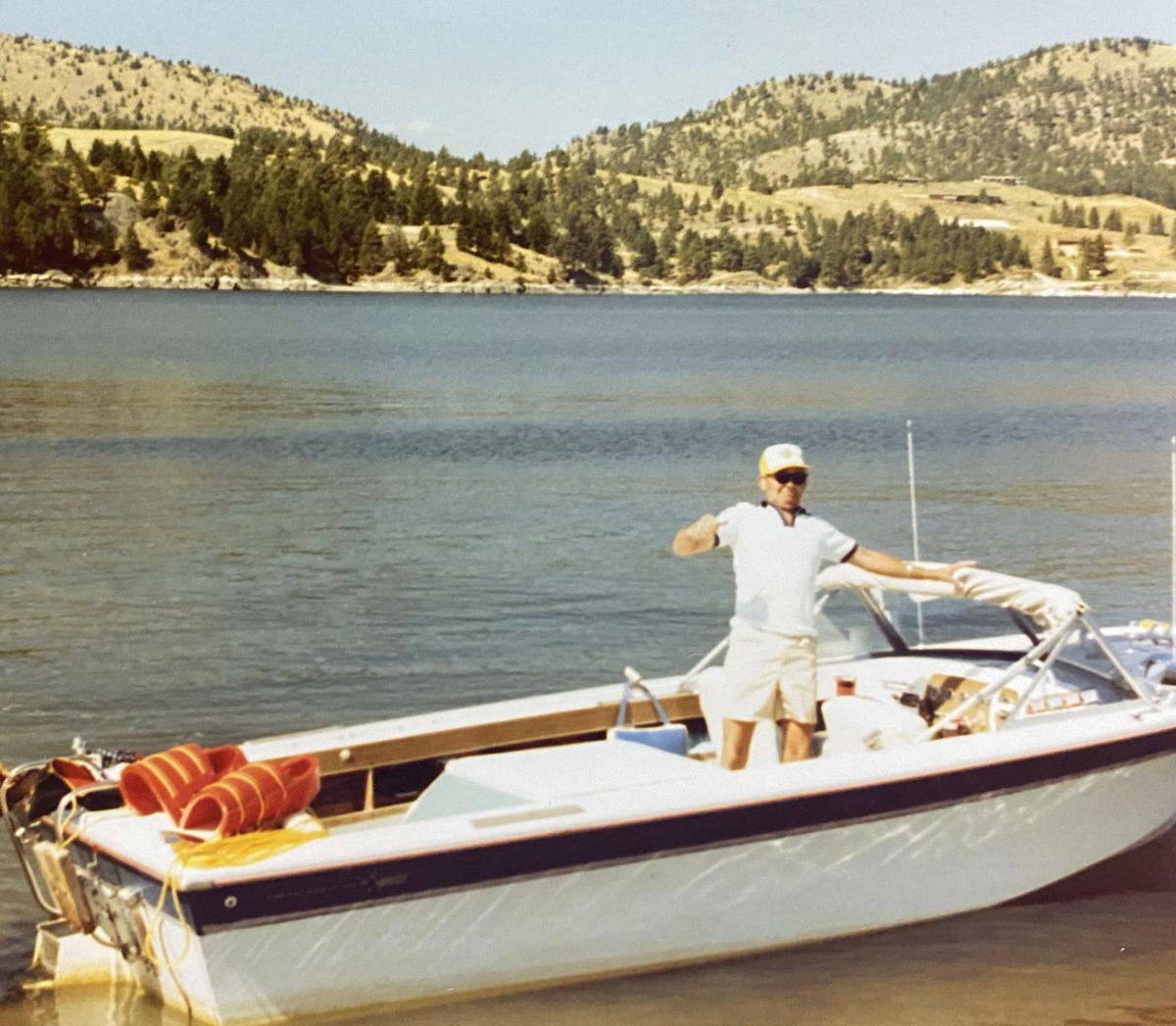 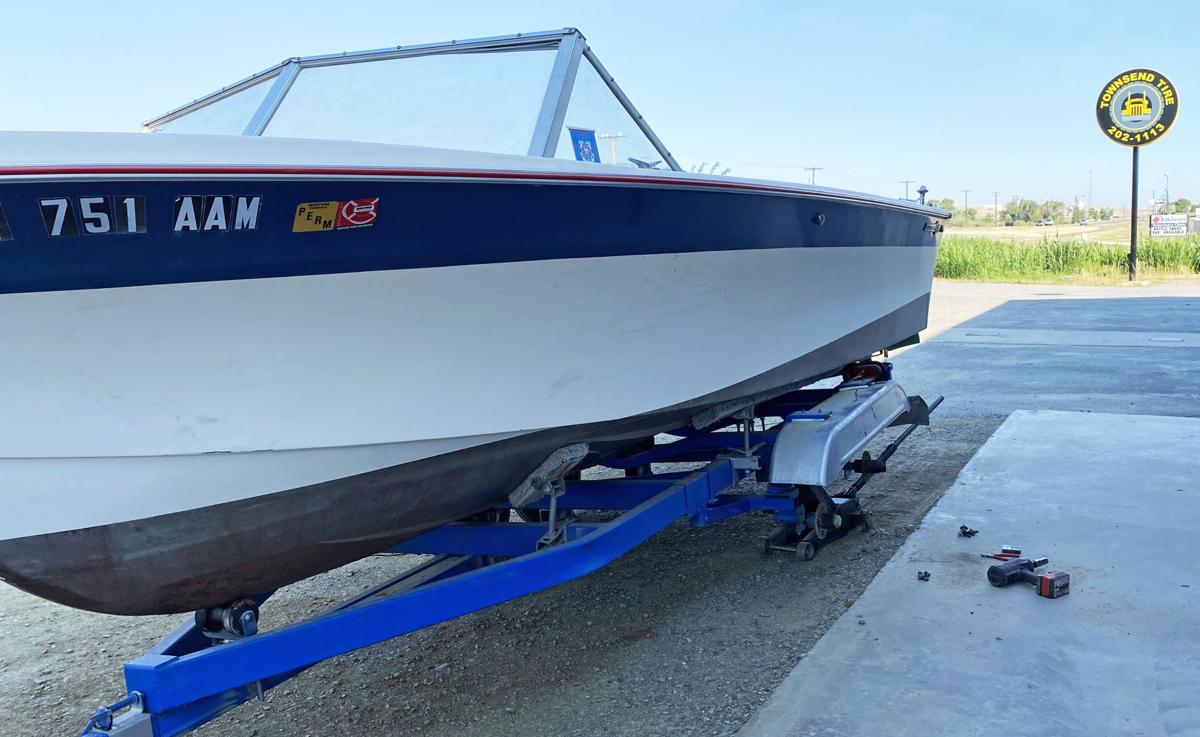 Being fitted for new tires on its trailer this July, the 1969 Buehler jet boat has been resurrected for a third shot at traversing Montana's waters.