Wyoming hunters and anglers will have the opportunity to participate in a unique study — trying to quantify the amount of wild game and fish they consume.

“Recognizing the added value hunting and fishing bring to the local food system is important not just to hunters and anglers and their families, but to people who do not hunt or fish,” said Brian Nesvick, Wyoming Game and Fish director, in a press release.

The survey, produced by the Canadian-based nonprofit Wild Harvest Initiative, is one way of estimating the value of hunting and angling in the state as a food source.

“One of their main priorities is to communicate the value hunting and fishing brings” to the state, said Sara DiRenzo, Wyoming Game and Fish Department public outreach specialist.

The initiative has already provided some sizable estimates of wild game consumption on a larger scale. Between 2014 and 2016 in the United States, whitetail deer provided more than 642 million pounds — or 1.7 billion 6 ounce servings of meat — the group estimated.

Such quantification was no easy task, according to Shane Mahoney, founder of Wild Harvest Initiative. The group had to first develop a list of all wild game, find out how many of each species was harvested, estimate the consumable amount of each species and then put a price to the meat to estimate economic value. WHI is also putting a price to how much it would cost to raise that much protein if wild game wasn't available to show the replacement cost.

"These traditional activities that we love and are engaged in, I want to finally make peoiple realize this is no sideshow and that it's actually part of our food security," Mahoney said.

What’s unique about hunting and fishing is that participants often share with friends and family the wild protein they obtain, not unlike your neighbor who grows too much zucchini.

“We would never think of going up to the grocery store, buying a piece of meat and giving it to our neighbors,” Mahoney told writer Nick Wesdock for a 2015 story.

Such generosity has been key in keeping the sports acceptable to a majority of people who neither hunt nor fish.

“The social license for hunting has always been attached to the idea of food procurement,” Mahoney said.

DiRenzo said Wyoming Game and Fish’s partnership with the Wild Harvest Initiative also ties into the locavore movement, the attempt by consumers to eat food grown or produced locally.

"We're sailing with the winds of change," Mahoney said, rather than fighting against something which is often the case in the conservation arena.

The COVID-19 pandemic has increased interest in activities like fishing, hunting, raising chickens and gardening as people take a greater interest in procuring their own foods.

“As a liberal, urban, coastal-living walking cliché, I care where my food comes from: I’ll pay for the precious $4 peach, the $8 carton of local eggs, and whatever my bougie butcher counter charges for its organic grass-fed beef,” wrote San Francisco-based journalist Rachel Levin in a 2020 Outside article on women hunting. “But I have never cared quite enough to take it to the next level and harvest my own.”

Levin went on to note, “Modern-day omnivores have long outsourced the dirty work, of course. And in doing so, we’ve created something even dirtier: factory farms and slaughterhouses. Things most meat eaters like to ignore for the ease and inoffensiveness of picking up a pound of plastic-wrapped chicken breasts on the way home from work.”

Even something as easy as picking up meat at the grocery store proved challenging at times over the past year, however. The pandemic revealed flaws in the nation’s food system, with supplies choked off by virus outbreaks at meat packing plants or shoppers hoarding supplies, leaving store shelves bare. Chest freezers were hard to find, if not impossible, and canning goods and seed stocks were selling out.

DiRenzo sees the research in Wyoming solidifying information on another partnership, as well.

The Wyoming Hunger Initiative estimates that one in four of the state’s children struggle with food insecurity. Food from the Field — and similar groups in other states — take donated game meat, have it butchered and provided to food programs, helping to deliver a source of low-cost, healthy protein.

“I think it’s a really good opportunity to learn a little bit more about something we haven’t researched before,” she said.

"If you took wild game out of some families' economy, it would be pretty disruptive," Mahoney said.

Mahoney’s program also has another goal. By quantifying consumption of wild game and fish, sportsmen and women can point to their value when attempting to conserve wildlands from development.

"There are services provided by these lands that can bring an enormous amount of benefit to people," he said.

The research will also extend to other sustainable wild harvests, including berries and fruits, mushrooms, wild honey and medicinal plants.

“We know that the percentage of Wyomingites who hunt and/or fish is higher than the national average, and it goes without saying that the majority of the state’s residents likely support sustainable natural resource use and wild harvest activities, especially in terms of food procurement,” Mahoney said in the WGFD press release.

About one-quarter of Wyoming’s 578,000 residents hunts or fishes, which is higher than the national average, DiRenzo said. Yet nationally the number of people hunting and fishing has been steadily declining.

“Hunter numbers peaked in the U.S. in 1982, when nearly 17 million hunting licenses were sold,” according to WHI. “By 1991, license sales had fallen to 14 million, representing 7% of the total population. This downward trend continued and, in 2016, the U.S. reported less than 11.5 million hunters, representing just 4% of the population.”

“We are detached from the growing, raising, harvesting, and slaughtering of animals, and from the butchering, preserving, processing, and, to some extent, even the cooking of our own food,” Mahoney wrote in a 2016 Sports Afield column.

“We want people to keep hunting and fishing for a variety of reasons,” DiRenzo said, including for wildlife management and to foster the heritage that surrounds the activities.

Fishing and hunting license sales are also the primary funding source for state fish and game agencies. A continued decrease in the number of people taking part in such sports could eventually lead to the cutting of agency staff and programs, and/or a steady increase in license costs.

In Missoula, Backcountry Hunters & Anglers partnered with the Boone and Crockett Club to establish a class at the University of Montana called Hunting for Sustainability. The class “addresses the challenge some would-be hunters experience as they attempt to break into the sport, offering novices a hands-on weekend of learning guided by seasoned hunters and other experts.”

The other option is to find a way to generate money from other outdoor activities whose participants don’t pay for licenses yet value wildlands and wildlife.

“The Wildlife Society has done a lot of work highlighting the deficiencies in state wildlife budgets because they’re so based on hunting and fishing license fees,” Temple Stoellinger, an assistant professor at the University of Wyoming’s Haub School of Environment and Natural Resources and College of Law, told writer Christine Peterson for a 2020 Casper Star Tribune story. “As we see fewer people hunting and fishing, those budgets decline, and finding a way to stabilize those budgets is really important, particularly for nongame species.”

Stoellinger co-authored a research paper looking at the practicality of charging a fee for Yellowstone National Park tourists that would go to conservation work in the three surrounding states of Idaho, Wyoming and Montana.

An entrance fee increase of between $1 to $10 per vehicle would raise between $1 million and $13 million each year, Peterson reported.

"There's just a great many layers to this," Mahoney said. "I'm hoping to build a much larger constituency for the national world."

A late season hunt for whitetail deer in southwest Montana that ended on Feb. 15 resulted in 52 out of 305 deer testing positive for chronic w…

For 35 years Dee Dee Hawk was solving unusual mysteries like whether a captured grizzly bear was guilty of attacking a human. Sometimes using … 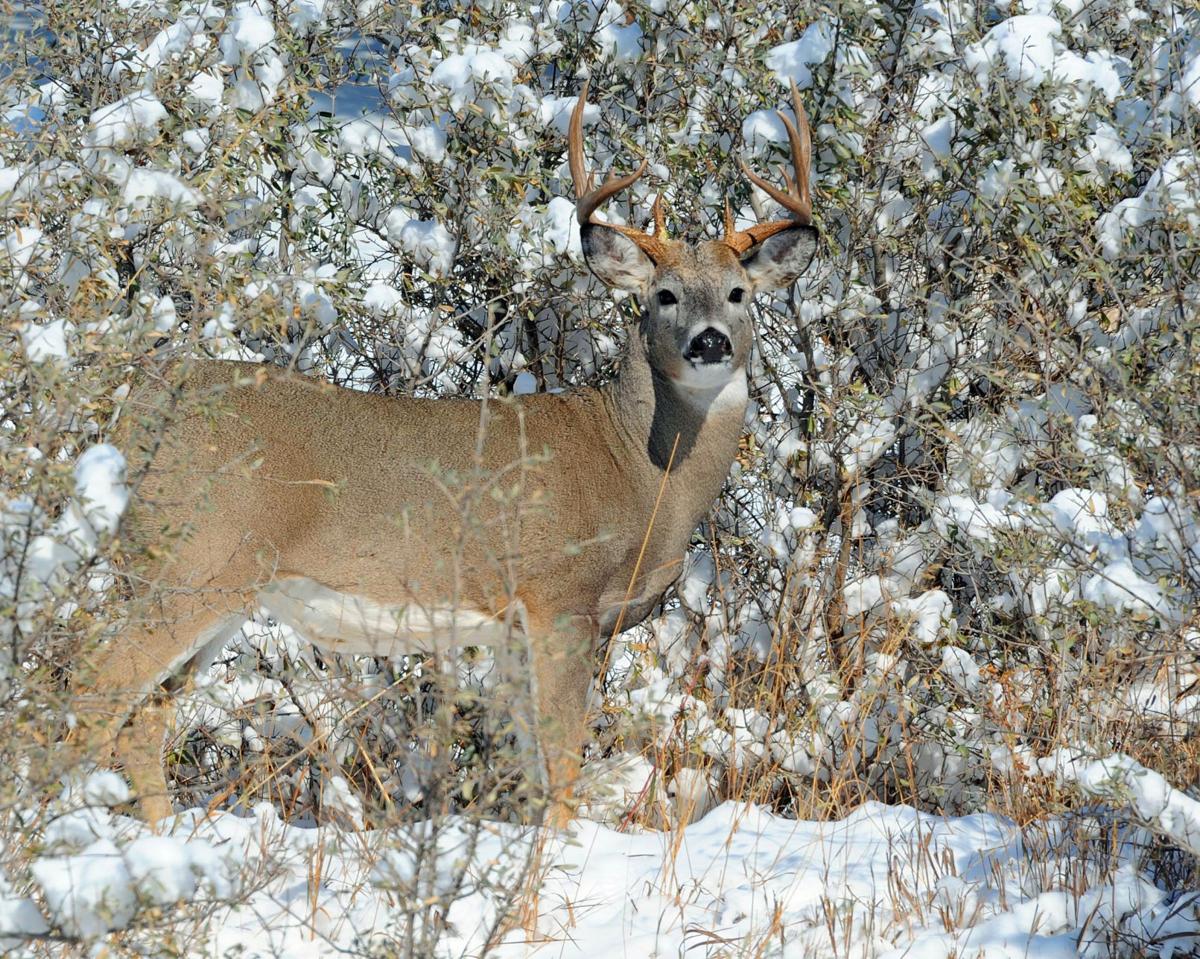 Whitetail deer accounted for an estimated 642 million pounds of consumable meat for U.S. hunters between 2014 and 2016 according to estimates by the Wild Harvest Initiative. 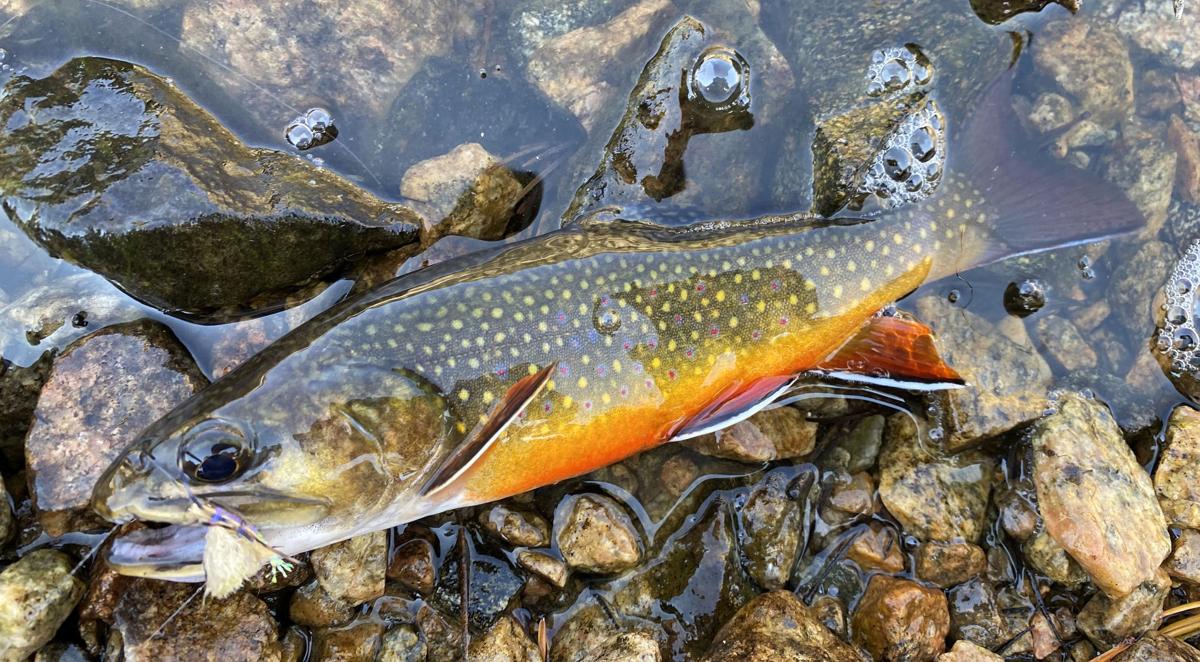 Properly managed fisheries produce protein for many anglers across the United States. 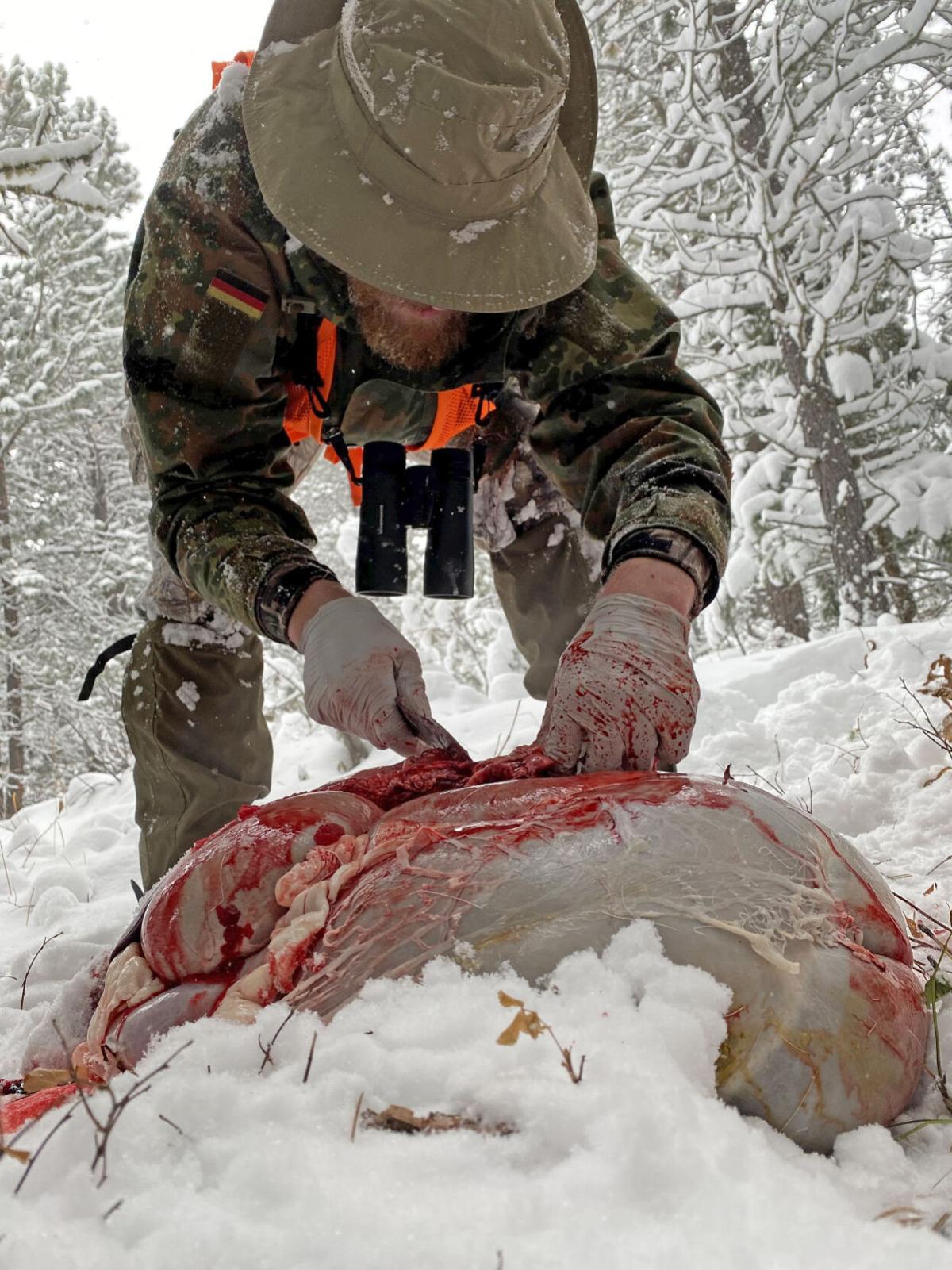 A hunter cuts out the liver of a whitetail doe after a successful foray. About 14 million Americans hunt with the fees they pay for licenses helping to support state wildlife agencies and the programs they oversee. 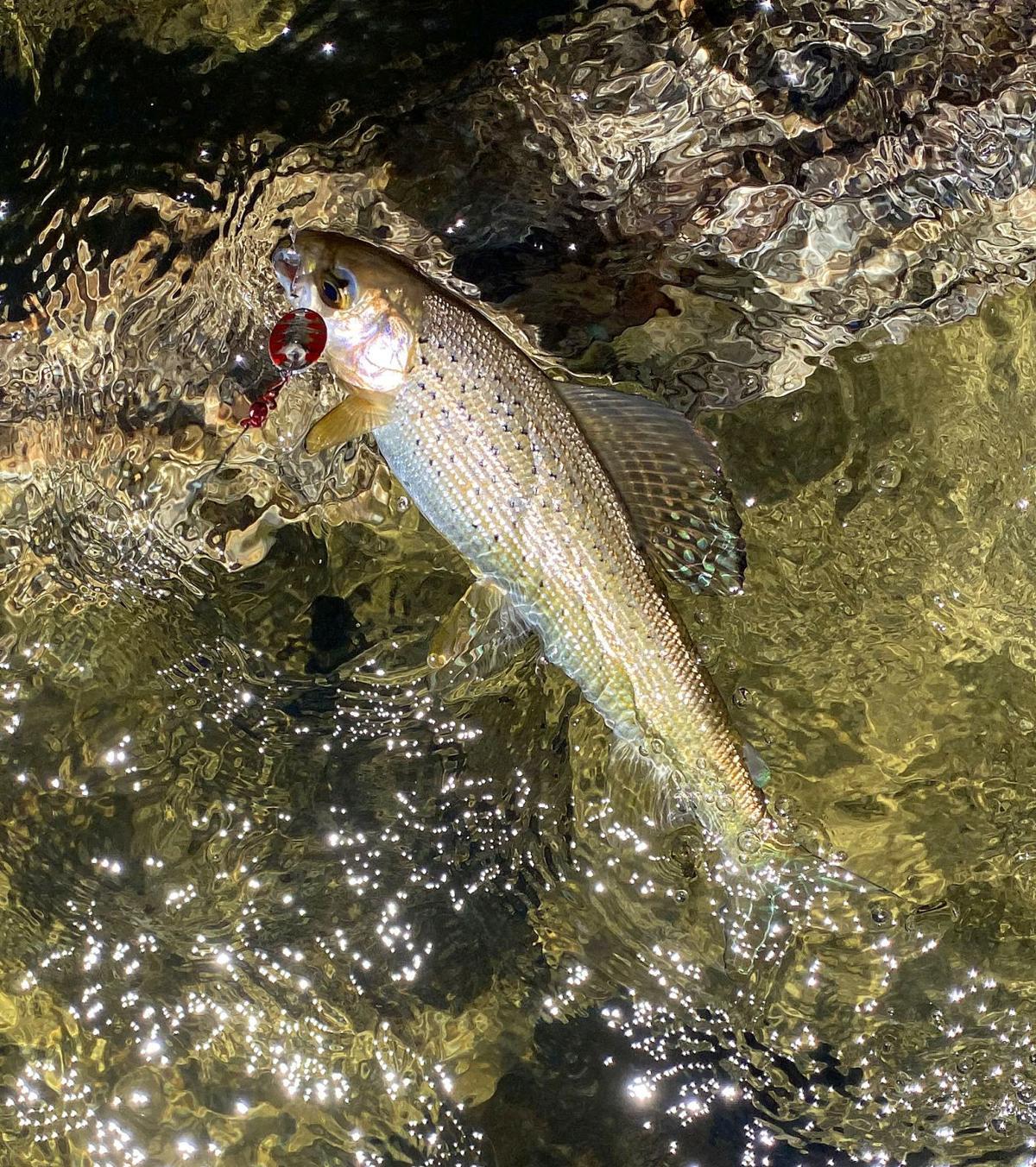 There are about 33 million anglers in the United States, one way for people to procure wild protein. 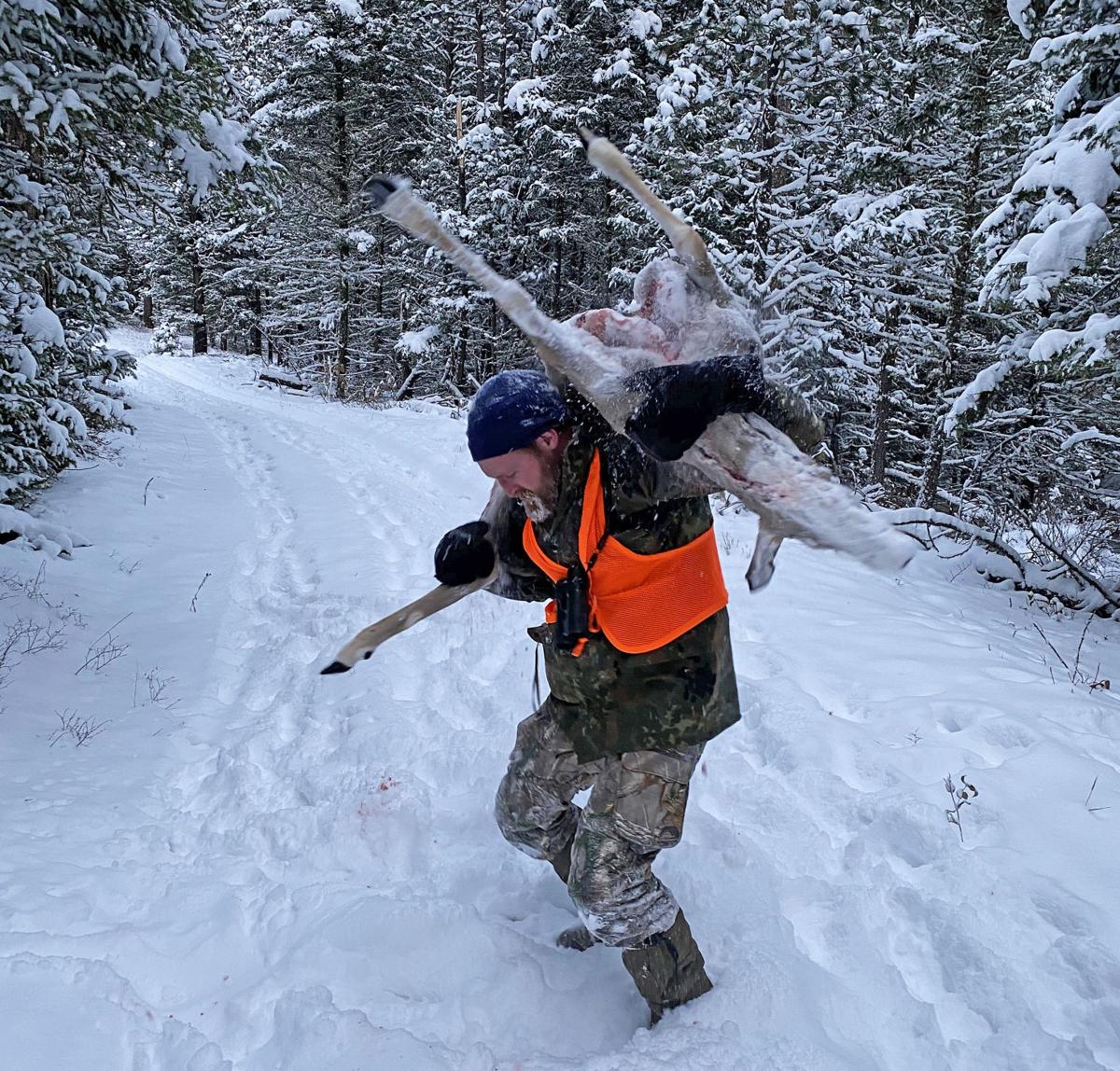 A hunter hoists a whitetail doe onto his back as he packs the animal out of the forest. 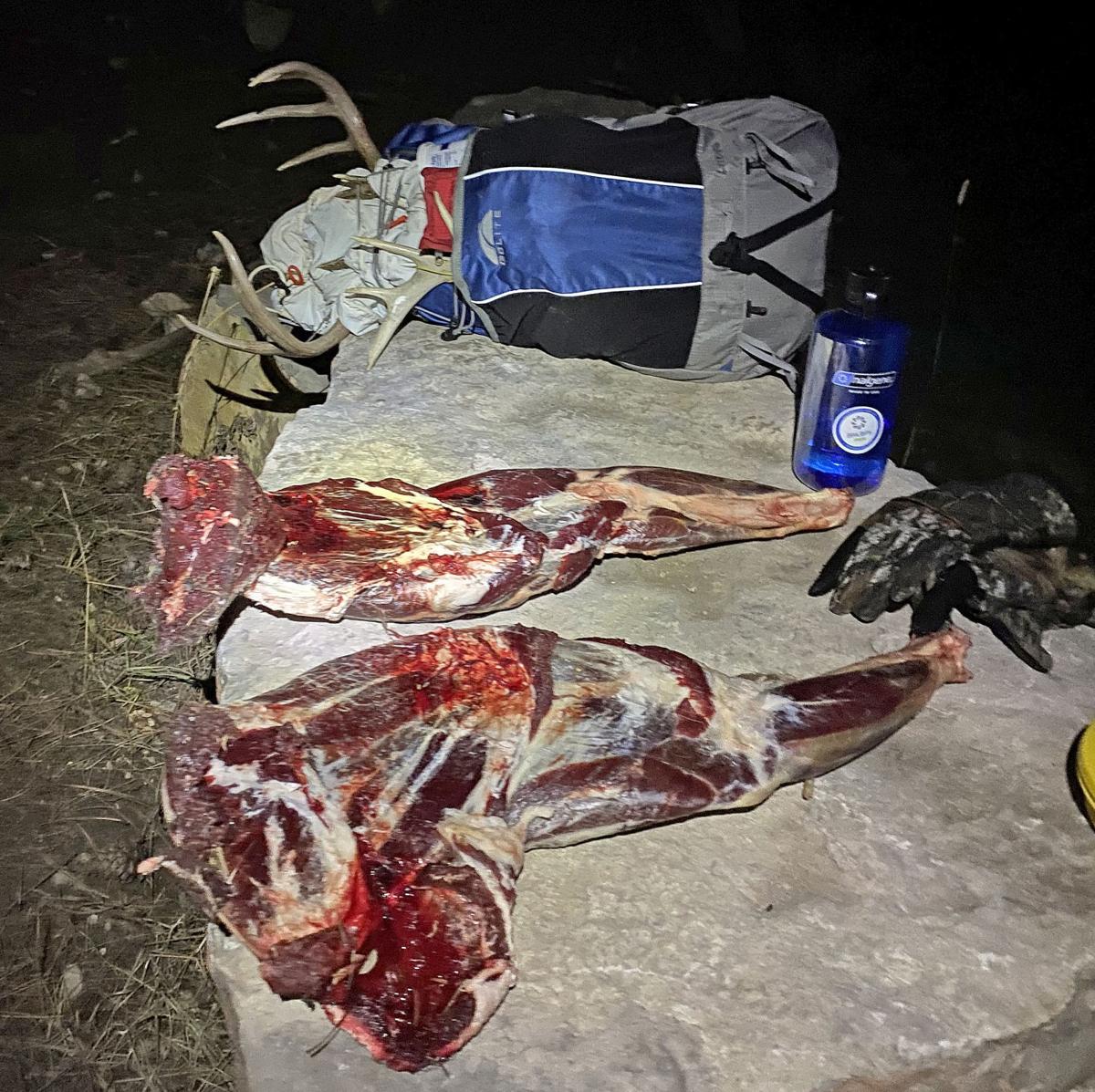 Two deer hindquarters rest next to a pack used to haul out a partially butchered whitetail buck.