After a dry November, snowfall picked up in the second half of December in Montana, bringing mountain snowpack closer to normal in much of the state.

The exception has been southwest Montana, where snowpack in the Jefferson, Madison and Gallatin river basins remains below normal, according to the Natural Resources Conservation Service. That dry area is also found in north-central Wyoming’s Bighorn, Tongue and Powder river drainages.

“The weather over the final two weeks of December was more active, and storms before the new year began helped to build the mountain snowpack and stop the decline in percentages,” said Lucas Zukiewicz, NRCS water supply specialist in Montana.

Snowpack varies widely across the state. The upper Yellowstone, Smith-Judith-Musselshell, Helena Valley, upper Clark Fork, lower Clark Fork and Bitterroot all range from 90% to 97%. The Kootenai and Flathead basins are at 105%. To the east, the St. Mary’s, Milk and Sun-Teton-Marias drainages are 112% to 129%.

“Southwest Montana, which didn’t receive the early boost in snowpack totals during October, is the only region in the state with snowpack that is well below normal for this date,” Zukiewicz said.

Montana’s drought status map continues to show the southeastern Montana counties of Powder River and Carter as severely dry, along with Roosevelt and Sheridan counties in the northeast. Seventeen other counties are rated moderately dry, including around Yellowstone, Gallatin and Richland counties.

On Friday, NOAA announced that 2020 was the United States fifth-warmest year in recorded history. 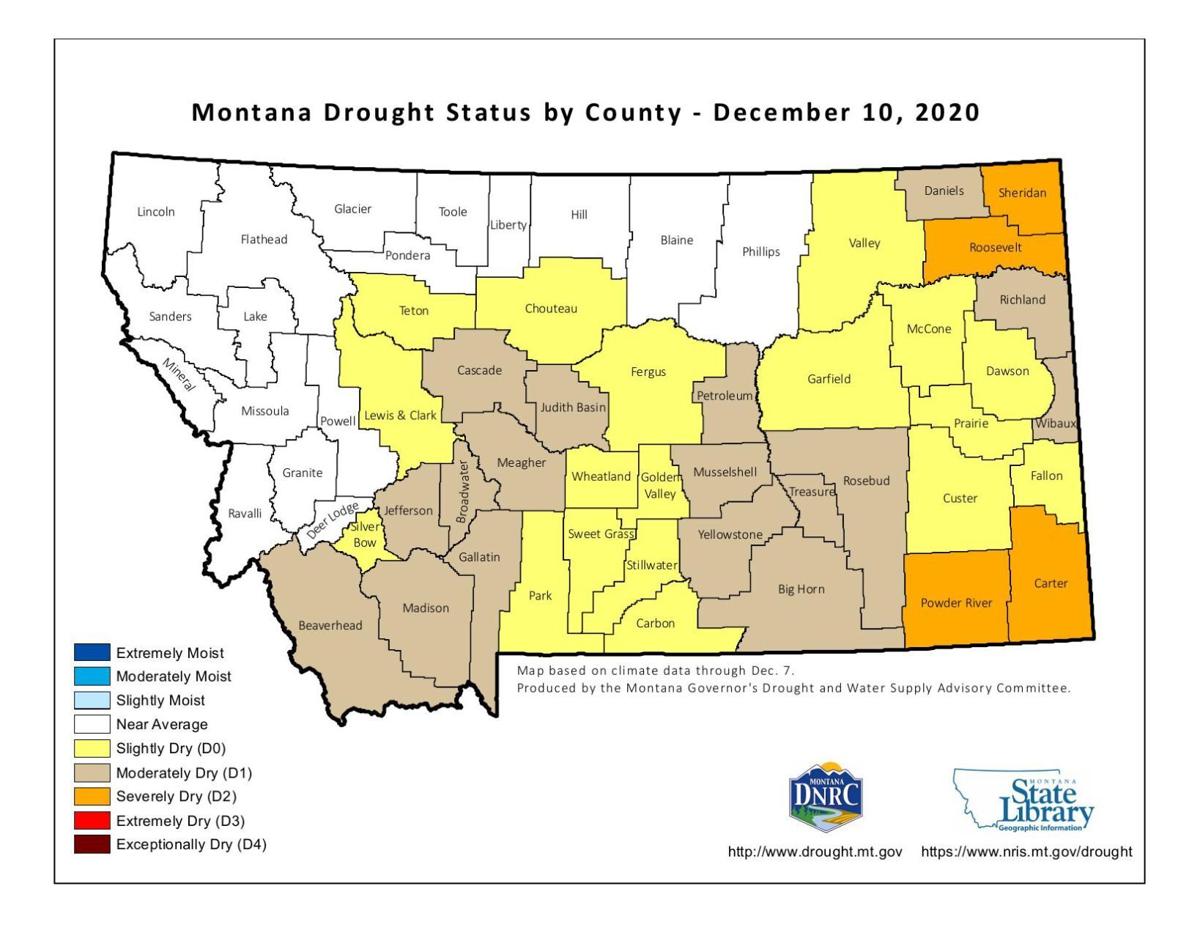 The dry winter hasn’t gone unnoticed by skiers and snowboarders who saw delayed openings at several Montana ski hills. Thankfully, recent storms have been slowly but steadily building the snowpack.

For snowmobilers, backcountry skiers and ice climbers, however, the new snow is stressing a weak layer in the snowpack. Because of this, the Gallatin National Forest Avalanche Center on Friday rated the chance of avalanches “considerable” in the Bridger Range, entire Madison Range, southern Gallatin Range and Lionhead areas. Avalanche conditions were rated “moderate” in the Cooke City area and northern Gallatin Range.

“Dig and test the stability before venturing into avalanche terrain and back off of slopes if you see red flags of avalanche activity, cracking or collapsing,” the center advised in its report.

Missoulaavalanche.org rated the conditions in west central Montana’s backcountry as “moderate,” a downgrade from two days earlier when they were rated “considerable.” The Flathead Avalanche Center rated conditions “moderate” on mid-elevation to high-elevation slopes and “low” in terrain below 5,000 feet.

Montana started its 2021 water year in October with well below normal temperatures and above average precipitation for most areas. Strong storms frustrated hunters at the opening of the rifle season, but gave the snowpack a strong start in most mountain locations.

As of Jan. 1, around 35% to 45% of the snowpack has accumulated in the mountains, leaving plenty of time for snow totals to recover before runoff begins this spring and summer.

“You don’t have to look far back in time to find a winter where early season snowpack totals weren’t looking good in certain parts of the state,” Zukiewicz said. “Just last winter, snowpack totals in many river basins in western Montana along the Idaho border were below normal, only to have the weather patterns change and improve conditions before we got to runoff.”

According to forecasts published Jan. 6 by NOAA’s Climate Prediction Center, the next two weeks are predicted to bring higher probabilities of above normal precipitation to many parts of Montana, yet the warmer than normal temperatures are likely to persist.

“At this point we’ll take what precipitation we can get, especially in southwestern Montana,” Zukiewicz said. 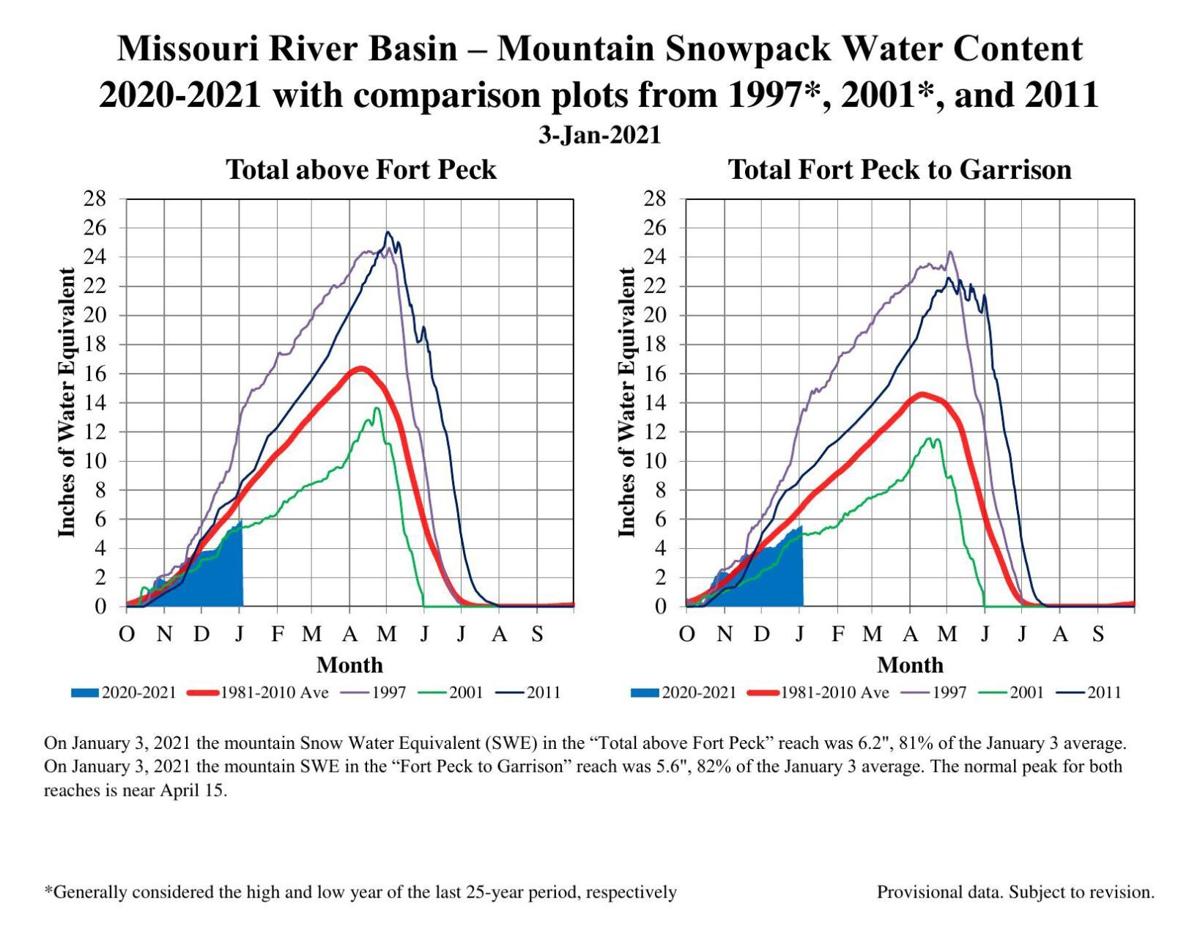 In preparation for spring runoff, the Army Corps of Engineers keeps close tabs on runoff in the upper Missouri River Basin. Looking ahead, the Corps is predicting runoff in 2021 for the basin above Sioux City, Iowa, at 23.1 million acre feet, which would be 90% of average. The runoff forecast is based on significantly drier-than-normal soil moisture conditions, low plains snowpack, and below-average mountain snowpack, the Corps said.

There’s still a lot of time for that to change as more than half of the mountain snowfall typically occurs from Jan. 1 to mid-April, peaking near April 15.

At the end of December, Fort Peck Reservoir’s water level was at an elevation of 2,235.9 feet. That’s predicted to drop to 2,234.7 feet by the end of January. Releases from the dam have been averaging 10,500 cubic feet per second.

An unusually dry and warm August and September have left much of Montana stressed by moderate to severe drought.

September stands out in review of 2020 weather

As 2020 draws to a close, data from the National Weather Service in Billings shows that the year was on the warmer and dryer side of things in Billings. 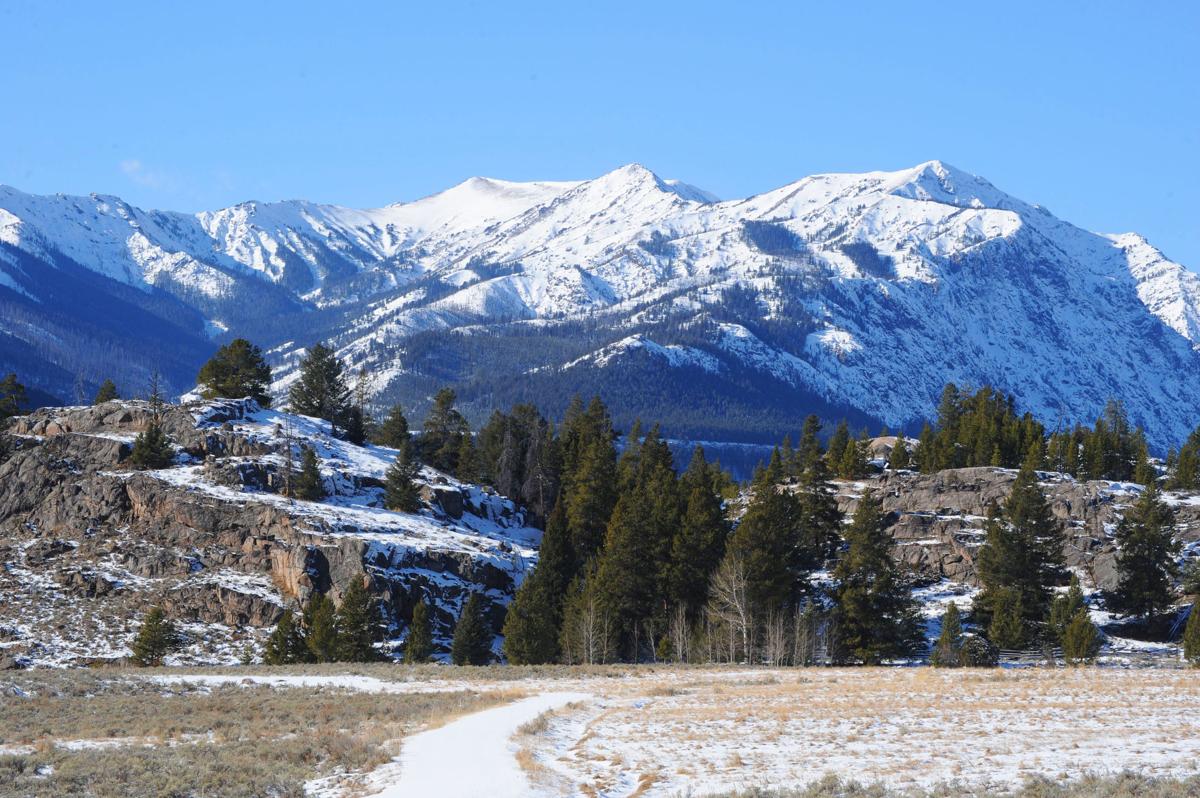 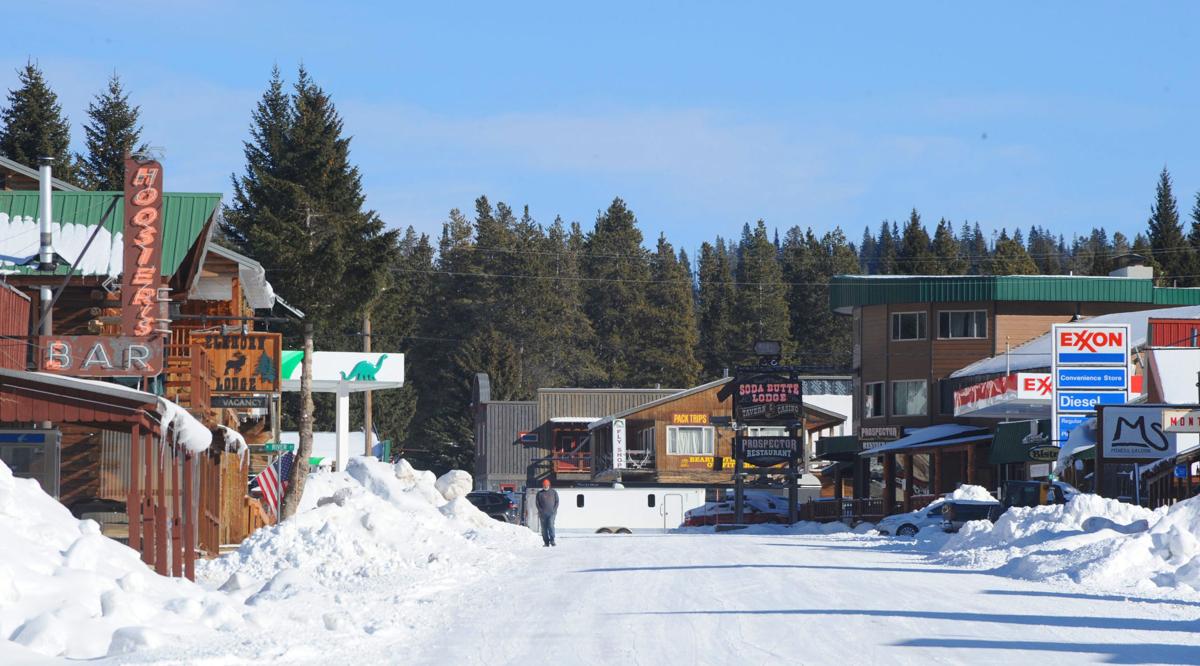 While other areas saw little snowfall in November, Cooke City still managed to pile up snow along its streets. 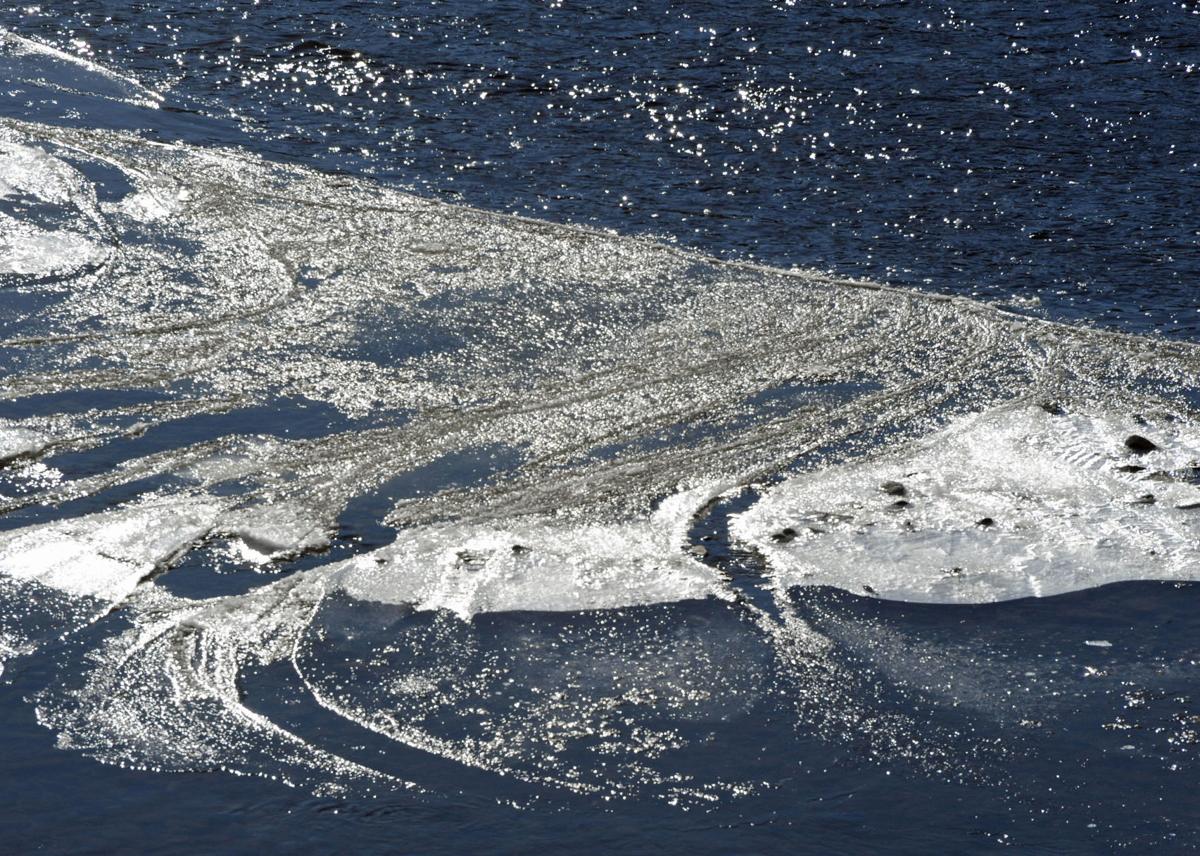 Only a thin layer of ice was building up along the shores of the Yellowstone River in November. 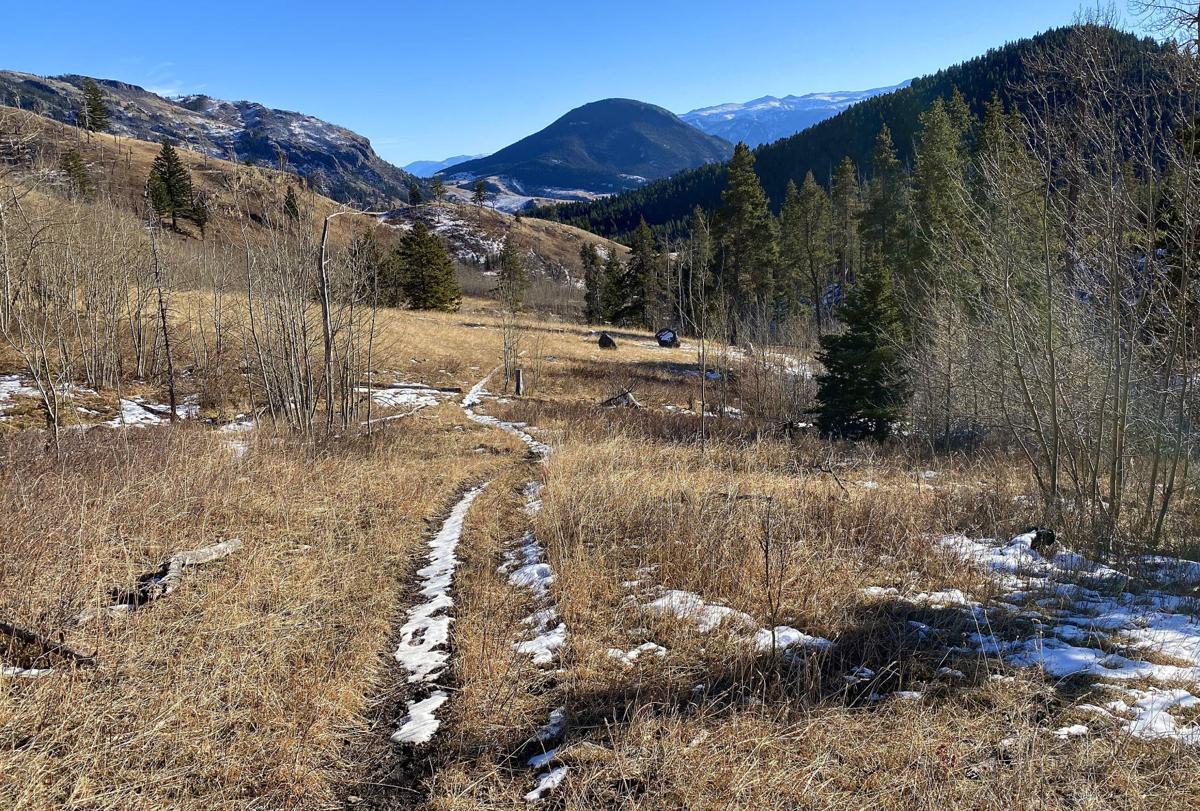 Even at an elevation of 6,400 feet, there was little snow in the foothills of the Beartooth Mountains up Lodgepole Creek on Dec. 5.