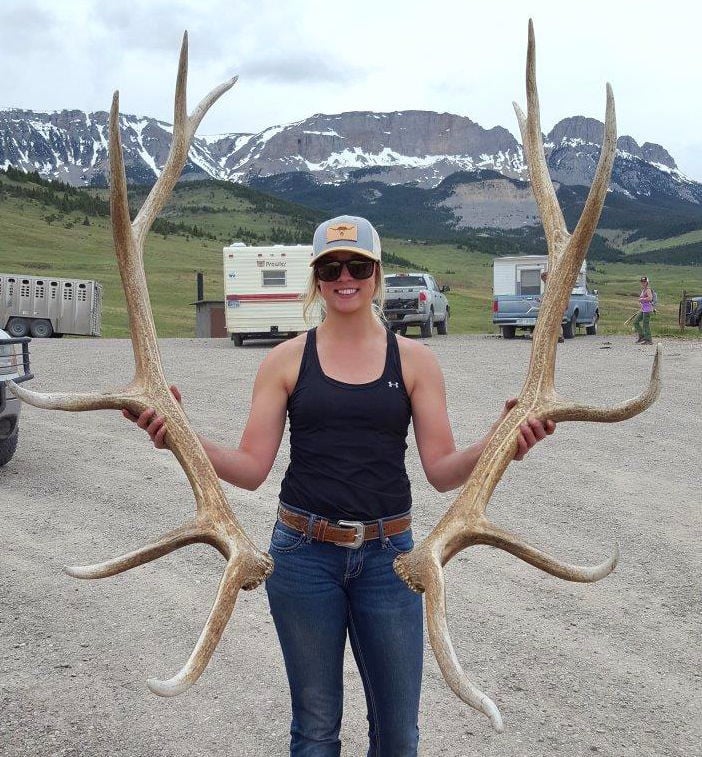 While on horseback, Savanah Swanson of Anaconda found a matched set of elk antlers on the Sun River Wildlife Management Area. 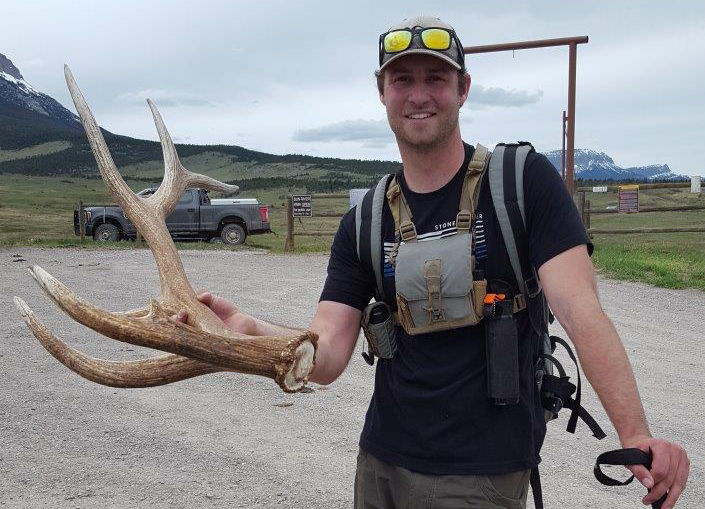 Colby Adamek of Bozeman shows off the elk antler he found hiking on the Sun River WMA.

What is it about shed antlers that annually turns grownups into raving lunatics?

Apparently, there is a lure, a special power that emanates from shed antlers: those racks of bone that each spring and early summer grow on the heads of male members of the deer family, fall off in the winter, only to regrow and repeat the cycle.

How else to explain the crowds of people that show up each year for the noon, May 15 opener at Fish, Wildlife & Parks wildlife management areas. The granddaddy of which is the Sun River WMA west of Augusta against the Rocky Mountain Front.

This year, a middle-of-the-work-week opener, about 800 people ran, drove, scampered, rode and generally yahooed their way across the WMA’s hills leading up to the mountainous Front, looking for antlers shed about two months earlier

It’s easy to guess those “horn hunters” are mostly young men wanting to possess the headgear that a lusty bull elk used as weapons and status symbols indicating male supremacy.

Except the antler-seeking crowd also consists of women, children, grandparents, entire families, Montana residents and nonresidents. All for antlers, mostly from elk, but other species, too, like deer and moose.

The annual antler cycle starts in March when most mature bull elk shed both their antlers, which usually weigh about 30 pounds total, occasionally more. Because antlers on an adult male take about five months to grow, the new antlers start sprouting in a week or two.

Antlers are the only mammalian appendages capable of complete regeneration. Some amphibians can have portions of their bodies severed and regrow the lost limb or tail. Not so with mammals, except for antlers.

Though often referred to as horns, antlers are different from horns, but both are found on native Montana mammals.

Antlers grow only on the male members of the deer family, except for caribou in which both sexes grow them. Horns are found on both sexes, such as bighorn sheep, bison and mountain goats.

Antlers are shed annually and often branch when regrown as the animal ages. Horns are permanent and usually dagger-like. Always the exception, pronghorns shed and regrow a sheath-like covering each year.

Not all deer or elk grow enormous antlers. It’s all about age, genetics and nutrition.

The older the buck or bull, the larger the headgear, to a point. Bull elk usually grow their first set of antlers, called spikes, when they are a year-and-a-half old. A 2-year-old may have three to six points on each antler, and a mature bull of 7 and older will often have six points or more.

However, from age 3 to 10, the antlers stop growing longer and adding points, tending to become thicker and heavier. If a bull grows older, his antlers decline in size and mass.

Genetics determine the form of antlers while nutrition dictates their size.

Humans have always prized antlers for weapons, tools and ornamentation. Today, antlers are worth money, too.

One antler from a mature bull elk can bring $150 or more, depending on the current price per pound. For a well-formed matched set, add another zero.

Despite the money, many horn hunters just want to possess an antler or two for the mystique, the reverence or just plain fun.

Throw in a sunny, pleasant day with no injuries, and everyone seems happy. Even those who go home empty-handed.

'Hard to put one value': FWP auctions off confiscated hides and horns

Hundreds of antlers, horns and hides piled high outside Montana Fish, Wildlife and Parks’ Great Falls office drew bids ranging from a few dollars to the thousands on Saturday.

Depending on your point of view, the summer is either beginning, half over or nearly done.

While on horseback, Savanah Swanson of Anaconda found a matched set of elk antlers on the Sun River Wildlife Management Area.

Colby Adamek of Bozeman shows off the elk antler he found hiking on the Sun River WMA.

At noon, each May 15, the gates open and people on foot, horseback and in vehicles take off across the Sun River Wildlife Management Area searching for shed elk antlers.