The U.S. Army Corps of Engineers is seeking comment on its proposal to help states along the upper Missouri River monitor for aquatic invasive species.

If approved, the agency could pay half the cost of certain programs within five states, including Montana, Wyoming, North Dakota, South Dakota and Nebraska.

The Corps participation in the regional coordination efforts could include everything from expanding the number of locations or hours of operation of AIS inspection stations, to adding canine detection, increasing public awareness, constructing site improvements, as well as augmenting existing monitoring efforts and response planning efforts, according to the agency’s draft environmental assessment.

“This won't change how we operate,” said Liz Lodman, information officer for the Montana Department of Fish, Wildlife & Park’s Aquatic Invasive Species Program, in an email. “FWP is eligible for (Water Resources Development Act) funding from both the Columbia Basin and Missouri Basin. We'll continue to use Columbia Basin funds.”

Lodman said the big benefit of the Corps infusion of cash is that it will provide resources to central states so they can boost their AIS efforts.

“Many of the central states have programs that are just developing, and this will help with the protection of those states as well as Montana,” she said. “When another state improves their inspection program it helps all the states.”

The Corps estimated deferring any AIS infestation for 50 years in the Upper Missouri saves more than $57.7 million compared to an investment of $5.9 million on the inspection station program over the same time period.

“The proposed action is needed because the risk of the spread of AIS to rivers and Corps reservoirs in the (Upper Missouri River Basin) is high, and the introduction and establishment of AIS (particularly dreissenids) has the potential to cause damage and increased operation and maintenance costs to water-related infrastructure, recreation and the ecosystem,” the Corps’ EA stated.

Dreissenids are quagga and zebra mussels, nonnative species that were first discovered in the Great Lakes in the 1980s, likely carried there from Europe or western Asia in the ballast water of commercial ships. The mussels have few natural predators and are prolific. Since they can live out of water for two weeks, they are easily transported from an infected waterway by boats.

Montana launched its AIS program in 2004 under the direction of Fish, Wildlife & Parks and in partnership with other state, tribal, federal and private groups. The main goal has been to establish boat inspection stations to ensure watercraft infected with mussels or weeds aren’t allowed into the water. When infestations are found, the boats may be quarantined or decontaminated.

As of 2019, the state had conducted more than 515,000 inspections detecting more than 80 watercraft infected with mussels and hundreds of others carrying invasive plant species. All watercraft passing through the state are required to stop at the inspection stations.

According to the Corps’ EA, in 2019 in the five Upper Missouri River Basin states, there were more than 181 stations that conducted 178,300 inspections and at least 35 watercraft identified with evidence of mussel contamination — 16 in Montana, 19 in Wyoming.

The annual costs for operating all of the state stations is more than $4 million, with Wyoming spending about $390,000 annually and Montana more than $825,000.

These costs pale in comparison to the Corps’ estimates of the potential effects of a mussel infestation in the Upper Missouri River Basin. For hydropower facilities alone the invasive species could require $11.7 million a year for maintenance as well as lead to possible hydropower outages. Water supply and treatment facility costs could also rise, depending on the severity of the infestation.

Other costs associated with AIS infestations are increased maintenance for boaters and impacts to beaches where the sharp mussel shells can injure beach goers. Mussels also have the ability to modify water quality which can harm fish. A full infestation in the region could add as much as $99.6 million in operation and maintenance costs, the agency estimated.

Public comments on the draft EA will be accepted until March 2. For more information log on to https://go.usa.gov/xs2TX.

Barb Beck, Region 5 supervisor for the Montana Department of Fish, Wildlife & Parks, has approved a plan to drain the lake in September 2021 to kill invasive, nonnative Asian clams.

Aquatic invasive species are like the COVID-19 of streams and lakes. It takes only one watercraft to become a super spreader, introducing an i…

A 14-year-old trailer that has been used to house an AmeriCorps volunteer at Chief Plenty Coups State Park is in need of replacement.

Due to the widespread nature and easy availability of moss balls, FWP does not believe it will be able to track individual sales to customers.

Water flows into reservoirs along the Missouri River above Sioux City, Iowa, were well-below average in February, and the 2021 runoff forecast… 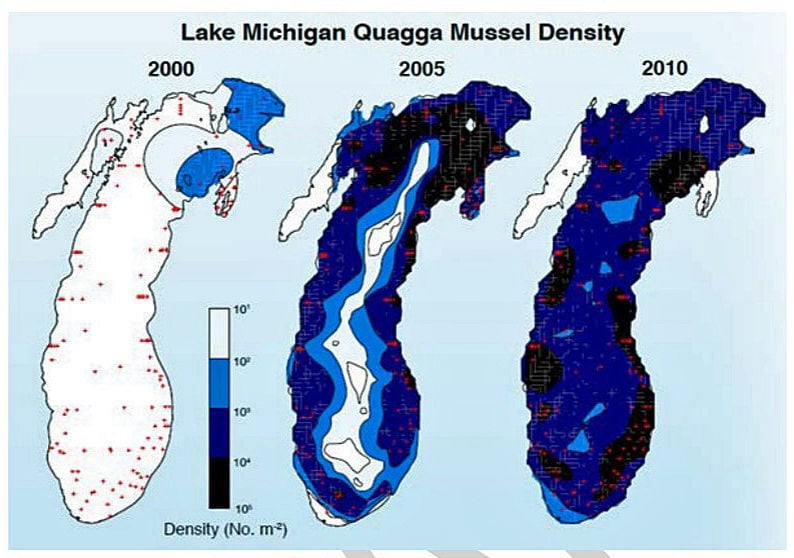 This graph shows the spread of aquatic invasive species across Lake Michigan between 2000 and 2019. 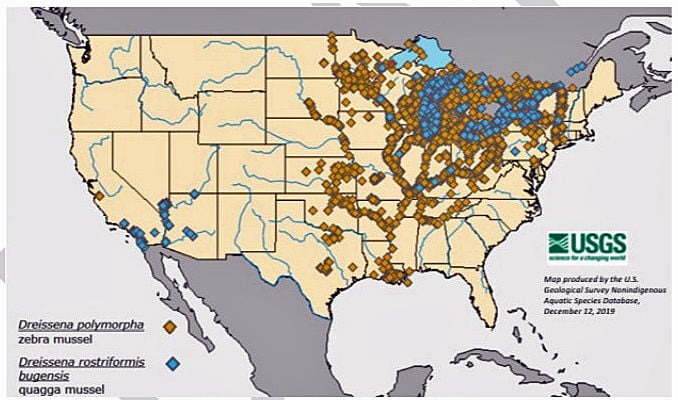 States infected by quagga and zebra mussels are concentrated in the eastern half of the United States.