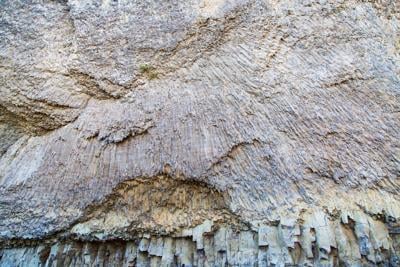 Yellowstone Caldera Chronicles is a weekly column written by scientists and collaborators of the Yellowstone Volcano Observatory. This week’s contribution is from Behnaz Hosseini, Ph.D. student, Madison Myers, assistant professor, and Roberta Spallanzani, post-doctoral researcher, all in the Department of Earth Sciences at Montana State University.

In the plot of many classic science-fiction novels, like Mary Shelley’s "Frankenstein" and H.G. Wells’ "The Invisible Man," a curious scientist is conducting a ground-breaking laboratory experiment that goes awry. While Yellowstone scientists aren’t up to any questionable laboratory activities like those, they do often conduct challenging and meticulous experiments that are foundational to our understanding of many volcanic phenomena. But, you ask, what exactly do geologic experimentalists do, and how does their work help us understand volcanoes like Yellowstone?

The goal of experimental volcano research is to recreate our observations of natural systems in the laboratory under controlled conditions. This can include designing experiments that mimic lava flow rate due to changes in internal properties like viscosity (resistance to flow). The results of these experiments, when combined with natural observations, can be invaluable for understanding the hazards posed to communities and infrastructure in volcanically active regions like Hawaii. Another example is experiments designed to replicate the dispersal of volcanic ash following an explosive eruption, where scientists can closely examine how ash might clump due to interaction with water, trigger volcanic lightning, or affect the engines of planes in flight.

Yet another type of experiment allows us to interpret the pressures and temperatures at which magma is stored beneath the surface. These experiments require special instruments that can simulate the high pressure and temperature conditions in the crust of the Earth (up to 10s of miles) all the way, in some cases, through the deep mantle (100s to 1000s of miles). How does it all work? Well, scientists typically collect volcanic rocks that they want to study, crush and melt them at a range of pressures and temperatures inside an experimental apparatus, and then quickly cool the material to examine the products. When the experimental products contain minerals that are similar in composition to what is observed in natural rock samples, voila! We then have an idea of the pressure-temperature conditions of magma storage.

Applying this technique to Yellowstone, researchers have learned that magma that produced some of the youngest rhyolitic eruptions was stored in the upper crust, between 3–6 kilometers (~2–4 miles) depth, and at temperatures between 700–800 degrees Celsius (1290–1470 °F). These crustal depths are similar to the shallower end of current storage estimates for small amounts of melt imaged using seismic tomography and are reasonably consistent with other estimates for rhyolitic volcanism along the Yellowstone hotspot track.

Who knew experiments could be so versatile and informative, allowing volcanologists to closely investigate everything from magma storage beneath the surface to lava flows at the surface? Like all great things, volcano experiments require time, tremendous patience, grit and creativity. Ultimately, though, these experiments are invaluable in their ability to scale down the complexities of real volcanoes to a controlled laboratory environment, allowing scientists to make new, fascinating observations about volcanic systems like Yellowstone.

In other words, volcanologists can learn a lot by torturing rocks. How’s that for a mad scientist story?

Caldera chronicles: A plan for monitoring the Yellowstone volcanic system