“It was crazy,” said Brad Orsted, a professional photographer who lives in the old mining town of Jardine, near Yellowstone National Park’s northern border. “It was not uncommon to see a dozen to 20 grizzlies out there.”

“Out there” was the upper end of Tom Miner Basin, a long drainage that runs close to the park’s northern border, ending at the rocky spine of the Gallatin Mountains. It’s just one of many places Orsted has staked out while spending almost every day of the year in the Greater Yellowstone Ecosystem searching for unique photos.

“You have to go every day,” he said. “If you don’t go, you’ll check Facebook and your buddy has gotten the shot.”

As bears have become more visible in the GYE — whether it’s due to increasing populations or their search for different food sources — social media has helped photographers and the public flock to watch them. As a result, bear managers in Yellowstone and the surrounding forests are confronting a challenging landscape where keeping humans and bears separated is becoming increasingly more difficult.

Yellowstone officials are all too familiar with bear jams. The traffic jams caused by bear sightings result in tourists clogging the park’s narrow two-lane roads with hastily parked cars as they rush out with a camera. Park officials call such wildlife-tourist encounters a “considerable management challenge.”

There were “240 roadside traffic jams caused by visitors stopping to view habituated bears” in the park in 2018, according to the park’s recently released report on bear activities. “Thousands of visitors viewed bears at these bear jams. Park staff responded to 180 (75%) of the grizzly bear jams and spent 1,066 personnel hours managing grizzly bears.”

With visitation to Yellowstone close to 4 million people a year, the park’s bear managers are concerned that grizzly and black bears may become increasingly habituated to people. When that happens, the bruins will be more likely to hang out where they can be seen causing even more bear jams. As bears become more at ease with humans park officials worry that visitors may get much closer to the animals. Park regulations require tourists to stay 100 yards from bears and wolves.

To keep bears and humans separated, “biologists posted bear warning signs at 15 locations and temporary trail and/or area closures at 21 locations,” according to the Yellowstone bear report. “In addition, they removed 87 large mammal wildlife carcasses likely to attract grizzly bears from visitor use areas.” Biologists also “hazed grizzly bears out of human use areas 36 times, including from park developments five times and primary roads 31 times.”

Humans’ attraction to bears is nothing new in the region. In the early 1900s park staff would dump kitchen refuse from park restaurants in front of bleachers so tourists could see and photograph bears. Some black bears became so at ease around humans that they would approach cars and beg for food. Black and white photos of such encounters were a common part of tourists’ photo albums in the 1950s and 1960s.

Although Yellowstone’s staff works hard now to ensure bears don’t see humans as a food source, some tourists still seem to lose all sense of personal well-being when presented with the opportunity to photograph or see a bear. So it should be no surprise that when word of the grizzly bears’ concentration in Tom Miner Basin became better known, folks of all stripes showed up.

“For a lot of people it was the first grizzly they were seeing in their life,” Orsted said.

But the congregation of bear watchers soon morphed into an impromptu tailgate party, with picnickers lighting their charcoal grills alongside the county road and one who joked with Orsted that he was there for the beers, not the bears. The bear enthusiasts also left trash behind.

“It was a little bit of a road show on weekends,” Orsted said.

The concentration of bears in Tom Miner has been driven by a bloom of caraway, a plant native to Asia, North Africa and Europe. How it arrived in the Tom Miner Basin’s hay fields is unknown, but it spread quickly and soon provided grizzlies with an alternative food when other sources — from whitebark pine seeds to moths and berries — are in short supply.

“It’s an annual event, but some years the numbers are higher,” said Kevin Frey, a bear management specialist for Montana Fish, Wildlife & Parks based in Bozeman. “If other food sources are in short supply, more bears will show up.”

“It’s not unusual to see 10 bears at a site,” Frey said, feeding on berries, carcasses or moths. The bears have a good memory for where food is available, with one grizzly trekking from the Yellowstone Lake area to the Gallatin each year to dine on pine nuts, he added.

Now bear managers are being routinely tasked with how best to keep bears, and the humans longing to photograph or see them, safely separated.

In Tom Miner Basin the gathered grizzlies included two female cubs orphaned after their mother was shot by a hunter in 2015. Orsted, in collaboration with Never Give Up Films, produced a video about the bears. In 2019 Montana Fish, Wildlife & Parks reported it had killed the female cubs after they had wandered north into the Paradise Valley where they were seen raiding garbage cans and apple trees in the fall of 2018.

The cubs may have survived as long as they did because of the protection provided by finding food close to the human entourage gathered along the Tom Miner Basin Road, a close proximity the adult bears — which are known to kill cubs — felt less comfortable encroaching upon.

“It was their only option,” Orsted said of the cubs. “They made it work.”

Did such nearness to humans make the cubs less concerned about close contact when they wandered from Tom Miner, a move that led to their deaths?

This summer a sow grizzly wandered alongside the highway over Wyoming’s Togwotee Pass creating a bear jam. It may have been searching for a lost cub. David Mattson, the Livingston-based co-author of the blog Grizzly Times and a frequent critic of grizzly bear managers, suggested in a post that a team of volunteers be created to deploy to such crowding situations. The volunteers could employ the same bear separation tactics already being used successfully in Yellowstone and Grand Teton national parks.

Orsted said that in the past he took on the task of bear volunteer in the Tom Miner Basin, trying to educate the public about bears while they were a captive audience.

“We’d get a lot of hunters up there with no idea of the concentration of grizzlies in the area,” he said. “Most of the hunters I know in Gardiner won’t touch that area.”

In addition to dispersing bear knowledge, Orsted would also encourage the visitors to be respectful by not littering, slamming their doors, setting off their car alarms so the bears would raise their heads or blocking the road with their parked vehicles.

“Just treat it like it was your neighborhood,” he advised.

In 2018, biologists completed a two-year DNA-based study of black bear density in northern Yellowstone. The study was a collaborative effort between the Bear Management Office, Montana State University, and the Interagency Grizzly Bear Study Team.

Biologists collected 3,874 samples of bear hair from 26 scent-baited snares and 217 bear rub trees. Laboratory extraction of individual genotypes identified 144 black bears (70 males and 74 females) and 35 grizzly bears (21 males and 14 females). Further analysis will be conducted from these results to estimate the abundance and density of black and grizzly bears in Yellowstone.

Resource selection modeling of spring habitat use indicated black bears are selecting habitats with high vegetation biomass. Black bears in northern Yellowstone did not appear to make directed movements to known elk calving areas to prey on newborn calves, but rather consumed calves opportunistically encountered throughout their home ranges.

Grizzly bears were delisted from Threatened Status in June of 2017. However, in 2018 a federal judge restored protections under the Endangered Species Act.

There were 1,627 bear sightings reported in YNP in 2018. These reports included 892 observations of grizzly bears, 665 observations of black bears, and 70 reports where the species of bear could not be determined.

On Aug. 25, 1870, when the Washburn-Langford-Doane Expedition camped at the mouth of the Gardner River, finding enough grass for their horses …

The new week is bringing more snow and cold to Montana, Wyoming and Colorado.

LIBBY — A grizzly bear that attacked a wildlife biologist last year was recently trapped and relocated in Montana.

Bridge over Yellowstone River deteriorating; comments sought on replacing it

The concrete deck, sidewalks, and parapets have deteriorated so badly on the Yellowstone River Bridge that the National Park Service is propos…

More roadwork planned in Yellowstone in 2020; travelers should expect delays

The U.S. Forest Service and U.S. Fish and Wildlife Service in documents filed Friday say the decision to allow using bait to attract bears should continue to be made by the states. 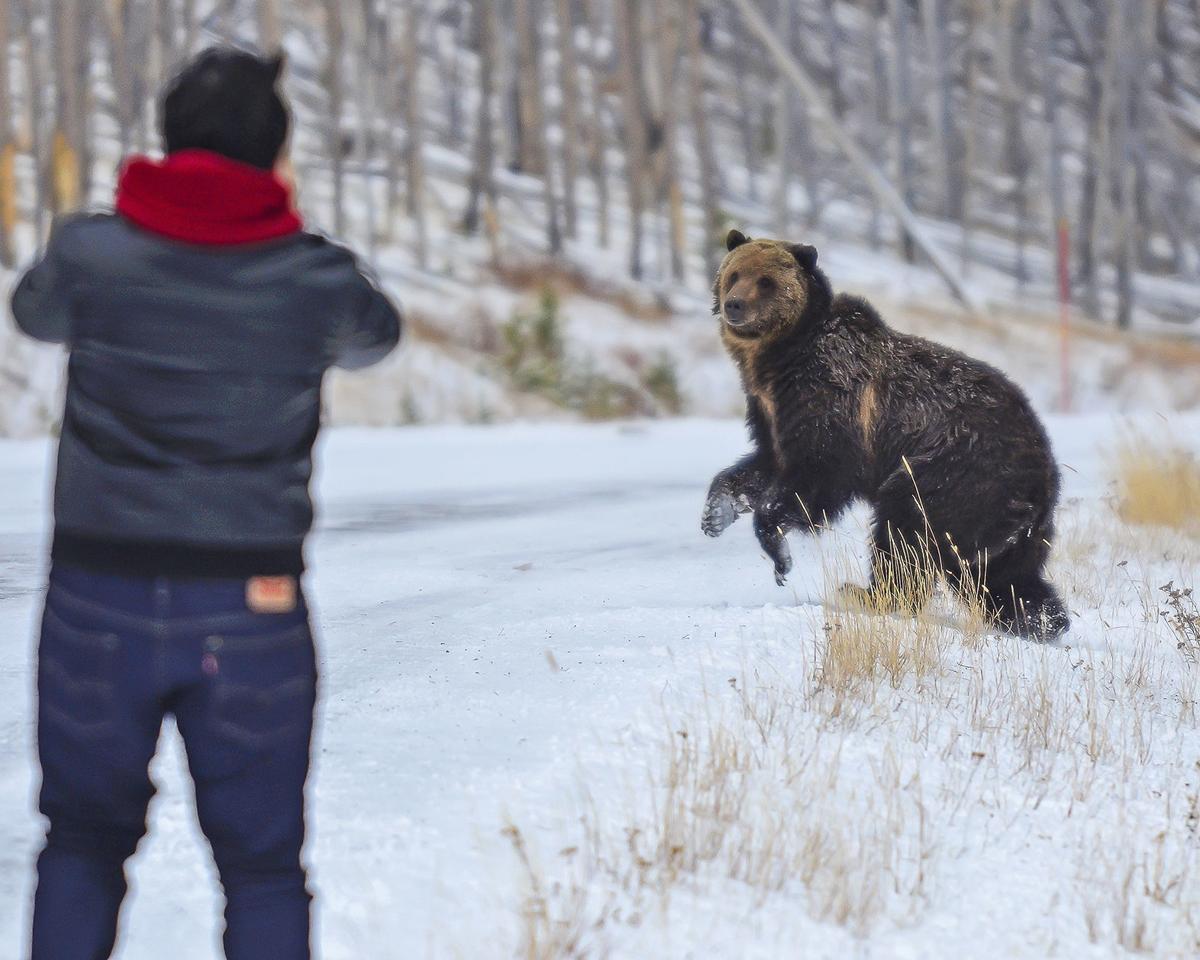 Interactions between bears and tourists have increased in Yellowstone National Park and in the forests surrounding the region. Keeping them separated continues to be a challenge for bear managers.

In this historic Yellowstone photo bears gather around a feeding area that allowed tourists to see bears. 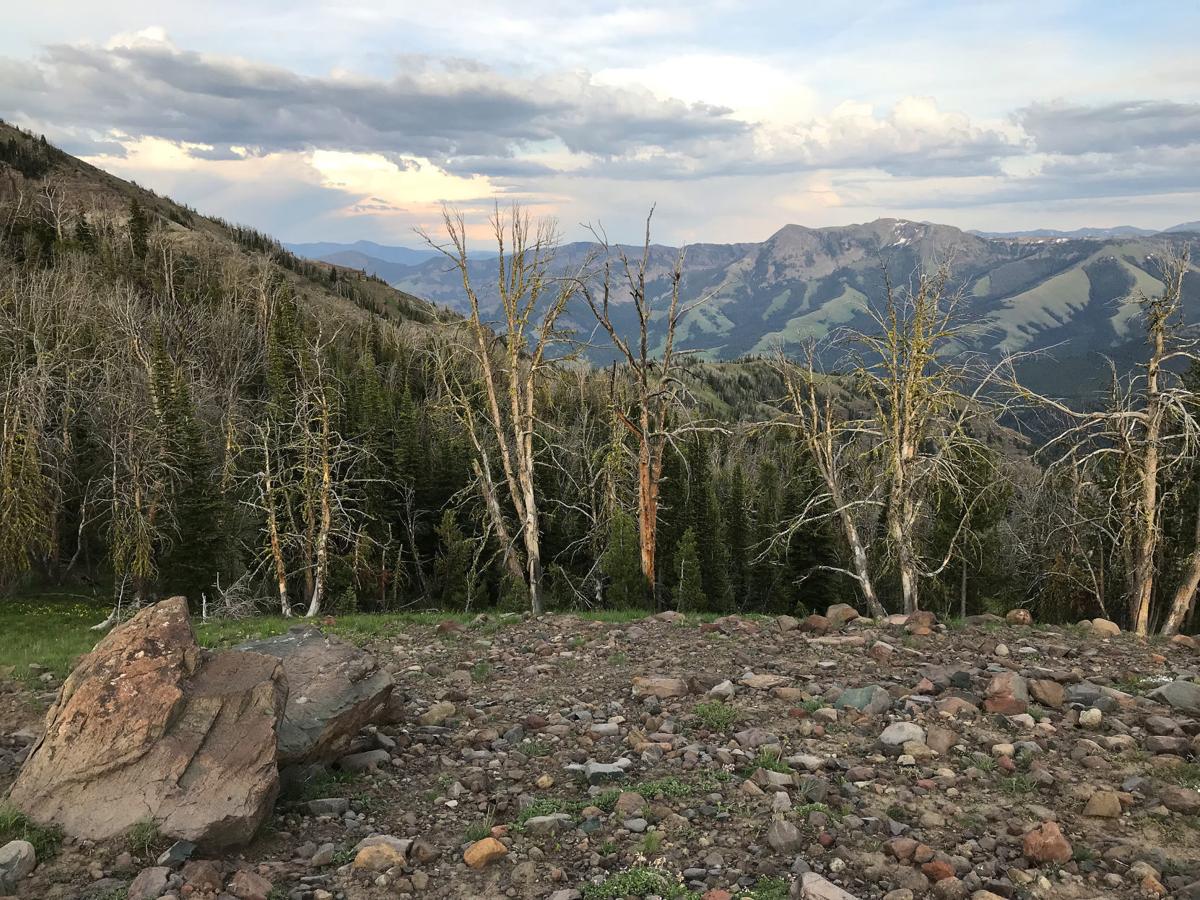 A ghost forest of dead whitebark pine lines the sides of Ramshorn Peak. This view is looking back toward Tom Miner Basin. Whitebark pine seeds are a high-protein food source for bears. 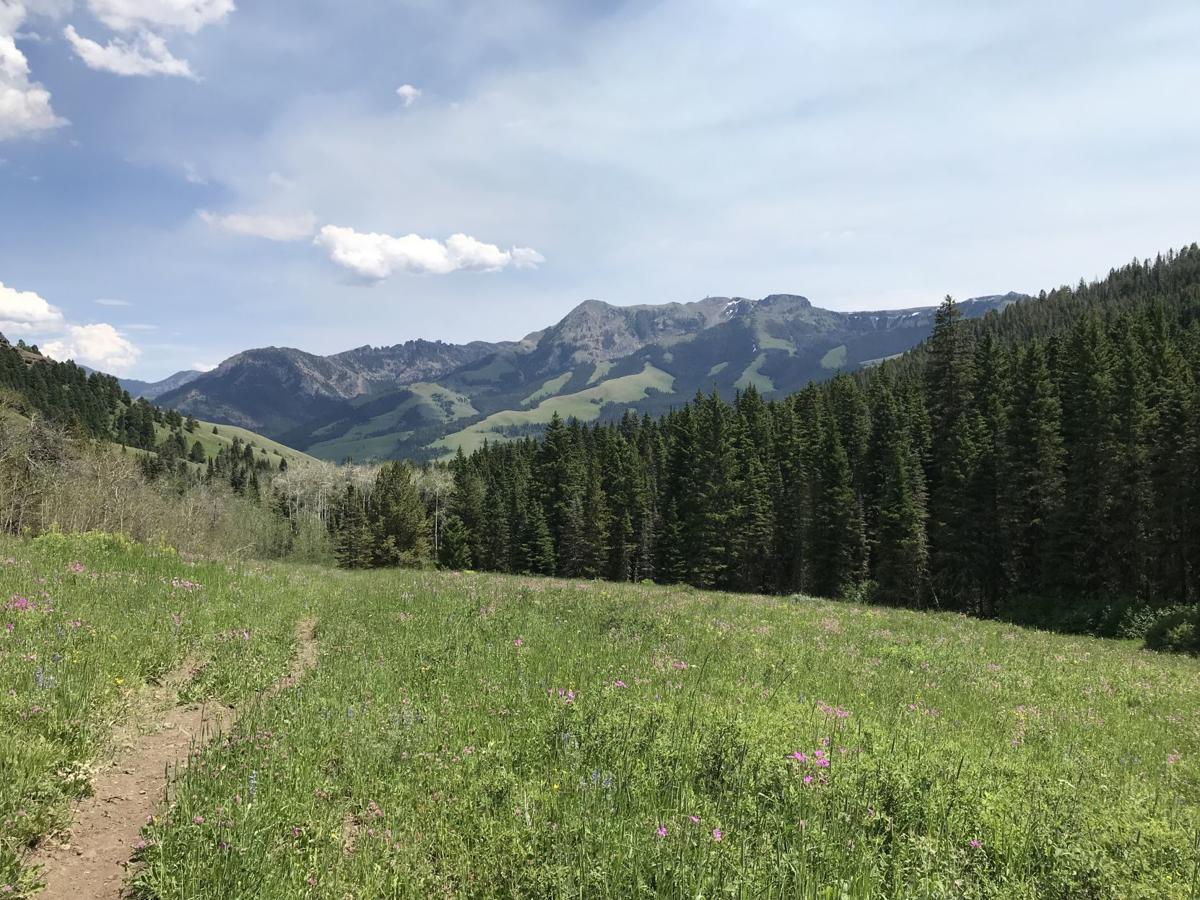 The Tom Miner Basin provides a lush and wild landscape for bears along the northern border of Yellowstone National Park. 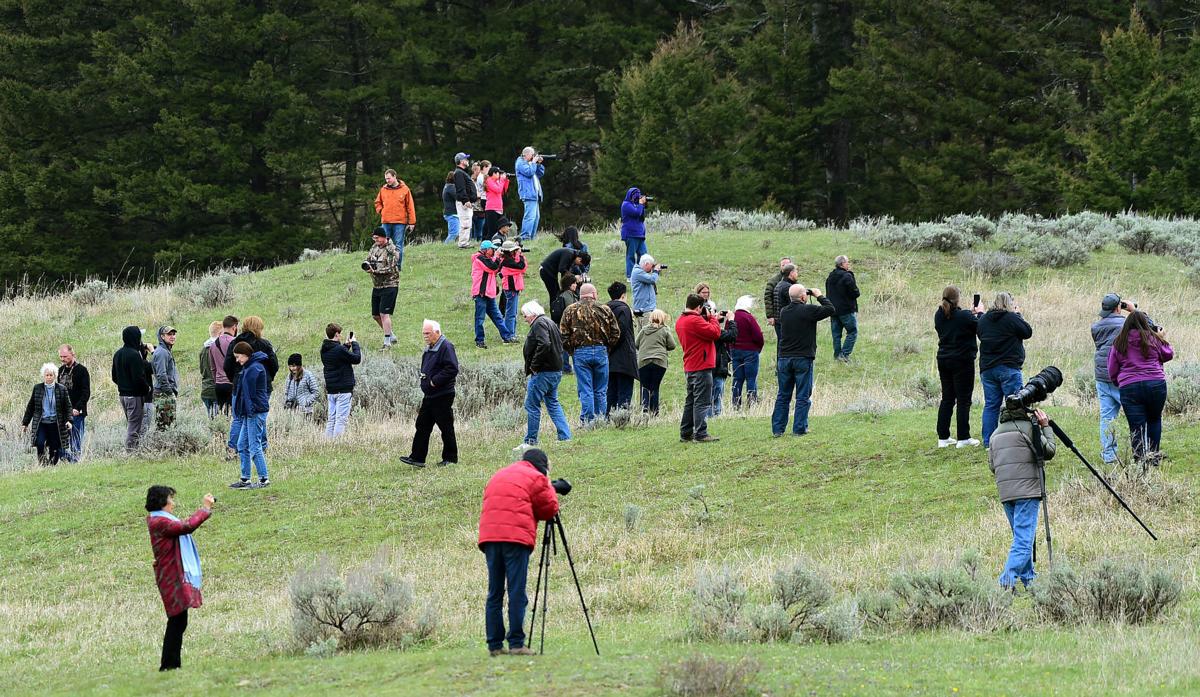 Tourists race to photograph a black bear between Mammoth and Tower in Yellowstone National Park on a weekday in late May. 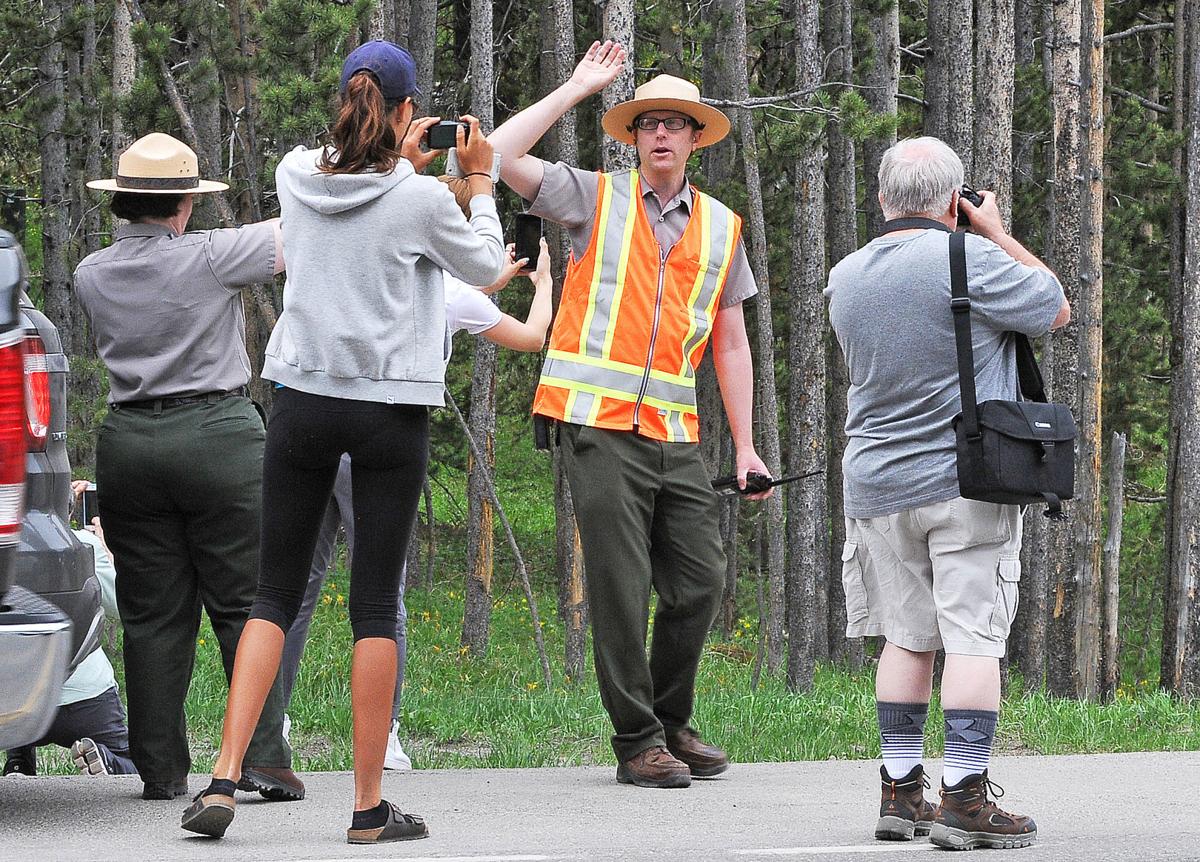 Yellowstone National Park uses seasonal hires to help with tasks like keeping tourists a safe distance away from bears.