When Michael Daus uploaded the video he shot of a grizzly bear attacking a bison during a brutal struggle in Yellowstone National Park, he had no idea the response would be so huge.

“This was not originally put together with any expectation of wider exposure,” he noted in an email.

The video, posted on YouTube, now has more than a quarter of a million views. Daus, whose popcorn business has earned him the name chief popperating officer, has received calls from media across the country. The video was most recently uploaded to an Apple site further boosting its exposure. He estimated a million people have seen the footage. Now he’s talking to a company about licensing the video.

“I would never imagine that in my lifetime,” he said via phone from his Jackson, Wyoming, home.

Along with the exposure, however, have come the internet trolls who criticized his spelling or choice of music.

The video has the unassuming title of “Our Family Trip to Yellowstone, Bear vs. Bison,” and is dated May 31. It was shot around 2 p.m., a time of day not known for great wildlife viewing. Dawn and dusk are usually when animals are more active.

The video starts with images of the Lower Falls in the Grand Canyon of the Yellowstone, “A Day Filled With Beautiful Scenery and Wildlife,” Daus’ text noted, before the film fades to a shot of Old Faithful geyser erupting, a photo of Daus and his wife, Shawn, and images of bison walking down the road with their young calves.

“All that was missing,” the video noted, “were the crowds” as an image of his smiling 9-year-old twins Vivian and Holden is shown. At 36 seconds into the five-minute video, a photo of a grizzly crossing the highway behind their car, shot using the rearview mirror, sets the tone for what’s to come.

“Viewer Discretion Advised,” the video warns in white letters on a black screen. “Warning: Some may find the following video disturbing.”

Then in “Star Wars” introduction fashion, with the words scrolling back into darkness, Daus writes that his family saw a grizzly bear as they turned into the parking area for the trail to the Grand Prismatic Spring Overlook Trail. On the way back, as they reached the parking lot, the grizzly they had seen earlier was attacking a bison. “The gloves are off!” his film reads.

“SPOILER ALERT: one winner one looser (sic) and Some animals WERE harmed FATALLY!”

At about 1:11 minutes into the video a young bison is shown chasing a grizzly bear near the path the family had just walked. The path starts at a parking lot on the east side of the Firehole River in the Midway Geyser Basin, only minutes north of Old Faithful.

At first it seems the bison may have the upper hand. The bison charges and the grizzly retreats less than 10 yards before turning to face its opponent. The bison closes the distance and chases the grizzly again as they disappear behind nearby cars.

When the video picks up at about 1:29, the grizzly is standing behind the bison biting down on its spine just above its hindquarters. Shaking its head and grabbing on with its finger-long claws, the bear shuffles sideways as the bison turns.

Daus can be heard on the video telling his family to stay close and be ready to go back to the car as the attack continues “not at a safe distance,” he said. “Fortunately the bear and the bison were very engaged with each other.”

Yellowstone National Park requires all visitors to maintain 100 yards between themselves and bears or wolves.

The bear keeps shaking its head back and forth as the bison slowly wanders past a row of parked cars. Eventually the bison walks onto the paved trail leading to a bridge, crosses it and wades into the Firehole River, all while the bear follows along walking on its hind legs, continuing to try to bring the bison down by biting its back.

Undeterred by the water, the grizzly maintains its tight hug on the bison, occasionally spitting out tufts of the bison’s fur, as it wades back across the river. Eventually the animals are seen downstream about waist deep in water before the video cuts to the bison lying down in the water close to the riverbank. The grizzly briefly leaves the bison, walks onto the shore and looks around before returning to its prey which is still not dead. In the end the bear is seen standing atop the bison tearing at its flesh.

The video closes with Daus’ note that the incident played out over the course of 17 minutes but was edited down to five minutes.

Yellowstone bear biologist Kerry Gunther said he has never seen anything like the bison-bear encounter during his long tenure in the park. Judging by the video, he said the bison appeared to be a sickly yearling. Usually, bison are protective of each other when they are in a herd, Gunther noted. Adults will form a wall with their calves behind them.

“Most of the time if the prey species stands its ground the bear will back away,” Gunther said.

“That bison was bigger than the bear,” he said.

The park’s staff doesn’t see bears kill bison very often, Gunther said, but it probably happens more often than known because such kills aren’t usually so visible. Gunther said he once saw an adult cow bison killed by a big male grizzly. He’s also seen bison carcasses with bite marks on their spines. One time he saw a grizzly chase off wolves that were killing a bison. The bear finished the wolves’ work.

“We had a collared bear that would occasionally kill adult bison,” he said. “So some bears get somewhat proficient at it.”

Veteran Gardiner-based wildlife filmmaker Bob Landis said such drama plays out in Yellowstone National Park all the time, it’s just unusual for people to witness. A few days ago, he noted, a grizzly killed an elk calf in the sagebrush close to Mammoth Hot Springs, the park’s headquarters.

“The Park Service got on that really quickly,” Landis said, firing a cracker shell at the bear to move it away from the populated area.

Landis laughed at Daus’ luck in recording the unusual video.

“I would have loved to have been there,” he said.

Landis once filmed a Yellowstone grizzly trying to kill a bison calf before being chased off by the cow. In 1973 he saw a grizzly sow bring down a bull caribou injured by wolves in Alaska. The sow faced the bull and stuck its head between the caribou’s antlers to bite down on its neck. The bull eventually died after the two stumbled into a stream where the grizzly could drown the caribou. The footage was a “break out” for Landis’ career, as well as providing a lesson in filming.

Another filmmaker at the same site had better equipment that allowed him to shoot longer. The colleague also had his wife shooting wide-angled shots. When it was spliced together the footage earned the cameraman $20,000 when exclusive rights were sold to ABC television.

“That’s why I lug around 50 pounds of camera gear instead of half-a-pound,” he said.

ABC wasn’t happy when they found out Landis and another filmmaker had captured the same scene, he noted and chuckled.

The Yellowstone grizzly was allowed to feast on the bison it worked so tirelessly to bring down until the next day. That’s when the park’s staff collected the carcass and moved it to a dump site to keep the predator and people separated. The dump is not fenced, allowing scavengers to eat the dead animal. Roadkill in the park is similarly moved to such sites to keep predator food sources away from tourists.

Daus said several people have told his children how unique the scenario they witnessed was, a once-in-a-lifetime experience.

“I think everyone was excited,” he said of his family.

Since shooting the video he’s also marveled at how fortunate he was to be in the right place at just the right time. Photographers and filmmakers like Landis will stake out sites for hours and sometimes days to capture the footage they want. They invest in long lenses and expensive cameras. Daus used his cell phone.

“To have it happen close by and relatively safe for the circumstances we were in, that’s a treat,” Daus said.

Such ferocious struggles may occur daily in the wild, but to see it so close, and to realize it will end in the bison’s death, can be disturbing to anyone not used to such animal drama.

“For the people in their cars in the parking lot it was quite the show,” Gunther said.

“Nature is not always pretty.”

Two of Wyoming’s Yellowstone National Park gateway communities are budgeting for a drop in sales tax revenues of between 20 percent and 50 percent for the fiscal year beginning in July, underscoring the uncertainty facing pandemic-plagued tourism revenues.

The troubled nonprofit partner of Yellowstone National Park, Yellowstone Forever, announced Saturday that it was further reducing its staff an…

Bear bites camper through her tent near Big Sky

A woman camping was bitten through her tent by a bear on private land near a popular trailhead outside Big Sky, Montana Fish Wildlife and Park…

A Missouri woman received a minor scratch to her thigh after being knocked down by a protective mother grizzly bear in Yellowstone National Park on Monday.

When in Yellowstone, socially distancing yourself from bison is key to a safe visit

Safe social distancing takes on a different connotation for visitors to Yellowstone National Park during July and August — when bison are in their mating season.

A motorcyclist has survived a violent attack by a bison in the Black Hills of South Dakota, sheriff's officials said.

For the second time this year, a visitor to Yellowstone National Park has captured astonishing video of a grizzly bear bringing down large prey.

Bears need baths too, but not to wash dirt from between their hairy toes. Instead, taking a dip in a cool pool of water helps the large, furry… 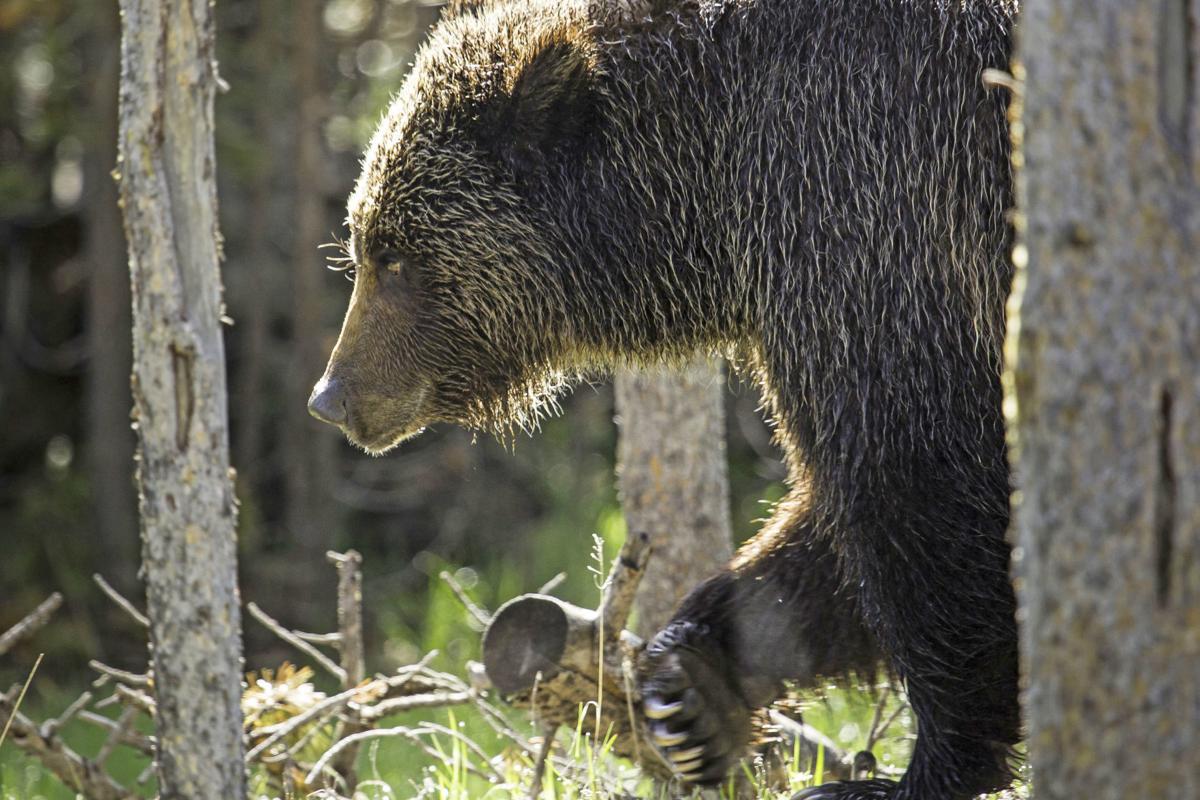 A full-grown male grizzly can top the scales at 600 to 700 pounds, but rarely attempts to kill prey as large as bison. The grizzly that brought down a young bison in video shot by a Wyoming man weighed about 200 to 300 pounds. 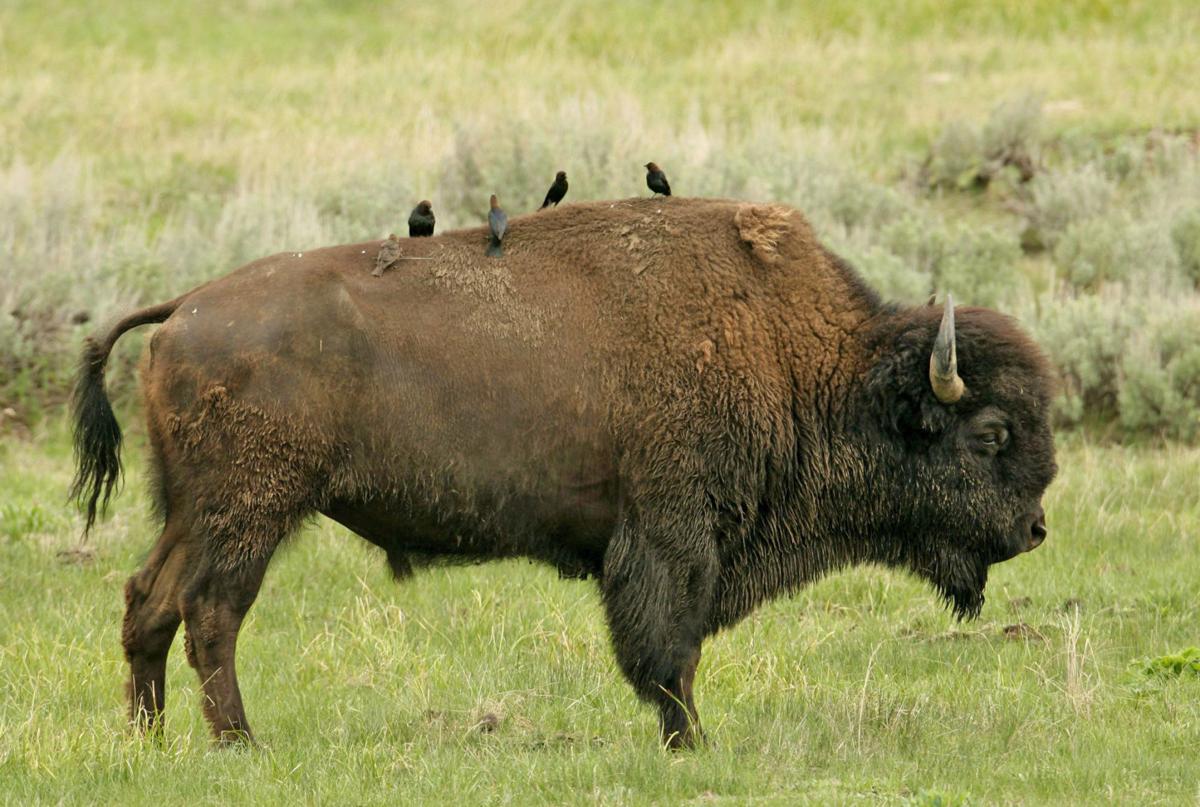 Cow birds sit on the back of bull bison near Soda Butte Creek in 2009. A full-grown bull can weigh weigh up to 2,000 pounds. Adult females weigh about half as much. The bison that faced off with a grizzly in Yellowstone was a yearling, so much smaller than an adult bison. 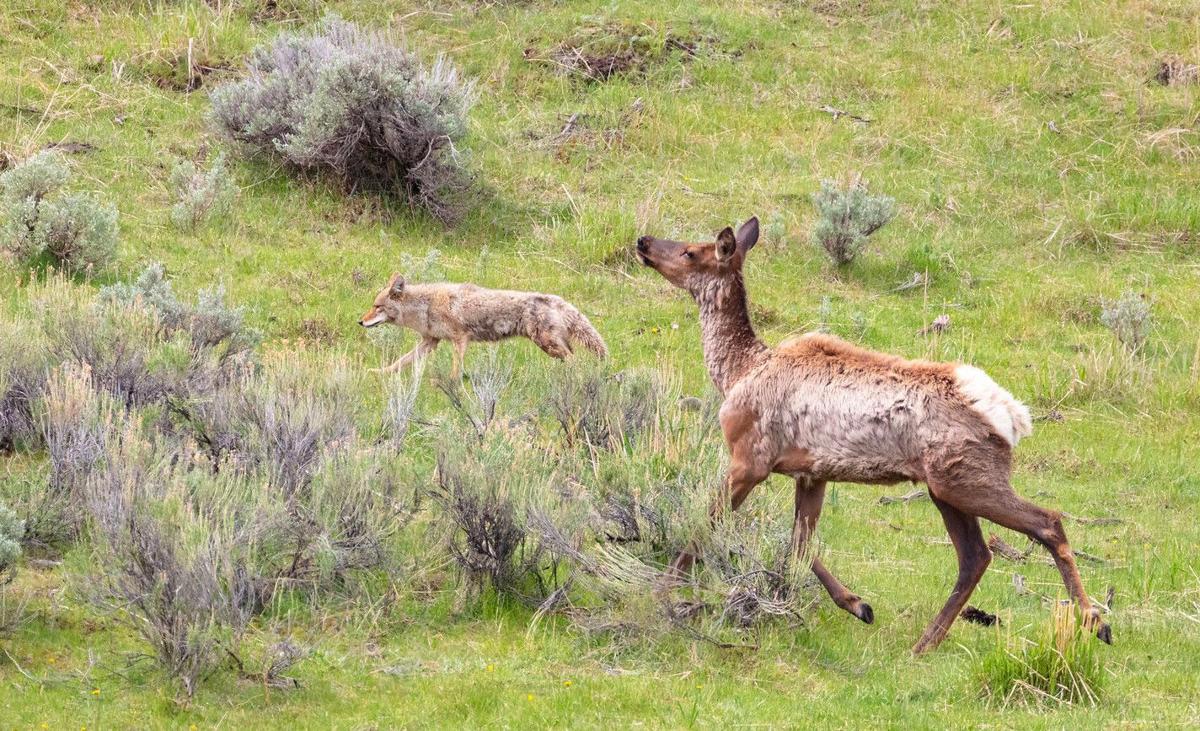 A cow elk chases a coyote away from her calf in May in Yellowstone National Park. Prey animals such as elk and bison can often chase off predators if they stand their ground. 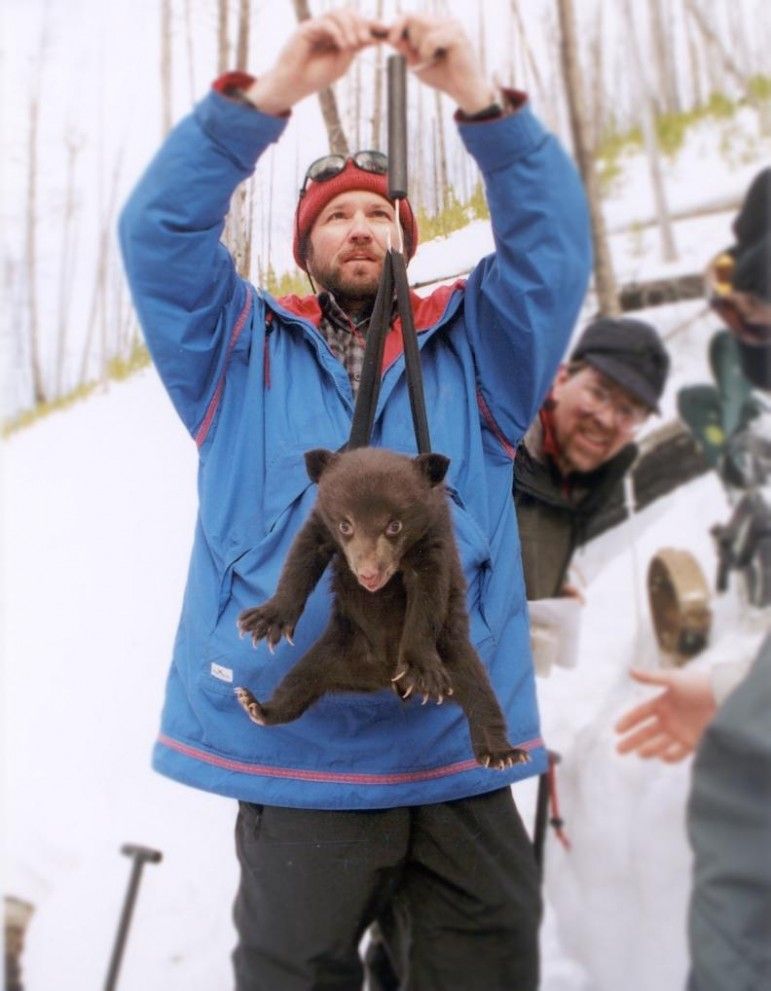 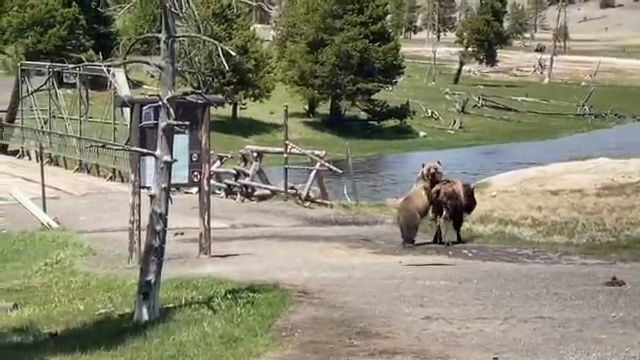 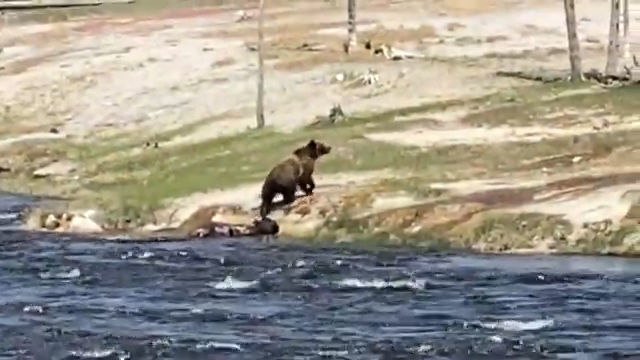 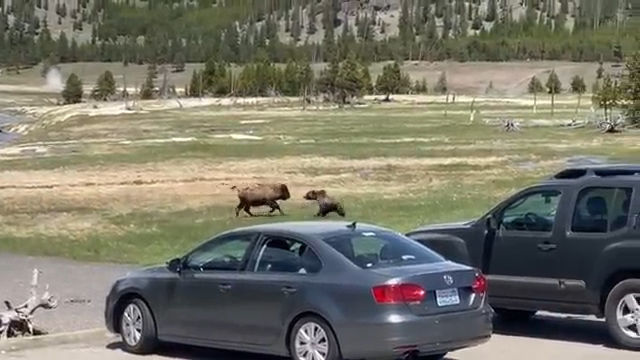 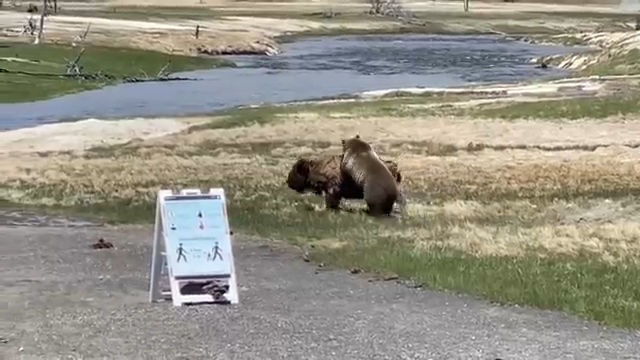