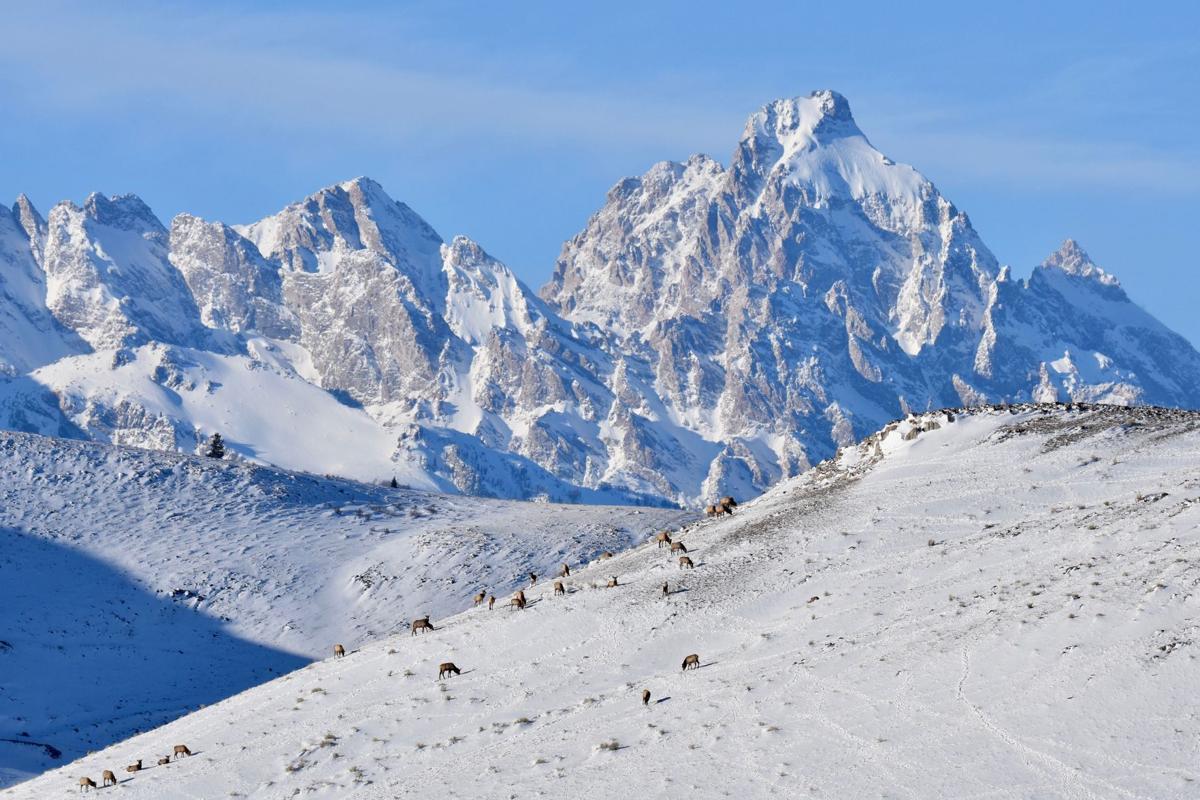 The Teton Mountains provide a stunning backdrop to elk feeding on the National Elk Refuge outside Jackson, Wyoming. The refuge annually plays host to about 8,000 elk, which are fed by the U.S. Fish and Wildlife Service. 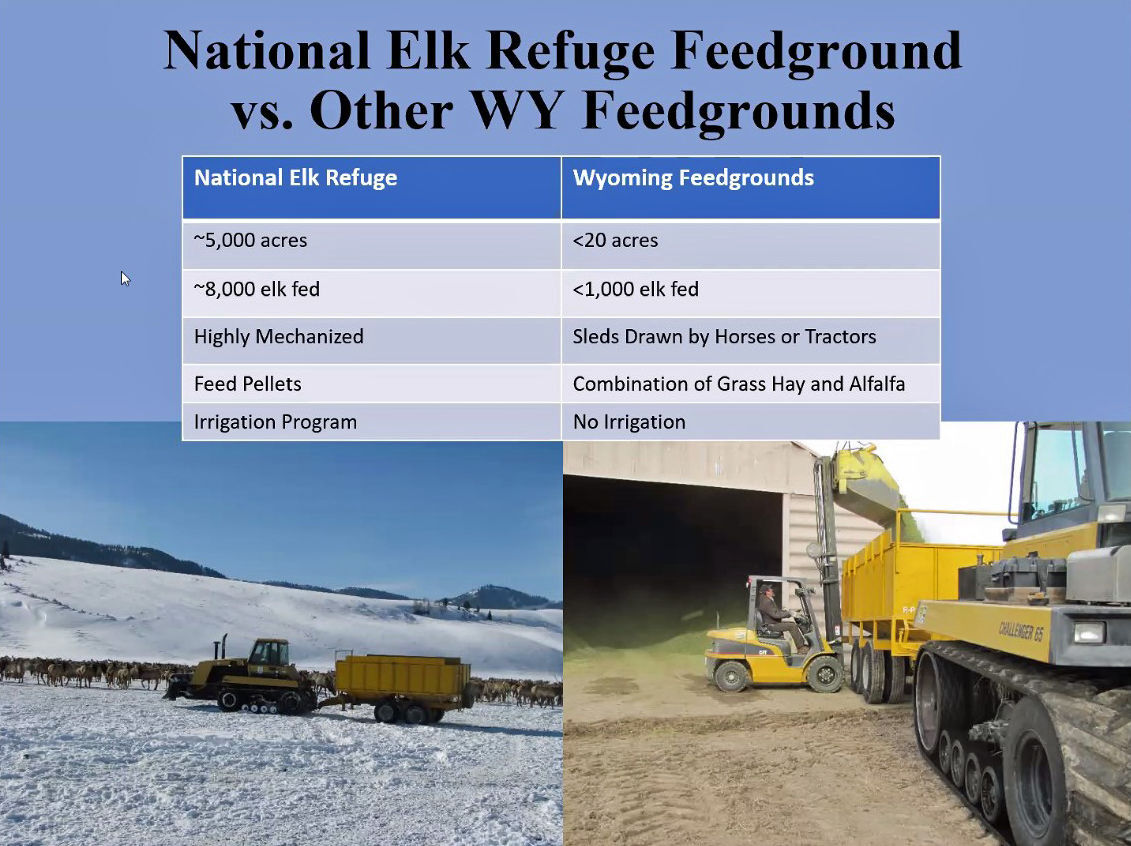 This comparison shows some of the differences between the National Elk Refuge's feeding program and the state of Wyomings.

Wyoming’s 22 elk winter feedgrounds are hotbeds and reservoirs for deadly wildlife diseases and therefore should be eliminated. But the feedgrounds have become so ingrained in the Cowboy State as a way to lessen problems with livestock producers that there’s no easy, political or practical path to step away from the 90-year-old practice.

Despite this challenge, last week the Wyoming Game and Fish Department launched what could be a two-year effort to examine and discuss elk feedground issues, the outcome of which would be the drafting of a new strategy. The public can get involved by logging on to https://wgfd.wyo.gov/Get-Involved/elk-feedgrounds.

“The ultimate goal is to present a proposal to move forward with a feedground management plan,” said Scott Edberg, deputy chief of Wildlife for WGFD, in a Wednesday Zoom presentation.

“There are no plans to shut down feedgrounds in the near future,” he added.

Why not just be done with the feedgrounds? After all, they are expensive and time intensive.

If the feedgrounds were shut down, about 15,000 elk would crowd onto existing winter ranges where pronghorn and mule deer herds congregate. The existing native winter range could not support the additional wildlife.

Or the spurned elk might move onto private lands, raising damage claims from agricultural producers while also increasing the risk of disease transmission to livestock.

Yet WGFD’s own staff acknowledges the feedgrounds are the human equivalent of a COVID-19 ward — numerous infected animals crowded together spreading disease.

The unnatural concentration makes it easier for a laundry list of illnesses to spread — including brucellosis, chronic wasting disease, hoof rot, scabies and bovine tuberculosis.

That’s one of the main reasons other state wildlife agencies have not replicated the idea of winter wildlife feedgrounds, and have even chastised Wyoming’s use saying the unnatural concentration has enabled diseases to spread across the Greater Yellowstone Ecosystem into adjoining Montana and Idaho.

If Wyoming doesn’t have the political will to abandon feedgrounds, what other options exist? That’s something WGFD has doggedly examined for years. Here’s what WGFD has found, starting with brucellosis, a disease that can be transferred from elk to cattle and is seen as a costly threat to the livestock industry.

In 2006 WGFD began capturing elk from the Muddy Creek feedground, testing them for brucellosis and then slaughtering any elk that tested positive. Meat from the slaughtered elk was processed and went to food banks. By 2011 the number of elk testing positive for exposure to brucellosis in the test and slaughter herds, which expanded to two other feedgrounds, had been reduced from 37% to 6%. Five years after halting the $1.3 million program, which was labor and therefore personnel intensive, exposure in the herd was back up to 32%.

“We probably could never capture all the elk to get prevalence down to zero percent,” said Brandon Scurlock, Pinedale Region Wildlife Management coordinator for WGFD.

In another effort, for 30 years the agency captured and vaccinated 2,500 elk calves with a brucellosis vaccine developed for cattle. The vaccine showed no signs of working because elk have a different immune system.

So for now the agency practices something familiar in this COVID-19 era — social distancing. WGFD utilizes the feedgrounds and hazing to keep elk away from cattle. A federal organization also provides $26,000 to $30,000 annually for building materials to construct 200-foot fences around landowners’ haystacks, thereby removing a wildlife attractant.

To enhance existing native winter range, WGFD has undertaken prescribed fire and mechanical treatments. The idea is to make elk less reliant on feedgrounds,. That only works when there’s not 3 feet of snow on the ground.

WGFD is also trying to reduce the number of days it feeds in spring so pregnant cow elk disperse before giving birth. Birthing fluids and tissue from an infected animal are believed to be the most common way the disease is spread.

Some of the feedground cow elk were collared with GPS devices, allowing WGFD to develop “risk maps” it could share with landowners and other agencies. This may make it easier to keep livestock and elk separated during the spring calving season.

In addition, WGFD has tried feeding elk in a checkerboard pattern rather than a straight line to spread elk out. That way if a pregnant elk does abort, other elk are less likely to contact the birthing material.

Despite all of these efforts, about one-quarter of all elk tested between 2007 and 2017 were exposed to brucellosis. Exposure rates, which fluctuate, peaked at 88% at one feedground. Across the state elk exposure to brucellosis ranges from 2% to 30% and includes herds that don’t visit feedgrounds.

Rather than eliminating brucellosis in wildlife, it would be easier to find a more effective vaccine for livestock, but even that is difficult. Brucellosis in wildlife is confined to elk and bison in the Greater Yellowstone Ecosystem, although it’s slowly spreading to an ever-larger area. Because the disease affects a relatively small region, there’s no financial incentive for a pharmaceutical company to invest money into developing a better vaccine.

“We tried grants and public funds, but that didn’t work,” Scurlock said.

“If we did have a 100 percent effective vaccine (brucellosis) wouldn’t be an issue,” he added.

Even if the threat of brucellosis could be addressed, chronic wasting disease is waiting in the wings. Although CWD does not pose the same threat to livestock, it has the potential over time to substantially reduce deer populations. Elk seem more resistant to CWD, but the disease can have a long incubation period of several years.

Because of its ability to survive in the soil for years, once CWD is established in feedgrounds it may be impossible to eradicate and the infected soils would serve as “hot spots for transmission,” said Edwards, of the Wildlife Health Lab.

“It’s so complex it’s really hard to predict what will happen,” he said.

Although the Wyoming Game and Fish Department is the largest provider of sustenance for wintering elk in Wyoming, it’s not alone. The National Elk Refuge just outside of Jackson is operated by the U.S. Fish and Wildlife Service. Last winter the refuge fed about 8,000 elk and 280 bison.

Since beginning winter feeding in 1912 the refuge has seen a decline in its woody habitat due to the concentration of wildlife. In an attempt to address the issue, and after more than a decade of delay while it negotiated with the state of Wyoming, the refuge released a five-year “step down” plan, meant to phase out the feeding program. Last year a conservation coalition sued the agency arguing the plan won’t phase out feeding and is simply a delaying tactic.

The refuge is just south of Grand Teton National Park, where many of the elk spend the summer. Through its enabling legislation, passed in 1950, the park is directed to work with Wyoming Game and Fish to ensure conservation of elk, which now includes hunting inside the park.

“We’re allowed to have a controlled reduction of elk as long as that is deemed necessary for the healthy management of the Jackson elk herd,” explained Gus Smith, chief of Science and Resource Management for Grand Teton.

The park’s 2017 Bison and Elk Management Plan, also recommends “working closely with Wyoming Game and Fish to create a framework that gradually decreases the need for supplemental feeding on the refuge,” Smith explained.

The Bridger-Teton National Forest is also involved in the feedground issue. It authorizes permits to WGFD to operate at eight sites on the forest. In April, a lawsuit was filed challenging the Forest Service’s reauthorization of those special permits.

The subject of feedgrounds in Wyoming is also a multi-agency challenge, which adds to the difficulty and politics of negotiating any solution.

1912 — The federal government provided money to help subsidize the cost of feeding elk.

1917 — Brucellosis is detected in bison.

After the state Legislature passed a law allowing landowners to file claims for reimbursement from wildlife damages, WGFD decides it is cheaper to feed elk than to pay so many damage claims.

Since 1960 the current system has been in place, feeding 14,000 to 16,000 elk annually at 22 state-run feedgrounds. It takes about four months to haul hay to remote feedgrounds.

Hay is distributed across the feedgrounds using horses and sleighs. Two feedground managers oversee the work, which includes hired seasonal workers, some of which have held the job for more than 40 years.

Eighty percent of the state’s elk in areas with feedgrounds spend the winter on them.

The cost to feed elk last year was $1.6 million, which was partially offset by $163,000 raised from hunters who purchased Elk Special Management Permits at a cost of $15 each.

The elk mortality rate on feedgrounds is typically less than 1%.

Wyoming hunters could see extended seasons, late hunts or more tags for mature bucks as a means to help control or slow the spread of chronic …

Most came from out of state, and their presence and inkling to continue an annual Jackson Hole tradition was an act of defiance and disregard for requests to stay home while the novel coronavirus was keeping the community largely closed.

Late-season hunts, aimed at reducing the population by targeting cows and calves, were especially uneventful for hunters.

Rylan Lynam was feeling the pressure, and was itching to get his elk.

A $209,755 payment to Plan One Architects was approved by the Wyoming Game and Fish Commission on Tuesday for completed architectural work for…

The Teton Mountains provide a stunning backdrop to elk feeding on the National Elk Refuge outside Jackson, Wyoming. The refuge annually plays host to about 8,000 elk, which are fed by the U.S. Fish and Wildlife Service. 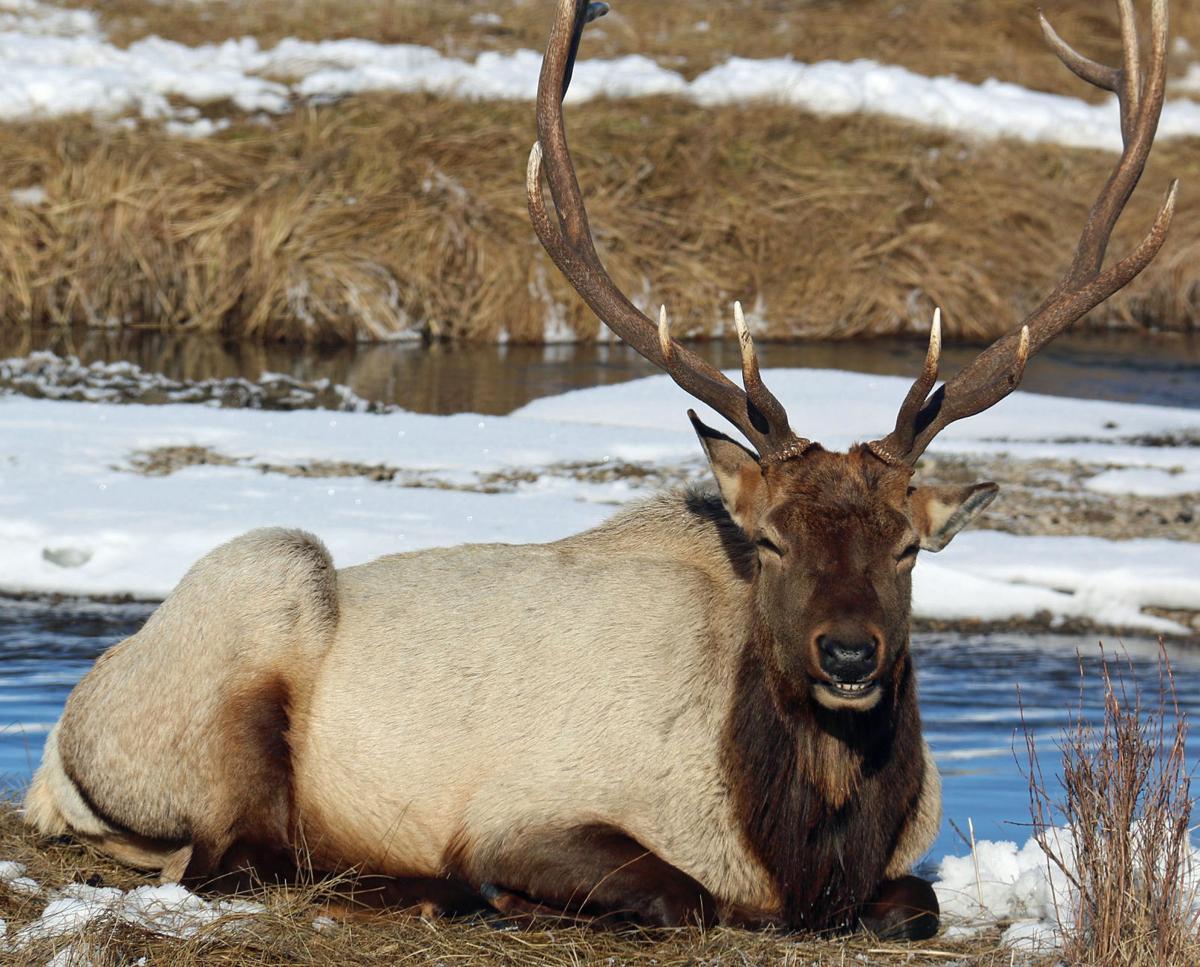 Winter ranges were established in Wyoming in the early 1900s following a severe winter that decimated the animals' population. Now the mortality rate in winter is less than 1%. 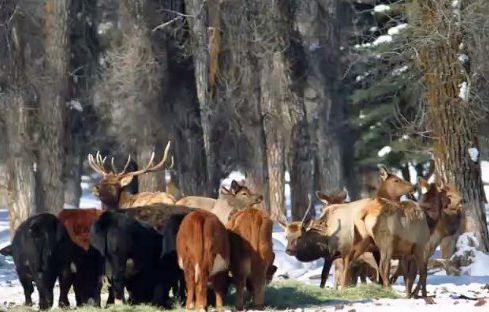 Wyoming has a zero-tolerance policy for wildlife that mingles with livestock because of the threat of disease transmission. 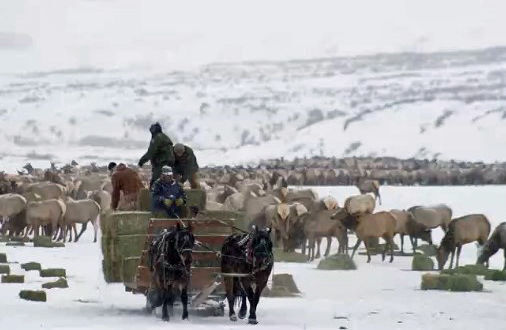 Wyoming Game and Fish Department staff use horses and sleighs to feed elk on 22 winter feedgrounds spread across the western third of the state. 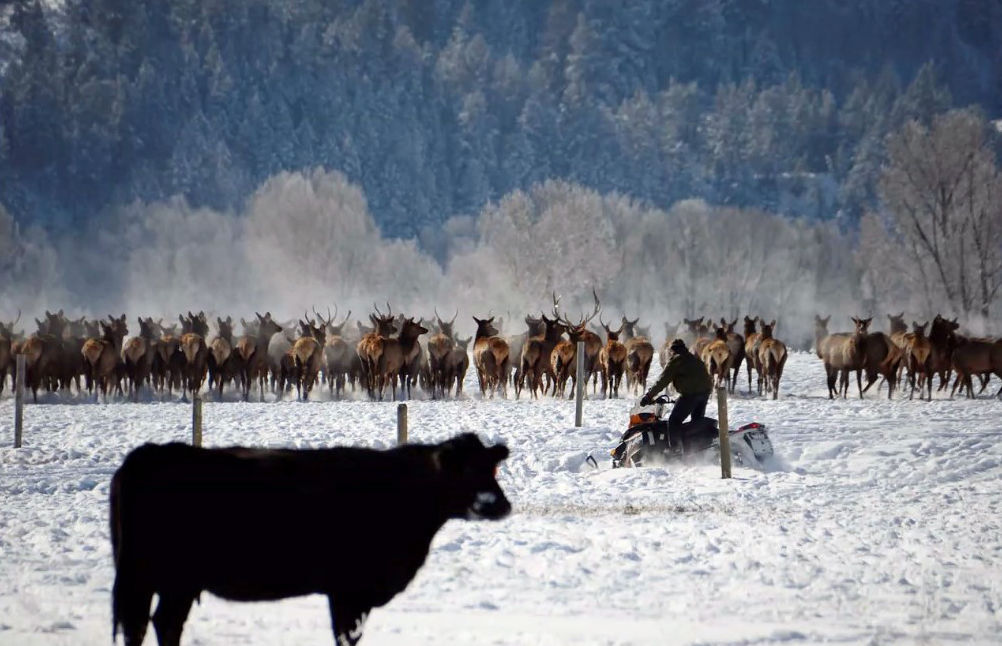 One way WGFD keeps livestock and wildlife separated is by hazing.

WGFD spends the summer hauling hay to remote locations like the Pinedale feedground to provide winter food for 14,000 to 16,000 elk annually.

This comparison shows some of the differences between the National Elk Refuge's feeding program and the state of Wyomings.

Removing feedgrounds in Wyoming would force elk like these that winter on the National Elk Refuge to find other sources of food, increasingly the likelihood of conflicts with livestock owners.