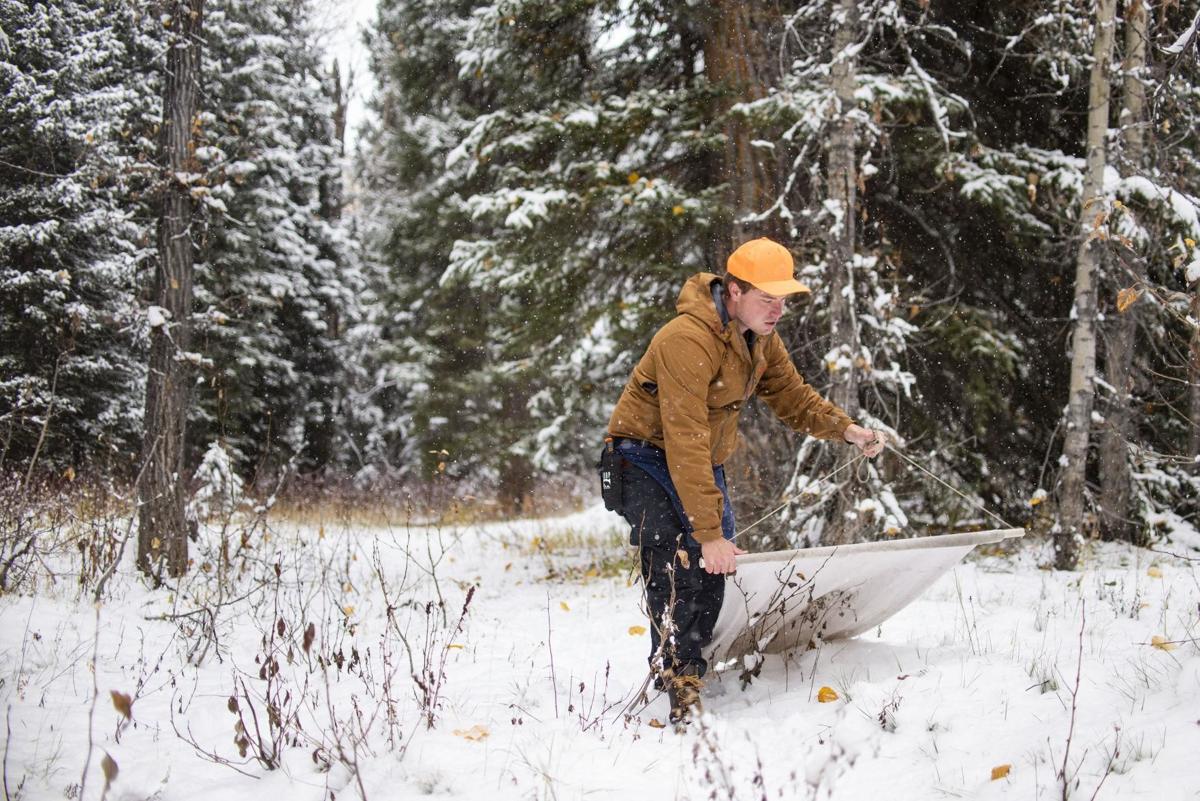 Troy Koser, a doctoral student at Montana State University, drags a cloth purchased from a fabric store across the snow-covered grass to see if any winter ticks will cling to it. The parasitic insect is a concern for Jackson Hole moose, which face depleted habitat, predation changes and warmer weather. 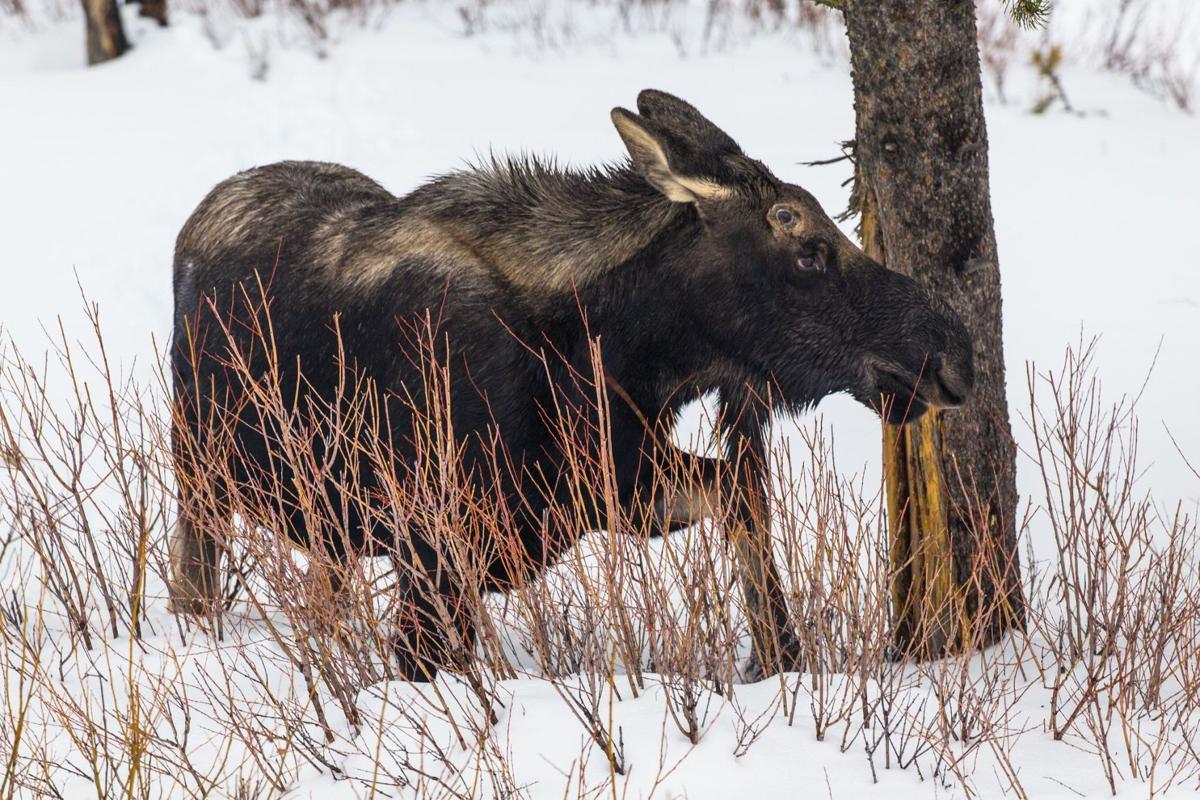 Moose like this bull, which has lost its antlers, have seen their numbers decline, possibly due to the scourge of ticks that can infest them.

PACIFIC CREEK — Troy Koser was inspecting the remnants of a “tick ball” that clung to a blade of grass.

That’s just what it sounds like. The Montana State University Ph.D. ecology student was documenting a cluster of diminutive blood suckers, in this case the larval form of winter ticks, a species that specializes in parasitizing ungulates, especially moose.

On a walk through the woods, this tick ball, which consisted of four ticks no larger than the point of a tack, would be 100% imperceptible to the average passerby. But Koser and a field technician, Logan Hartlaub, who accompanied him, knew where to look. Marking tape was tied around a twig nearby from when they’d encountered the same tick ball in the past. They were expecting ticks would be here again, and they were also simultaneously fascinated by the subject of their years-long scientific inquiry.

“The weirdest thing is that something this small can kill a moose,” Koser said.

One winter tick latched onto its host would do little damage, save for ingesting a wee bit of blood. But for moose the problem is there are often legions of them.

“The highest number I’ve ever seen, from a paper, is more than 100,000 ticks on one moose,” Koser said. “On the moose that I’ve found here, there’s only a couple thousand that I’ve found. We don’t get any of those huge numbers that they see out East.”

Nevertheless, winter ticks are still of concern to the hundreds of Shiras moose that dwell in Jackson Hole’s corner of the Greater Yellowstone Ecosystem. Moose here have not fared particularly well, and the Jackson Herd’s numbers are 70% below the Wyoming Game and Fish Department’s objective and down even more from historic highs in the 1980s.

There are likely a confluence of factors contributing to the lower population, like depleted habitat, predation changes and warmer temperatures that moose don’t thrive in. Until now, nobody has studied how winter ticks factor into the equation.

“I’m not finding quite as many as people out east have found,” Koser said. “But maybe our moose are so small and they already have other stressors, that even a small or moderate number of ticks could be an issue for them.”

Unlike elk and deer, moose do a poor job of eliminating the pint-size parasite while grooming themselves. The ticks grow considerably as they advance through their life stages, and eventually there are thousands of 1/4- to 3/4-inch-long arthropods sucking their blood. In 2017, Grand Teton National Park research found that moose in the Jackson Herd were losing significant amounts of late winter hair due to the ticks. Pity mangy moose? Blame it on winter ticks.

Koser’s work also sets out to determine how winter ticks will be impacted by climate change, which is reducing how far Jackson Hole thermometers plunge and depleting local snow cover in the fall and spring. To answer that question he’s recording “microclimate” data for where he’s finding and not finding ticks, which means he’s logging the temperature, wind speed, humidity and weather.

Now in the second year of field surveys, Koser hasn’t drawn any definitive conclusions. One theory he’s investigating is that winter ticks will fare better with less snow. In particular, when the snowpack melts off earlier, tick eggs and larvae will survive better.

But some of Koser’s scientific peers are looking into alternative hypotheses. One is that drought — made more likely due to climate change — will hit tick populations hard by desiccating eggs and larvae and causing them to die. Perhaps that will counteract positive effects from the loss of snow cover, he said.

The process of looking for winter ticks out in the environment is slow, steady and methodical. Last fall Koser and his collaborators walked more than 22 miles a month and found over 7,000 winter ticks. They were most numerous in grassland, but the researchers also found good numbers dwelling in non-willow shrubs and willows.

Five days a week this fall, Koser and Hartlaub are out in places like Buffalo Valley, Pacific Creek, the Gros Ventre River corridor and even near residential areas along the west bank of the Snake River. They walk 16 different 250-meter-long “transects” a day while dragging pieces of cheap synthetic cloth that Koser picked up at Joann Fabric. Their routes are subjective, following game trails that moose would be most likely to walk along. Every few steps they stop to inspect the cloth to see if they picked up one of the tiny larval ticks, which are often perched up “questing” on vegetation and waiting to find a host. Although the ticks are truly tiny in the fall, a touch of red gives them away contrasted against the off-white cloth.

There is not much more winter ticks are capable of. They’re not exactly breaking intelligence records.

“Most insects have the ability to take in stuff in their environment and do something about it,” Koser said. “But winter ticks are kind of remarkable. When stuff like this is happening — it’s raining, it’s snowing, it’s windy — they don’t do much. They don’t respond to environmental stimuli.”

After engorged female ticks shed off their ungulate hosts in the spring, they lay eggs. The larvae are basically dormant for the entire summer, but once deer, elk and moose start rutting the parasites are “activated” and find vegetation to cling onto. When they find a host, they latch, grow into nymphs and then adults and the process restarts.

Koser kind of happened into tick research. He completed his master’s degree in tick collection methods at the University of Georgia. His Ph.D. in Bozeman is funded through the National Climate Adaptation Science Center, which is enabling him to execute the first-ever ecological survey of ticks in the Yellowstone region. Game and Fish and the U.S. Geological Survey’s Northern Rocky Mountain Science Center are also collaborating.

There’s a chance, someday, that Koser’s findings will be able to help out the moose who host the winter ticks he’s studying. His data will give wildlife managers insight into where ticks are most numerous — and likely to become more numerous in the future. Perhaps, he said, that will help managers make decisions about which moose habitats should be prioritized.

Back at the sight of the broken-up tick ball near Pacific Creek, Hartlaub explains how they collect the ticks that make their way onto the drag cloth.

They use NeverHair.com lint rollers.

He grabs an example of one of the old bagged sticky papers from his pack, and there on the glue were nine different winter ticks.

JACKSON, Wyo. — A Finnish mission trip early on in life didn’t do much to tamp down Jeremy Barnum’s hunger to branch out and experience the va…

When it comes to wolves, moose in western Wyoming will often stand their ground in the late winter, according to new research.

A large-scale collaborative effort that will prevent future losses of migratory cutthroat trout and other native fish by installing a fish screen on Wyoming's Spread Creek irrigation system has begun.

Troy Koser, a doctoral student at Montana State University, drags a cloth purchased from a fabric store across the snow-covered grass to see if any winter ticks will cling to it. The parasitic insect is a concern for Jackson Hole moose, which face depleted habitat, predation changes and warmer weather.

Moose like this bull, which has lost its antlers, have seen their numbers decline, possibly due to the scourge of ticks that can infest them.