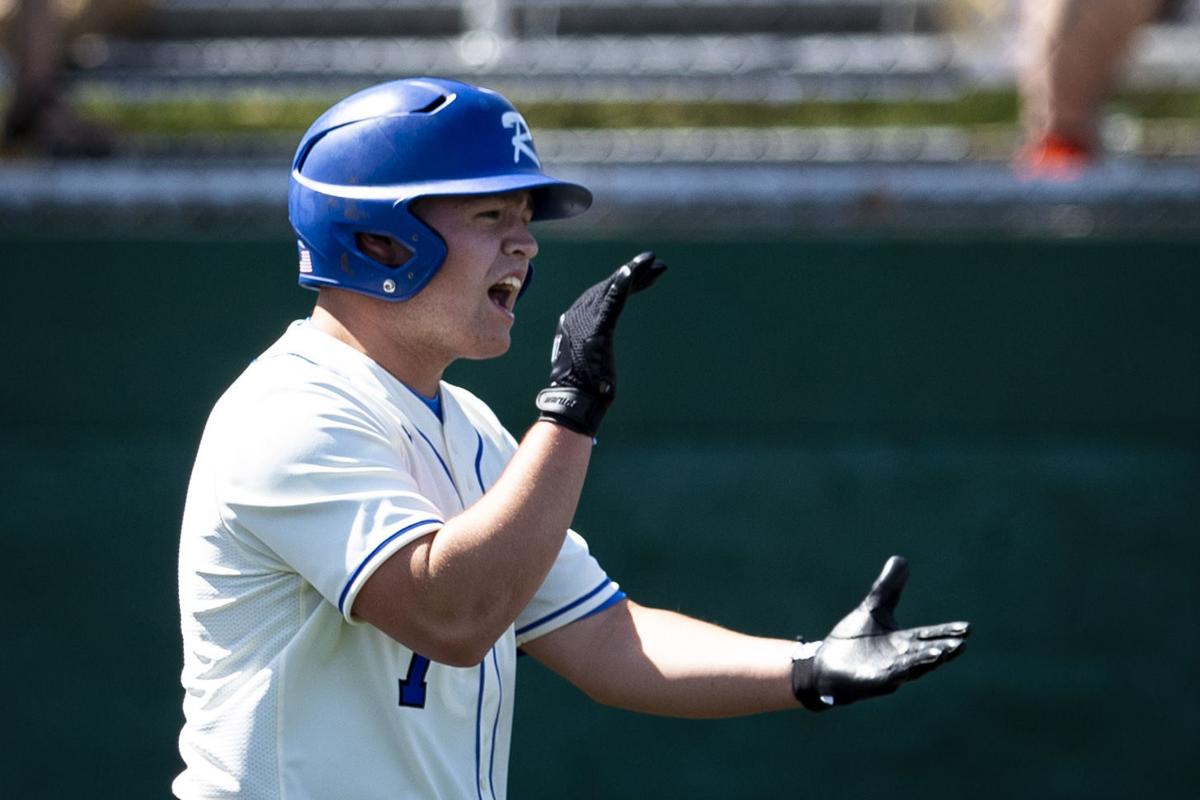 The Royals' Colten Chavez claps after scoring a run against the Scarlets on Saturday at Pirtz Field. 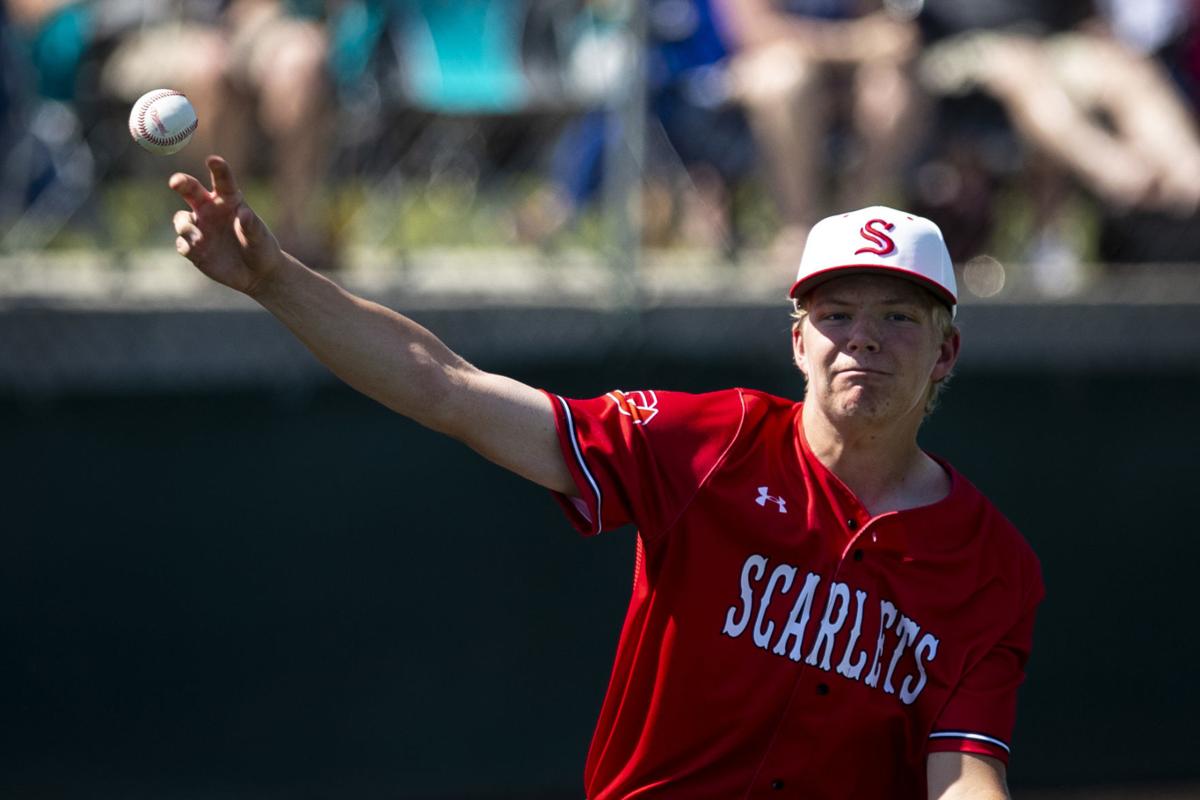 The Scarlets' Bradley Wagner pitches against the Royals on Saturday at Pirtz Field. 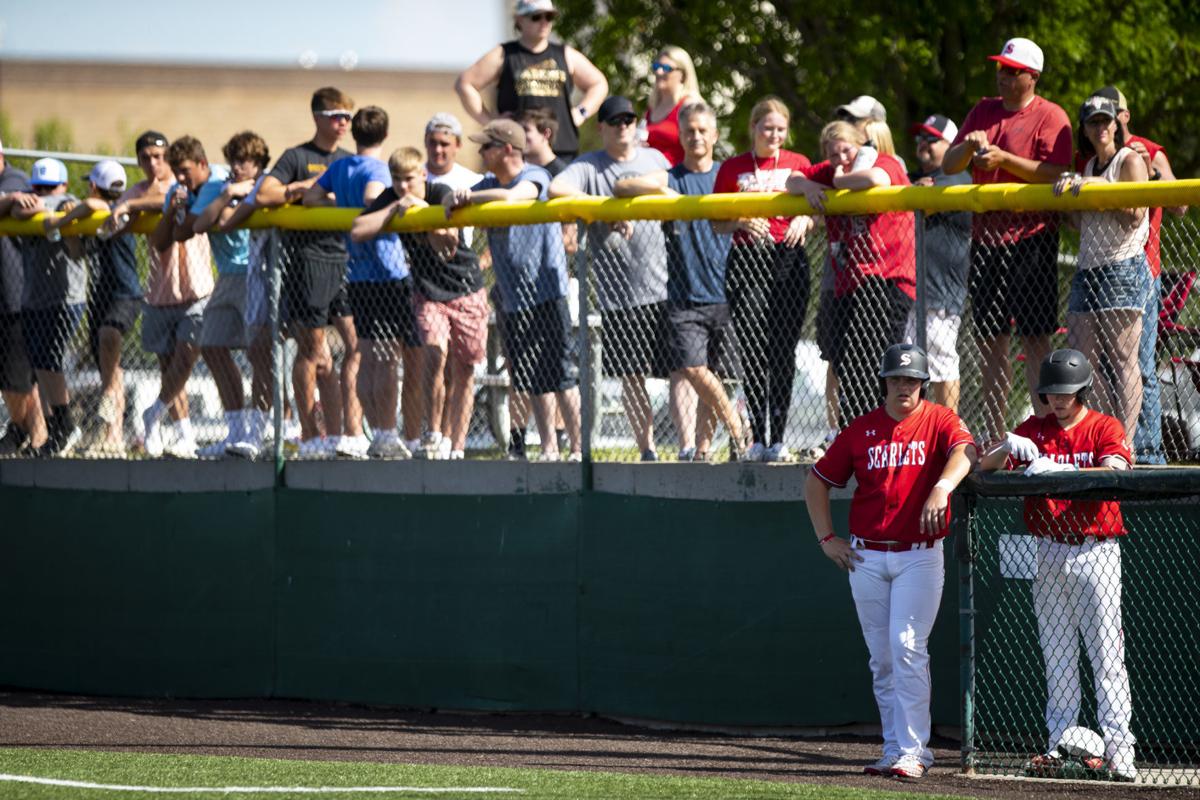 BILLINGS — Anticipation turned into reality for Billings’ American Legion baseball players on a warm and sunny Saturday — a perfect afternoon to start the season and usher in a break from talk of global pandemics and civil unrest.

Hundreds flocked to Pirtz Field to watch the Royals and Scarlets, longtime crosstown rivals, play their head-to-head opener. Royals left-hander Nick Eliason struck out the side in the top of the first, and Brenden Concepcion singled through the left side to drive in the season’s first run in the bottom of the inning.

The Royals, on the strength of a six-run fifth, prevailed 11-1 in a game that ended after six innings due to the 10-run rule. Eli McCoy had a big day for the victors, driving in four runs on his mother's birthday.

The game was part of a two-day, six game schedule that also includes the visiting Missoula Mavericks.

“When you come out against a rival team and you put 11 runs on them, that’s a pretty good day,” said McCoy, the Royals’ first baseman. “We battled hard. Nick gave us a shot.”

It was just a few weeks ago that members of the Royals and Scarlets weren’t sure if there would be baseball this year. But after the national American Legion headquarters announced it wouldn’t sponsor any 2020 regional and national championships due to coronavirus, Montana’s American Legion organizers raced to cobble together a regular-season schedule for teams statewide.

Helena hosted Missoula last week in the first game of the year, a 10-5 Senators win. But this was Billings’ turn.

Portions of the stands at Pirtz Field were cordoned off to encourage social distancing, but fans lined up along the fences down both baselines to catch a glimpse of the first local Legion game of the year.

“People are itching for this, and for a little bit of normalcy,” Scarlets coach Adam Hust said. “The normalcy right now is baseball and watching these kids come out and play and have fun. It’s a great atmosphere and hopefully people want to keep coming out and support them.”

Eliason was limited to roughly 60 pitches and he was sharp throughout, allowing one run through four innings while striking out five. The Royals broke open a close game in their half of the fifth by scoring six runs — RBIs by McCoy, Colten Chavez and Brady Uhren highlighted the outburst.

The Scarlets also made three costly errors in that inning atop the new turf infield installed at Pirtz Field.

“Plays we make a million times in practice, we just didn’t make. That’s early season. It’s stress,” Hust said. “The guys are wound a little tight. There’s a bunch of people here watching. We’ve just got to figure out to play loose and confident. If we’re confident we’re going to make plays.”

With the bases loaded in the bottom of the sixth, McCoy drove a two-run double down the right field line to give the Royals a walk-off victory.

It was McCoy’s third hit, and he proved especially potent in two-strike counts.

“You just have to stay in it, battle your way back and find a mistake,” McCoy said.

The Scarlets scored their only run in the third on a two-out RBI single by Logan Meyer. Otherwise, Eliason and reliever C.J. Bohn held the Scarlets in check.

Meyer had the Scarlets’ only hit.

“Nick came out and gave us a great outing,” said David Swecker, the Royals’ first-year coach. “And then (Bohn) came in and pounded the zone. We played great defense. I always tell our guys that defense is going to win us games, and we were able to do that.”

The Scarlets beat Missoula 3-2 later Saturday. Missoula rebounded to beat the Royals 8-2 in the nightcap.

The teams will play another three games at Pirtz Field on Sunday, with the Scarlets and Royals squaring off again at 3 p.m.

“We got to come out and play baseball. It was a blast,” Hust said. “Obviously the outcome isn’t what we wanted, but our word this year is ‘perspective.’ There are thousands and thousands of kids that don’t get to play, and we do. We’re going to have good perspective on it and learn as we go.”

Nathan McDonald's single in the bottom of the seventh scored pinch runner Jace Buchanan from third base and lifted the Scarlets to a 3-2 win over Missoula later Saturday. The winning hit came with one out against Mavericks pitcher Zach Hangas.

The Mavericks took an early 1-0 lead when Connor Jordan was hit by a pitch with the bases loaded in the first inning. Missoula tacked on another run in the fourth on an RBI base hit from Dayton Bay.

The Scarlets scored a run in both the third and fourth innings: First on a sacrifice fly off the bat of Nate Dewar and then on a run-scoring single by Jackson Schaubel. Schaubel had two hits to lead the Scarlets.

The Mavericks unloaded six runs in the top of the sixth, all with two outs, which spearheaded an 8-2 victory over the Royals in the final game of the day.

Billings made three errors in the sixth, which helped open the door for Missoula. The Mavericks' Aidan Markovich singled, drove in a run and scored in the inning. Markovich finished the game 3-for-5 at the plate.

Brendan Miller had two hits and an RBI for the Royals. Eliason drove in Billings' other run.

The Scarlets' game against the Royals in American Legion baseball at Joe Pirtz Field in Billings on Saturday, May 30, 2020.

The Royals' Colten Chavez claps after scoring a run against the Scarlets on Saturday at Pirtz Field. 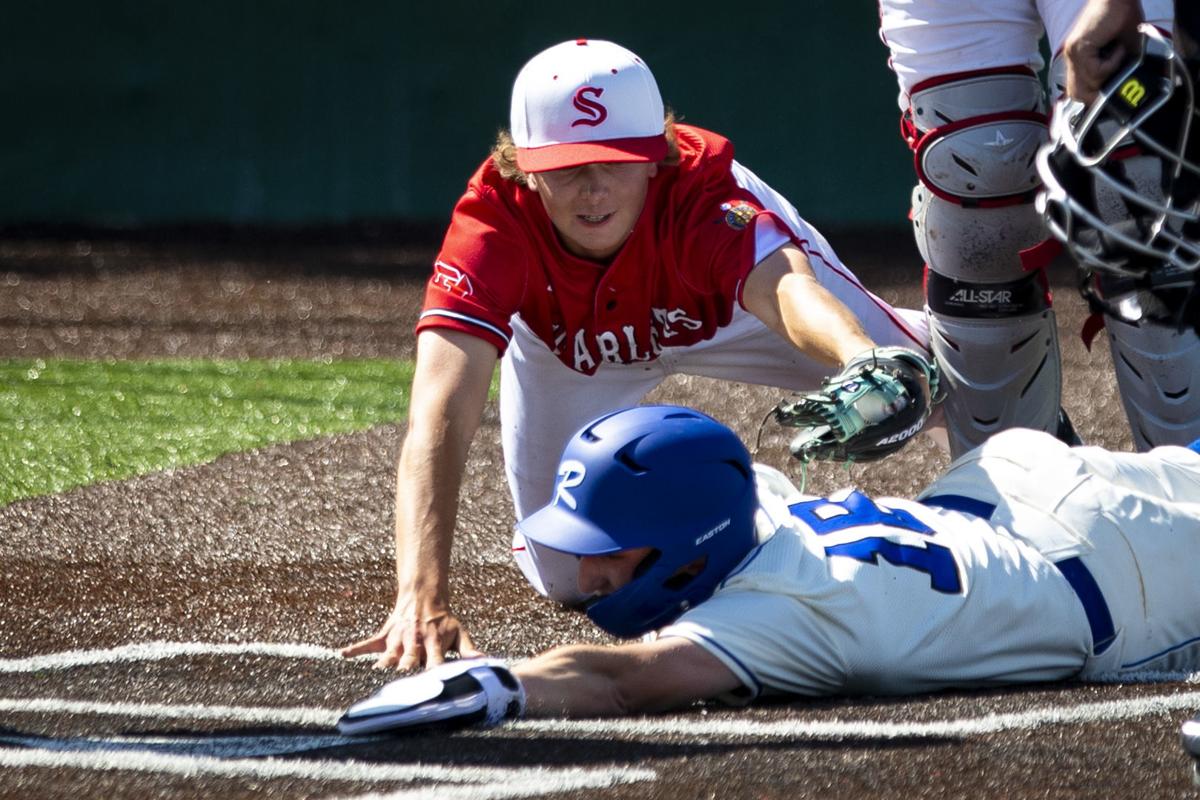 The Royals' Jaeden Jordahl slides into home under the tag of the Scarlets' Spencer Berger on Saturday at Pirtz Field.

The Scarlets' Bradley Wagner pitches against the Royals on Saturday at Pirtz Field. 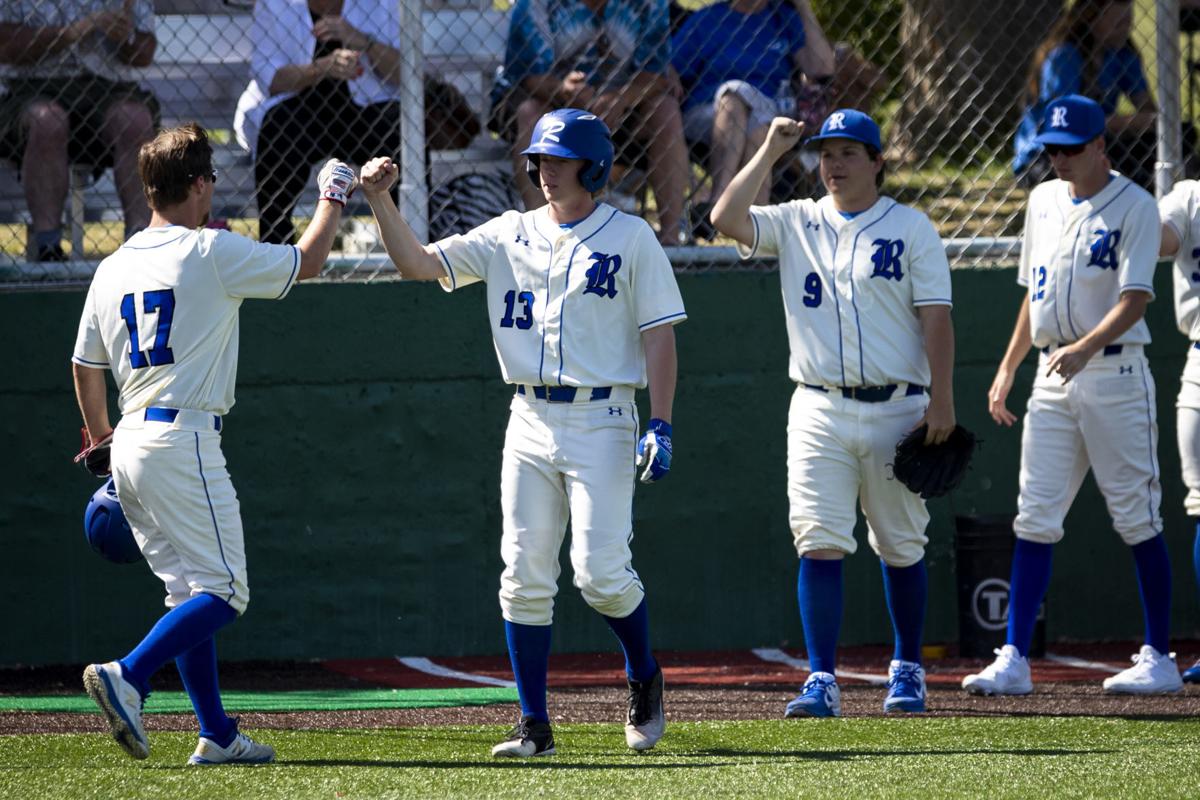 The Royals' Chase Hinckley (17) gets first-bumps from his teammates during a game against the Scarlets on Saturday at Pirtz Field.