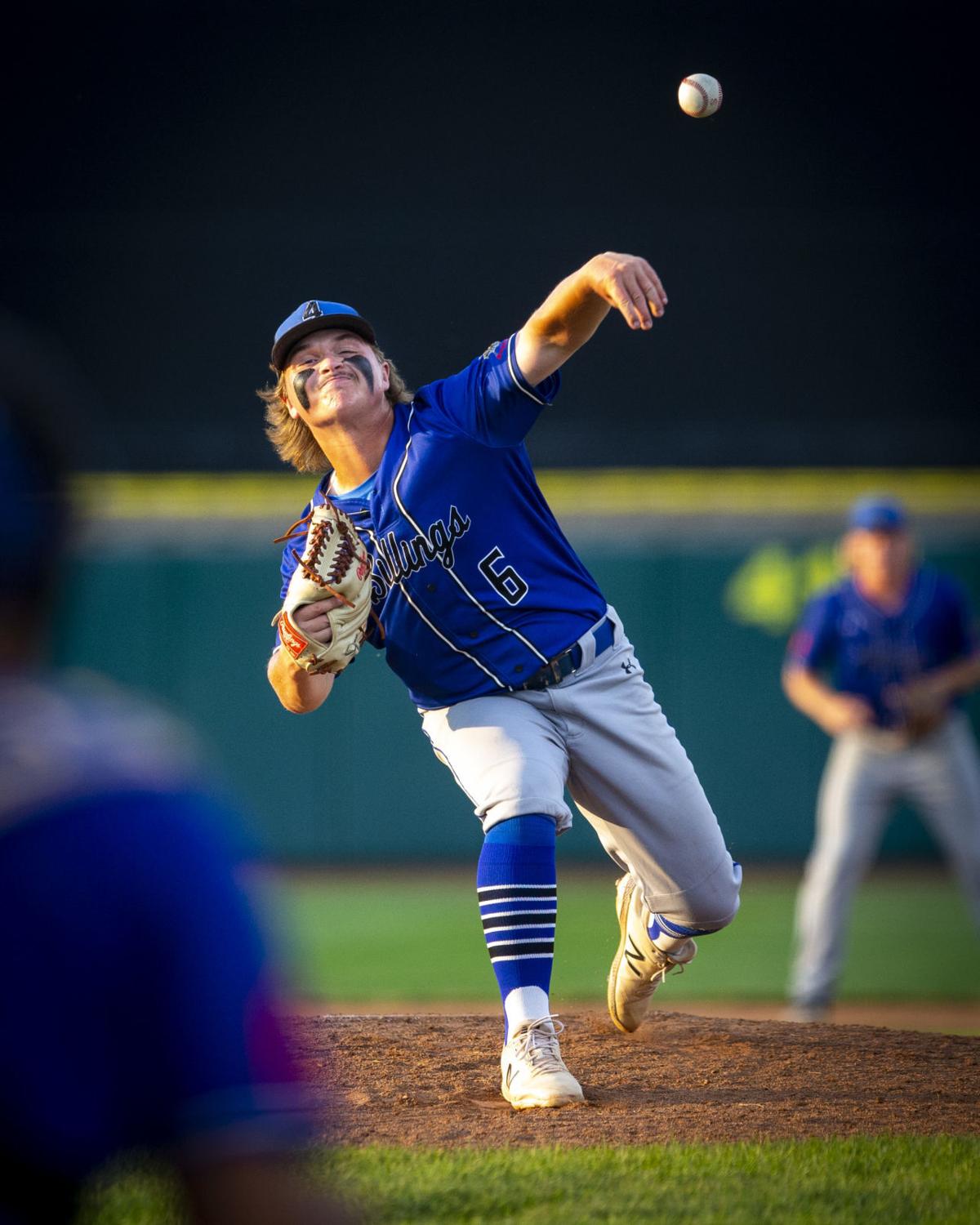 The Billings Royals' Eli McCoy pitched seven-inning complete game in a 6-3 victory over the Scarlets on Thursday at Dehler Park on Senior Night to conclude the regular season. 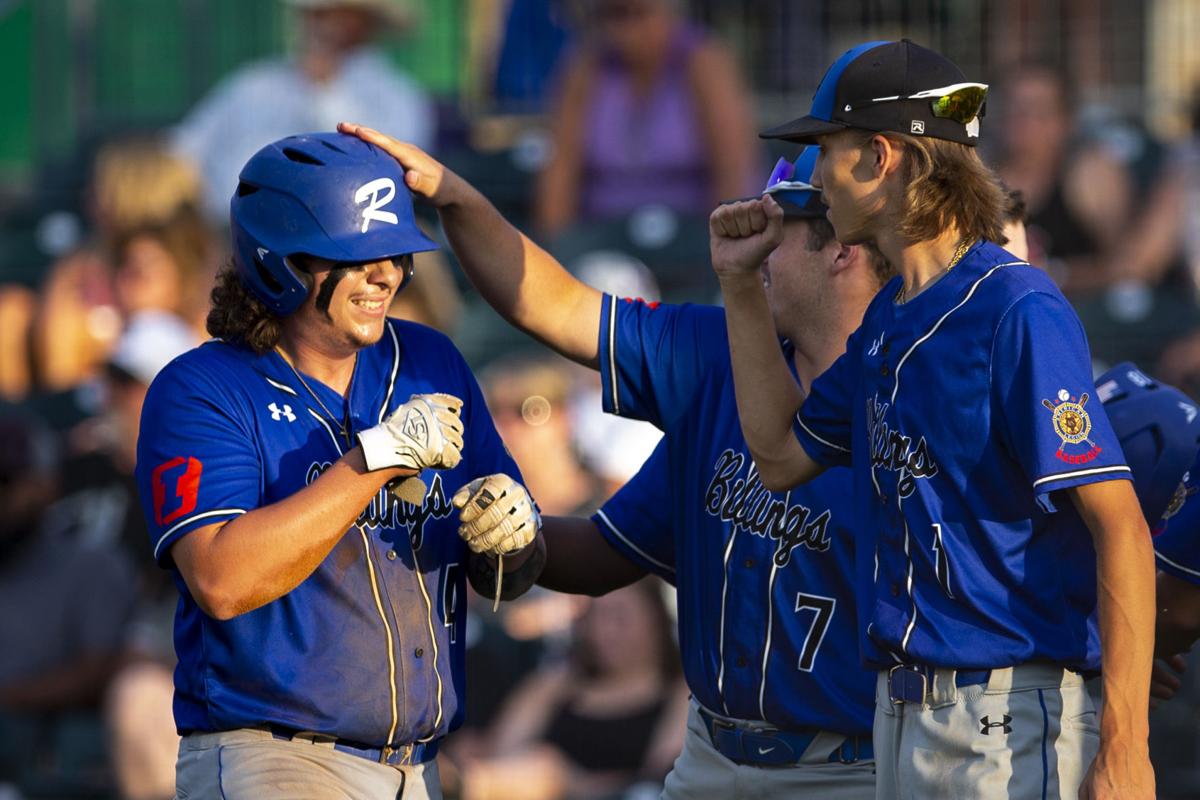 The Royals' Aiden Montez, left, is congratulated by his teammates after he scored on Thursday against the Scarlets at Dehler Park.

BILLINGS — After eight runs were scored in the first inning Thursday night at Dehler Park, it looked like the final score might resemble more of a football game than an American Legion baseball game.

But, in the end the game will be remembered as another classic Royals-Scarlets game, to which there is at least another in store this year.

Eli McCoy, who gave up three first-inning runs, settled down and went the seven-inning distance to lead the Royals past their crosstown rival Scarlets 6-3 in front of a nice-sized crowd at the downtown ballpark.

The nonconference game was the final contest of the regular season for both clubs. The State AA tourney is scheduled for Aug. 5-9 in Helena.

“I always kind of battle with first innings,” McCoy said. “The biggest thing was I had to calm down, buckle down and throw strikes and make sure I located.”

After a Senior Night ceremony, the game started approximately a half hour late. But that didn’t seem to bother either offense.

The Royals jumped out to a 5-0 lead on the strength of six hits and three Scarlets’ errors. Leadoff batter Jaeden Jordahl started the surge with a single to the hole through the left side of the infield and Chase Hinckley reached on an error when he was trying to sacrifice bunt. Nick Eliason followed with a bunt single to load the bases. Brenden Concepcion then hit a two-run single to left and it was 2-0 Royals.

Before Aiden Montez singled in Concepcion for a 3-0 Royals’ lead, Eliason was caught in a rundown for an out to limit the damage. Brady Uhren followed with a single and Brendan Miller reached on an error as Montez scored for a four-run advantage. Uhren would score as the relay throw sailed past the catcher and the Royals were up 5-0.

Instead of coming out flat after the Senior Night introductions and videos the Royals were ready.

“We tried to keep our energy the entire time through it,” said Concepcion. “We knew it would take a while.”

Of his big hit, Concepcion, a catcher, said: “When pitchers get in trouble they try to go soft, so I waited for something soft.”

The Scarlets answered in the bottom of the first with three runs of their own as leadoff batter Nate Dewar singled and Johnny Day walked. Logan Meyer, the No. 3 hitter, singled in Dewar and it was 5-1 Royals. A flyout by Jarron Wilcox pushed Meyer to third and Meyer stole second, prompting Day to score on the throw. Michael Feralio would add an RBI single to plate Meyer.

When Michael Horrell was hit by a pitch, the bases were loaded as Jackson Schaubel had reached on an error two batters earlier and Feralio was at second. The Royals gathered at the mound and McCoy retired the next two batters on fly outs.

“Honestly, the first inning, Eli is a batter or two from being pulled,” said Royals coach David Swecker. “He found his rhythm and sailed through the rest of the game. He had guys off-balance and competed really well and threw his pitches.”

McCoy, one of those honored during the pregame ceremonies, said it will be a night he remembers for a long time.

“Especially on Senior Night. With a great crowd and a great field and everyone supporting you, it doesn’t get much better than that,” he said.

“They are a great team and it feels great to be able to win,” Concepcion said. “With this series, it’s whoever makes less mistakes and whoever takes the most bases.”

Scarlets coach Adam Hust said his team will learn from the setback and be ready for the state tournament.

“Just focus on the little stuff and get it done when the opportunities are there,” he said. “Hopefully at that point, at state we can get it done and win some ballgames.”

After seven crosstown games, fans should prepare for the Royals and Scarlets to play each other in the opening round at state. Both coaches said the teams are scheduled to meet in the first round at the state tournament.

What will be key?

“Have a short memory,” said Hust. “Come out and do the little things right and play hard. The season has come to an end and it’s a whole new season Wednesday. Hopefully we come out and play well.”

“Hopefully we can keep it rolling against them,” Swecker said.

BASEPATHS: Before the game, there was a moment of silence for Renee Kramer, who passed away a week ago. Kramer was a longtime Legion baseball supporter and volunteer. Kramer’s son, Doug Kramer, and two grandsons, Cole Kramer and Elijah Sommerville, played in the program and her daughter Brenda Sommerville is the Billings American Legion Baseball director of operations. … The Les Smith Memorial Sportsmanship Awards went to Jaeden Jordahl of the Royals and Johnny Day of the Scarlets. … The BALB Scholarship winners were Nate Dewar of the Scarlets and Nick Eliason of the Royals.

The Scarlets will need to win twice on Sunday to capture the state title.

Tournament is at Dehler Park Wednesday through Sunday.

A roundup of third day of the State A Legion tournament in Lewistown.

The Billings Royals' Eli McCoy pitched seven-inning complete game in a 6-3 victory over the Scarlets on Thursday at Dehler Park on Senior Night to conclude the regular season.

The Royals' Aiden Montez, left, is congratulated by his teammates after he scored on Thursday against the Scarlets at Dehler Park.