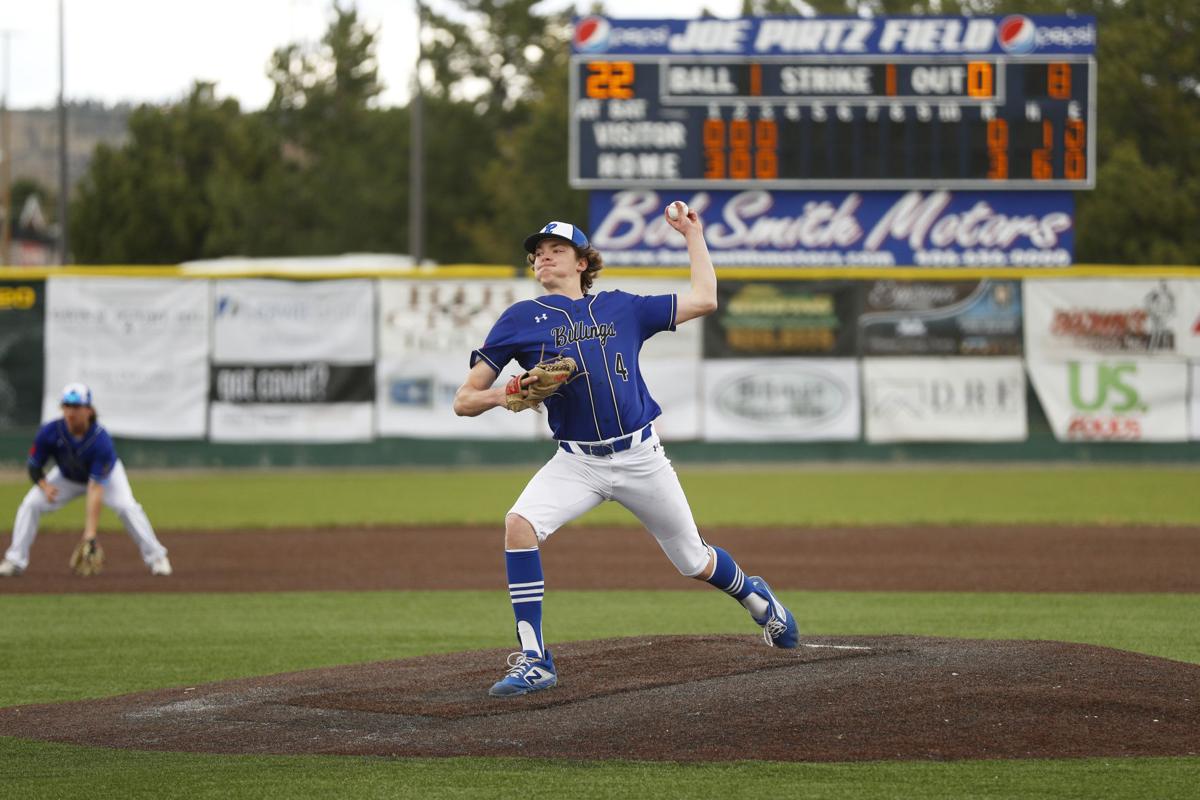 The Billings Royals’ Reagan Walker delivers a pitch against the Missoula Mavericks Saturday at Pirtz Field. 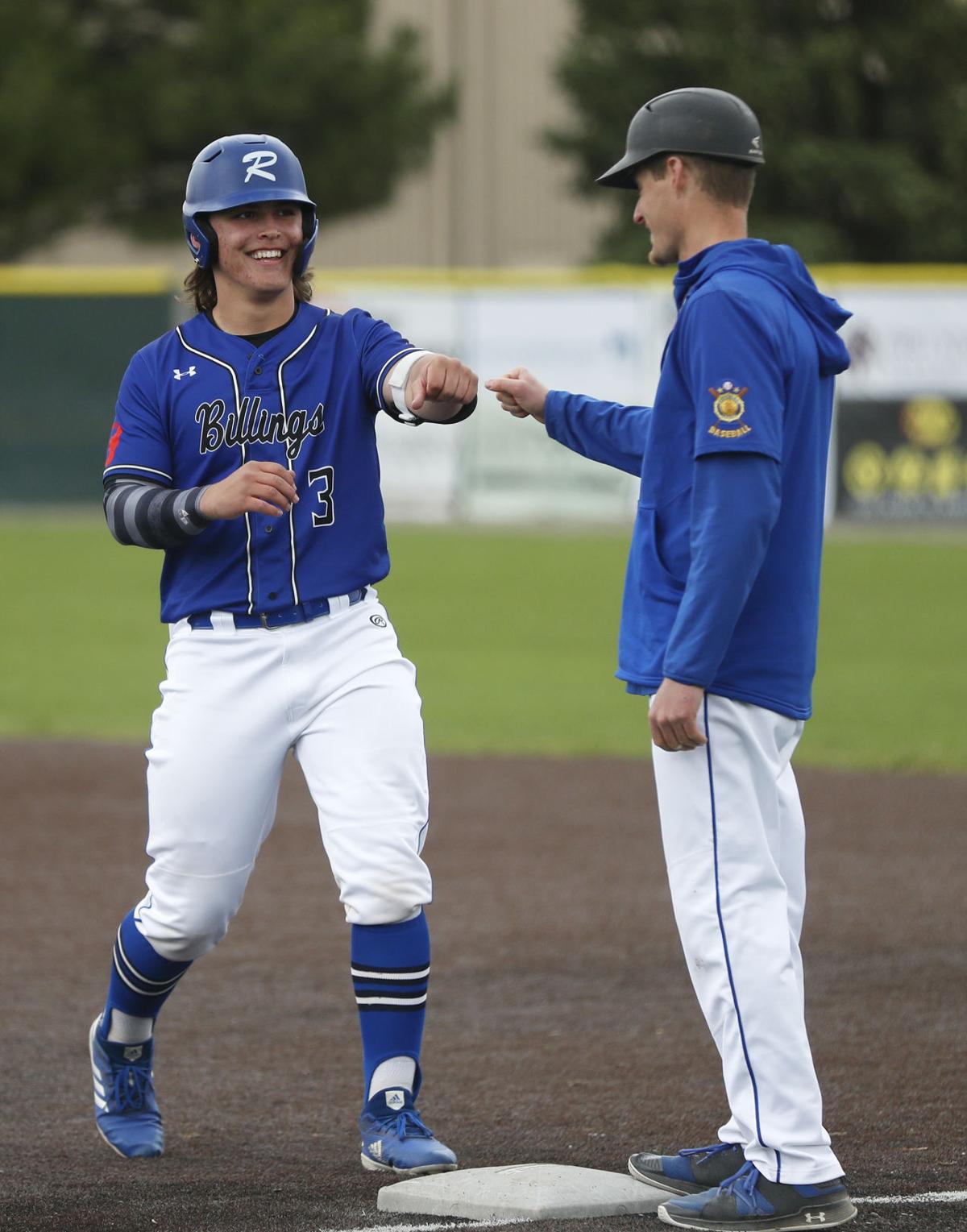 The Billings Royals’ Michael Ohlin fist bumps his first base coach after hitting a single against Missoula at Pirtz Field Saturday.

BILLINGS — While the Billings Royals were wrapping up their ninth game of the American Legion baseball season Saturday at Pirtz Field, the Billings Scarlets were watching from behind the fence preparing for their season opener.

The late start is by design. Coach Adam Hust wants to give the basketball players and wrestlers on his team extra time to prepare for baseball, and he’s been through enough Aprils in Montana to know that games are as likely to be postponed by wet weather than they are to be played.

“We typically wait until the beginning of May just so that we make sure our arms are in shape and everybody stays healthy,” Hust said. “I don’t need to start in April and play in this type of weather. It’s unproductive, and these guys get cold and then they complain and then I yell. It’s like, ‘I don’t want that relationship with them at this point.’”

“This type of weather” was, ironically, what the Scarlets dealt with Saturday: about 50 degrees, windy, the ground still damp from earlier rainstorms and threatening clouds on the horizon. The temperature got above 70 the previous three days and was similarly beautiful during portions of April. Hust joked that those April days would have been cold if he’d scheduled games on them.

The Scarlets used two six-run innings to earn a 12-9 comeback win over the Missoula Mavericks, and they lost the second 8-1 to Rapid City Post 22. Hust expects some ups and downs this season because his team is so young. That’s manageable for the 15th-year coach, who’s relieved to embark on a season with much more certainty than the last.

The Scarlets graduated six seniors from last year’s team and have one senior on the 2021 roster (Jackson Schaubel, a freshman on Dickinson State’s baseball team, will rejoin the Scarlets next week). They’re beginning this season with a freshman and two sophomores starting in the infield, and their outfield is brand new.

Saturday’s win showed that youth and success don’t have to be mutually exclusive.

Wagner is a good example of a young player helping his team win. The right-hander allowed two earned runs in 6 ⅔ innings in a 5-3 victory over the Bozeman Bucks on Aug. 8, 2020 to keep the Scarlets’ season alive and get them two wins away from a Class AA state title (they lost to Helena a day later).

State was the last stop of last season for all Montana legion teams because regionals and the World Series were canceled due to COVID-19. Montana was one of six states to play a Legion season.

This season will still be affected by the pandemic, from stricter rules in other states to Alberta teams being barred from playing in Montana (and vice versa) because of travel restrictions. But regionals and the World Series will be back, and this season wasn’t delayed until June like 2020 was.

“We’ve actually got some trips we get to go on and we get to go play in some tournaments, which we didn’t get a whole lot of last year. So they’re excited just to play a 55-to-60-game season and go over different parts of the country,” Hust said. “It definitely takes a lot of things off your mind when you’re not worried about the COVID. We’ll end up in places where I’m sure there will be a lot of restrictions still and we’ll have to follow the rules, but that’s fine. We’re just lucky to be playing.”

Wagner said he and his teammates were not intimidated by their rival’s 9-0 start to the season, but it’s been impossible for them to ignore.

That was especially true Saturday as the Scarlets watched the Royals handle Missoula 11-2 at Pirtz. The win was a microcosm of the Royals’ season thus far — a strong pitching performance, clean fielding and good hitting up and down the lineup.

“I don’t think we ever expect to come out and go undefeated for our first nine games,” said Royals coach David Swecker. “We’re playing good defense right now, and we’re throwing strikes, so it’s tough to beat us.”

Reagan Walker started on the mound against the Mavericks on Saturday and allowed two earned runs on four hits and one walk with eight strikeouts in five innings. The Royals’ lineup tallied 13 hits, led by a 3-for-5 output from Lance Schaaf, who has arguably been his team’s best pitcher this spring.

Other than two one-run wins, the Royals have been dominant in their first nine games, compiling a plus-44 run differential (nearly five runs per game).

It’s hard for Swecker to point out one or two key players because so many have performed well. In addition to Walker and Schaaf, Gunner Thompson has delivered good outings on the mound. Jaeden Jordahl, Jessen West, Davis Mosier, Michael Ohlin (a Dordt University signee) and Burke Steppe are just some of the players who have succeeded at the plate.

“We have a lot of good energy,” Walker said. “We don’t have any bad attitudes on the team.”

The Royals are doing all of this without one of their best players, Eli McCoy, who underwent shoulder surgery and is out for the season, Swecker said. McCoy, a left-handed pitcher and first baseman, has signed to play at Bethel University.

Swecker praised this year’s seniors and the many players who helped the Royals’ feeder program, the Billings Blue Jays, win the State A title last season (Walker, a senior at Billings Senior, pitched all six innings in the Blue Jays’ 11-1 championship victory over Lewistown).

Countries that have never won an Olympic medal

Countries that have never won an Olympic medal

Will the Saints make the playoffs?

Will the Saints make the playoffs?

Laurel finishes in first place in the Eastern A.

The Royals have now won 16 consecutive games, and remain red-hot toward the end of the season.

Sheridan Troopers pitch, then hit their way past Billings Scarlets for sweep

Sheridan pitchers threw a one-hitter in the opener, then the Troopers had a 16-hit performance in the second game.

Wagner allowed six hits in a 4-1 win as the Scarlets split a doubleheader with Sheridan, Wyoming.

The Billings Royals’ Reagan Walker delivers a pitch against the Missoula Mavericks Saturday at Pirtz Field.

The Billings Royals’ Michael Ohlin fist bumps his first base coach after hitting a single against Missoula at Pirtz Field Saturday.