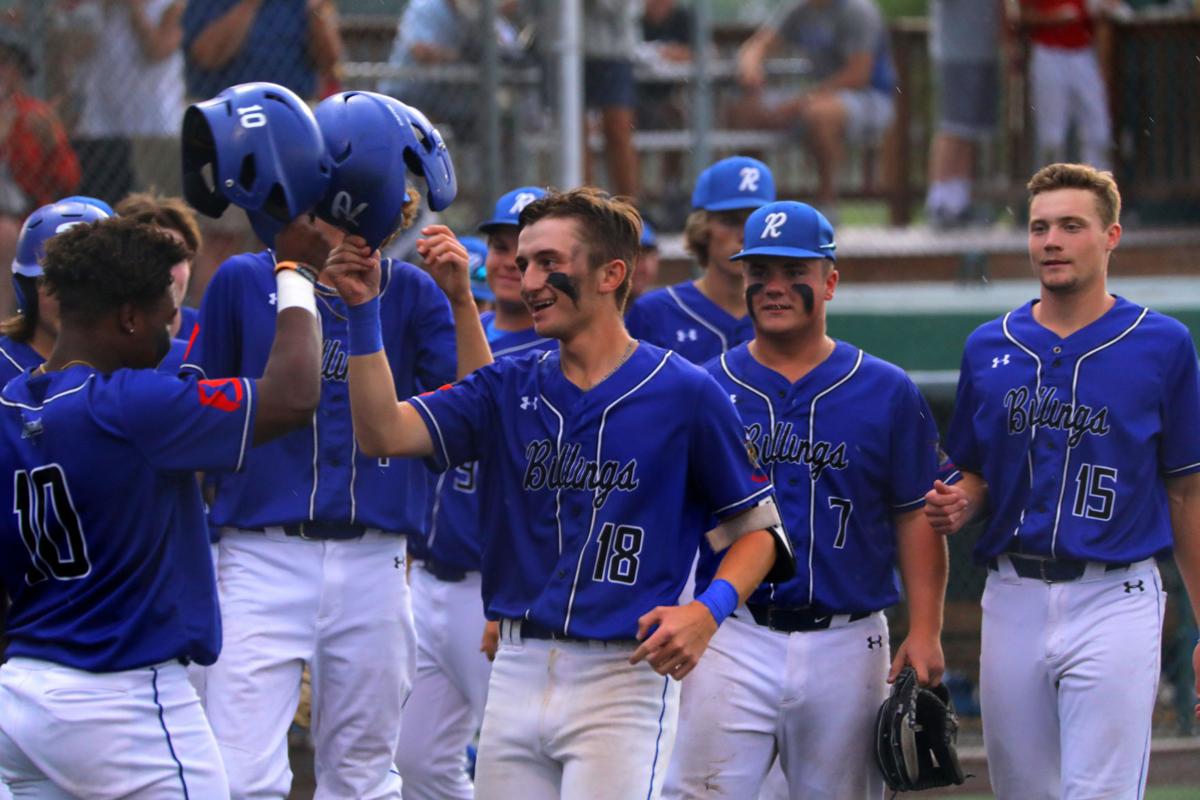 The Royals’ Jaeden Jordahl is greeted at home after hitting the first home run of his Legion career, a two-run shot against the Scarlets on Tuesday at Pirtz Field. 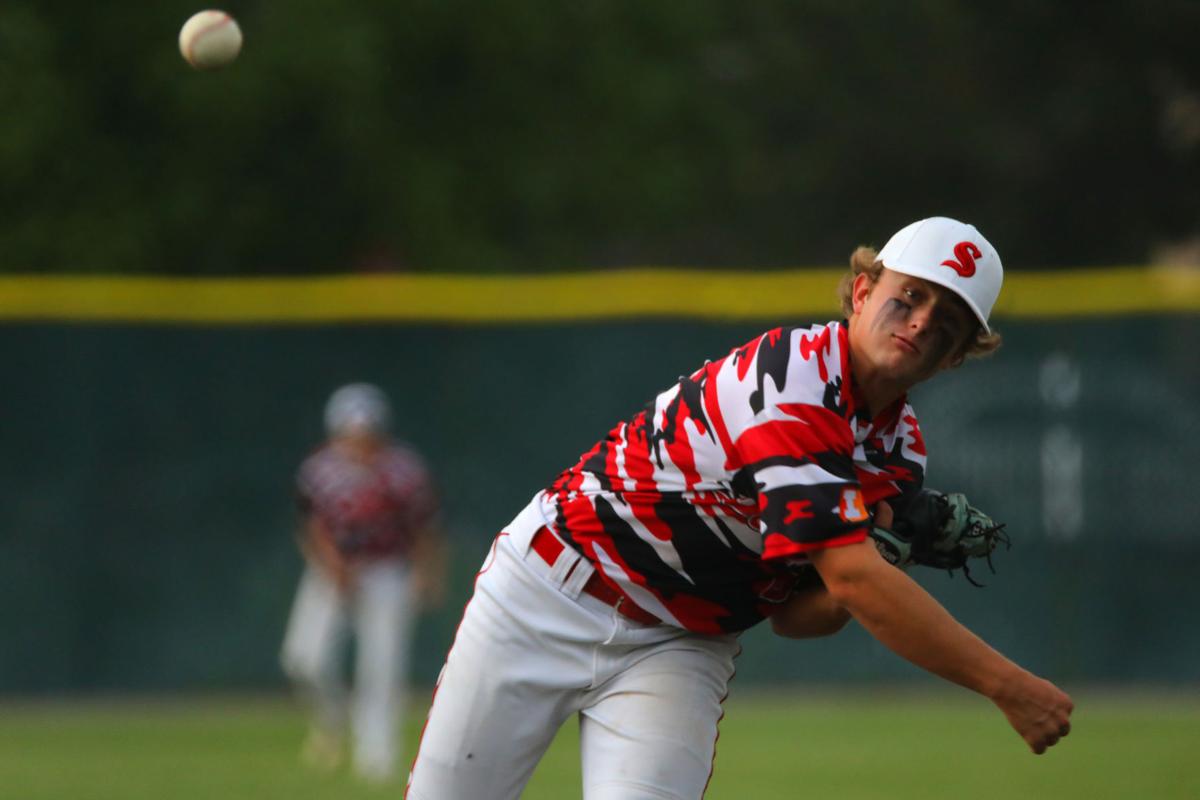 The Scarlets’ Spencer Berger delivers a pitch against the Royals on Tuesday at Pirtz Field.

Jordahl, a super-senior in his final season of eligibility, turned on an inside delivery from Billings Scarlets starter Spencer Berger in the third inning, and the ball carried high over the left-field wall to give the Royals an early lead in what was a 5-1 victory over their crosstown rival.

With a slight build and a level swing, a slick glove and speed on the base paths, Jordahl knows you don’t have to put up big power numbers to affect a baseball game — or an entire season.

Still, there’s no doubt his homer was special, as it helped the conference-champion Royals win for the 16th consecutive game. But why did it take so long?

“I’ve hit a lot of balls this year that have been hit pretty deep to the track, but I hadn’t hit anything like that yet,” Jordahl said. “Inside pitch, I just got my hands through it. I didn’t really think it was gone off the bat. It feels good.”

“He’s been a close a few times, so I thought by the end of the year he might get one,” said Royals coach David Swecker. “He’s a middle shooter for the most part. He doesn’t try to take a lot of big swings. But I think he got a pitch he could hammer and he took advantage of it.”

Jordahl finished 3 for 4 with two runs and three RBIs. He delivered an RBI single up the middle in the seventh that gave the Royals a 3-1 lead. He also stole both second and third after reaching base and later scored on Austin Schaaf’s single. Michael Ohlin also added an RBI in the inning.

The Royals improved their overall record to 47-10, and their conference mark to 19-1. They defeated the Scarlets in five of seven meetings this season. The Scarlets are now 22-28 overall and 7-15 in the league standings.

“Those guys take advantage of their opportunities,” Scarlets coach Adam Hust said. “If you don’t do the same you’re going to be playing from behind, and then it’s tough.”

Hust’s club was in prime position for a big inning in the fourth when Rocco Gioioso and Jaiden Turner each reached base to start the frame. But a crucial call went against them.

Luke Tallman’s bunt attempt rolled into foul territory and it was originally ruled that the ball had touched the glove of diving Royals pitcher Burke Steppe. For the time being, the Scarlets had the bases loaded and nobody out. But the call was changed to a foul ball after the umpires huddled — despite Hust’s protests — and Tallman eventually struck out.

Jaden Sanchez later hit an RBI single that scored Turner, but the Scarlets twice got caught wandering off the bases and were thrown out each time, which ended the inning.

“The bottom line is we’ve got to do a better job of executing. Couple bad bunts, a couple bad base running mistakes that cost us,” Hust said. “If we clean those things up it’s a whole different ballgame. I felt like we were in it.”

Base running was clearly a factor. In all, the Royals stole eight bases and were caught stealing only once.

As for Jordahl, his father Jason was a member of the Scarlets team that won the state championship in 2000. Hust joined the coaching staff a few years after that and didn’t cross paths with Jason until the two played slow-pitch softball together.

Hust’s daughter was born at the same time as Jaeden, and Hust says he and Jason are good friends.

“I’m glad to see his son is having success,” Hust said.

Unfortunately for Hust it came at his team’s expense on Tuesday. Swecker, though, loves to see it.

“He plays the game hard, he plays the game the right way, and I think a lot of people respect that,” Swecker said of Jordahl. “It leads to the rest of our team wanting to play baseball the way he does, and leads to us winning a lot of baseball games.”

Truly, the Royals are streaking toward the state tournament. The Scarlets still have time to right their ship. Both teams have more games upcoming.

The Royals travel to Kalispell for four conference games Friday and Saturday to finish the regular season. The Scarlets will close this week with four games versus the Sheridan Troopers, and two versus Great Falls.

The Blue Devils and Dodgers will both advance to the State A tourney in Havre.

Glendive reaches championship game at Eastern A; Miles City, Laurel still in it

The all-state shortstop will be joining the Miles Community College Pioneers.

The Royals’ Jaeden Jordahl is greeted at home after hitting the first home run of his Legion career, a two-run shot against the Scarlets on Tuesday at Pirtz Field.

The Scarlets’ Spencer Berger delivers a pitch against the Royals on Tuesday at Pirtz Field.