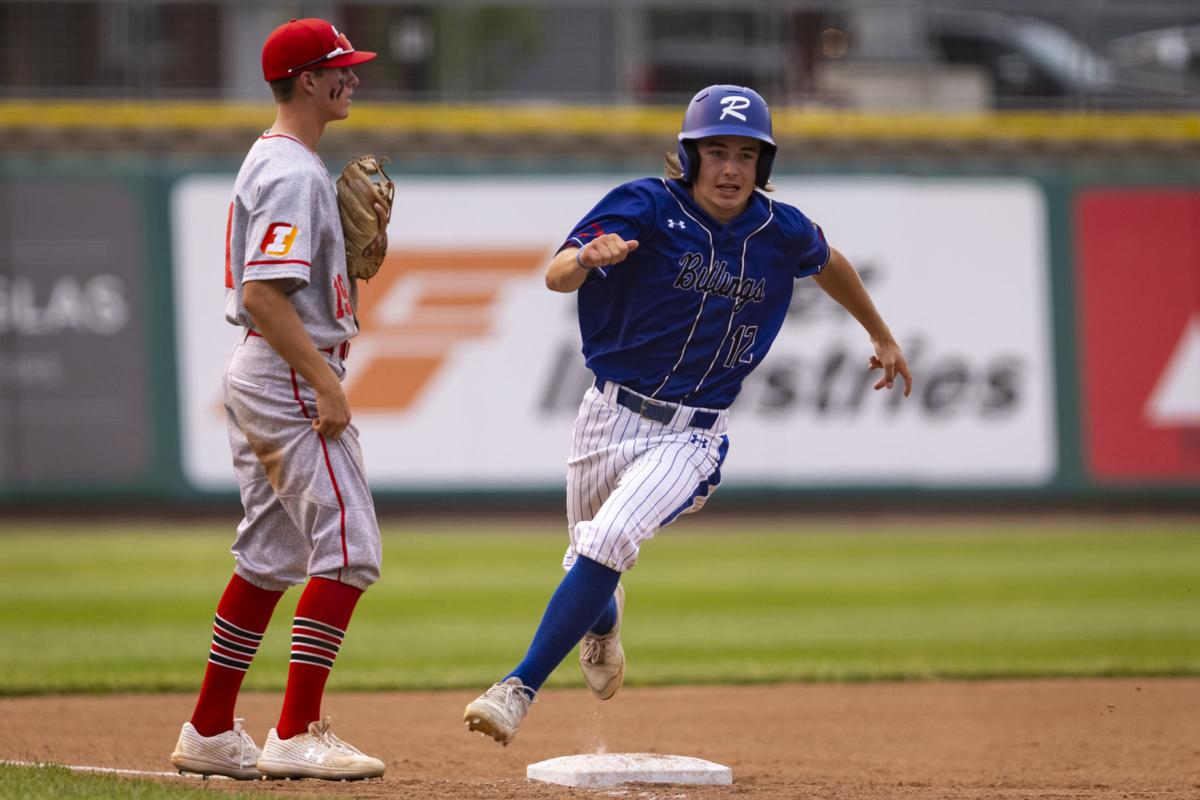 The Royals' Austin Schaaf rounds third on his way home during a crosstown doubleheader with the Scarlets at Dehler Park on Thursday. 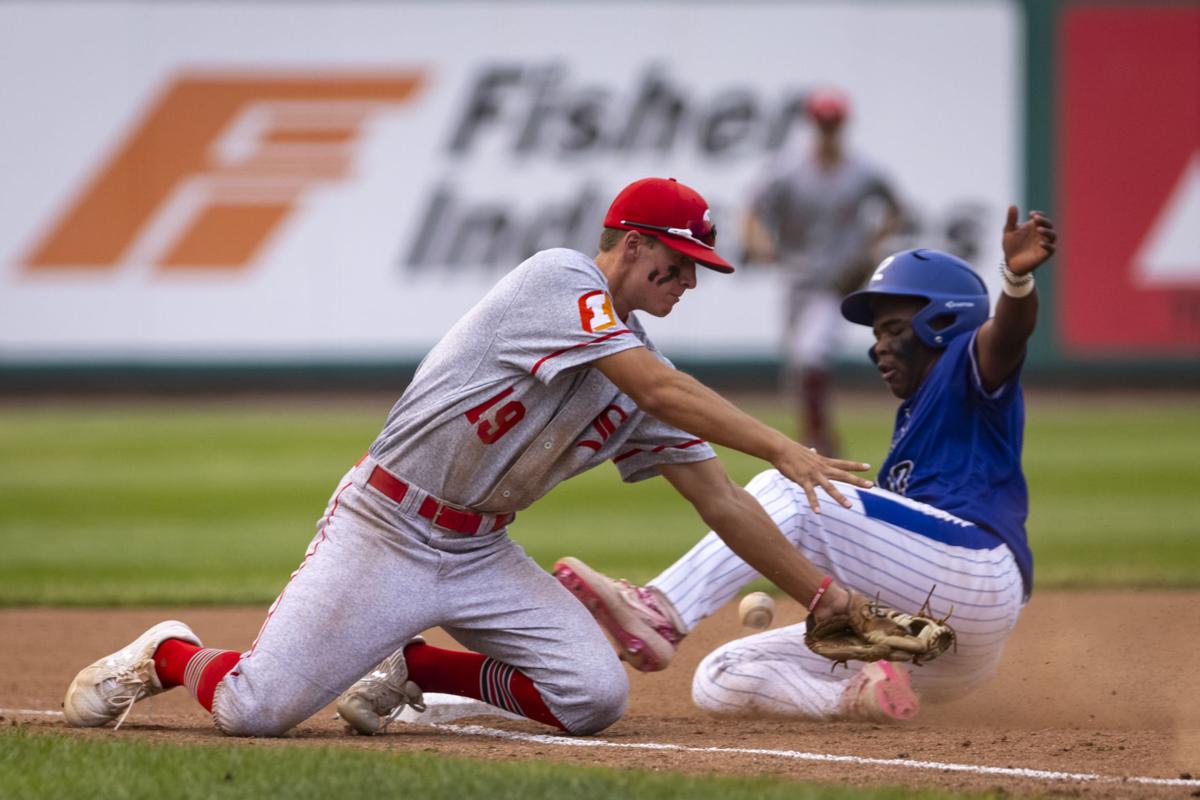 The Royals' Bubba Bergen slides into third as the ball gets away from the Scarlets' Nate McDonald during their doubleheader on Thursday at Dehler Park.

BILLINGS — If the goal is to play your best baseball toward the end of the season, the Billings Royals are sizzling like the July heat.

The Royals let their bats do the talking on a hazy Thursday night in a doubleheader with their crosstown nemesis, the Billings Scarlets, throwing crooked numbers on the scoreboard in both games en route to a sweep at Dehler Park.

The Royals won the opener 16-6 and took the second game 7-1, and have now won four of six matchups with the Scarlets this season. More importantly, the Royals ran their winning streak to 15 games and show no signs of slowing down with the state tournament looming at the end of the month.

“This is our best baseball so far, but we’re not even close to our best yet, I don’t think,” said Kruz Slevira, who had four hits, scored twice and drove in six runs combined for the Royals. “I can’t wait for the state tournament to see what that brings out of us.”

The Royals “are playing as a team and they’re playing hard,” Scarlets coach Adam Hust said. “They play for each other, they play well, and when you get on a roll good things happen. They’re beating everybody, not just us.”

The Royals improved their record to 46-10 overall and 19-1 in the conference. The Scarlets, who saw a modest three-game winning streak come to an end, slipped to 21-24 and 6-11.

Putting the rivalry aside, Thursday was also a celebration of the graduated seniors playing in the Billings American Legion program. The Royals have seven of them: Slevira, Burke Steppe, Payton Stidham, Max Keller, Michael Ohlin, Gunner Thompson and C.J. Bohn. The Scarlets have one: Michael Feralio.

Each senior was recognized and announced with their families and friends between games, and a commemorative slideshow played on the Dehler Park video board.

Typical of the occasion, awards were handed out. The Les Smith St. Vincent Healthcare Award, given to the players that best exemplify character, citizenship, leadership, teamwork and sportsmanship, went to the Scarlets’ Feralio and the Royals’ Ohlin.

The annual $1,500 scholarship gifts were doled out to Feralio and the Royals’ Stidham.

“This program has given a lot to a lot of kids and a lot of families in this community,” Hust said. “To have a night like this where we all get to celebrate it together win, lose or draw, it’s just a good night all in all for the program and for the kids and their families.”

Baseball-wise, the first game was a Class AA conference affair, and the Scarlets were the aggressors at the outset, scoring two runs in the top of the first as Rocco Gioioso singled in Nate McDonald and later scored on an error for a 2-0 lead.

But it was short-lived. The Royals put up three in the bottom of the first, 11 more in the second and two in the third. Among the highlights was a two-out, two-strike, two-run single from Jaeden Jordahl that made the score 10-2 in the second.

Davis Mosier followed that with a bases-loaded double to right that scored three runs. When the smoke cleared (so to speak) — after the Scarlets countered with three in the top half of the third — the Royals were up by 10 runs, which decided the game via the mercy rule after in the fifth.

The trend continued in Game 2. The Royals scored five times in the second, punctuated by Slevira’s two-RBI single. They added another run in the third on another run-scoring hit by Slevira. Jordahl had an RBI triple in the fifth.

The Scarlets got a run back in the sixth when Kolten Wynia delivered an RBI double, but the game otherwise belonged to Royals starter Max Keller. The lanky right-hander spun a complete-game gem, allowing five hits and one unearned run through seven innings. He struck out two and didn’t allow a walk.

“Really everything,” Keller said. “I was just pounding the zone and trying to force outs. I wasn’t trying to blow it by them. I was just giving them pitches to hit and it worked out.”

The defensive play of the night happened in the bottom of the sixth inning of the second game, when Wynia robbed the Royals’ Ohlin of a base hit with a diving catch in center field.

The teams will play each other again Tuesday at Pirtz Field, though each still has important games left on the schedule.

After Tuesday, the Royals travel to Kalispell for four conference games. The Scarlets have four league contests in Missoula this weekend and close the regular season with games against Sheridan, Wyoming, and Great Falls.

Right now, with the season in the homestretch, the Royals are rolling and the Scarlets are seeking consistency.

“We’re just dedicated. Every practice we grind, grind, grind,” Keller said. “We want to win that state championship and go to regionals.”

“We just need to play and figure out what we’re doing,” Hust said of his Scarlets. “We need to get focused and get into the games and learn what it takes to win regardless of who we’re playing. Hopefully that helps us in the next two weeks and when it really matters.”

The Blue Devils and Dodgers will both advance to the State A tourney in Havre.

Glendive reaches championship game at Eastern A; Miles City, Laurel still in it

The all-state shortstop will be joining the Miles Community College Pioneers.

The Royals' Austin Schaaf rounds third on his way home during a crosstown doubleheader with the Scarlets at Dehler Park on Thursday.

The Royals' Bubba Bergen slides into third as the ball gets away from the Scarlets' Nate McDonald during their doubleheader on Thursday at Dehler Park.