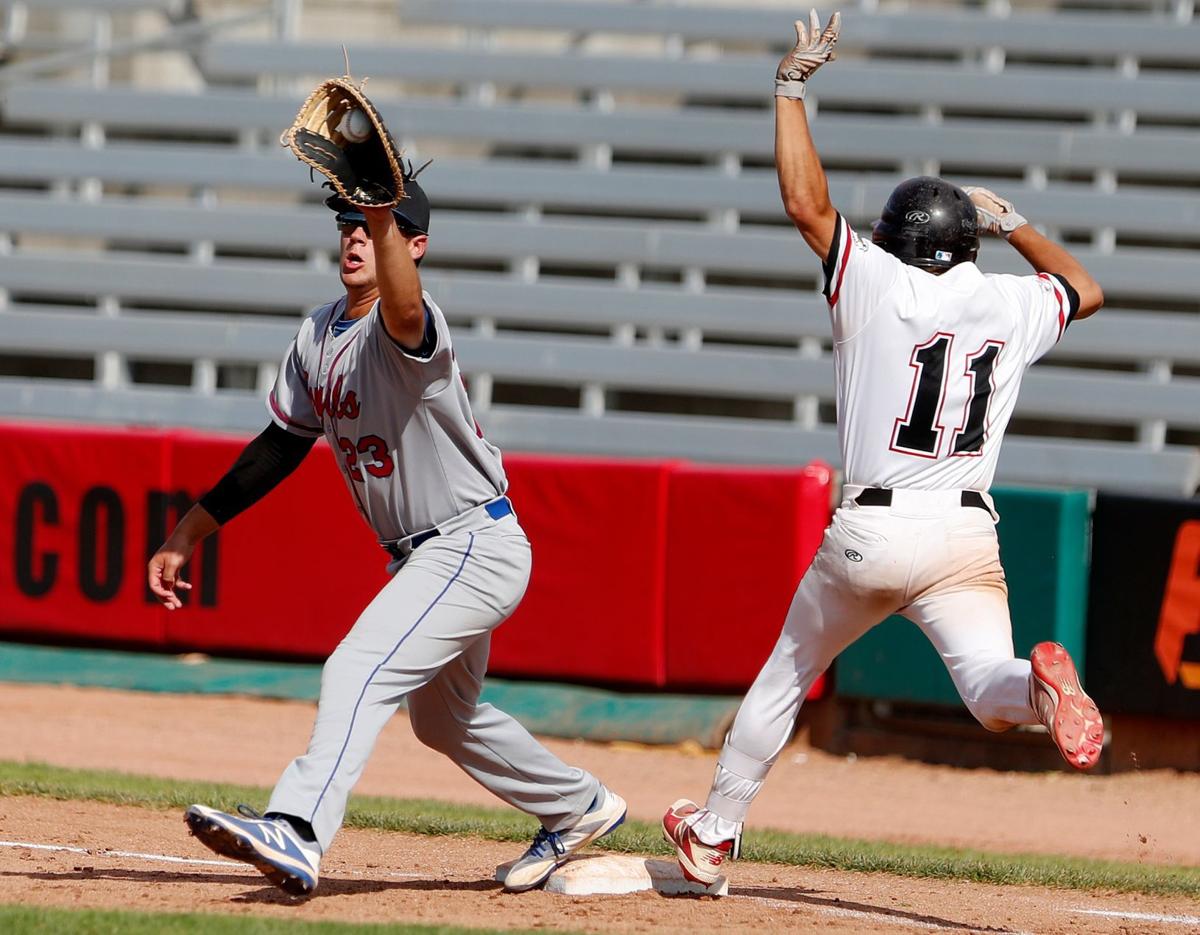 Billings Royals' Dann Blanchard makes the catch for an out against Lethbridge Elks' Noah Wauters in the fourth inning of the Montana/Alberta American Legion Class AA tournament at Dehler Park on Tuesday. 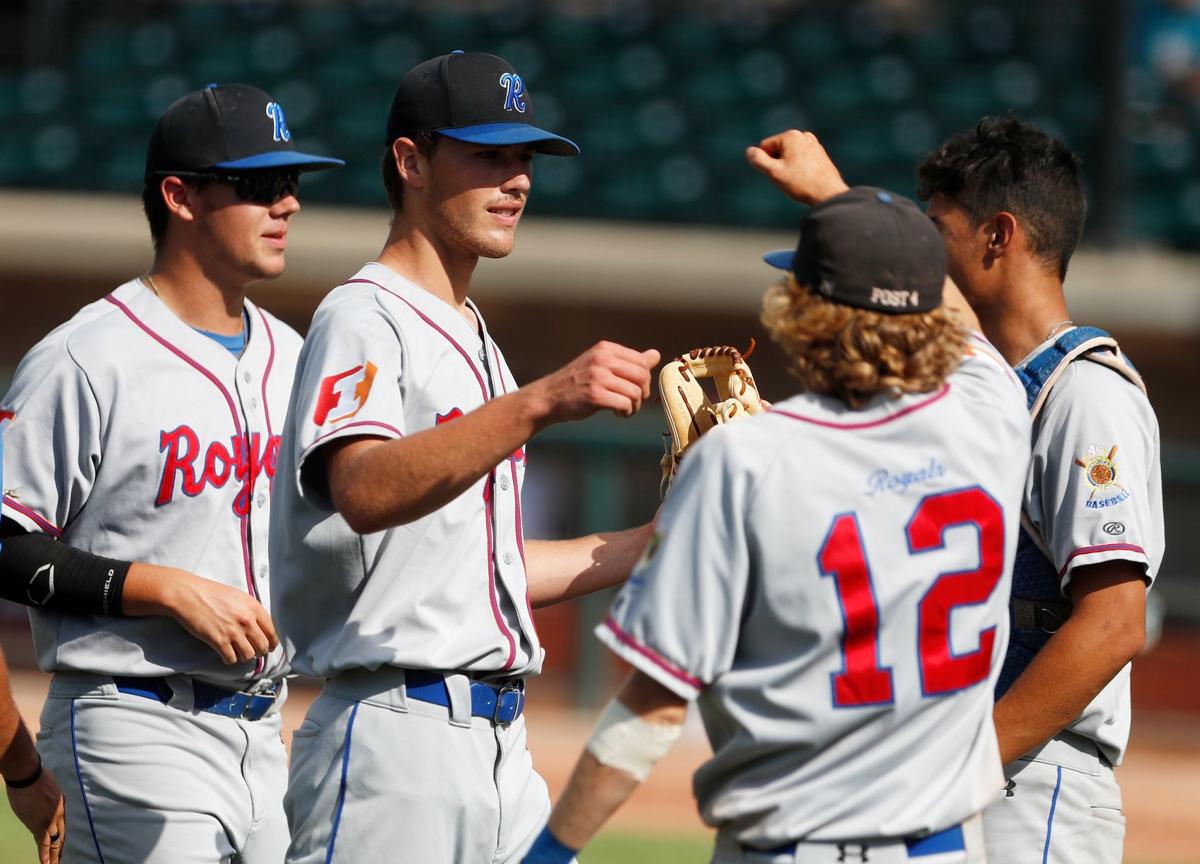 Billings Royals pitcher Cole Miller (7) is congratulated after an inning against the Lethbridge Elks at the Montana/Alberta American Legion Class AA tournament at Dehler Park on Tuesday, July 30, 2019. 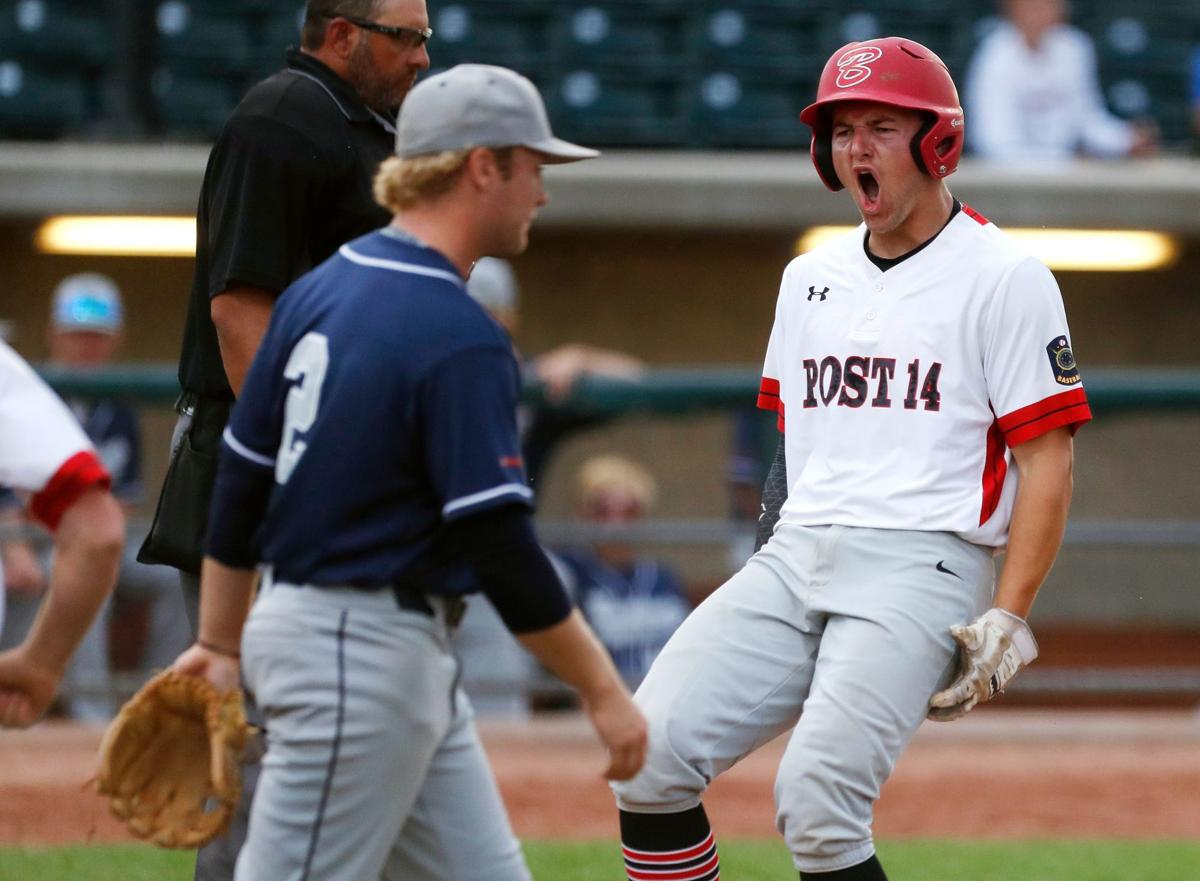 Bozeman's Zander Petrich celebrates as he scores on a double by Finn Snyder as Missoula Mavericks pitcher Stuart Long walks back to the mound in the third inning of the Montana/Alberta American Legion Class AA tournament at Dehler Park on Tuesday.

BILLINGS — The bases were loaded with only one out, his team clinging to a one-run lead in the bottom of the seventh, and Billings Royals head coach Bryan Benjamin thought one thing as Lethbridge clean-up hitter Brendan Schulz hit a multi-hopper to shortstop.

Tie game, Benjamin thought, thinking the ball wasn’t hit hard enough and meaning the Elks would push across the tying run with the Royals getting just the one out. Instead, Royals shortstop Connor Hunter flipped to second baseman Jaeden Jordahl for a force, and Jordahl fired to first baseman Dann Blanchard.

Schulz, who had three singles in his three previous at-bats, was digging down the line. Lethbridge players and coaches thought ‘tie game’ as well as Schultz crossed the first-base bag, but instead, he was called out on a bang-bang play. The game-ending twin killing left the Royals with a 4-3 win, giving them another day and at least one more game at the State AA American Legion baseball tournament.

With the win, and Bozeman’s 13-5 win over Missoula later in the night, means the Royals and Bucks will meet in Wednesday’s championship round. The title game is set for 4 p.m. at Dehler Park, but should Bozeman, which is still unbeaten in the tournament, lose, a second game with a 7 p.m. start will be necessary.

With the game possibly on the line, the Royals’ Hunter said he was prepared to have the ball hit to him. And then it was.

“When it comes like that in a big time game, it’s always like, ‘uh, oh’ “ Hunter said. “But you have to stick with your game plan stick with what you know.”

The Royals and Elks know each other well. They’ve met five times in the past two state tournaments — including last year’s title game — and each time the game’s been tight.

Though Elks skipper Scott Oikawa thought the call at first was incorrect, and he felt that his team’s first loss of the tournament was due to “questionable calls,” he was also philosophical about Tuesday’s outcome.

“We had opportunities early, but the Royals did a nice job, they cashed in some runs when they could,” Oikawa said. “The last couple years have to get past the Billings Royals’ mystique.

“Unfortunately, history repeated itself in this one. It’ll leave a bitter taste but hopefully our kids can hold their heads high and I think they represented the program well. It’s just part of the game.”

Nick Eliason had two hits and two RBIs and earned the save despite giving up two hits, a hit batter and run. Royals starter Cole Miller left the game after walking the first batter to open the seventh, allowing three runs and seven hits. But he limited the damage when he needed to.

“That’s the way he’s been for us,” said Benjamin, whose team will be looking to defend its title. “He’s a senior, he came out in the huge moments and came up big for us and that’s what I expect from my seniors.”

Dann Blanchard hit a high homer to left in the top of the fifth to break a 2-2 tie, and the Royals added another run four batters later when Eliason snuck home during a rundown play.

Kalem Haney and Ty Penner drove in runs for the Elks.

There was just no let up from the Bucks, who knew before the game, win or lose, they’d play in Wednesday’s championship game. Still, seemingly with little on the line Tuesday night, Bucks players were on the top step of their dugout cheering loudly from the first pitch on and kept up their intensity all game.

“Day four is kind of a tough battle for sure,” Bozeman head coach Garrett Schulz said, “because you’re playing someone that has one loss and is fighting for their life and we’ve already got that spot in the championship game.

“We tried to keep our foot on the gas pedal. We know how good Missoula is, that’s a good, well-coached ball club. So to come out and really swing the bats and get after them like that was a nice job by our guys.”

By eliminating Missoula behind a 12-hit attack, the Bucks and leadoff hitter Kelher Murfitt continued their hard-charging tournament ways.

Murfitt, who entered the game having reached base nine times in 13 tournament plate appearances, went 3 for 6 (though he was on base twice due to Missoula errors) and scored two runs. Finn Snyder drove in three runs, Zander Petrich and Preston Fliehman drove in two runs each, and pitcher Brady Higgs did enough through six innings before Drew Roberts took over to keep the Mavs at a safe distance.

Bozeman scored four times in the top of the first, and though Missoula answered with two runs in their half of the inning, the Bucks were dissuaded. They added four runs in the fourth, three in the fifth and two in the sixth.

Mavericks head coach Brent Hathaway pulled out all the stops, using four pitchers to stem the tide. But the Bucks, who are looking for their first state title since 2007, just kept rolling.

“Our guys are hungry for sure, hungry and excited,” Schulz said. “We’ve had some heartache for sure. We went two-and-out last year and our guys lost in the championship two years ago. Some of those guys that have been around for a couple years are hungry and really want this right now.”

Brendan Hill had two hits, an RBI and a stolen base for Missoula, and Charlie Kirgan contributed two doubles among three hits. Overall, Missoula, which entered the tournament as the top seed, had nine hits, five for extra bases.

“Honestly, I was pretty proud of the way we hit the ball tonight,” Hathaway said. “But we didn’t pitch it well, made some critical mistakes that cost us big time. Like I told the kids, one game doesn’t define a season. We had a great year with these guys.”

Billings Royals' Dann Blanchard makes the catch for an out against Lethbridge Elks' Noah Wauters in the fourth inning of the Montana/Alberta American Legion Class AA tournament at Dehler Park on Tuesday.

Billings Royals pitcher Cole Miller (7) is congratulated after an inning against the Lethbridge Elks at the Montana/Alberta American Legion Class AA tournament at Dehler Park on Tuesday, July 30, 2019.

Bozeman's Zander Petrich celebrates as he scores on a double by Finn Snyder as Missoula Mavericks pitcher Stuart Long walks back to the mound in the third inning of the Montana/Alberta American Legion Class AA tournament at Dehler Park on Tuesday.