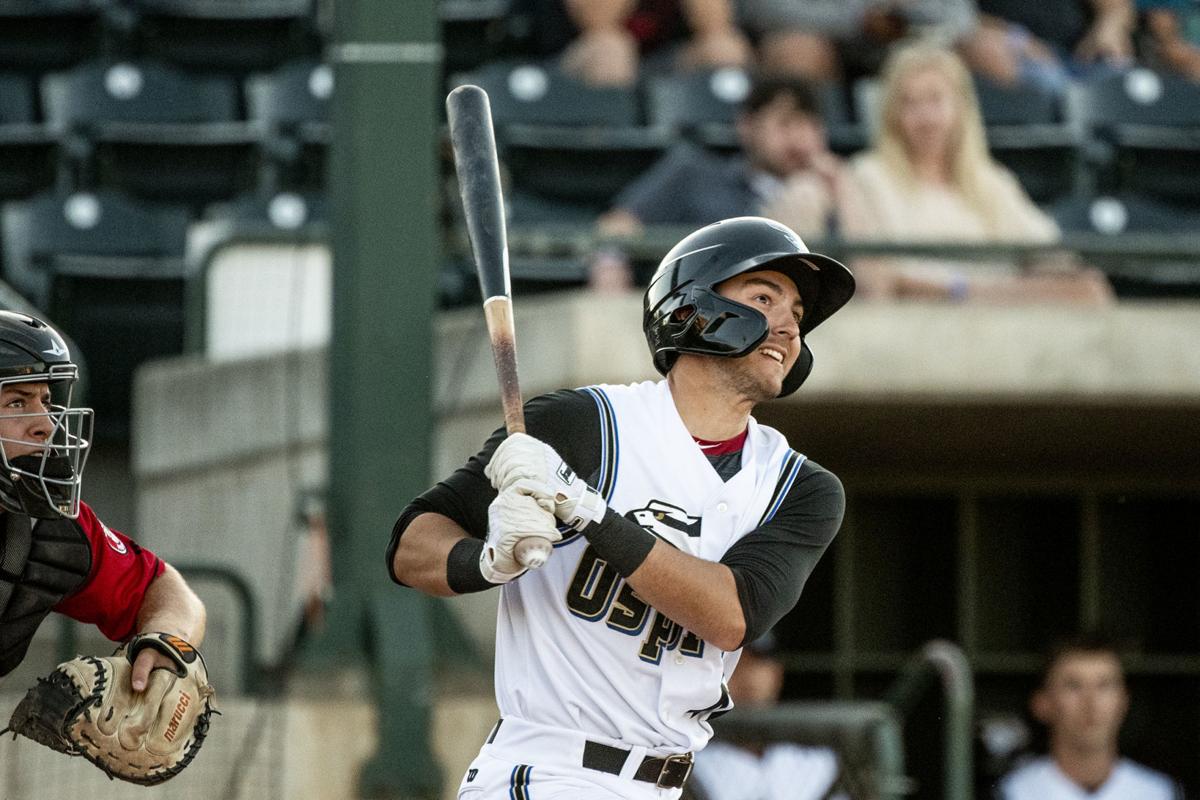 Osprey center fielder Dominic Canzone, right, watches as the ball flies into the outfield during Missoula's game against the Billings Mustangs at Ogren-Allegiance Park on Thursday night. 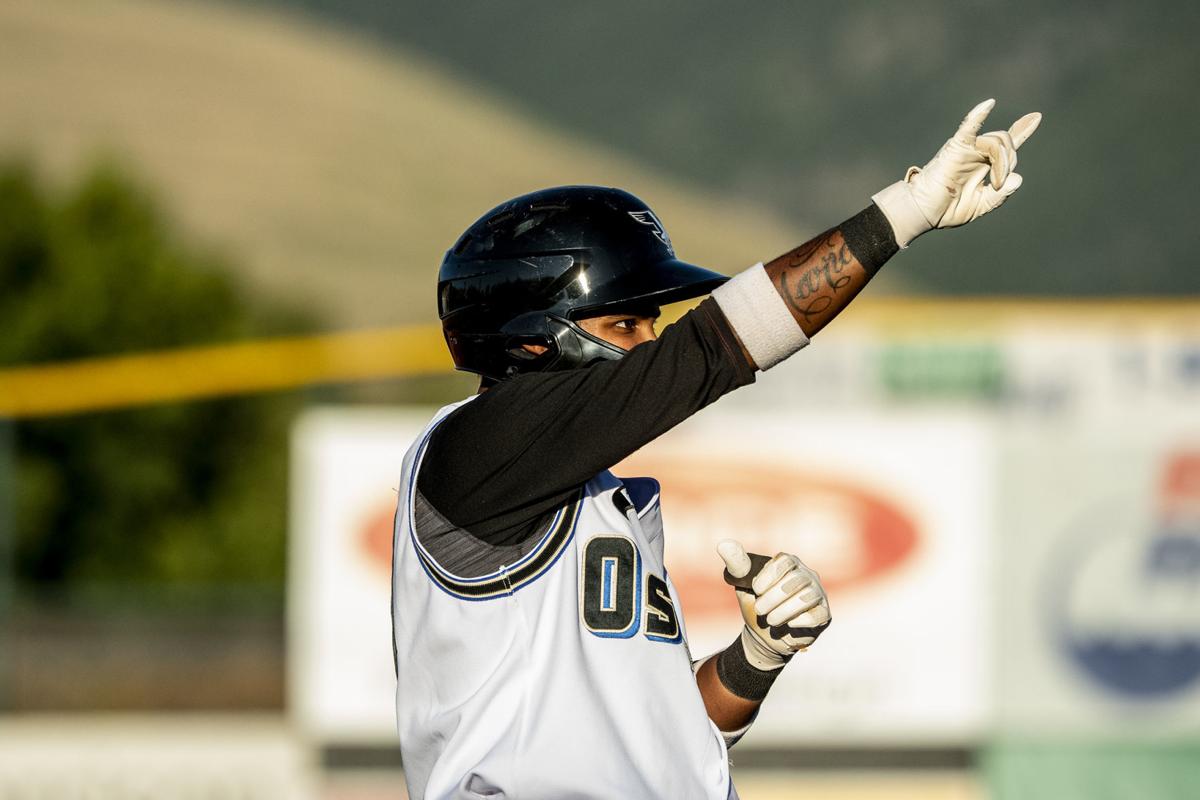 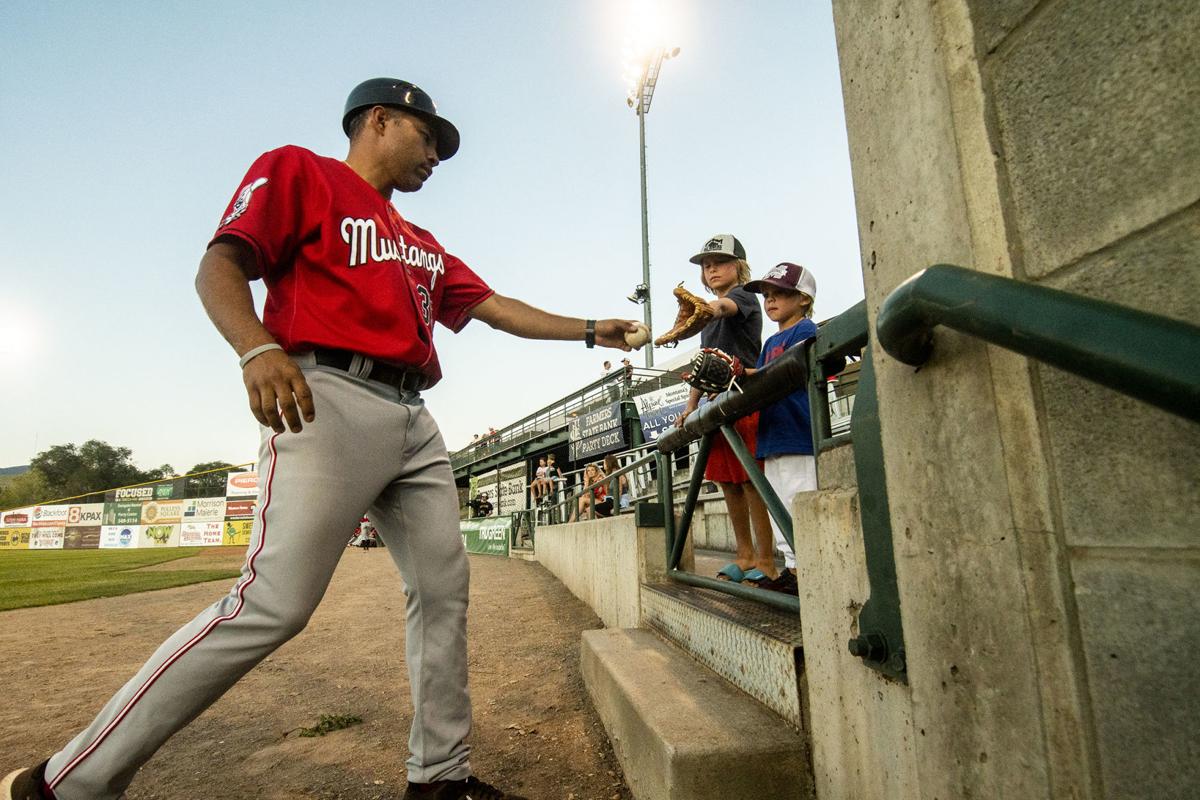 A Billings Mustangs coach hands off a ball to Erik Domitrovich, far right, after the end of the sixth inning at Ogren-Allegiance Park on Thursday night.

Osprey center fielder Dominic Canzone, right, watches as the ball flies into the outfield during Missoula's game against the Billings Mustangs at Ogren-Allegiance Park on Thursday night.

A Billings Mustangs coach hands off a ball to Erik Domitrovich, far right, after the end of the sixth inning at Ogren-Allegiance Park on Thursday night.

MISSOULA — Dominic Canzone is developing a reputation for delivering when it matters most on the baseball diamond.

He led Ohio State to a surprising Big Ten tourney title in late May, with the seventh-seeded Buckeyes stunning Nebraska in front of 17,000-plus pro-Husker fans in the finals in Omaha, Nebraska. Canzone was named to the all-tourney team.

Now the 21-year-old outfielder is providing clutch performances for the Missoula Osprey. He was 8 for 13 in the three games prior to Wednesday's loss, which ended his team's bid for a Pioneer League North first-half title.

Then on Thursday, Canzone smacked a two-run home run and a two-RBI double in a 13-11 comeback win over Billings.

Canzone says he thoroughly enjoyed the excitement of his first professional title push. Now he and the O's are determined to better their runner-up finish in the Pioneer League second half starting Friday.

"It was definitely a little more competitive this week, which I wish we could have been a little more like that through the entire half," said Canzone, who joined the Osprey in late June after being selected in the eighth round of the MLB Draft.

"I've really focused on getting my pitch to hit this week. I was swinging at a bunch of junk really at the beginning. A little bit anxious maybe. I just feel a lot more relaxed and I'm used to the routine now. I'm a big routine guy."

The Osprey start their second-half schedule with a home test against Billings. The goal is clear: Reach the postseason in September.

"We definitely have a lot of room for improvement and we have to start out stronger than we did the first half," said Canzone, whose batting average is hovering around .300. "We really did put together a nice second half of the first half. And we have a lot of talent on this team, which you've seen in a short amount of time."

Canzone was projected to be a fourth- or fifth-round selection in the June draft. He dropped to the eighth round, which cost him a good amount of signing bonus money.

Yet he carries no chip on his shoulder.

"It was a long day for sure, a tough day," he said of the draft. "But I'm really just grateful to be here. Nobody cares what round you're picked in now. You just have to compete every day."

One reason Canzone is playing so well now is he's healthy. He sat out an entire week in the middle of July with an injury. In his five games leading up to Thursday, he was 9 for 21 with two home runs.

All of which makes him feel good after opting to chase his baseball dream with a year of college remaining. The scholar-athlete plans on earning his sports industry degree in the next two or three years.

"I'd like to stay in the game in some capacity," he said of his intentions after his playing career is over. "Maybe teach about swings to the younger generation."

Canzone gave the Osprey their first lead in 19 innings when he ripped his two-run homer to right field off Billings starter Orlando Rodriguez in the first frame. Billings answered with two runs in the second, aided by errors by Missoula shortstop Jose Reyes and right fielder David Sanchez.

Reyes atoned for his error in the bottom half, ripping a bases-loaded triple that gave the hosts a 5-2 lead. But Missoula starting pitcher Josh McMinn surrendered four runs in the third, with Jonathan Willems delivering a two-RBI double and Edwin Yon a two-run homer.

Missoula (20-18) cut its deficit to 7-6 on a Garcia home run in the fourth. Billings answered with three in the sixth off reliever Nick Marchese.

The Mustangs (15-23) saw their lead dwindle to 10-9 in the bottom half. Reyes hit an RBI single and Canzone a two-RBI double.

Billings scored a critical insurance run in the eighth of reliever Jared Liebelt. TJ Hopkins singled, moved up on an errant pickoff throw and scored from second on a wild pitch/errant throw to third by the catcher, Lanza.

Lanza atoned for the play with a solo homer in the eighth. Francis Martinez then reached on an error, setting the stage for the most exciting play of the night. Kevin Watson hit a two-RBI triple to right field and scored when the relay throw sailed past Mustangs catcher James Free.

Ryan Fritze came on for Missoula in the bottom of the ninth and earned the save. It was a nice turnaround for him after he took the loss on Tuesday night.

Bill Speltz is in his 13th year as Missoulian Sports Columnist. He also guides the sports dept., scheduling day-to-day coverage. Do you have a story idea? Email Bill at bill.speltz@missoulian.com.