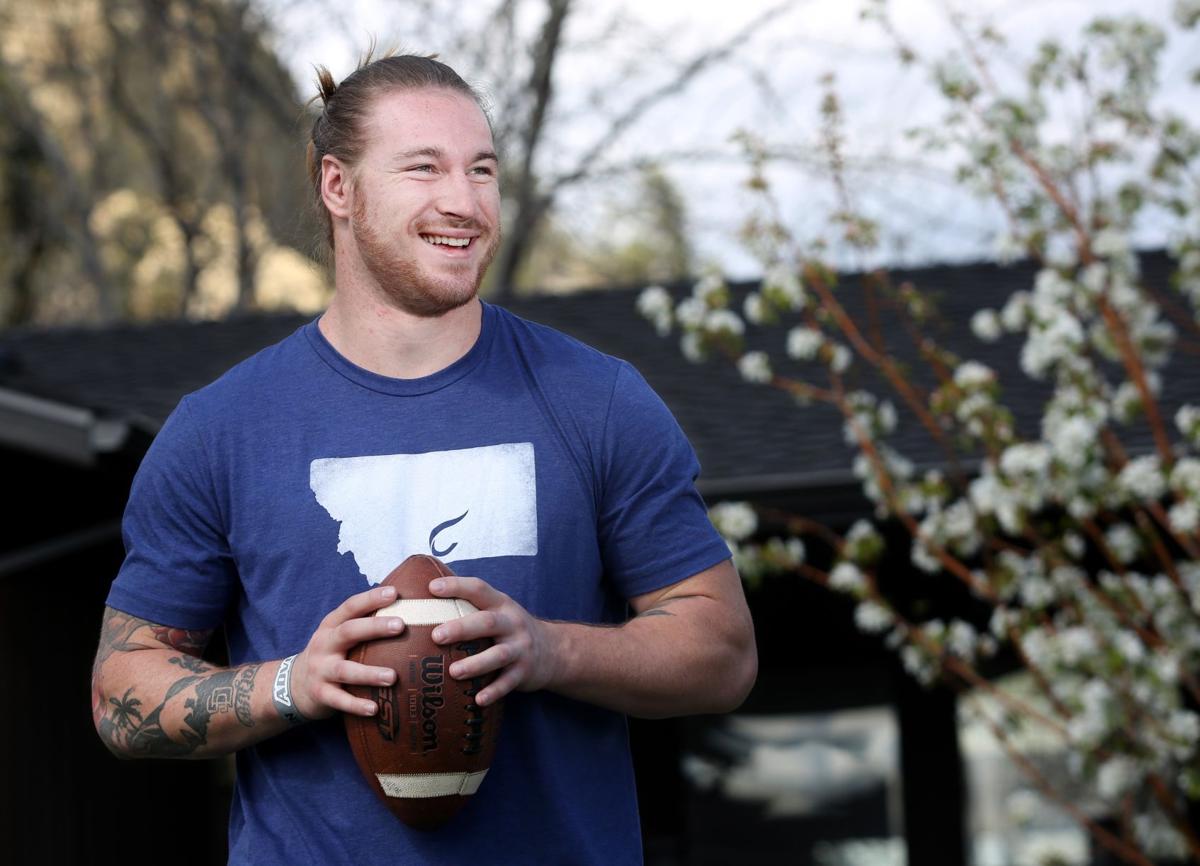 Dylan Donahue shares a moment with family and friends at the family's home in Billings on Saturday. Donahue, a graduate of Billings West, was drafted in the fifth round by the New York Jets. An All-American defensive end at West Georgia, he is projected to be an outside linebacker in the NFL. 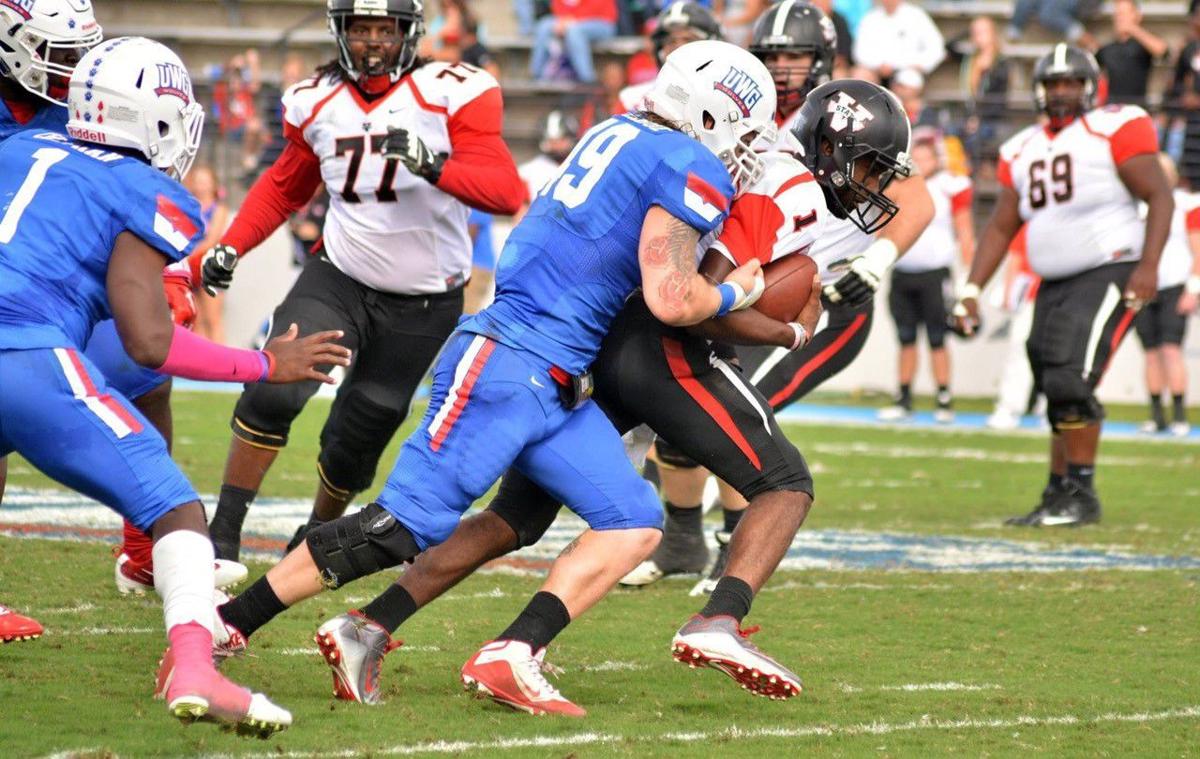 Those visiting the Donahue house on Saturday afternoon were greeted by Izzy, the family’s small white dog wearing a Denver Broncos jersey.

Now Izzy is going to need a new football wardrobe.

As well as the whole Billings family.

It was a day to celebrate as Dylan Donahue was selected by the New York Jets in the fifth round of the 2017 National Football League draft.

The 6-foot-3, 250-pound defensive end was the 181st player selected overall. He is projected to be an outside linebacker in the NFL.

Donahue, a 2011 graduate of Billings West, took the call from Kevin Greene, the outside linebackers coach for the Jets.

“He told me to bring my effort and my quickness and be ready to make some good things happen,” said Donahue, who also talked to a handful of other Jets’ coaches after being drafted.

He will leave Thursday for the Jets rookie mini-camp.

“I’m just thankful God has a plan for me,” said the personable, long-haired Donahue, who has taken a circuitous route to the NFL. “It all worked out for me. This was his plan.”

Donahue follows his father Mitch, who was a fourth-round selection in 1991 by the San Francisco 49ers. The elder Donahue, a two-time Western Athletic Conference Defensive Player of the Year for Wyoming, played two seasons in San Francisco and two seasons with the Broncos.

Dylan Donahue was born at the Stanford Medical Center when his father was with the 49ers.

The younger Donahue, known for his explosive first step, was the Gulf South Conference Defensive Player of the Year last fall for West Georgia, an NCAA Division II program. The defensive end set the single-season record for sacks (13.5) and holds the career record for sacks (25.5).

He was invited to the NFL Combine in Indianapolis earlier this spring and played in the NFLPA Collegiate Bowl in January.

“I was telling him you never know what’s going to happen,” said Mitch Donahue of the draft process. “Not to get frustrated. You have to be patient.

“I’m super happy. It all worked out for him. I’m officially a Jets fan.”

Dylan Donahue, who had been watching the draft with assembled family and friends, was actually separated from his phone when the call came.

“I was downstairs in my room,” he said. “I was getting tired of being hyped up all day. All that excitement of waiting was wearing on me.”

“I watched guys who I had played with and worked out with get drafted,” he said. “I was a little nervous.”

Donahue passed time outside with young family members and friends before taking a break and heading to his room.

An aunt, Ramie Meredith, was the first to hear the phone ring and saw the out-of-state number. She and Melissa Donahue, Dylan’s mother, began immediately yelling for Donahue to get upstairs.

The phone hasn’t stopping buzzing since.

“All day long,” Donahue added of it blowing up.

Like the rest of his family, he will have to change NFL allegiances.

“Growing up my favorite team was the Broncos, not the Jets,” Donahue said with a laugh.

Some family members went out and tried to purchase some Jets gear as soon as the call came in but found nothing in Billings.

His sister Devon, younger by 17 months, had other hopes.

“I was hoping San Francisco,” she said.

Devon Donahue is moving to San Francisco next week.

Dylan Donahue began his collegiate career at Montana Western but left after one season. After working with his father for a while, he started over again at Palomar College, a two-year school in San Marcos, California. Donahue was the Southern Conference Defensive Player of the Year his sophomore season.

He finished at West Georgia, located in Carrollton, Georgia.

“I had a great time there. A great atmosphere for college football,” Donahue said.

“His path was longer than most,” added Melissa Donahue, proudly watching her son interact with the steady stream of visitors. “He truly appreciates this opportunity.”

Like his father and grandfather Bill Donahue before him, Dylan Donahue has worn No. 49 during his football career. 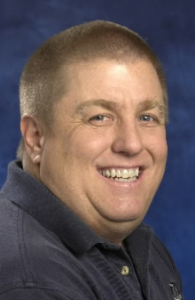 Dylan Donahue was sitting at his aunt's house in Melstone over Christmas break when his phone rang.

Somewhere in the house, or maybe they are in storage, Melissa Donahue isn’t sure, are a collection of small baseball bats.

Dylan Donahue, who graduated from Billings West in 2011, was invited to participate in the NFL Scouting Combine, which will be held Feb. 28-Ma…

Dylan Donahue shares a moment with family and friends at the family's home in Billings on Saturday. Donahue, a graduate of Billings West, was drafted in the fifth round by the New York Jets. An All-American defensive end at West Georgia, he is projected to be an outside linebacker in the NFL. 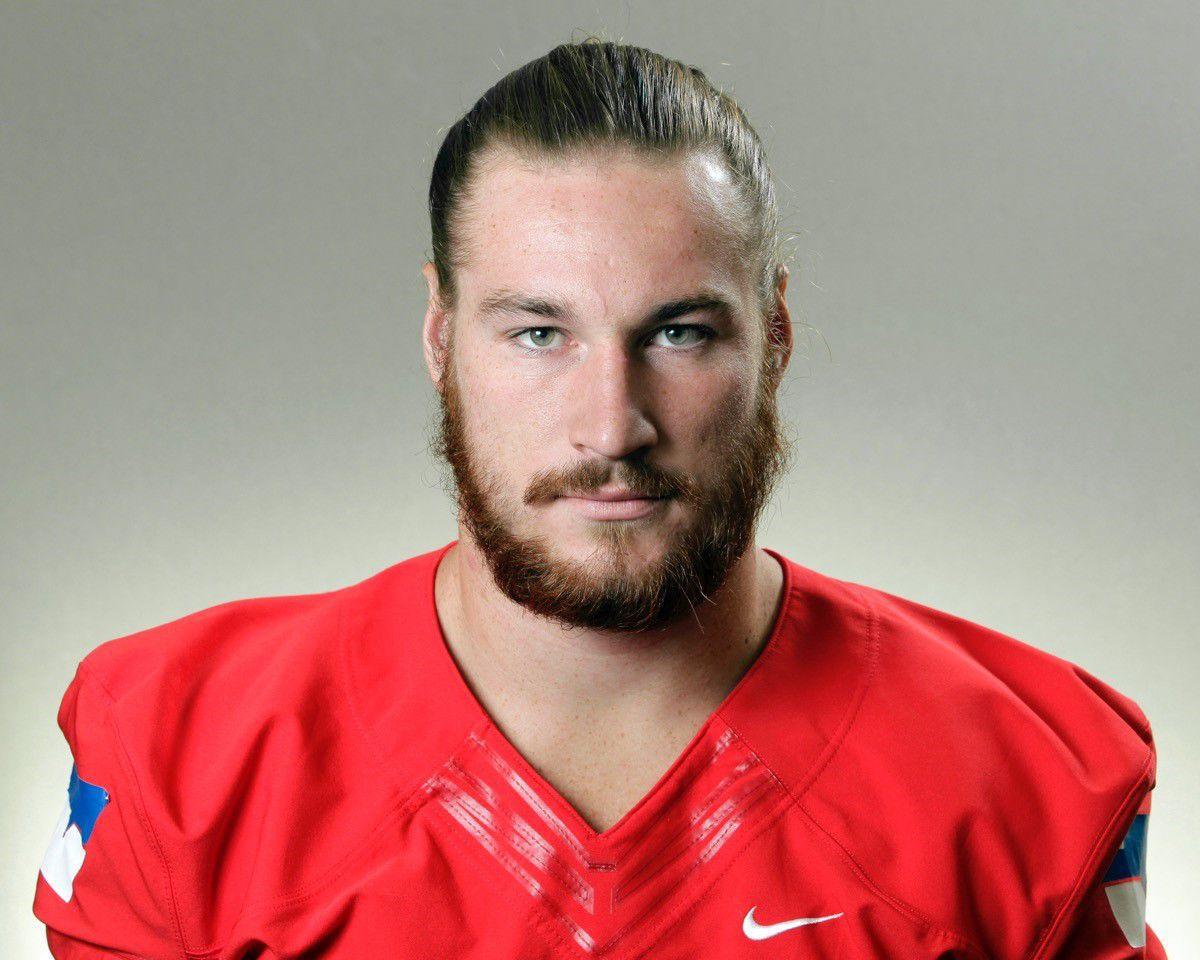