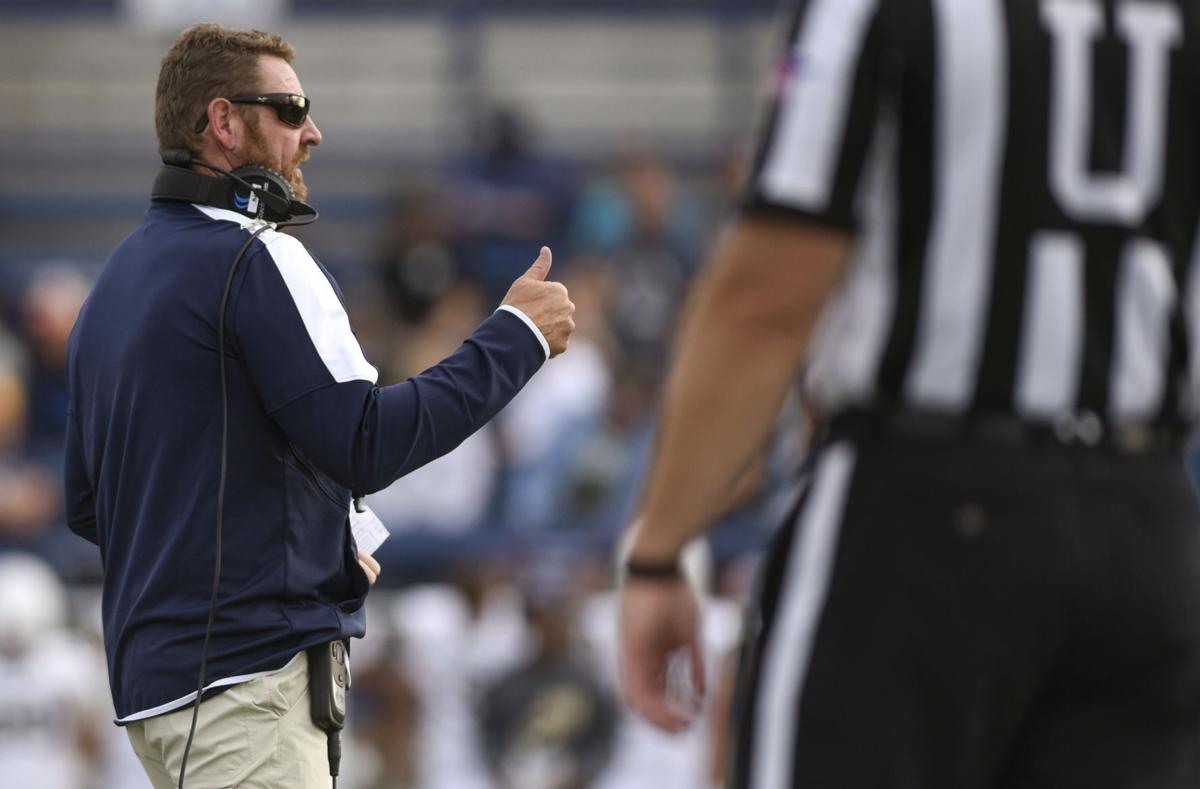 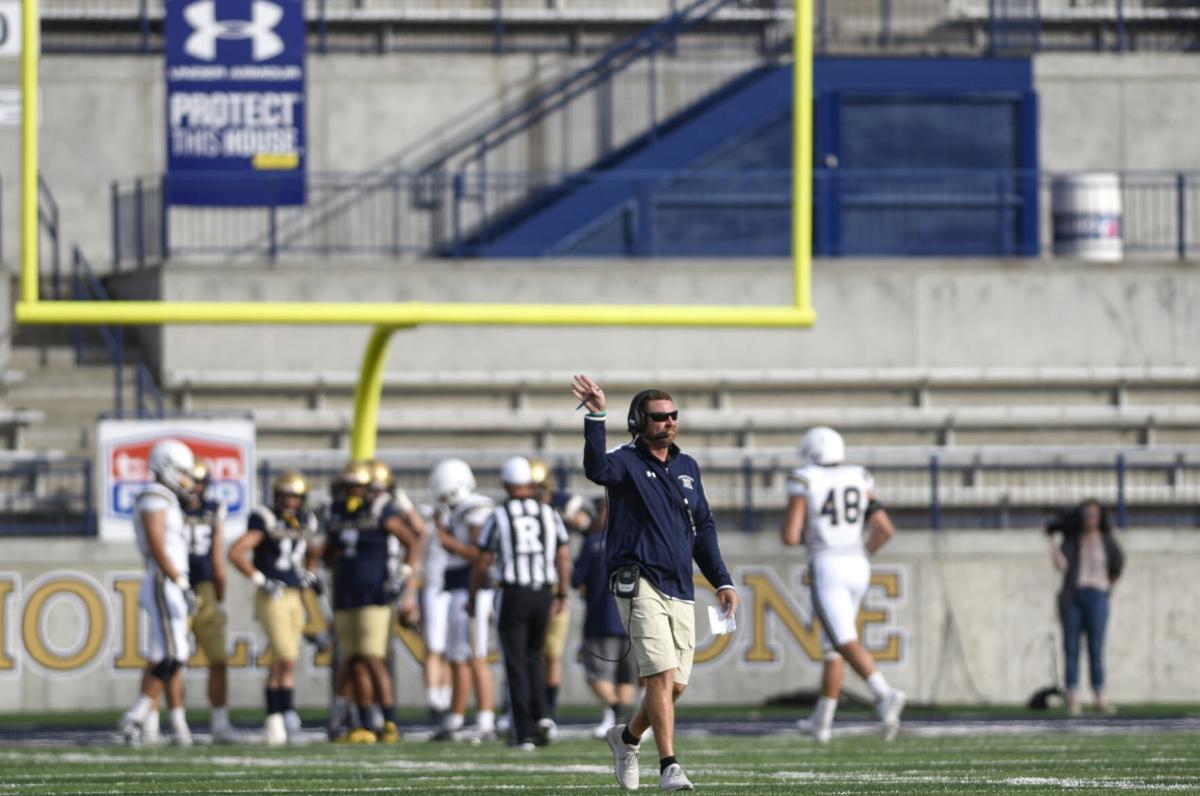 BOZEMAN — The past few years, Jeff Choate would at times tread to press conferences with a palpable sense of intensity.

The Montana State head coach arrived to talk about what happened the week before and what his team was preparing for with its upcoming opponent. Choate has always been on a mission.

His career path alone makes this evident. He made sacrifices to jump around to FBS schools and bolster his resume. Becoming Montana State’s head coach was an accomplishment years in the making.

His ambition is clear, week to week and day to day. He wants to build a program. To improve those around him. To ensure MSU is better than when he arrived.

He would’ve already accomplished that, even if he had been chosen to become Boise State’s next head coach last week — and it was very close to happening. It was an obvious next step for him.

This is a coach who became the “Griz Slayer” by defeating “the team over the hill” as he has called it four years in a row, something the Bobcats haven’t done since the 1970s. Just two years after enduring a losing record, he led MSU to the FCS semifinals in 2019 for the first time in 35 years.

So Bobcat fans, with all this success, should know Choate has interest from the FBS. As long as MSU is winning, these types of possibilities aren’t going away for its head coach.

The Athletic’s Bruce Feldman, who Choate has said he has a positive relationship with, has reported Choate was a potential candidate for other vacancies like at Utah State. Who could blame Choate for wanting to move up in his profession? Wanting to coach in the FBS is the sign of someone who wants to succeed here in order to prove himself.

This is someone who has brought a sign to his office at each of his coaching stops that reads, “How satisfied are you? Restlessness is discontent and discontent is the first necessity of progress. Show me a thoroughly satisfied man, and I will show you a failure.” Choate can recite it by heart.

This is someone who has a blatant desire to win. In 2018, he coached with severe pain in his midsection. A day later, he found out he needed an immediate appendectomy. Three days after that, Choate was back to work and coached his team again the following weekend.

This is someone who, back in 2002, was fired when he was a position coach at Utah State and came incredibly close to taking a high school coaching position in Boise. Just a week ago, I’ll remind you, he had a shot to be Boise State’s head coach.

How other people talked about Choate has always intrigued me. Pete Kwiatkowski, Washington’s defensive coordinator who held the same position at Boise State and Montana State, told me in 2019 he never had a doubt Choate could lead a team of his own.

Former Boise State and Washington head coach Chris Petersen, who appeared to have played an instrumental role in Boise State’s hiring process, told the Chronicle in 2019 he noted Choate related well to his players. Petersen called Choate one of the best coaches he’s worked with.

Choate’s constant energy — “He’s one speed, which is a million miles an hour,” Petersen said — connected him to his teams. Bonds he so easily forms with players, Petersen added, is “super, super powerful.”

Former MSU defensive lineman Derek Marks was one of those players.

“He teaches us to be men. He loves us. He cares for us,” Marks said of Choate. “The detail he puts into coaching and preparing us, he just has a passion for the game that comes out. He just gets us going. I love that he comes in and creates urgency for the program, whatever it needs to be.

“It’s not something on the outside looking in you can see, but you can just feel, ‘Man, this guy really cares about me and this guy values me.’ He’ll sit down and talk with you about anything, and I think a lot of good coaches do that. Like I said, he’s just the best leader I’ve ever been around.”

Times I heard things like that will be what I’ll recall about Choate years from now. But I know most fans will better remember other stories. At least four other stories, to be exact.

They’ll recollect how the Bobcats found a way to beat the Grizzlies every time Choate’s been the head coach of the team so far. How ’Cats fans of all ages have had bragging rights since 2016. How the Bobcats triumphed over seemingly overwhelming obstacles to win those games.

The Miracle in Missoula — MSU’s 22-point comeback and goal-line stand in the final seconds in 2018 — is the greatest game I’ve covered. I still get a little adrenaline every time I think of looking down on Washington-Grizzly Stadium’s field, the players lining up with a few pivotal moments left on the clock and Montana appearing to score.

But, of course, that play never happened. Choate called timeout. You know what happened from there.

And Grizzlies head coach Bobby Hauck’s head may still be spinning after MSU’s victory over UM in 2019. Hauck admitted he didn’t prepare his players properly for the game, which of course Bobcat fans love to reiterate. The Bobcats ran the ball 62 times for 382 yards and six touchdowns — Choate loves the ground game — on their way to putting up 48 points against Montana, the most ever for MSU in the rivalry series.

With an $18 million athletic complex coming in, the program is on an upward trajectory. That is because of the success of the Griz Slayer.

All of Choate’s accomplishments have crept him closer to another potential job. But for now, he’s not going anywhere, and neither is his desire to win.

Jeff Welsch: As much as we want to Brawl now, sensible Cat-Griz verdict helps restore normalcy

Montana and Montana State are opting out of Big Sky football this spring, and that actually begins to restore the normalcy we crave.