BOZEMAN — With its first win out of the way, Montana State is looking to add another.

The No. 13-ranked Bobcats, following a decisive 38-point victory over Drake during their Gold Rush game, will host San Diego at 1 p.m. Saturday at Bobcat Stadium. This will end the nonconference slate for MSU (1-1).

“We’ve just got to go out and play our best game,” MSU coach Brent Vigen said Monday, “and hopefully walk off the field and be excited for our performance.”

San Diego is 0-2 to start the year following losses to Big Sky programs Cal Poly and UC Davis by scores of 28-17 and 53-7, respectively. The Toreros also played Drake last spring and won 13-10.

Vigen said MSU should consider how San Diego measured up against familiar opponents, but he added that can only go so far. Teams often play differently each week depending on scheme and approach.

Vigen pointed out the Toreros have a standout running back tandem. Emilio Martinez leads the team with 122 yards on 33 carries while Terrence Smith has 120 yards on 27 attempts. Martinez totaled a team-high 461 rushing yards in the spring.

Mason Randall gives San Diego balance at quarterback, Vigen added. Randall completed 63% of his passes for 1,561 yards, 10 touchdowns and 11 interceptions. In two games this fall, he’s thrown for 372 yards, one TD and three picks with a 58.8% completion rate.

“Any time a team can throw out different styles of running backs at you that are pretty even, that’s challenging,” Vigen said. “We see a team that’s pretty formidable.”

Vigen said San Diego brings a defense loaded with experience, so being fundamentally sound on offense will be key. With that, Vigen hopes MSU’s running game improves.

So far, the Bobcats have rushed for 270 yards and have passed for 486. Vigen is seeking a better balance moving forward.

Vigen said MSU’s production so far is partially a result of how the Bobcats have been defended. He gave credit to Drake for being committed to slowing down the likes of Isaiah Ifanse, who was limited to 60 yards last week. Vigen complimented Ifanse for breaking tackles even on three-yard gains.

MSU’s head coach said the offensive line, with two redshirt freshmen, is jelling, which was evident in the second half last weekend. Vigen was encouraged by how the Bobcats ran to end the game with 57 yards in the fourth quarter.

“Our guys have to have confidence in the run game,” Vigen said. “They understand throughout a game in a lot of respects it’s about wearing people out. And if we can get leads and we’re able to do that in the fourth quarter, that’s where we want that running game to take hold.”

Against Drake, MSU starting fullback RJ Fitzgerald landed on his arm awkwardly and was slow to get back up. Vigen called it an upper-body injury. As he left the field with assistance, Fitzgerald raised his helmet with his right hand, prompting cheers from fans.

Fitzgerald’s blocking, especially in the run game, has been a significant contribution for the Bobcats in recent years. Vigen said the team will find out more about the severity of the injury for the 5-foot-10, 226-pound junior from Dillon in the next few days.

“He’s going to be out for at least a little while here,” Vigen said, “probably at least a few weeks.”

MSU running back Lane Sumner also didn’t play against Drake. Vigen said MSU expected for him to recover quickly from his injury, but after some time, it appears to be more significant than initially believed. The Bobcats will monitor his recovery this week.

After Vigen said defensive back Tyrel Thomas had “a good chance” to play against Drake, he also didn’t suit up. Thomas underwent knee surgery mid-August. However, Vigen said he’s made “good progress” and that Thomas did “get out and run with our (physical therapy) crew a little bit and demonstrated that he’s well on his way.”

“Whether that means he’s going to be back this week or not, we’ll just have to see,” Vigen said. “But he’ll be back soon enough.”

True freshman Simeon Woodard took the field against Drake, his debut for the Bobcats. The 5-10, 170-pound cornerback from San Antonio tallied two tackles, assisting on a tackle for loss.

Vigen said the Bobcats don’t plan on redshirting Woodard, which is an option if he plays four games or fewer. Vigen added wide receiver Andrew Patterson, who traveled to Wyoming last week, is another true freshman MSU’s coaches are considering playing throughout the year.

“He really excelled,” Vigen said of Woodard. “We felt confident with his performance in fall camp to be a relatively key contributor whether it was as a cornerback or on special teams, and he responded really well on Saturday. So I’m looking for him to continue getting those opportunities on the field and play throughout the season.” 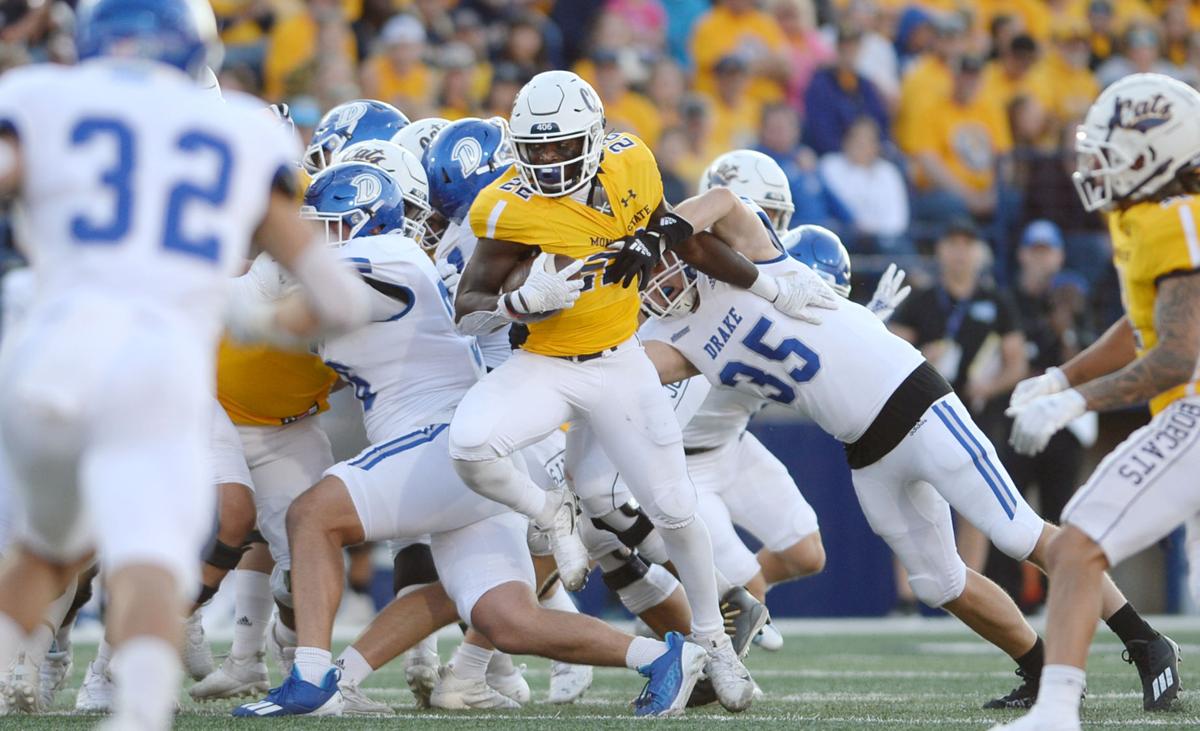 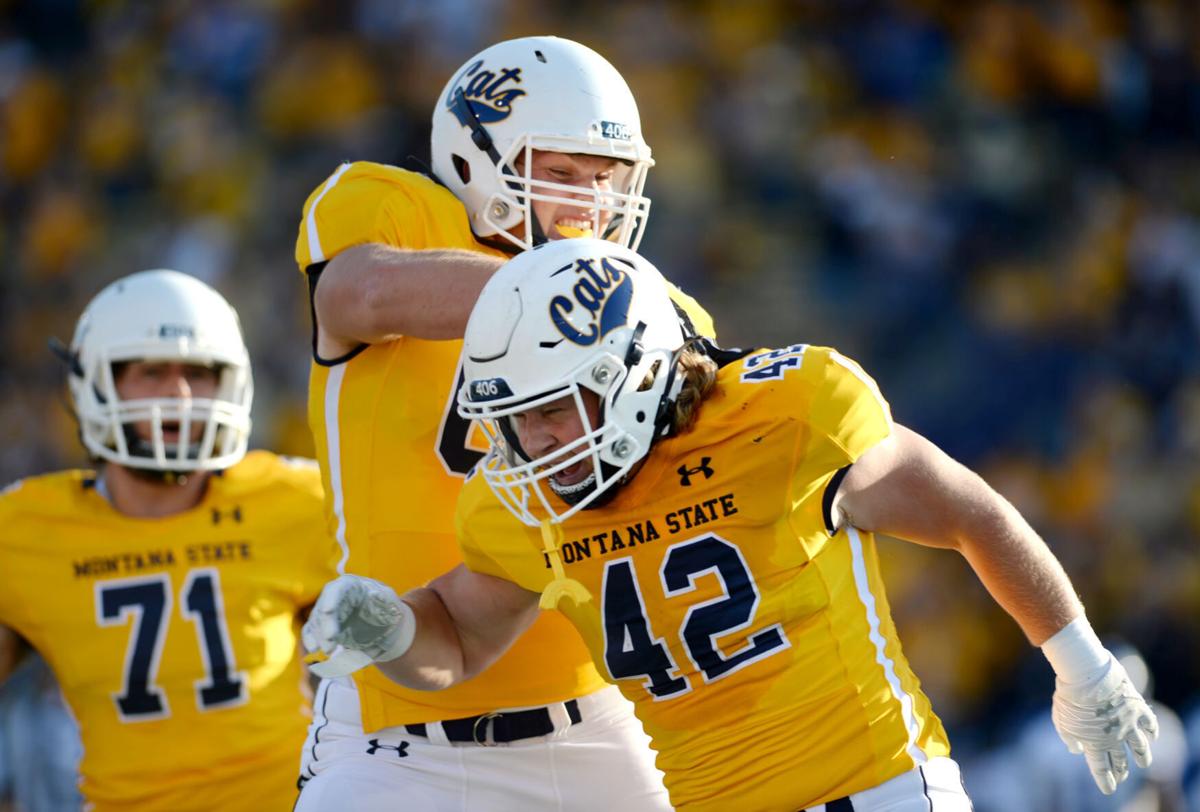 Montana's Rush Reimer congratulates R.J. Fitzgerald after a play against Drake on Saturday at Bobcat Stadium. 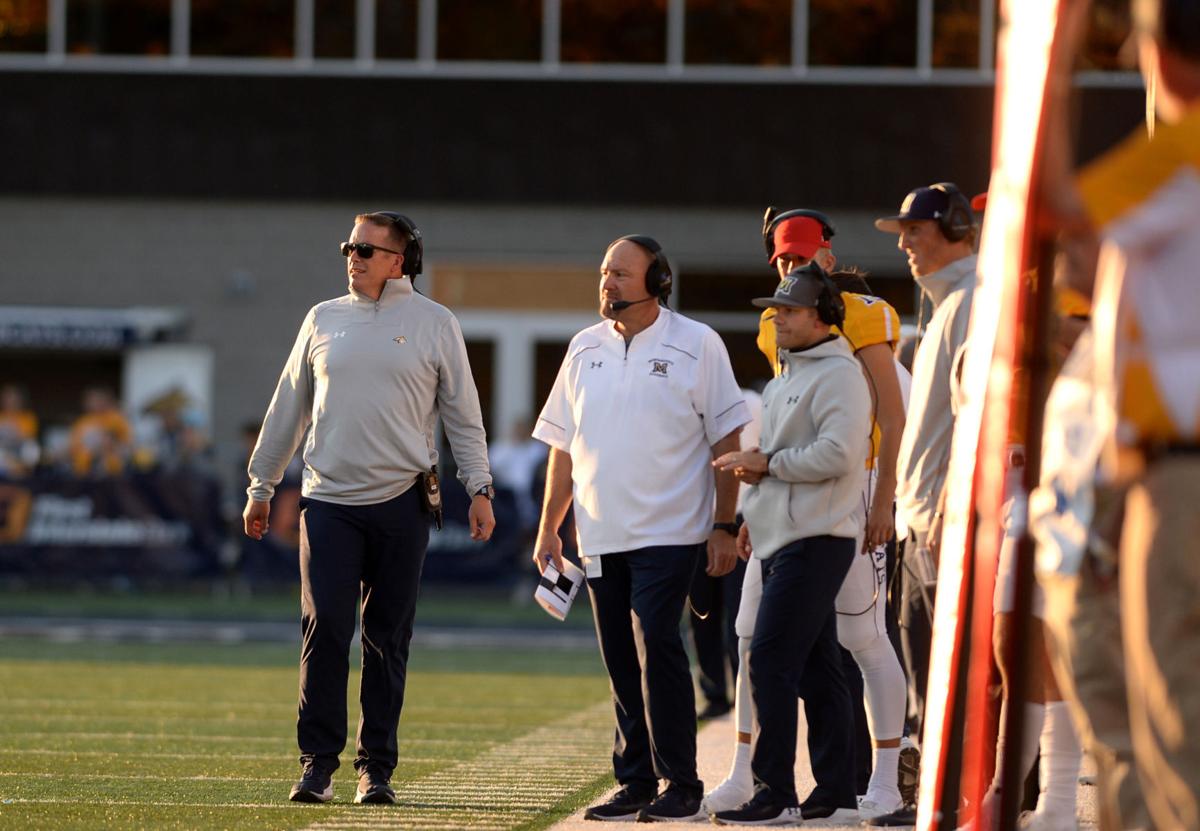