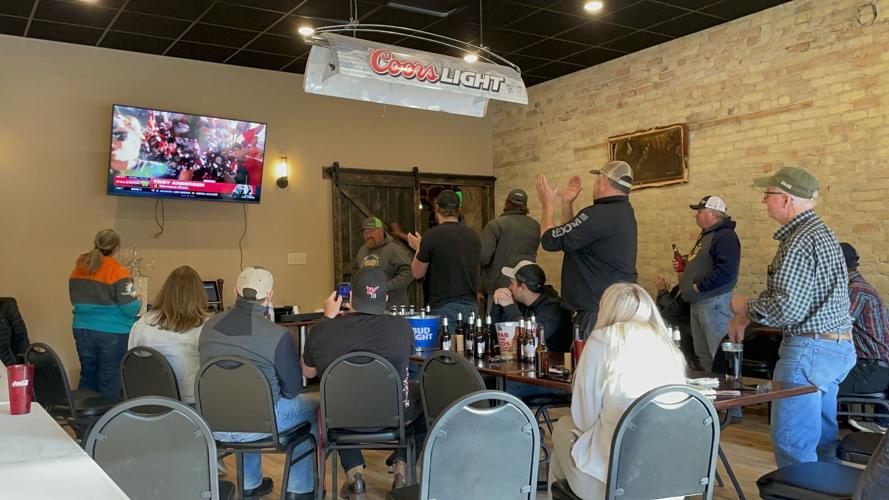 Patrons at Mac's Last Cast in Dillon celebrate after it was announced Troy Andersen was drafted by the Atlanta Falcons. 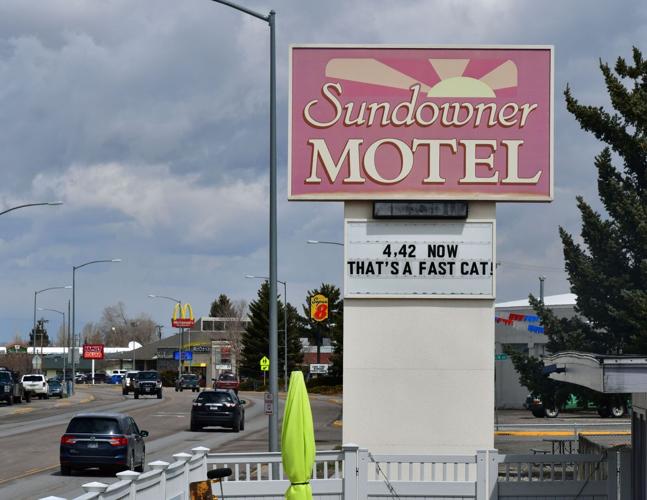 DILLON — The front room at Mac's Last Cast in Dillon was sparsely populated when the Tampa Bay Buccaneers went on the clock to begin Round 2 of the NFL Draft on Friday.

Two men and a woman sat, relaxed on each side of a long, dark brown table that pointed to a flat screen TV hanging on the wall. Across from the screen was a wall-to-wall window that looked out to South Montana Street, a main drag in the town with fewer than 5,000 people living in its city limits.

A man wearing a trucker hat and a dense goatee turned to his buddy: "That's actually a good pick."

But not the pick anyone was here for.

The wait for Troy Andersen — the former Montana State star linebacker whose days as a Dillon resident are numbered — was on.

Patrons wondered aloud where Andersen might be. Probably at home, they decided.

"Can you imagine the nerves?" Danny Mehring said as his pizza arrived to the table. "Projected to go in the second or third round, sitting there, waiting for a phone call?"

"Even in middle school, I was a senior in high school and still looking up to him," Mehring said, tilting his eyes toward the ceiling.

About an hour earlier, just a few blocks away at Vigilante Stadium, pole vaulters were clearing an elastic band, hurdlers were exploding out of the blocks and javelin throwers were warming up their arms by throwing a football.

The Dillon High School track and field team, as is the case with most every track and field team, is chock full of football players, many of whom witnessed Andersen's athletic displays on the very field they practice on each spring and fall. Andersen was a Beaver just five years ago, but his career is already talked about with the sanctity of legend in Dillon.

“You’d come to a game and the whole stadium was packed, it was just a whole different level of high school football,” Beavers junior cornerback and wideout Treyton Graham said.

“I think he played JV basketball and was dunking and stuff,” said senior cornerback and receiver Eli Nourse. “So everyone started talking about him. And then his junior year was really when everyone realized that he was the guy.”

Andersen led the Beavers to the Class A title game in 2015 and 2016, capping his career with a 34-17 win over Columbia Falls as a senior and becoming a role model to Dillon athletes who would try to fill his shoes when they reached high school.

“He’s a hometown hero,” said junior safety and wide receiver Caden Hansen. “So you’re just going to look up to him. That’s what you want to push yourself to be."

Though not the first Dillon-native to be drafted, Andersen has heartened a community passionate about its sports.

“It’s definitely a crazy thought to think that someone from Dillon can do that because it’s such a small town and there’s thousands and thousands of athletes out there,” said sophomore quarterback Kee Christiansen.

For Christiansen, Graham, Hansen and Nourse, their connection to Andersen goes beyond their shared hometown.

“Not everyone can say ‘I played on the same field as an NFL star,’” Graham said. “A kid that went to the NFL and grew up in the same town as you, got coached by the same coaches. It’s just something special to think about.”

Back at Mac's, 10 picks into the second round, the room was treated to its first "Waterboy" impression. It should be noted, however, that high-quality H2O was nowhere in sight.

An optimistic cry of "here we go!" could be heard when Michigan linebacker David Ojabo was drafted at pick 45 by the Baltimore Ravens. Surely Andersen would soon follow.

The Arizona Cardinals played a cruel prank on the people of Dillon when they selected with the 55th pick, from Colorado State, Trey McBride.

The room in Mac's rode the announcement like a roller coaster. Gasps when "Tr" got their hopes up, followed by groans when "ey" let them down, and finally laughs as they realized how their hearts were playing tricks on their ears.

But then, at 7 p.m. Mountain Time, the bar in the next room over began to stir. Could it be? Was their TV feed a few seconds ahead of this one? Did they know something in there that we couldn't know in here?

On the TV, former Tampa Bay and Atlanta running back Warrick Dunn walked to the podium in Las Vegas.

Dunn announced, "With the 58th pick of the 2022 NFL draft the Atlanta Falcons select Troy Andersen."

The younger men in the room hooted and hollered, one pounded on a wooden door. A few of the older men clapped. A woman in a Miami Dolphins jacket stood up and smiled as she looked around the room.

"That's a lot of Dillon stuff!"

Alan Hale, a Dillon resident beginning in 1966, said "my heart just filled my chest" when ESPN ran that video package.

"The show they shared about him, I don't care where he went," Hale said. "They put Dillon, Montana, on the map."

Of the 73 picks made Friday night, only one mattered in Mac's. Andersen's selection validated the town's love for athletics.

Hale added, "Because there's nothing else to do."

So what do the people of Dillon do 15 minutes after their hometown hero is drafted?

They watch it again.

The server scrubbed back to Dunn's appearance on stage. And again the overjoyed Dillon fans stood up and cheered upon hearing Andersen's name.

Dante Frattini is the sports editor for the Montana Standard and a writer 406MTSports.com. Email him at dante.frattini@406mtsports.com and follow him on Twitter @DanteMTS406.

"Certainly his measurables are off the charts, but you don’t take guys just on measurables. The guy can play.” Falcons head coach Arthur Smith on Troy Andersen

Andersen is the first second-round draft pick in MSU history.

The offensive tackle has four years of eligibility left.

"The pressure and anticipation were all building up. And then finally, I got a call from a number in California, and it was the one we've been waiting on this whole weekend." Daniel Hardy

Brown was one of three Bobcats to announce portal entries on Tuesday.

“His ability to see things and diagnose things and play fast has showed up again." MSU coach Brent Vigen

“It sounded like a good idea, and I knew the story. There'd been articles written from time to time, but no one had ever put out a book on it." Paul Wylie

Patrons at Mac's Last Cast in Dillon celebrate after it was announced Troy Andersen was drafted by the Atlanta Falcons.