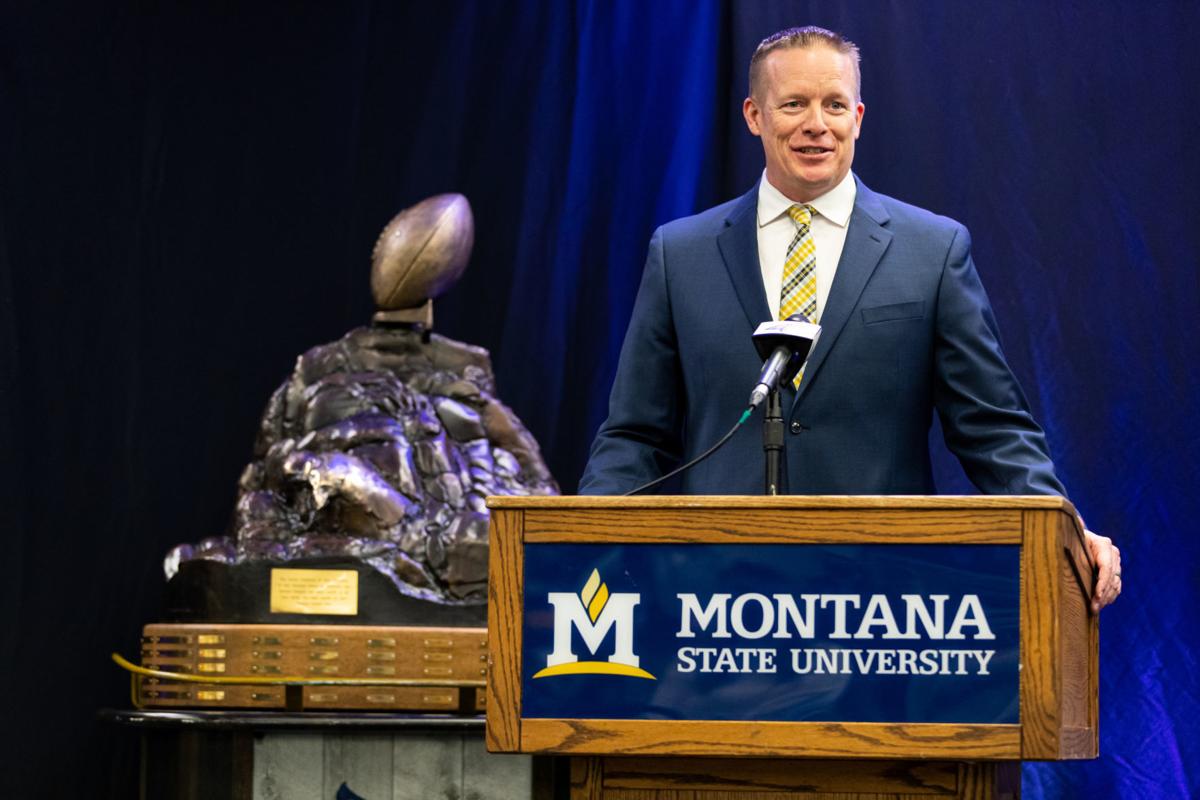 Montana State head coach Brent Vigen speaks with the Great Divide Trophy behind him during an introductory press conference on Tuesday at Brick Breeden Fieldhouse. 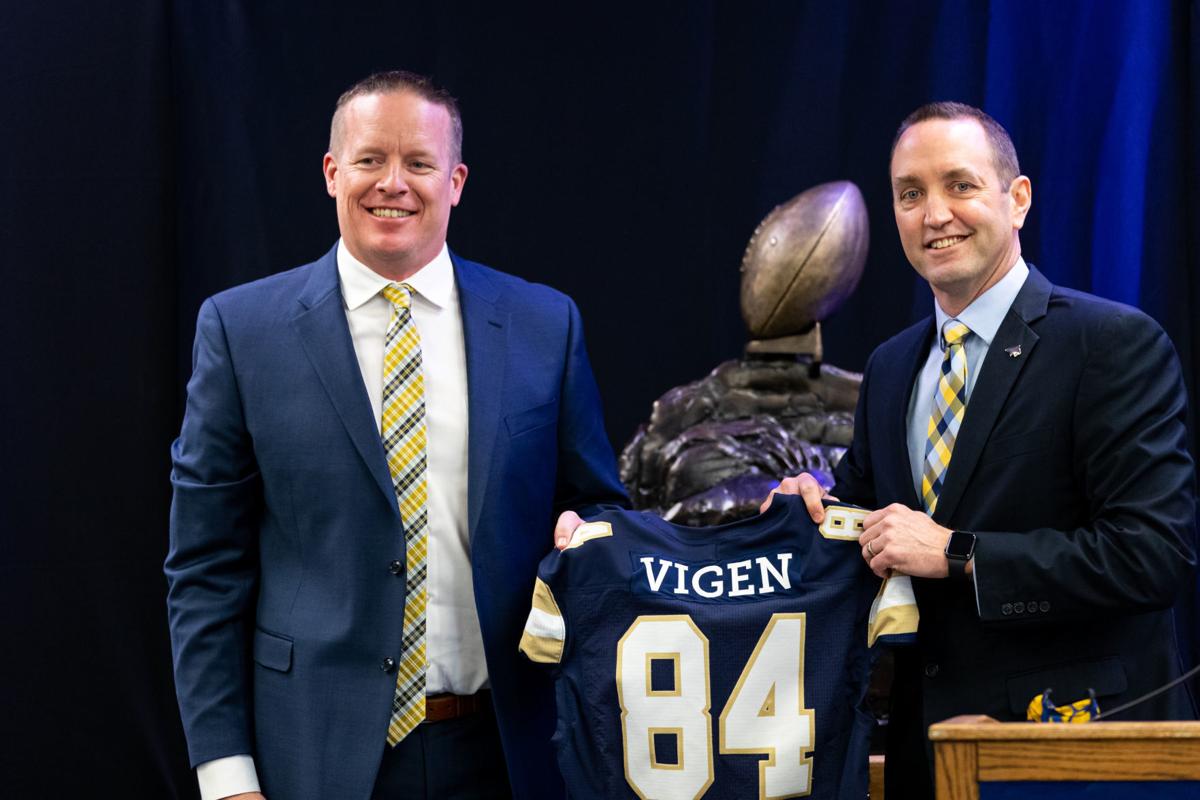 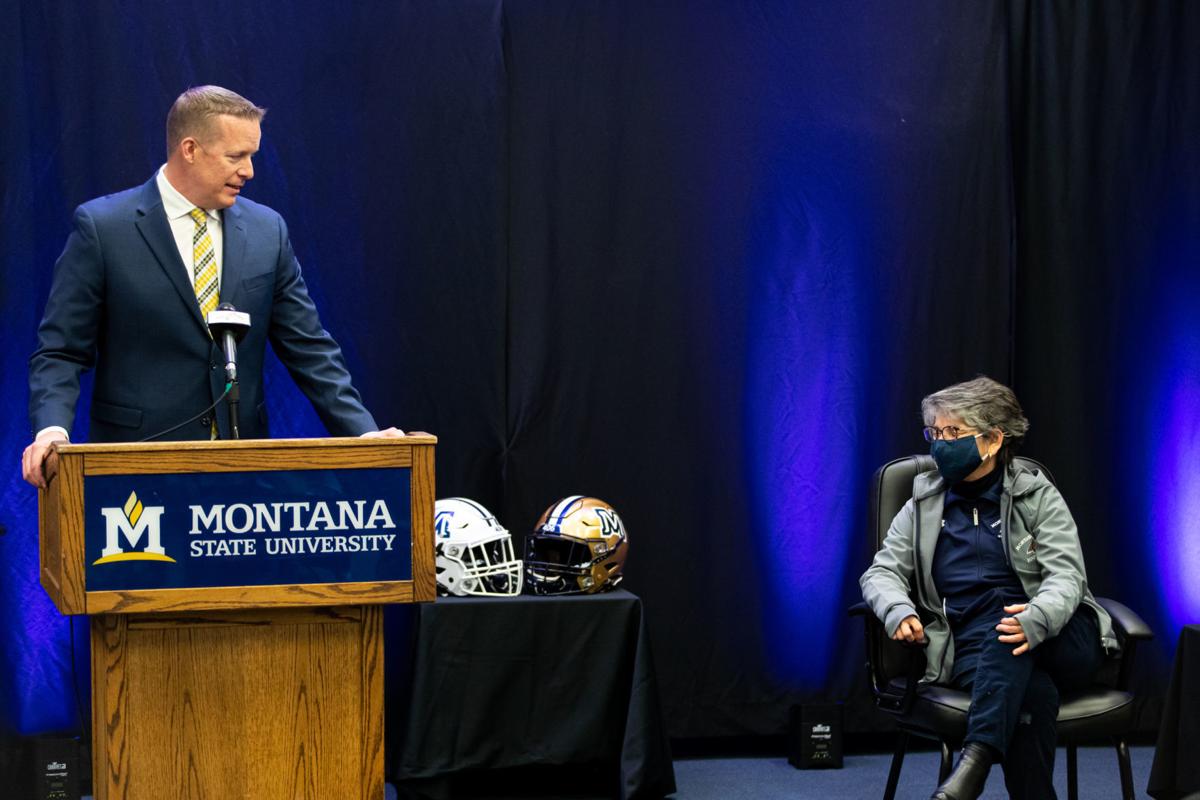 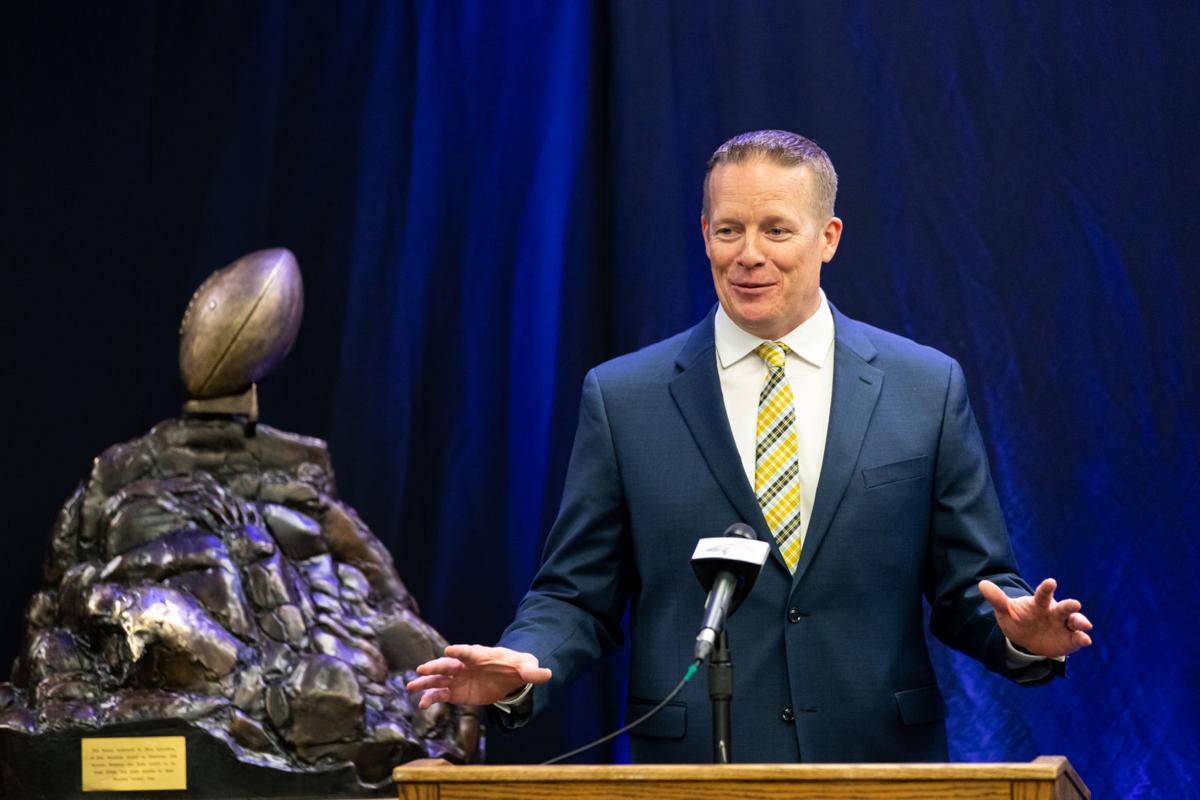 BOZEMAN — As he was formally introduced as Montana State’s next head coach and laid out his vision for the program, Brent Vigen admitted he had thought about a day like this for years.

He recalled saying to his wife, Molly, that if MSU’s head coaching job ever opened up, it would be a good fit. He and his family had been searching for the right place at the right time for Vigen to become a head coach.

“Becoming a head coach is something I’ve always dreamed about,” Vigen said. “It’s been a goal of mine.”

Vigen was met with applause during a press conference at the Brick Breeden Fieldhouse in Bozeman on Tuesday. MSU President Waded Cruzado and athletic director Leon Costello expressed their elation that Vigen would now lead the football program.

Costello emphasized the importance of finding a coach who understood the Bobcats are “positioned and poised to win now.” Cruzado said she believes Vigen can further elevate the program.

“Football in the state of Montana is very important,” she said. “Bobcat football is a big deal, and we're very happy to see that trajectory continue in the hands of an extraordinary leader.”

Vigen thanked Cruzado and Costello for expressing support for the program, which he believed made the job attractive. He thanked others at MSU for speaking to him during the hiring process and ultimately believing in him.

Vigen was grateful for a lot of people in his life. He asked his wife and children to stand with him near the podium so he could talk about how instrumental they have been.

He also recognized his father, a hall of famer who coached Vigen in high school while he grew up in Buxton, North Dakota. He saw the relationships his father made and realized he could pursue a similar career that he would enjoy.

His father is still one of the first people he calls to ask coaching questions.

“That was impactful for so many reasons,” Vigen said of his youth. “I know my love for sports comes from that. But also your love for your life’s work.”

He also thanked Gus Bradley, another mentor. Vigen and Bradley, a current Las Vegas Raiders defensive coordinator and former Jacksonville Jaguars head coach, were among the few North Dakota State assistants who stayed on staff when Craig Bohl became head coach in 2003. Vigen learned about the work ethic necessary to be a college coach from Bradley.

Before taking the job, Vigen called Bradley, who’s brother is former MSU All-American quarterback Kelly Bradley. Vigen asked if the job would be right for him.

“Vigs,” he remembered Gus Bradley saying, “you would be crazy not to go after it.”

Vigen said he had “a front seat” while learning how to build a successful FCS program. He also figured out how to recruit talent from small towns, which will be a key part to his job in the Treasure State. He also grasped the intricacies of managing the 63 scholarships allowed to teams in the FCS.

The Bison transitioned to Division I in the early 2000s and won three national championships less than a decade later before Bohl and Vigen left.

“Every step of the way, there were decisions to be made, agendas to get pushed, to take us to ultimately that spot we got to,” Vigen said. “I know the road map.”

Vigen said his experiences at Wyoming and NDSU prepared him to be the Bobcats head coach.

Costello noted Vigen’s understanding of the FCS, familiarity recruiting in the western side of the country, his championship-winning resume, focus on academics and experience with player development stood out.

“The goal throughout this process,” Costello said, “was to identify a head coach who can build upon the foundation of success that has been attained in the storied history of MSU.”

Costello added Vigen has formed meaningful relationships with players and coaches throughout his career.

This is something Vigen has already prioritized at MSU. He plans on talking to each individual player throughout the week and already held a virtual meeting with the 2021 signees. He said the players’ commitment to the program was evident.

“There’s no reason we can’t go out there and be in a position to win every single time we take the field,” Vigen said.

Vigen told MSU’s search committee during his hiring process his top goals were defeating rival Montana, securing a Big Sky Conference championship and then winning a national title. Cruzado and Costello both expressed a high level of confidence that Vigen can help the Bobcats accomplish those missions.

“We know you and we know your history,” Cruzado said to Vigen. “You know what championships are made of and you know how to make champions.”

Tori Martell has made 195 3-pointers at Montana State. Her and teammate Sidney Zieske, who's considered a sophomore on MSU's roster, will graduate from Montana State this spring having enjoyed some of the greatest moments in program history.

SACRAMENTO, Calif. – For three and a half quarters, it was a struggle as Montana State shook off the rust from an 11-day hiatus. In the end, a 12-0 run midway through the final frame lifted the Bobcats to a 61-57 Big Sky Conference win over Sacramento State on Wednesday night in The Nest.

Montana State qualified a full contingent of 12 athletes for the national championships.

Montana State has its eyes on one of the five coveted byes in next week’s Big Sky tournament.

Bozeman's Duncan Hamilton has qualified for the NCAA Track and Field Championships for Montana State.

Montana State rallied from an 11-point deficit in the second half but still fell to the winless Idaho Vandals.

Montana State head coach Brent Vigen speaks with the Great Divide Trophy behind him during an introductory press conference on Tuesday at Brick Breeden Fieldhouse.