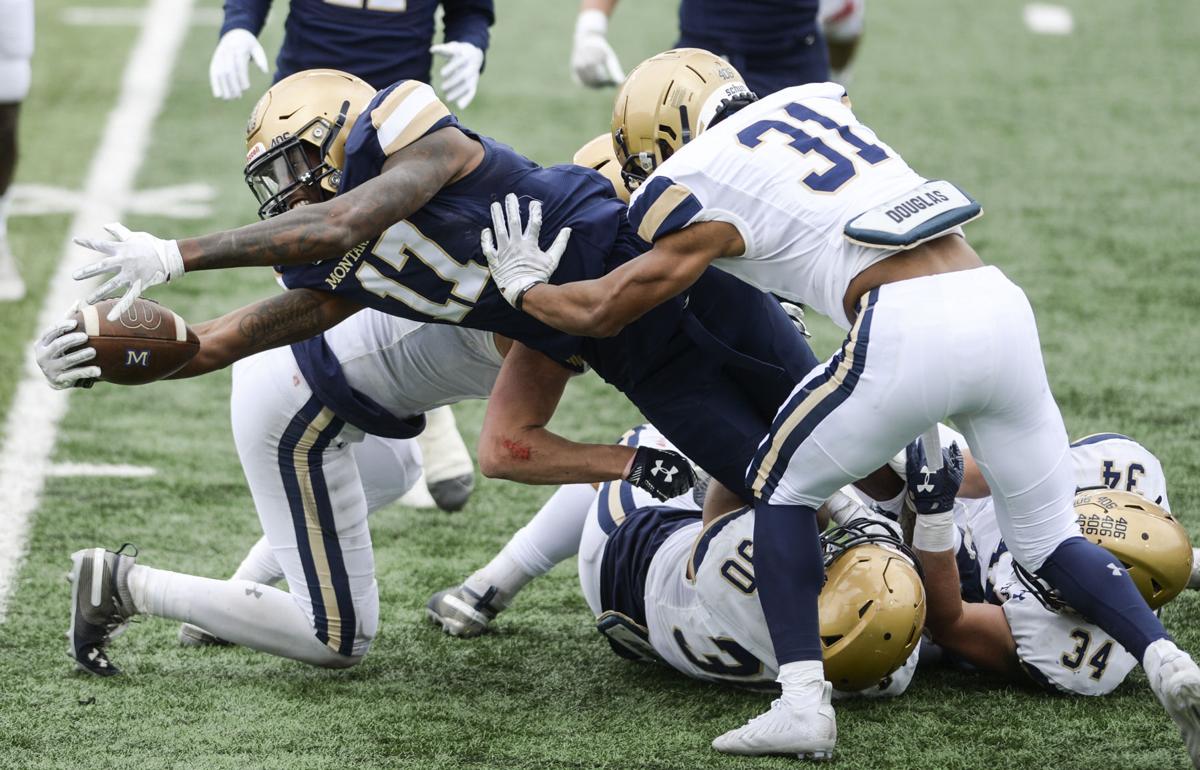 Montana State wide receiver Jaden Smith stretches toward the goal line during the Sonny Holland Classic on Saturday at Bobcat Stadium in Bozeman. 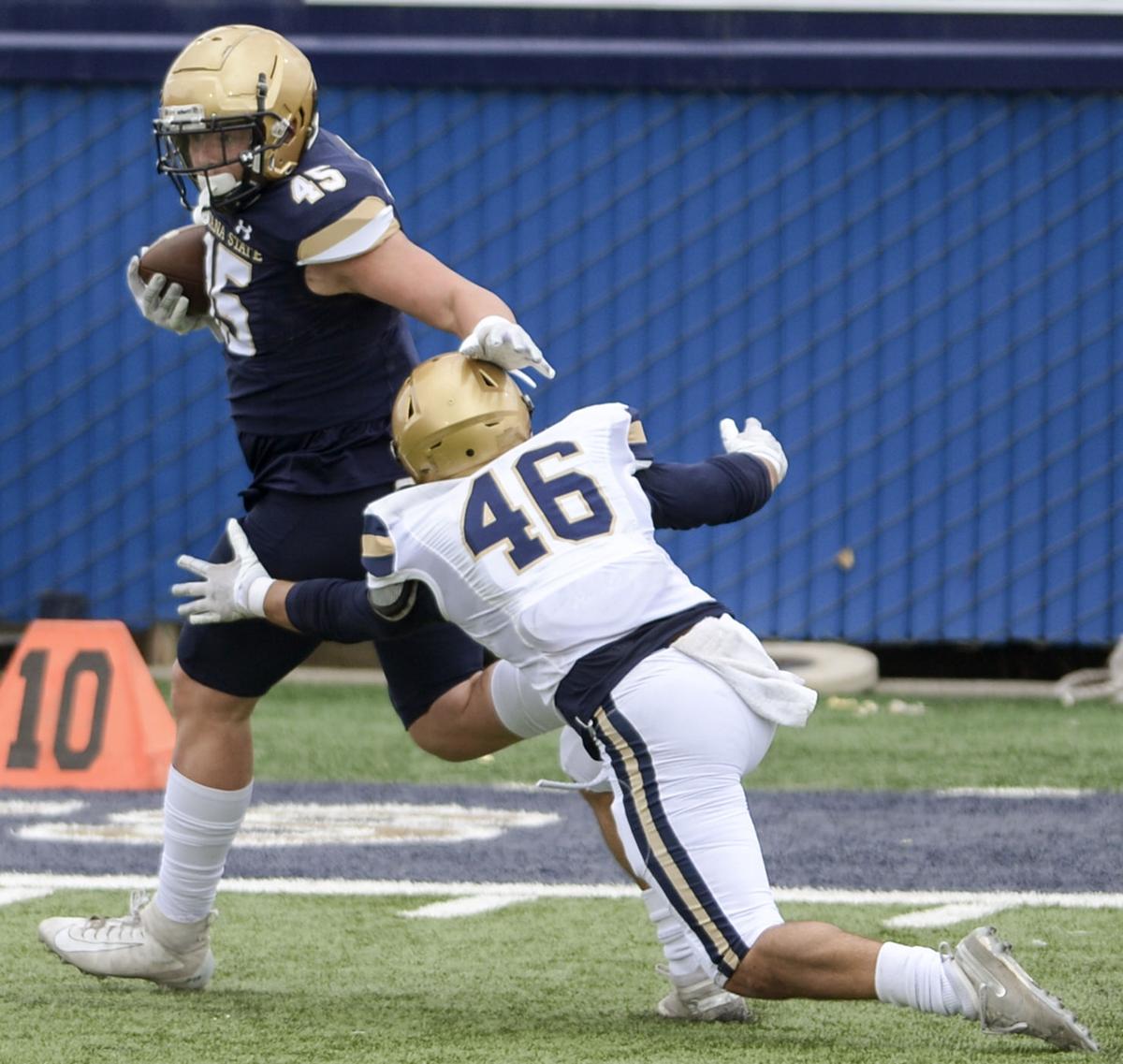 Montana State tight end Derryk Snell escapes a tackle and goes on to score a touchdown during the Sonny Holland Classic on Saturday at Bobcat Stadium. 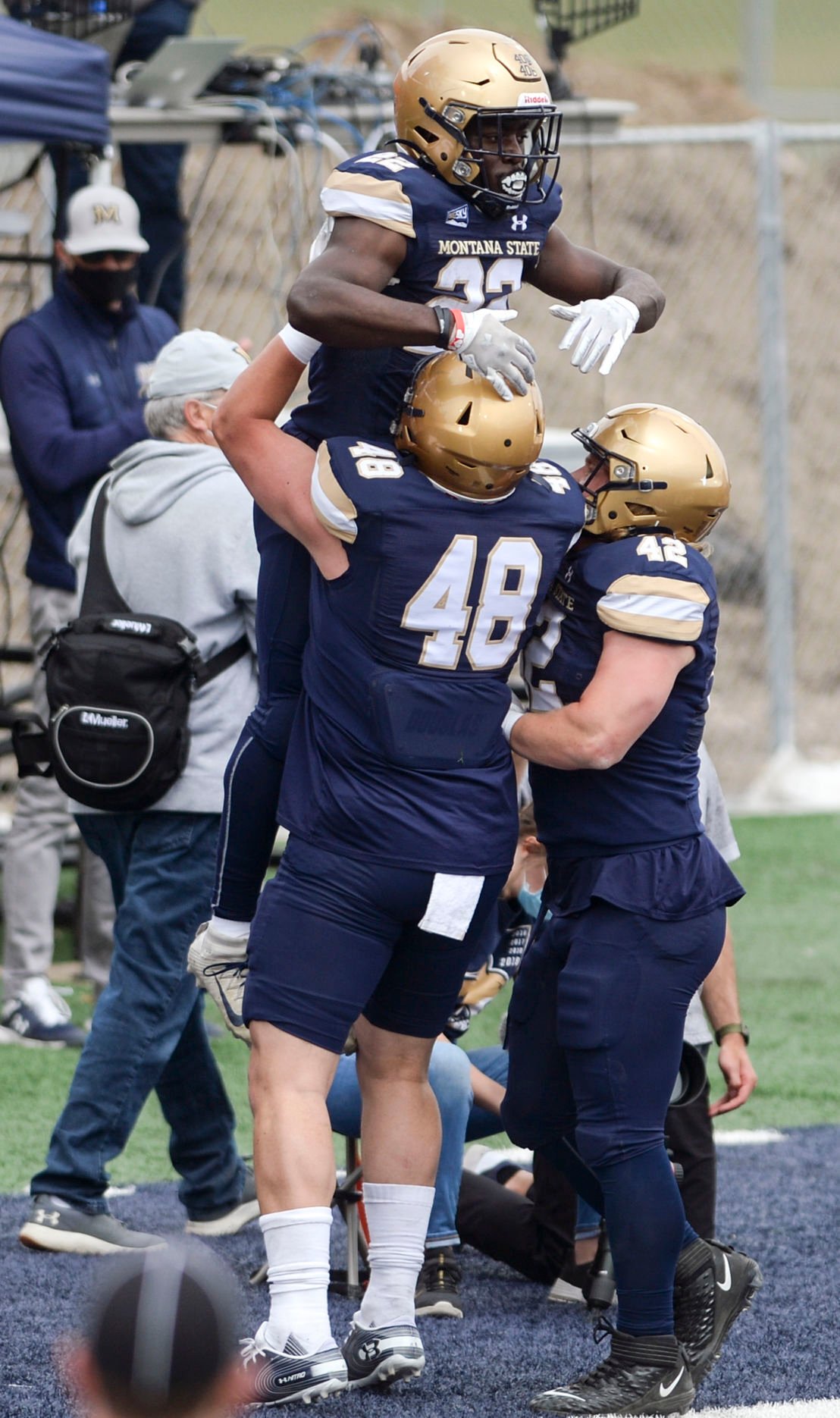 Montana State celebrates a touchdown by running back Isaiah Ifanse during the Sonny Holland Classic on Saturday at Bobcat Stadium. 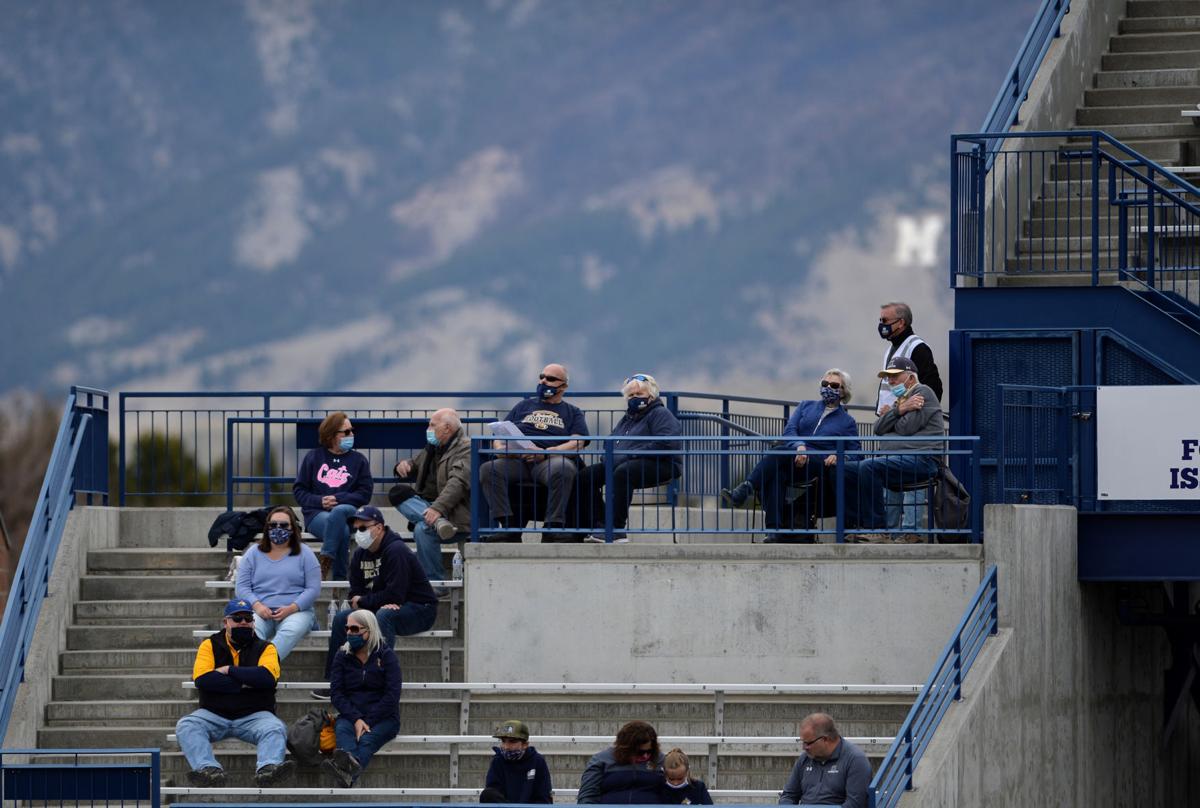 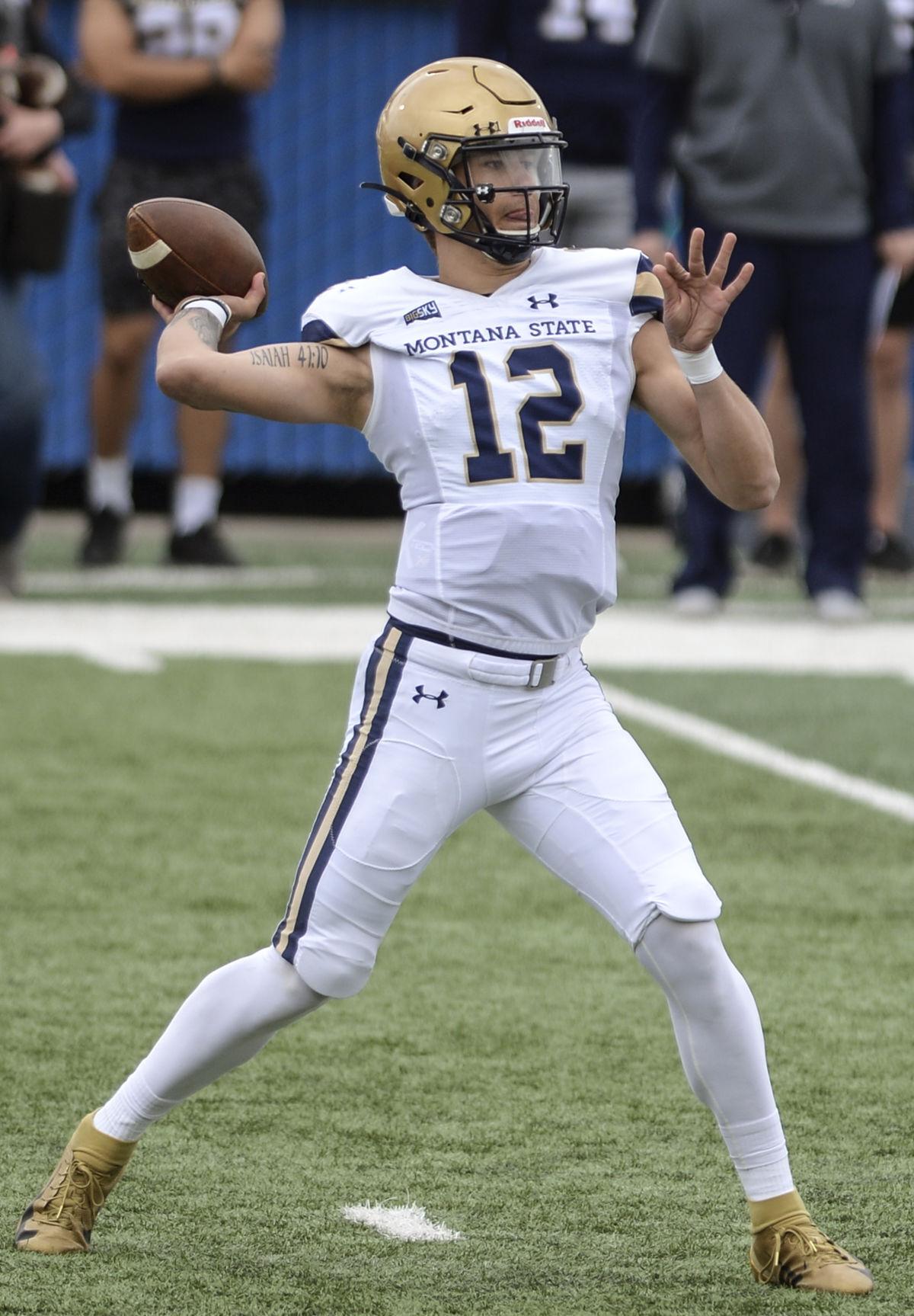 Montana State quarterback Tucker Rovig fires a pass during the Sonny Holland Classic on Saturday at Bobcat Stadium in Bozeman.

BOZEMAN — Jeffrey Manning frantically rose to his feet, the ball in his hands, and began sprinting in celebration.

After one of Montana State’s offensive drives had reached the 7-yard line, the defense recovered a fumble. Manning, an Oregon State transfer, swung his arms as he hastened around the end zone. Teammate Tyrel Thomas greeted him, also waving his arms.

There was plenty to celebrate on Saturday during the Sonny Holland Classic spring scrimmage at Bobcat Stadium. MSU personnel were ecstatic to host limited fans for a football competition for the first time since the coronavirus pandemic began more than a year ago.

“We hoped we could have an event,” Bobcats head coach Brent Vigen said. “A great crowd. You could feel the crowd, and I think that’s what our guys needed.”

This was also the first glimpse into what Vigen will bring to the program since taking over as the Blue team beat the White team 21-10.

MSU was missing plenty of defensive starters, including All-Big Sky performers Chase Benson, Troy Andersen and Amandre Williams. Without them on the field, the Bobcats' offense completed 15 of 31 passes for 236 yards and a touchdown. It rushed 45 times for 256 yards and three TDs.

Vigen noted the team’s passing game was “a little off” and issues with protection were evident. Still, the Bobcats’ offense appeared more balanced than in the past.

“Competitive game,” Vigen said. “We have a good sense of where we’re at."

Each of MSU’s quarterbacks, aside from Casey Bauman who was out due to injury, had a moment to shine.

Matthew McKay displayed downfield accuracy early on, nearly connecting with Lance McCutcheon on a deep shot on his first throw of the contest, an element that was somewhat absent in MSU’s offenses in the past.

McKay, a North Carolina State transfer who took first-team snaps, found receivers on intermediate routes. That included a pass to Ryan Davis on the Blue team’s opening drive that led to an Isaiah Ifanse 4-yard touchdown.

Vigen indicated McKay was leading in the quarterback battle last week, and Saturday didn’t appear to change that. On a drive in the second half, McKay found Lane Sumner on a pass to the flats for a substantial gain. McKay was 3 for 8 for 23 yards.

Vigen admitted calling plays when McKay was in the game was difficult. He was not at full contact, meaning a play was whistled dead as soon as someone touched him. That altered what he could do on the ground, which Vigen has said during spring ball has been a key strength of his.

“Matt’s learning. When you’re a quarterback, every time you learn a new offense it’s almost like a reset,” Vigen said. “I think we’ve got a guy who’s a competitor and wants to be really good and emerge as a leader on our team. I think he’s got a capacity to keep growing, and I think he recognizes that too.

“We’re going to count on him obviously big in the fall.”

MSU’s run game also thrived, as it has in the team’s previous intrasquad scrimmages. Ifanse bounced off multiple tackles on his way to leading the Bobcats, as he has several times in his career, with 14 carries and 111 yards.

MSU coaches have been high on Elijah Elliott, and he displayed his athleticism along the perimeter Saturday. The freshman running back added 75 yards and a touchdown on seven carries.

“We’ve got a good stable of running backs that bring a lot of skills to the table,” Vigen said.

Tucker Rovig threw a 42-yard dart to Nate Stewart, who ended up with 53 yards receiving, along the sideline in the final minutes. Following another quick 7-yard pass to tight end Treyton Pickering, Rovig punched in a QB sneak touchdown on a fourth down.

Rovig completed 5 of 8 passes for 89 yards with an interception.

On the next drive, freshman Blake Thelen tossed a short pass to Jaden Smith, who had three catches for 47 yards, on a crossing route that turned into a 32-yard gain.

On third and short, Thelen capped the possession with a 34-yard touchdown pass. He booted out to the right and located tight end Derryk Snell.

And on the final drive of the day, Tommy Mellott showcased his versatile skill set, scrambling multiple times. He fired a pass to Tyrone Marshall, who finished with three receptions and 52 yards, on a seam route in the final minute. But his pass toward the end zone was disrupted when he was hit and was intercepted.

Despite these miscues, Vigen was hopeful as the Bobcats move into the next phase of the offseason.

“The execution takes some time,” Vigen said. “I think we’re making some good strides. It’s a work in progress, but I think we’ve got some weapons and some quarterbacks who can throw.”

Montana State wide receiver Jaden Smith stretches toward the goal line during the Sonny Holland Classic on Saturday at Bobcat Stadium in Bozeman.

Montana State tight end Derryk Snell escapes a tackle and goes on to score a touchdown during the Sonny Holland Classic on Saturday at Bobcat Stadium.

Montana State celebrates a touchdown by running back Isaiah Ifanse during the Sonny Holland Classic on Saturday at Bobcat Stadium.

Montana State quarterback Tucker Rovig fires a pass during the Sonny Holland Classic on Saturday at Bobcat Stadium in Bozeman.