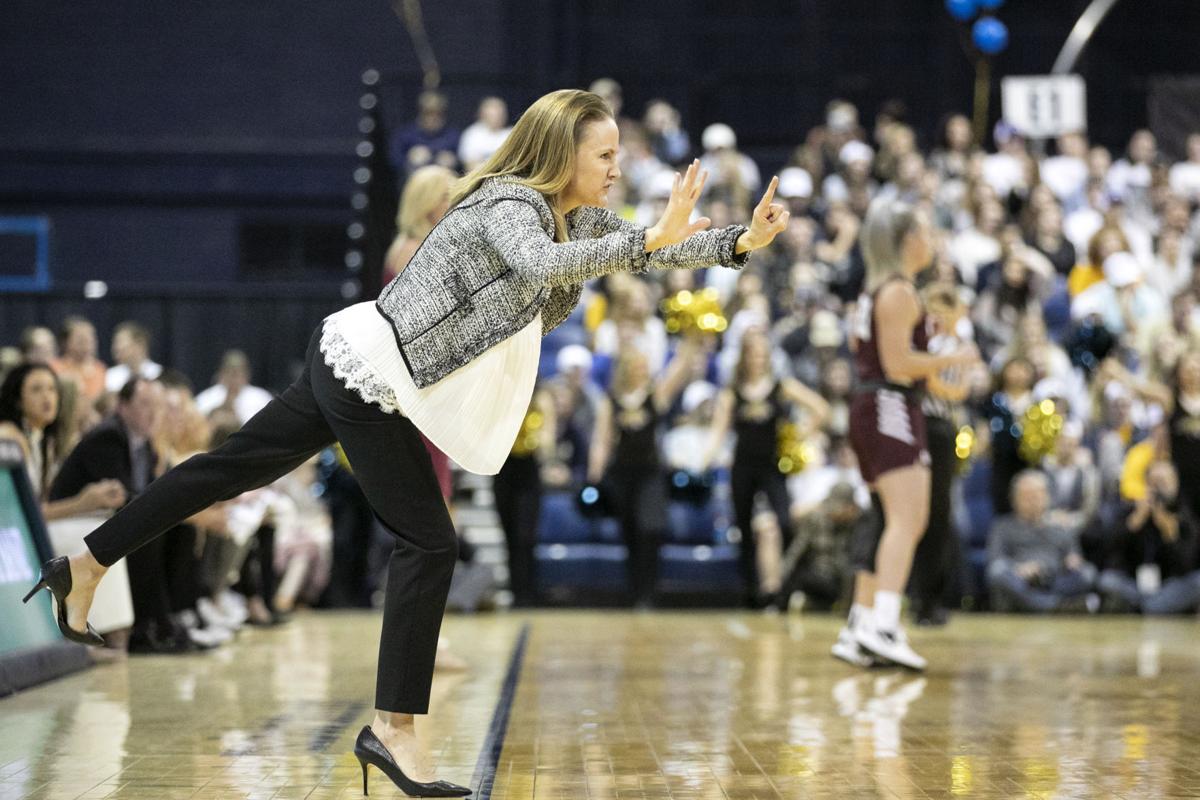 Montana State head coach Tricia Binford calls out a play to her team against Montana on Feb. 22 at Worthington Arena.

BOZEMAN — Confident the Montana State basketball teams will finish the season, athletic director Leon Costello is just as sure they will deal with demanding problems along the way.

Costello predicted MSU will face even more cancellations, with more positive coronavirus tests among teams and more personnel quarantining due to contact tracing. But he believes his department has the resources to push forward.

Montana State men’s basketball is scheduled to open the season at UNLV on Nov. 25, while the Bobcats women’s first game for now is against North Dakota on Dec. 6. But as MSU officials have learned, plans could change.

Costello remains certain games will be played in a safe manner. He believes both teams can complete at least 13 contests this year, which is the requirement for Division I squads to participate in the NCAA Tournament this year.

Costello noted the NCAA is pushing to hold a tournament in part because of financial necessity.

“There definitely is pressure, but I also think everyone now understands this whole thing is very fluid and we have to be flexible,” Costello said during a virtual press conference on Wednesday. “We can’t let a positive test, a quarantine or even a cancellation or two stop us from what the end goal really is.”

Costello is assured of MSU’s chances to play games in part because of COVID-19 tests available. Bobcats athletes will receive three tests per week, with both polymerase chain reaction (PCR) and antigen tests available to them.

An MSU spokesperson told the Chronicle this week that asymptomatic students on campus would not have access to tests. Costello said athletes take those tests more often so they can compete. He also noted tests might be available for visiting teams if needed.

“I feel really good about the protocols that are in place,” Costello said. “To have (testing) right here at our fingertips has been a huge advantage for us.”

Big Sky commissioner Tom Wistrcill told the Chronicle all 11 schools in the conference plan to test players, coaches, trainers and others in programs who interact closely three times per week. The conference has worked with Quidel, and several schools have contracted the company to manage their basketball teams’ COVID-19 testing. Costello said MSU has partnered with the conference and the NCAA to attain the needed tests.

In the fall, a key reason the Big Sky postponed its football season was because of the NCAA’s required once-per-week testing and the costs involved. The testing is now more feasible because there are less people in a basketball program.

Some issues still need to be ironed out, like how the conference will coordinate testing and travel for referees. Like everything since the pandemic began, plans are fluid. Wistrcill described them as being “written in pencil.”

“We feel good about where we’re at going in,” Wistrcill said, “and then we’ll see what happens.”

Bobcats games, at least to start the season, will be played without any fans. Costello said between rising COVID-19 cases in Gallatin County and in the state, as well as recent restrictions approved by local and state health officials, the fan disallowance was “decided for us.”

Costello stressed that he wants everything surrounding these events to be as safe as possible. He added that MSU has “plans for everything” if more people are allowed to attend games at different percentage levels.

Costello isn’t sure what has to happen for people to be allowed back in the stands. He noted MSU will closely pay attention to local case numbers and will continue to coordinate with health leaders.

Montana State’s scheduling has already been impacted. The women’s team’s home game against South Dakota School of Mines, originally slated for Nov. 25, was canceled. Costello said MSU is still exploring possibilities to line up a game that date, but it would have to be “the right opportunities” and it would “not be the end of the world” if the Bobcats don’t play a game then either.

Costello emphasized he wants his teams to simply have the most opportunities to play and the best chance to reach that 13-game threshold.

“Whatever steps we have to take to get back quickly and safely, we’re going to do,” Costello said. “But I feel really good about getting through the conference season and playing as many games as we can.”

Wistrcill said seven players must be available for a team to begin a weekend series against a conference opponent. The Big Sky schedule features games on Thursdays and Saturdays against the same opponent each week.

There are no plans to reschedule any canceled conference games.

“We fully expect there will be some disruptions in the season,” Wistrcill said. “I don’t know how you can look at it and say (otherwise). Based upon what’s out there right now, there’s going to be some of those. But we have a plan for that, and we’ll just be happy to be playing basketball. To me that’s the most important thing.”

While Costello “feels good” about the contingencies MSU and the Big Sky have in place, he said those plans may have to be reassessed after a few nonconference contests are played.

Costello added the Bobcats are eager to play again for the first time since their conference tournaments were halted back in March. He’s excited to watch them compete, even if he has to stream it from home.

“We’re ready for whatever comes our way,” Costello said.

Robertson would take over the team should Choate be unavailable.

She doesn’t like to overthink hypothetical scenarios, but Tricia Binford has had to come up with plans for seemingly anything this season.

The Bobcats haven’t even scrimmaged full court in practice in the last six weeks because players have constantly been in and out of practice due to coronavirus-related protocols.

Like their counterparts at UM, Montana State backers have been trying to come to grips with not having the annual Brawl of the Wild on the Saturday before Thanksgiving.

Robertson would take over the team should Choate be unavailable.

Montana State head coach Tricia Binford calls out a play to her team against Montana on Feb. 22 at Worthington Arena.