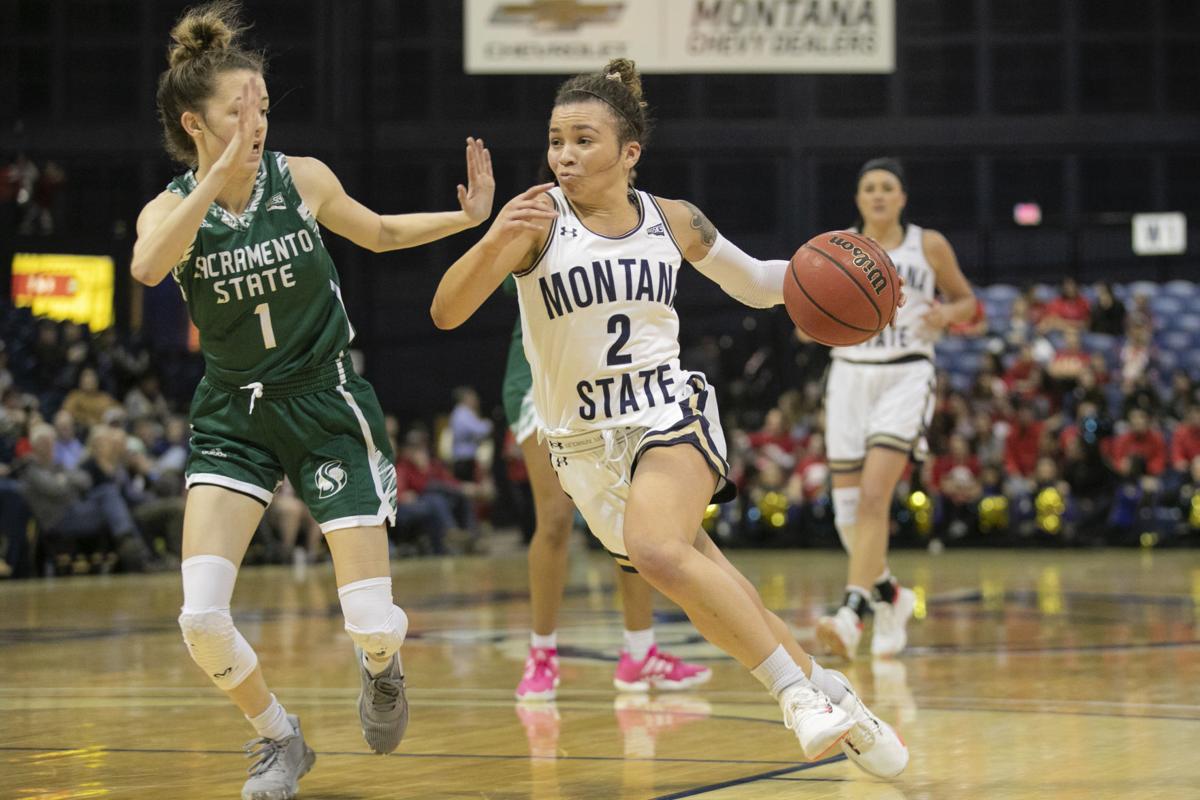 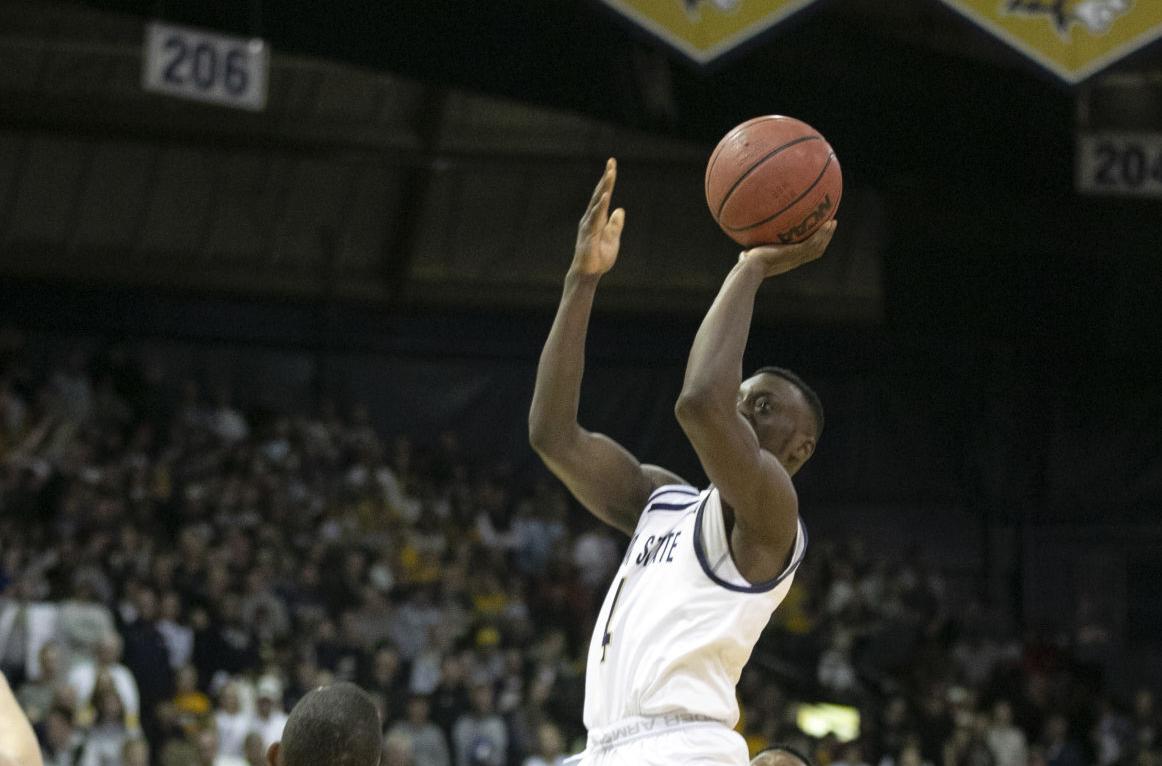 Montana State guard Amin Adamu takes a jump shot during a game against Montana on Feb. 22 at Worthington Arena.

BOZEMAN — Tricia Binford has heard all kinds of ways teams are approaching their nonconference games this upcoming season.

Montana State’s women’s basketball head coach has learned about potential “bubble concepts” taking place in Salt Lake City, Spokane and Las Vegas. She’s not entirely sure what they’ll be like. She doesn’t know how COVID-19 testing will take place at each of those sites.

Aside from all the virus concerns, she wonders about injury prevention when cramming games into a small time frame.

“It's for sure possible. They're doable,” Binford said. “But at the same time, we're considering budgets, we're considering are students on campus? Does that mean that they're going to be missing school? So there's a lot of things to consider. Obviously very different than the professionals.”

In September, the NCAA announced the college basketball season will begin Nov. 25. The shift from Nov. 10, which was in place before the pandemic, shows the NCAA is committed to keeping the regular season as normal as possible. But even that designation leaves significant wiggle room.

The NCAA also announced a “guideline” that recommends teams test athletes and coaches three times per week while in season. So now that schedules are being shuffled around, some teams are considering entering “bubbles” where they can gather with several other teams to play several games at single sites in controlled environments and hope testing protocols keep the virus shuttered away in the outside world.

The NBA in Disney World, WNBA at IMG Academy in Bradenton, Florida, and other professional sports leagues have pulled off this concept in recent months. But on the college level, this may be difficult even if for only a couple weeks at a time.

That said, the idea doesn’t differ that much from the multi-team events that typically fill nonconference schedules in November and December. But with extra expenses to pay for testing and likely less revenue because of limited or no ticket sales at home games, there’s other key factors in play.

“I think there's some possibilities for sure on those bubbles,” Binford said, “but I also know the budget situation. You've got to be really wise on what decisions we're making.”

By Nov. 25, at least 75% of Division I schools will have finished the in-person portion of the fall semester, including Montana State. That leaves a chunk of time at the start of the season to take advantage of less students on campus and classes not in session. Since a concern with bubbles is athletes missing class time, having games take place then eases that issue.

NCAA president Mark Emmert has mentioned the possibility of “bubbles or (a) semi-bubble” when discussing NCAA championships and said, “There’s a way to do it.” The 2021 Big Sky Conference men’s and women’s basketball tournaments are scheduled to take place in Boise, Idaho, in an arena inside of a hotel.

MSU athletic director Leon Costello aligned with Binford, saying there’s possibilities for bubbles to fill nonconference schedules. But he said the Big Sky Conference is aiming to hold its league games like normal beginning in January.

“Maybe you go for eight or 10 days and you get four, five games in those eight or 10 days,” Costello said. “That's a way to build your nonconference schedule. We've also looked at that concept as maybe a backup for some conference opportunities as well.”

To be eligible for the NCAA Tournament, men’s and women’s basketball teams must play at least 13 games against Division I teams — a 50% reduction from the previous requirement — and a minimum of four nonconference games.

The adjustments are in place as of now for just one year, the result of trying to play through the coronavirus pandemic.

“Hopefully we don't need to use it, but if we have to, we can use that (bubble) concept to help us get games in,” Costello said. “I think we'll always have that as a backup plan, but we hope that we're going to be able to go through a conference season and play the conference schedule as it was scheduled.”

Danny Sprinkle, Montana State’s men’s basketball head coach, said he’s simply not sure how likely a bubble could be. Since the new Nov. 25 start date wiped out games before then, he’s working on re-shuffling the Bobcats’ schedule.

“It's kind of a mess right now, but it's like that for everybody,” Sprinkle said. “We don't even know if fans are going to get let into games. Who knows? There's just so many unanswered questions right now that hopefully we'll work out here in the next three to four weeks.”

Binford said the women’s team has “rough dates” on the schedule, but there isn’t any one game she’d describe as a sure thing because of the fluid nature of the situation. Neither the MSU men or women have released their schedules, which was often done around August in recent years.

After watching other sports leagues start up, Binford is also worried about greater risk of injuries. While the sports leagues have protected against COVID-19 inside bubbles, jamming lots of games into a small window has led to more injuries and could be taxing physically. Plus, the unusual offseason has altered training schedules for athletes to prepare.

So with less than two months before the season starts, there’s still a bunch of unknowns.

“There's for sure some things on the table,” Binford said. “But once again, those are going to have costs to it so you've got to assess what you're able to accomplish and how you're keeping your kids safe.”

Montana State has three quarterbacks vying to be the starter who have won Division I games in their careers. Head coach Jeff Choate believes this is a good issue to have.

Decision made "in consultation with our health administrators and football coaching staff," school's AD says.

BOZEMAN — Shawn Dirden has left the Montana State men's basketball coaching staff and will be succeeded by Ken Moses, the director of basketball operations at Southern Illinois.

Through a pandemic, a postponed season and a changed coaching staff, Montana State football looked the same as it has for the last five years.

When the NCAA announced Wednesday that winter sport athletes will be granted an extra year of eligibility, seniors gained the chance to return in 2021-22.

Roars from Bobcat Stadium on a fall Saturday will be replaced by silence. The bustling in the parking lots won’t be the same. The final score will ultimately be inconsequential.

Montana State guard Amin Adamu takes a jump shot during a game against Montana on Feb. 22 at Worthington Arena.