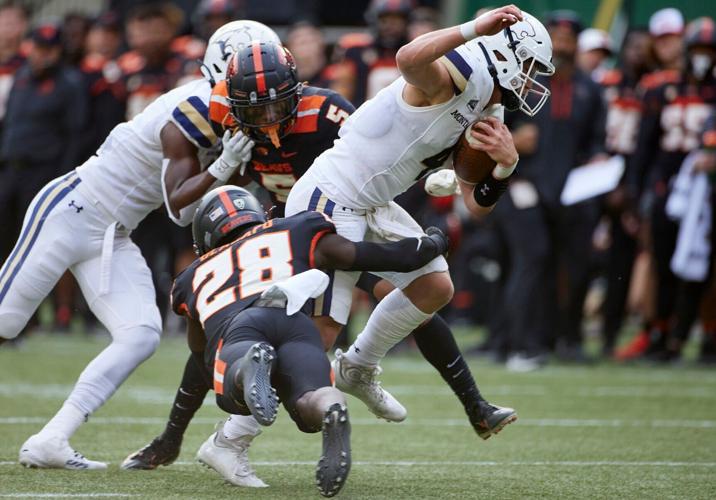 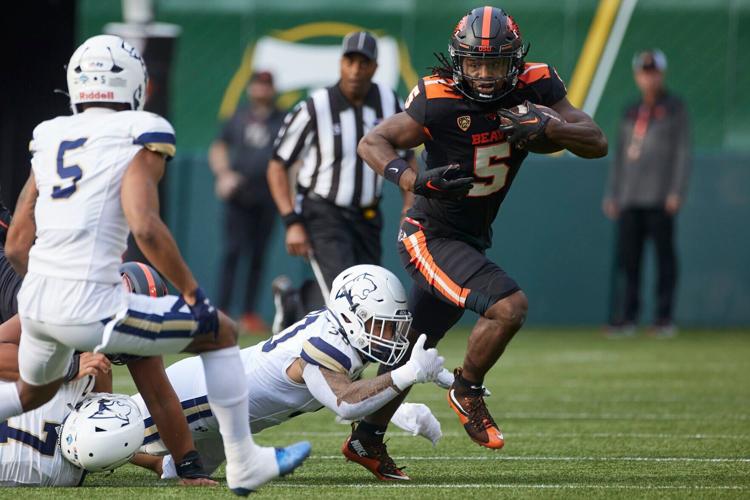 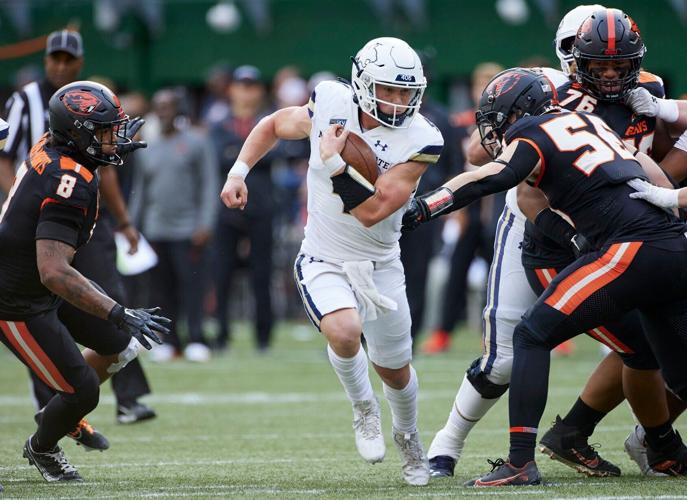 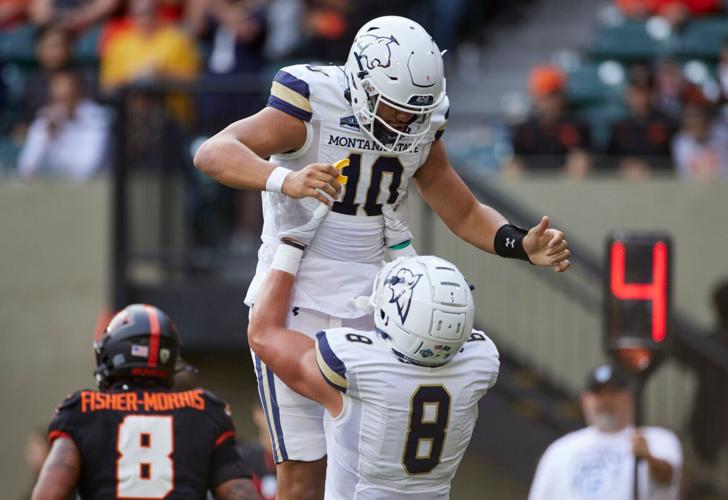 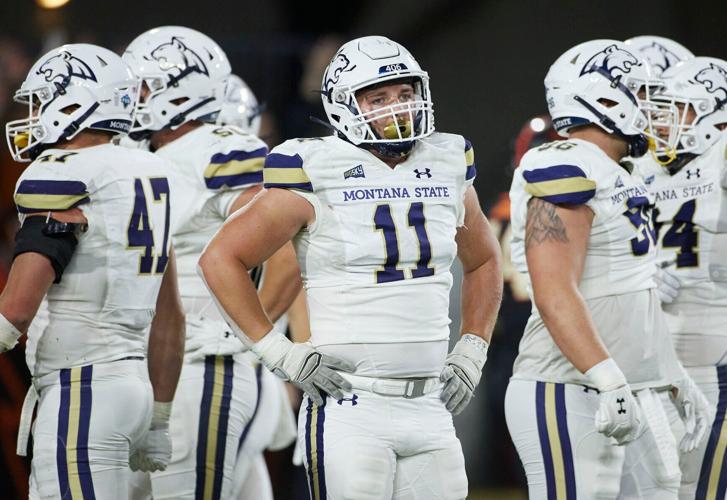 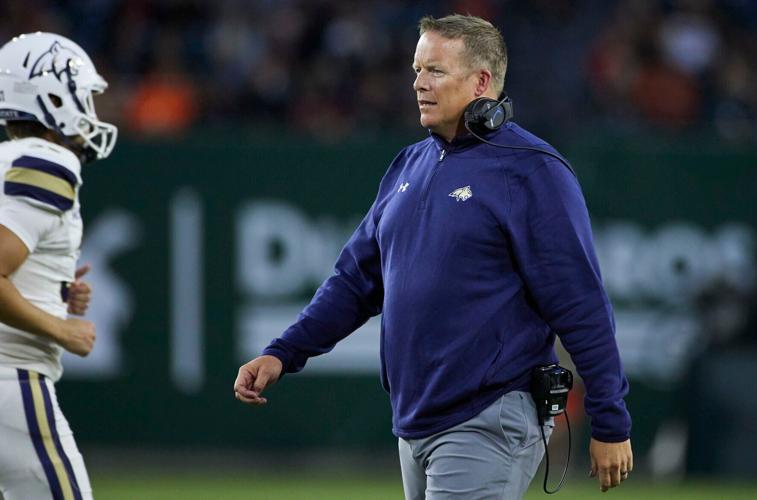 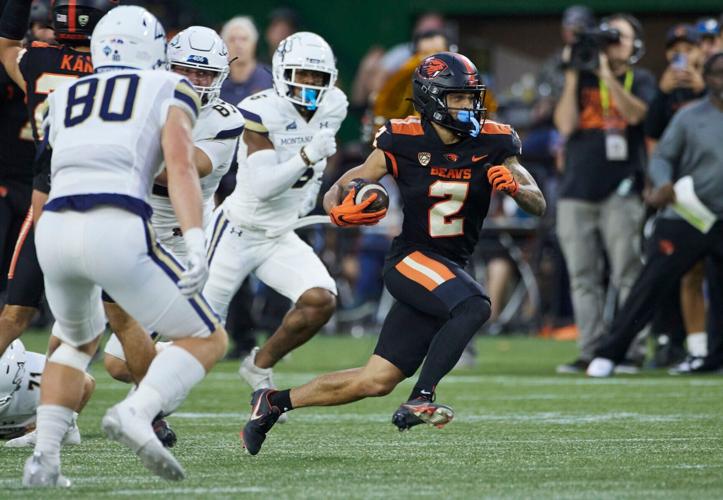 PORTLAND, Ore. — Instead of connecting on a deep ball down the right sideline to wide receiver Willie Patterson, Montana State quarterback Tommy Mellott’s pass landed perfectly in the hands of Oregon State defensive back Rejzohn Wright.

Clearly something went wrong, as Patterson had cut inside and Wright looked like a center fielder catching a routine fly ball. Wright returned the ball to the 12-yard line to set up another OSU score.

Things were slightly off for MSU all night, as the Bobcats fell to OSU 68-28 in Saturday's football game at Providence Park. That’s the second-most points given up by MSU since World War II (69 points scored by Kansas State in 2008 and Florida in 1988).

“We weren't coming in here to just show up and play in front of a big crowd," MSU head coach Brent Vigen said. "We were coming in here with the intent to compete in a football game and we didn't put ourselves in a position to do that.”

OSU finished with 540 total yards, including 216 yards on the ground. The Beavers also finished 10 for 12 on third downs.

"I know we gave up a bunch of points and a bunch of yards, but boy, the situations (the defense) were put in, that's not complementary football," Vigen said. "And that's what we pride ourselves on and it just didn't happen tonight."

After a penalty on the opening kickoff return, the Beavers got on the board first with a 7-play, 90-yard scoring drive that was capped off by a 25-yard TD rush from tailback Deshaun Fenwick. OSU quarterback Chance Nolan was 3 of 3 for 50 yards on the opening drive.

MSU responded with a scoring drive of its own, alternating runs between quarterbacks Mellott and Sean Chambers. Chambers punctuated the 10-play, 66-yard drive with a 7-yard rush on 4th-and-1 to tie the game at 7-7.

On the next possession, Oregon State drove back down the field, only halted momentarily by an unsportsmanlike conduct penalty on Fenwick. But as the second quarter began, Nolan found Tre’Shaun Harrison — who was tightly covered by MSU corner James Campbell — in the end zone for a 6-yard touchdown. After the score, Harrison was hit with an unsportsmanlike conduct penalty.

Harrison led all receivers with eight catches for 133 yards and a touchdown in the first half.

Mellott then threw his first career interception as OSU nickelback Ryan Cooper Jr. picked off a pass intended for wideout Marqui Johnson. Mellott finished 9 of 18 for 101 yards and three interceptions.

Nolan later punched it in for a 1-yard score to put the Beavers up 21-7.

But MSU wasn’t going away quite yet. Johnson took the ensuing kickoff 98 yards down the left sideline for a touchdown — the first kickoff return touchdown for the Bobcats since 2015. MSU was back to within one score.

“It was a sign that hey, we can play in this game," Vigen said. "We needed to follow that up with a stop and we didn't do that because we couldn't get them off the field on third down all night and that's certainly credit to them."

.@MarquiJohnson takes the kickoff 98 yards to the house for our first kickoff return touchdown since 2015!

That glimmer of hope quickly dissipated on the next drive as OSU went right back down the field. The Beavers continued attacking the Bobcats’ secondary and Nolan later found wide receiver Silas Bolden for a 24-yard touchdown. OSU scored again after Wright picked off Mellott, with Nolan finding wide receiver Anthony Gould for a 9-yard score.

With OSU up 20 points after a missed extra point attempt, the Beavers then forced MSU’s first punt of the game. OSU tried to get one last score before the end of the first half, but kicker Everett Hayes missed on a 46-yard field goal attempt as time expired.

OSU out-gained MSU 373-83 in the first half and the Beavers were 3-for-3 on red zone opportunities.

The scoring didn’t stop to open the second half, either. After MSU was forced to punt, Gould found the end zone once again with an 80-yard punt return. That marked the first punt return touchdown allowed by the Bobcats since 2003.

Later in the quarter, Chambers rushed for an 8-yard touchdown. The Beavers responded on the next possession, as an 80-yard kickoff return by Bolden helped set up a 7-yard touchdown run by running back Damien Martinez.

Gould added to his big second half with a 33-yard punt return and a 17-yard touchdown catch. Gould finished with 181 all-purpose yards.

MSU defensive back Simeon Woodard — who led the Bobcats with nine total tackles — was in coverage on the touchdown play. He gave credit to Gould making a tough catch in a tight window between two defenders.

“But me being a corner and hard on myself, I've got to be in a position to make that play every time,” Woodard said.

Defensive back Jaydon Grant then jumped a route for Mellott’s third interception of the game and running back Jam Griffin ran for a 23-yard touchdown.

Both Vigen and Mellott chalked the interceptions up to miscommunications, with the intended receiver running the wrong route on pick No. 3.

OSU added one more score late in the fourth quarter with a 3-yard touchdown run by running back Kanoa Shannon.

As MSU enters conference play next week coming off a 40-point loss, Vigen said it's important for the Bobcats to "own our performance." He added that there's plenty to clean up execution-wise, which will need to be addressed in the film room.

"We can't lose to this team more than once," Vigen said. "We lost to them tonight. We can't let this linger. And if you let the performance linger, you don't learn from the performance.”

MSU will face Eastern Washington on the road next Saturday to open Big Sky play.

Tommy and Sean combine for 67 yards on the ground on this drive, which ends in @seanmat10's second rushing TD of the game!

The No. 4 Montana State Bobcats (2-1) faced the Pac-12's Oregon State (3-0) in Portland to close the nonconference portion of their schedule.