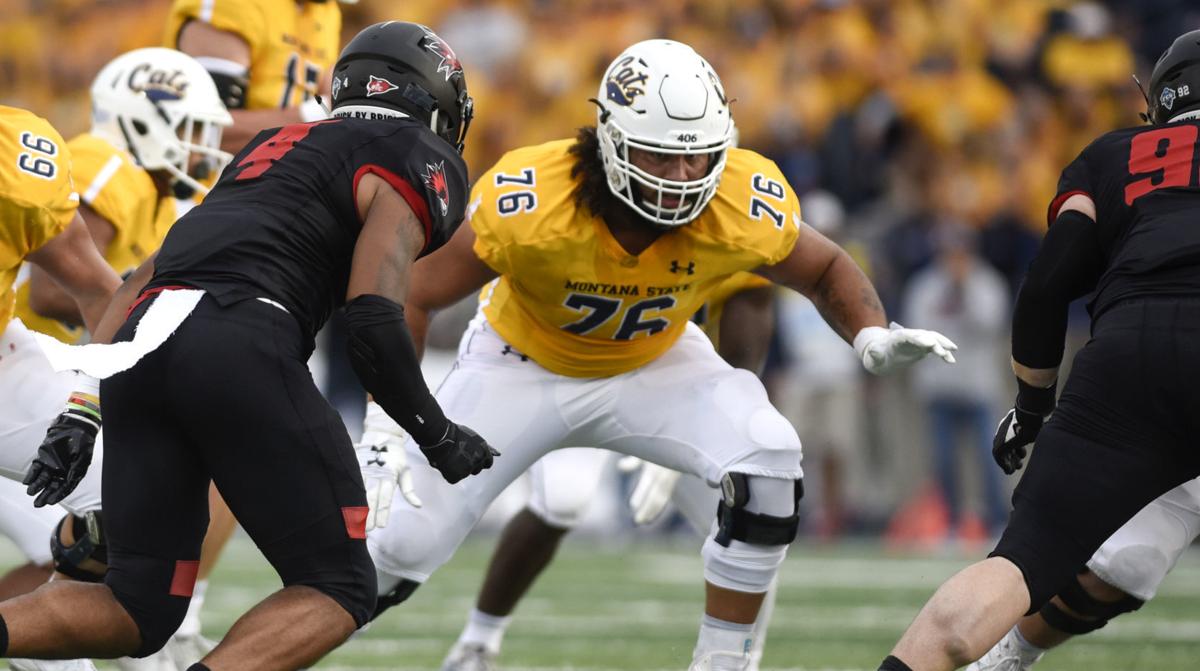 BOZEMAN — The sadness, the anxiety, the relief. Lewis Kidd feels all of it is a reflection of a harsh reality.

The Montana State senior offensive lineman, who is from the Minneapolis area, said he and his family have felt all of those emotions in the past year. George Floyd, in Kidd’s hometown, was killed by police, sparking global protests against racial injustice and police brutality in 2020.

Kidd also felt a sense of justice when former Minneapolis Officer Derek Chauvin was convicted of murder and manslaughter for pinning Floyd to the pavement with his knee on the Black man’s neck.

In the wake of Floyd’s death, Kidd and others at Montana State were vocal about the desire for change. Some participated in a protest in Bozeman. Others used their platform to kick off conversations about race.

A year later, these are matters MSU athletes and coaches still talk about.

“It’s crazy how much has happened in the past year,” Kidd said. “It’s kind of been a whirlwind of emotions, especially having family and friends back home.”

Kidd spoke with MSU assistant coach Kyle Risinger when the verdict first came out. Kidd worried what would have happened if Chauvin wasn’t found guilty and how Minneapolis would’ve reacted.

Talking to other Bobcats, Kidd said they felt the verdict was a “best-case scenario.”

“It was difficult, but it brings a little bit of justice I feel like in my personal opinion,” Kidd said. “I think a lot of guys feel that same way.”

Bobcats safety Ty Okada is from Woodbury, Minnesota, part of the Minneapolis metropolitan area. He told MTN Sports he struggled to find words to describe the situation.

“It’s sad,” he said. “… You want to be there for people. But you’re just devastated. It’s tough when you don’t even have the words and it continuously happens like that. What do you even say at this point?”

When Jeff Choate was the Bobcats’ head coach a year ago, he was outspoken during virtual press conferences about the matter. Kidd said Choate fostered an environment for players to express themselves, as difficult as it might have been.

In fact, Kidd noted that is one of Choate’s lasting effects on the program.

“I think it’s improved our quality of relationships in the locker room and being respectful of one another, of different backgrounds and upbringings,” Kidd said. “I think it’s brought us closer together.”

MSU players and coaches, Kidd added, have a “safe space and welcoming environment” for them to talk about whatever is on their minds. That hasn’t changed under new Bobcats head coach Brent Vigen.

Vigen said he wants to lean on MSU’s team captains and leaders to listen to others on the team. He met with each player when he first took the job with the hopes they could feel comfortable talking with him about important matters.

“Having conversations is the No. 1 piece to it,” Vigen said. “Be open to have conversations that are unscripted that could go in whatever direction just so we have those healthy, open talks.

“I think as we get into the summer, we’ll have some reflection on this past year and all that’s gone on. And how it’s affected our young men will be the focal point. Nothing scripted, nothing specific, but we’re very supportive of our athletes at the end of it.”

Okada, who is white, said his teammates of color have expressed “a bunch of different emotions, and rightfully so.” But he also conveyed confidence in MSU’s locker room, hoping the players could rely on their connections with others.

“People are upset,” Okada said. “They want to see change. They want to see action taken. Sad. That’s why I don’t have words, because if I’m feeling this way as a white person, I can’t imagine how someone in those shoes would feel.

“It’s tough because you want to be there for people. … Sad, angry, and just looking for accountability really.”

When asked if he believes society has changed in a positive way, Kidd said progress is relative. He added almost any walk of life has room for improvement.

He believes the United States is a “great country” which provides people with many opportunities. But the past year could provide a chance to reflect on the nation’s shortcomings.

“Change is just a difficult thing to accomplish,” Kidd said. “Nobody likes change and nobody’s really comfortable with change, and obviously there’s something that needs to be changed and different things that need to be improved throughout our country, but I don’t know if there’s ever a measurable way. There’s incidents where you can see things happening that are good and improving, and then there can be one thing that happens that just kind of tears down that progress and you wonder if anything truly ever changed.

“I don’t know necessarily how that cycle can be broken, but I’m hoping that incidents like this and the verdict leads to that positive change.”

Look to the Chargers and Seahawks to make the playoffs

The Billings Senior grad is now a seven-time All-American for Stanford.

Montana State’s Caleb Berquist and Paige Rasmussen are leading their events after two go-rounds at the CNFR in Casper, Wyoming.

After full seasons of leading the Big Sky Region, Montana State’s Jaret Whitman and Paige Rasmussen are hopeful their momentum continues on the national stage.

Four Bobcats will have at least one more week of competition in their season as they chase spots on Team USA.