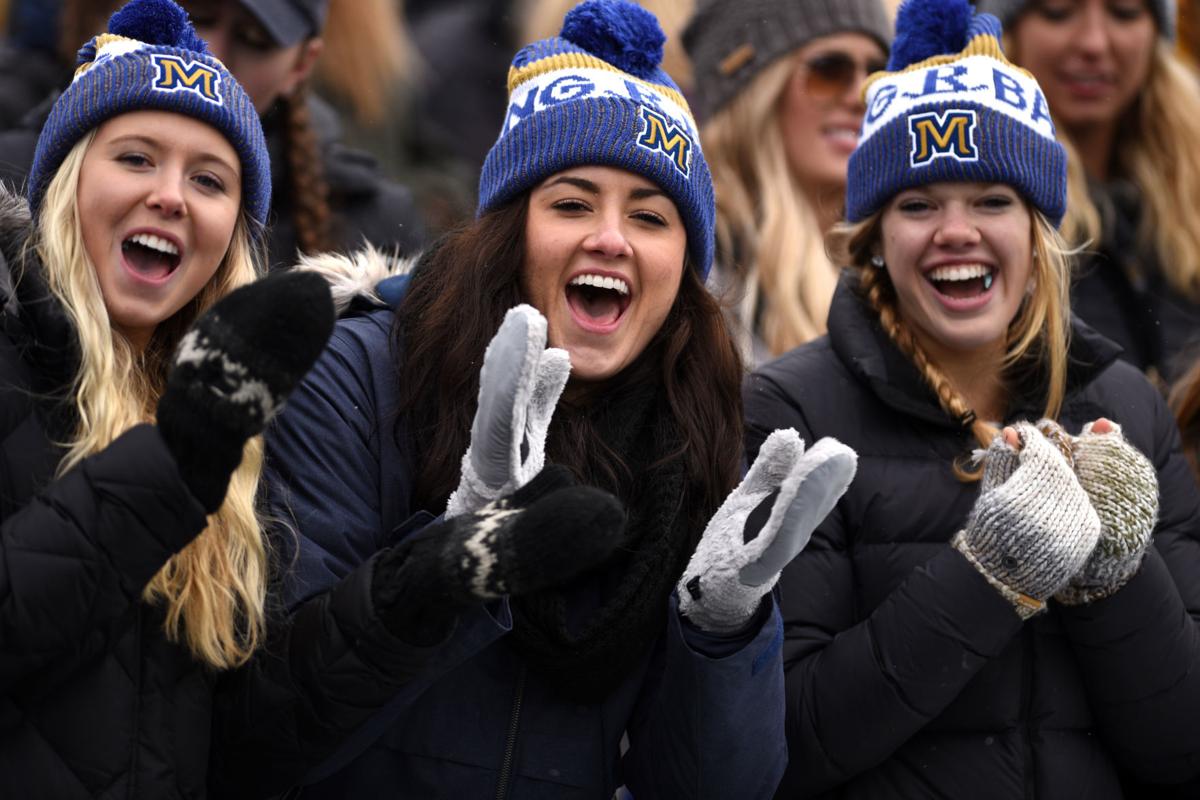 Fans cheer during Montana State’s game against Idaho on Oct. 13, 2018, at Bobcat Stadium in Bozeman. 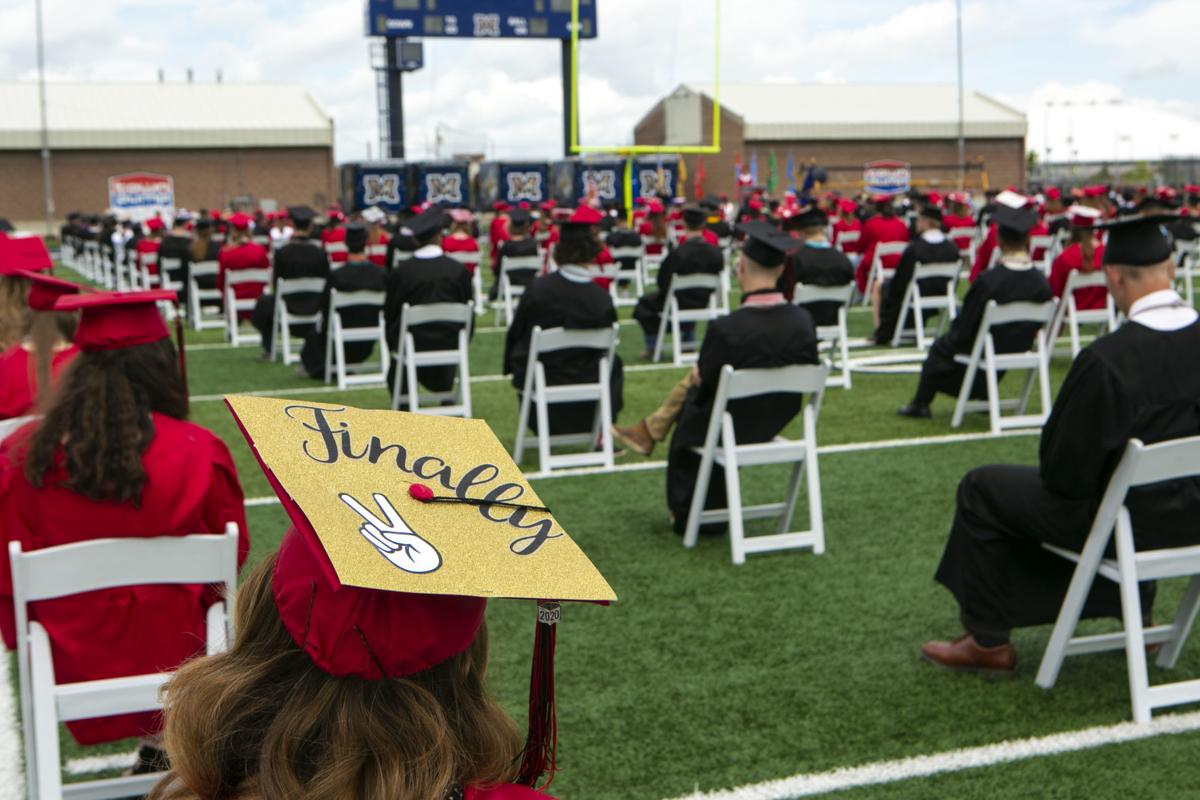 The Bozeman High class of 2020 celebrates its commencement June 7 at Bobcat Stadium.

BOZEMAN — Chris Hayden has tried to gather advice from everyone he can.

The Montana State director of sports facilities spoke with one of his friends who works for Turner Sports, which broadcasted “The Match” golf competition featuring Tiger Woods, Phil Mickelson, Tom Brady and Peyton Manning. Hayden asked if he could see a draft of the event’s safety protocols to maybe spark some ideas.

Hayden’s friend told him that was fine, but the final rules probably wouldn’t be in place until the players were walking down the first fairway.

Hayden now anticipates MSU could be coming up with protocols, regulations and contingencies for Bobcat football games all the way until the day before the 2020 football season opens.

“We’re all trying to eliminate as many surprises as we can,” Hayden said during a virtual press conference. “But in this world, we’re all adaptable, we all have backup plans. I hope we’re not writing our final plans during the first kickoff of the season, but there will be details that are figured out all the way up until the season.”

Montana State athletics leaders have navigated seemingly countless challenges during the coronavirus pandemic. But fan attendance at sporting events — whenever they resume — are one of those details which has yet to be solidified.

Hayden laid out only some aspects that have to be considered if social distancing and sanitary guidelines are still in place when the football season is set to begin on Sept. 5 against Long Island for the team’s annual Gold Rush game.

“We’ve definitely shown we can have fans,” Hayden said. “I think everyone is still trying to work through what levels of fans. … Everybody wants to get back together and find some sort of way to get community involvement and engagement.

“I think that people want that, and I think there’s a blueprint to make it happen and still value the safety stuff of it.”

MSU hosted Bozeman’s and Belgrade’s high school graduations earlier this month at Bobcat Stadium, where students sat 6 feet apart from each other. Hayden believes they gave his department some insight on how to have fans at football games.

He said these were the first public events MSU held since the Class AA basketball tournaments at Brick Breeden Fieldhouse in mid-March.

Hayden wasn’t sure if health officials would even sign off. His department took a backseat as the schools coordinated with the Gallatin County Health Department and received approval.

Planning was different for the two ceremonies because about 200 graduates attended Belgrade’s event and 500 were at Bozeman’s. County health leaders said they were comfortable with about 1,000 people at the ceremonies, so Belgrade students could each invite four people and Bozeman’s could invite two.

Hayden found social distancing easy with that maximum capacity. Families could sit in their own clusters but had to sit apart from others. To do that, people were assigned seats staggered in the stands. For example, if people were in seats 1-4 on one row, 5-8 were left open — leaving at least 6 feet from another family.

And if those people were in Row 1, the second row was left open and the third had people in seats 5-8 to maximize the distance from the people in the first row.

Tickets were assigned gate numbers for people to enter the stadium and times to do so to avoid clustered rushes. About 200 people were told to walk into different gates at 10 a.m. and another 200 were asked to arrive 10 minutes later.

Everyone was seated as close to the video board as possible. No concessions were open. Some restrooms were available, but custodians from the schools were assigned to them as only one person was allowed to use a restroom at a time.

Hayden noted, however, some students were hugging friends they hadn’t seen in months despite the distancing measures. While those interactions are natural, he said, he also began to wonder how group gatherings — like when people roam the field after Bobcat football games — can be limited to smaller sizes.

Hayden admitted graduation ceremonies are easier than football games because they’re shorter and didn’t include gatherings hours before kickoff in the parking lots for tailgating.

Hayden said Bobcat Stadium may need to have one direction for flow of people in the stands where one gate or set of stairs is for exits and another is for entrances like local grocery stores have done with alternating aisles. Concessions may have pre-packaged condiments and one designated person at the cash register with everyone there wearing gloves and masks.

Bathrooms may have every other stall and sink blocked off with a limited capacity. Portable toilets may be added near the stadium, which may also need an extended perimeter if designated entrance times are going to be used again.

This is all assuming sporting events happen. On Wednesday, the NCAA Division I Council approved a six-week football practice plan. That means MSU can begin limited team activities on July 13 while preseason practices can begin Aug. 7.

However, Dr. Anthony Fauci, the top U.S. infectious disease specialist, told CNN on Thursday that “it would be very hard to see how football is able to be played this fall.”

In Gov. Steve Bullock’s three-step plan to reopen the state during the pandemic, only the last phase lifts restrictions on group sizes, though recommendations for people to limit time in crowded environments will still be in place. Hayden said he’s not sure what that means for sporting events.

Montana State will have to take advice from several entities including local health officials and the U.S. Department of Education. Hayden said leaders at MSU like President Waded Cruzado are starting to narrow down potential plans for public gatherings, but deadlines for those decisions aren’t finalized.

“Priorities are always changing, and new information is coming along,” Hayden said, “but it does help us that campus has put together a plan and released the plan and is working toward school opening.”

Bobcats director of athletics Leon Costello has also said MSU has considered flow of traffic into Bobcat Stadium. With its current entrance system with one person at a time through metal detectors, temperature checks could also be feasible to monitor people’s health.

“Those processes really lends itself toward being able to do more as far as screening goes when people are coming into a stadium such as Bobcat Stadium,” Costello said. “What that includes is still probably up in the air.”

While MSU is trying to find ways to accommodate the most people, Hayden said season ticket holders and students would likely be prioritized if attendance is limited. He added single-game group sales or packages for tickets to multiple games may be reduced as well.

“Obviously we want to get everyone there,” Hayden said. “If we do need to operate in some form of reduced capacity, I think trying to figure out what the best way is to accommodate the most people. Everybody is going to have to make a sacrifice somewhere.”

All of these potential health protocols could have a hindrance on general admittance. MSU averaged 17,281 people at eight home games in 2019.

Costello estimated the athletic department brought in less money than past years because spring sports were canceled. MSU made $8.7 million in revenue from football in 2018-19, according to U.S. Department of Education analysis.

That impact could be even more substantial if less tickets were sold at football games.

MISSOULA — As more student-athletes have begun to enter their respective workout facilities at Montana and Montana State, there is tentative optimism among campus leaders their protocols are working.

Before becoming Montana State’s offensive coordinator, Justin Udy studied as much as he conceivably could.

"At some point you just have to tell yourself now is the right time," Person said.

Fans cheer during Montana State’s game against Idaho on Oct. 13, 2018, at Bobcat Stadium in Bozeman.

The Bozeman High class of 2020 celebrates its commencement June 7 at Bobcat Stadium.