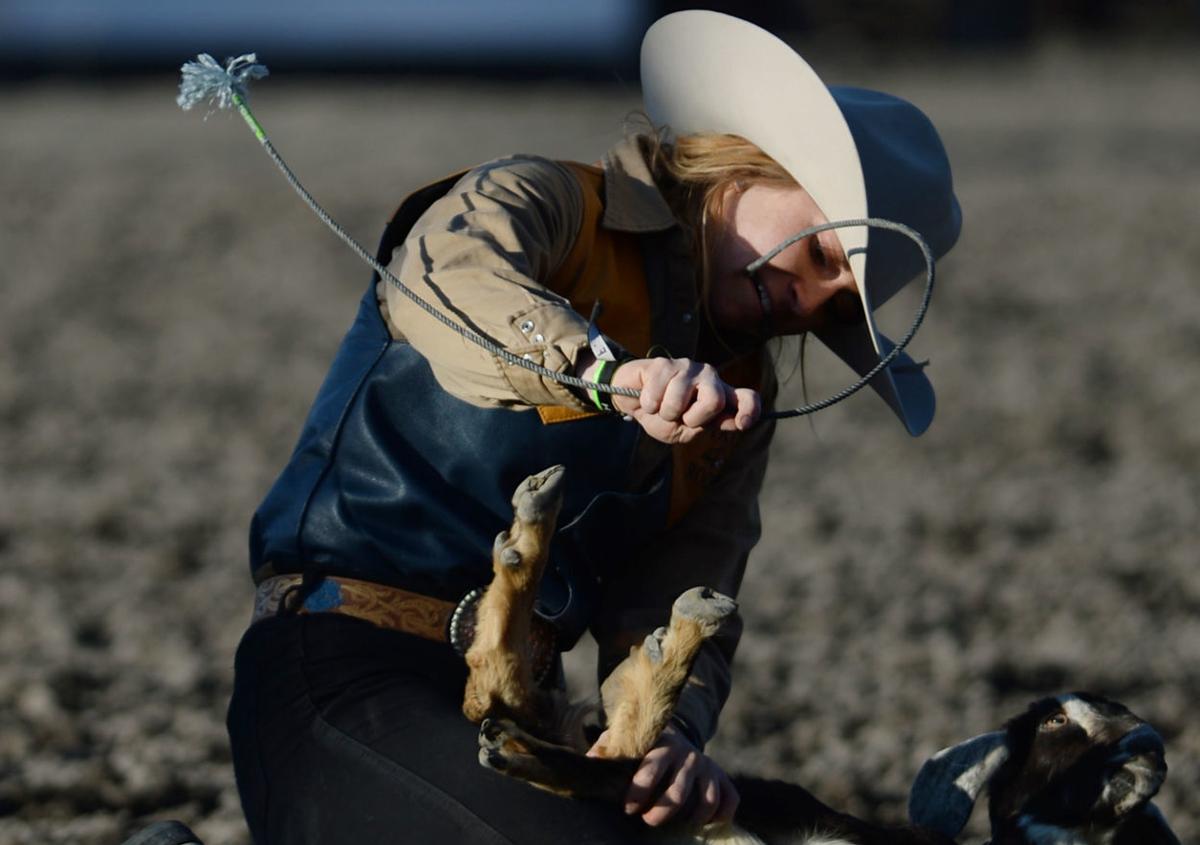 Montana State’s Paige Rasmussen competed in the goat tying competition at the MSU spring rodeo in April in Bozeman. 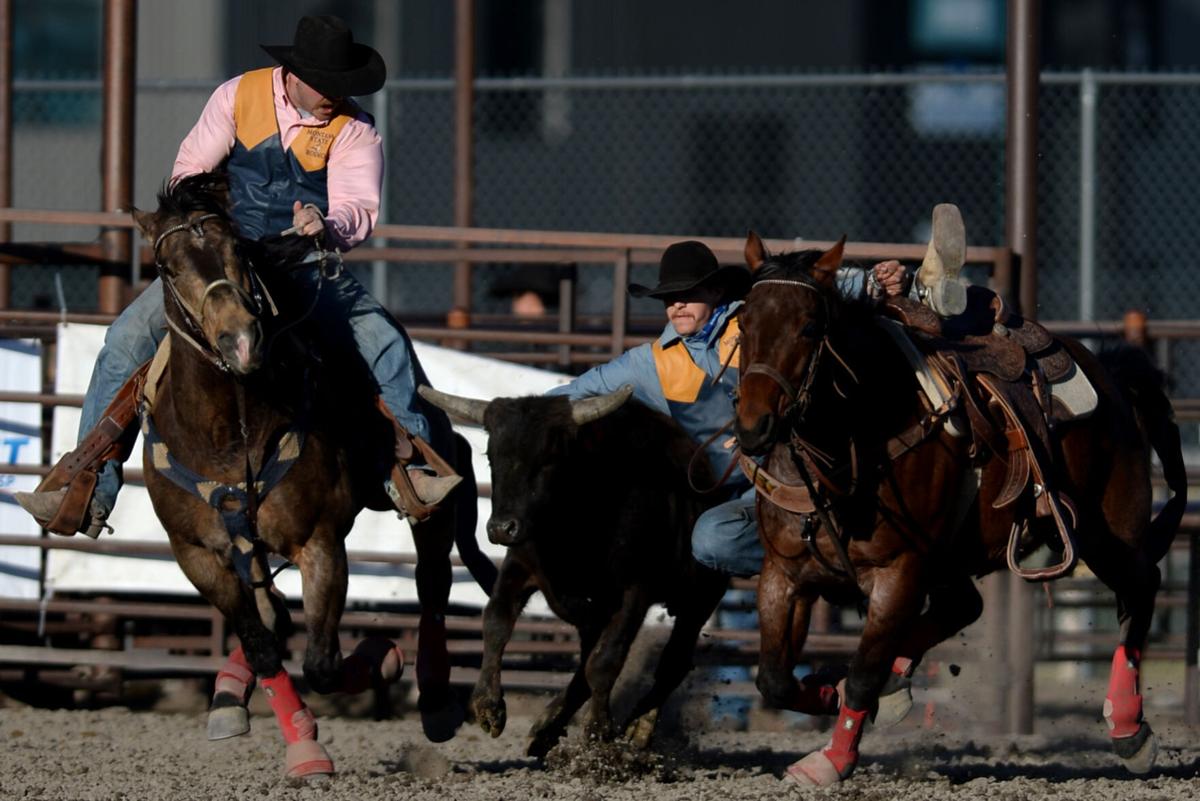 Montana State’s Jaret Whitman competes in the steer wrestling on the second night of the MSU spring rodeo on April 9 at the Gallatin County Fairgrounds.

BOZEMAN — After full seasons of leading the Big Sky Region, Montana State’s Jaret Whitman and Paige Rasmussen are hopeful their momentum continues on the national stage.

As the College National Finals Rodeo begins on Sunday in Casper, Wyoming, Whitman and Rasmussen enter as the men’s and women’s all-around champions for the region.

Rasmussen, a sophomore, won the Big Sky’s goat tying title and added breakaway roping as her second CNFR event by virtue of being the all-around winner.

She had a strong goat tying season as a freshman also, but the spring rodeos, including CNFR, were canceled because of the COVID-19 pandemic. She is glad to have picked up where she left off.

“And now that it’s actually happening, all that hard work and staying motivated really paid off,” said Rasmussen, who is originally from Choteau but graduated from Belgrade High.

Rasmussen added occasional points in the barrel racing and breakaway roping throughout the season, but week after week it was the goat tying that proved to be her smoothest event.

After dismounting her horse, she is quick to hook her leg over the rope affixed to the goat to get an easier grasp. Once the goat is flanked, it’s a quick flurry of her hands to get the animal tied.

It’s a calculated process that unfolds at a blistering pace.

“Knowing when to get off (your horse) depends on how fast you’re going,” she said. “It’s tough to pick a spot because every arena is different, and so when you get your timing with your horse it’s pretty easy just to know when you should be getting off.”

As for what happens next: “Once you have your leg over that rope (the goat) can’t really get away from you,” Rasmussen added. “You just really have to keep your feet moving.”

Rasmussen said she chose breakaway roping as her second event because she felt more confident there than in barrel racing.

“There’s a lot more you can control in the roping compared to barrel racing,” she said.

Rasmussen has an older sister, Shelby, who is a senior on the MSU rodeo team and will also be competing at CNFR this week. Shelby has an extra year of eligibility because of the pandemic, but Paige said she wasn’t sure if her sister planned to use it or not.

Because of that uncertainty, they will look to soak up the experience of competing at the college finals together in what could be Shelby’s last year.

“It’s so exciting because not only are we going to go compete together, but we’re competing in the same two events and so we’ve been training super hard together and pushing each other,” Paige said. “It’s made us better and made us closer.”

Whitman, a senior from Belgrade, enters CNFR this week with the goal of striking a balance in his approach to his two events: steer wrestling and team roping.

“When I rope, I try to be conservative and try to make sure I don’t beat myself and stay consistent,” he said. “And in the bulldogging, I’m the opposite. I’m aggressive. I want to go win first every time.”

As the region’s men’s all-around winner, he chose steer wrestling as his second event over tie down roping. He thought it would give him a better chance to score points for himself and for MSU’s team.

Whitman partnered this season with freshman Teegan Leno in the team roping, and they put together a solid season to qualify for CNFR. Whitman said it was MSU head coach Andy Bolich who had the idea to pair them together.

“I didn’t really know (Leno) very well, but I heard a lot of great things about him,” Whitman said. “He showed up to Bozeman, and I kind of clicked with the kid.”

He admitted they got off to a “rocky start,” however. Whitman could see his teammate was taking it pretty hard, so he tried to build him back up.

“I kept putting it in his head that there was nobody who believed in him more than me and that if we have a couple mistakes, ‘Don’t worry about it,’” Whitman said. “‘We’ll keep each other going.’”

And so they did. Their spring season was more fruitful, and their contrasting roping styles were a big part of that.

Whitman, as the header, likened himself to the quarterback of the team and Leno, as the heeler, to the wide receiver. He knows he has to put the steer in a place where it’s easiest for Leno to make the play.

“I’m just going to stay conservative and stay consistent and try to just let him do his thing and be in the right position,” Whitman said. “I think that has a lot to do with our success.”

Because of the camaraderie they have formed and the trust they have in each other, Whitman is optimistic about their chances at CNFR.

“Naturally, I’m not a roper but Teegan is. Teegan’s extremely handy with a rope, and he sees cattle really well,” Whitman said. “Our plan the whole time is, ‘I’m just going to catch every steer and, Teegan, you go at them and win something.’ … Teegan wants to go in there and get them roped on the first hop, and he usually does. If I just stay consistent and Teegan does his thing, there ain’t a whole lot of places we can’t win at.”

How the U.S. Women’s Soccer Team trained for Tokyo heat

Families around the world cheering for Olympians

Families around the world cheering for Olympians

First time triathlete? How to stay safe in open water

First time triathlete? How to stay safe in open water

The move comes as Southern Utah is slated to leave for the Western Athletic Conference at the end of the 2021-22 academic year.

Both the Grizzlies and Bobcats received first-place votes.

Here is why some Big Sky Conference seniors elected to take the extra season of eligibility given to them as some are chasing titles and others are prepping for the next level.

Montana and Montana State combine for seven of the 30 players who land on the Big Sky preseason all-conference team.

Montana's football game at Eastern Washington will be televised on ESPNU.

Montana State football will have one game televised on ESPNU and two others on ROOT Sports this fall.

Montana State had one of the youngest teams in the country last season.

Montana State will spend plenty of non-conference time on the road this winter.

Montana State athletics 'feel like we're back to normal,' but COVID-19 concerns linger

MSU sporting events will be at full capacity, and the school isn't requiring vaccines for its athletes.

Montana State’s Paige Rasmussen competed in the goat tying competition at the MSU spring rodeo in April in Bozeman.

Montana State’s Jaret Whitman competes in the steer wrestling on the second night of the MSU spring rodeo on April 9 at the Gallatin County Fairgrounds.