BOZEMAN — Willie Patterson thought he had made a shifty move to gain separation from a defender. He was wrong, at least going against Richard Sherman.

The Montana State receiver from Tacoma, Washington, was back near his home, training with NFL stars in seven-on-seven drills. During the coronavirus pandemic, opportunities for players in college and in the pros were limited, so they organized their own workouts. Sherman, a former All-Pro, was defending Patterson.

Patterson, he recalled Sherman telling him, allowed for too much space between the two of them. This allows cornerbacks more time to recover if a receiver makes any kind of move. Patterson, at 5-foot-9, 180 pounds, should threaten defenders with his quickness.

This was one of several improvements Patterson made during 2020, and even the last three years. Two broken collarbones hampered his contributions to MSU in 2018 and 2019, then the pandemic made him wait another year until he saw the field.

But once he did, he was electric. He recorded his first and second touchdown — the latter being celebrated with a backflip — on Saturday against Drake at a raucous Bobcat Stadium. This was a culmination of what threatened to be overwhelming struggles becoming ways in which he progressed.

MSU head coach Brent Vigen wasn’t fond of Patterson’s backflip. The wide receiver was flagged for it, and Vigen doesn’t want celebrations to bring attention to an individual in that fashion.

But after everything Patterson has been through, Vigen understood why he would be ecstatic.

“It's been a long road to get to this point,” Vigen said. “A lot of resiliency, and I think he believes in himself. I know the quarterbacks in particular, he's a guy that they want to target. He's going to create some separation and then when we get the ball in his hands whether it's offensively or on the return game, he can really do some things with it.”

Patterson hadn’t dealt with an injury that cost him time throughout his football career. That changed when he began starting games at Montana State as a redshirt freshman. A broken left collarbone in Week 7 at Weber State took away most of his 2018 season.

Patterson worked himself back to health and into the Bobcats’ rotation at wide receiver. But in Week 2 during 2019's Gold Rush, he broke his right collarbone. By the time he was available, the Bobcats had solidified their roles, not leaving Patterson with many opportunities of his own.

Patterson joked he should’ve gone to the casino with “literally the worst luck.”

“It was kind of more of a blessing because I got stronger, I got faster, I got to see the game from the sidelines a whole different way,” Patterson said. “I could have quit. I could have been like, ‘Hey, I'm done. Who's to say I'm not going to break another one? I'm little. I'm going to get hit hard. Everybody is going to be bigger than me.’ And I said, ‘No, I've got something bigger here. It's coming.’”

Patterson provided brief glimpses of what he could do. Teammates insisted Patterson was among the most dynamic playmakers on the team.

So he maintained his persistent attitude, adamant one day he would display his potential. With screws and plates, Patterson feels his collarbones are healed now.

He had to wait longer to play than anticipated because of the pandemic. However, he used this time to his advantage. Working alongside the likes of Sherman, Seahawks linebacker Bobby Wagner, Seahawks wide receiver DK Metcalf and other pro and college athletes, Patterson gained an in-depth understanding of his position and how to attack defenders.

Having lined up across from Sherman, Patterson gained even more belief in himself when he returned to Bozeman. He ran routes with new quarterback Matthew McKay. He cleared snow with his fellow receivers to get more work in during the winter.

And now, either in practice or in games, Patterson reminds himself he’s faced the best. So whoever he competes against, he’s sure he can win in his one-on-one matchups.

Before MSU began the season, Patterson pleaded opponents would play man-to-man defense against the Bobcats in hopes of stopping their run game. He was sure he would take advantage. And he did.

Last week, Patterson broke out and caught two touchdowns. The first was a screen which he took 23 yards before he dove across the goal line for a score. The second, McKay found him deep one-on-one. He caught the pass over his shoulder and ended up with his second TD, a 31-yarder.

After the game, Vigen called Patterson “dynamic” and that the Bobcats would look to Patterson in the slot against those types of defensive schemes. This week, MSU offensive coordinator Taylor Housewright was asked what Patterson brings to the offense.

“A lot of headaches with backflips,” he responded. “He's an awesome kid and he's excited and he's fun to be around. … He's doing a heck of a job.”

Through all he’s faced, Patterson’s performance was reason for jubilation. He was on the field, showcasing all he had gained through misery and uncertainty.

Fitzgerald is one of at least seven Bobcats to miss one or both of the first two games due to injury.

The team that ran the ball 301 more times than it passed two years ago is close to even this season. 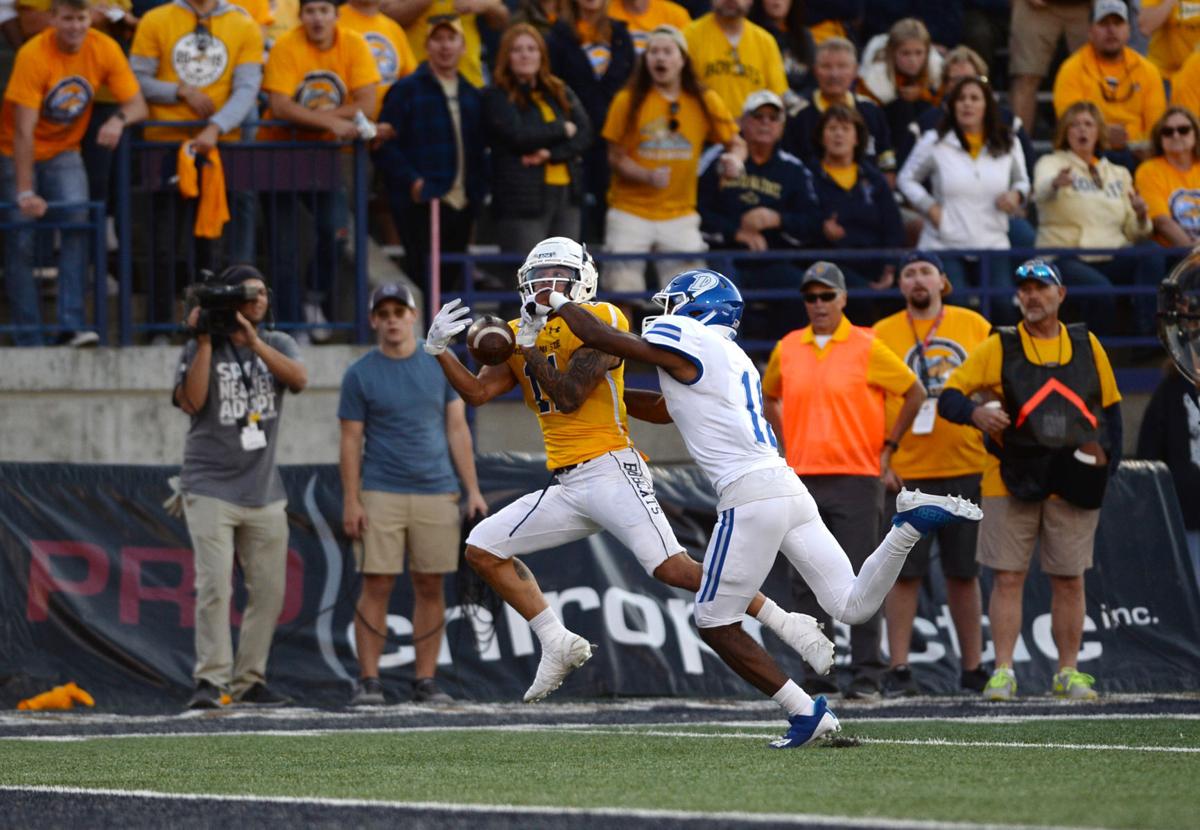 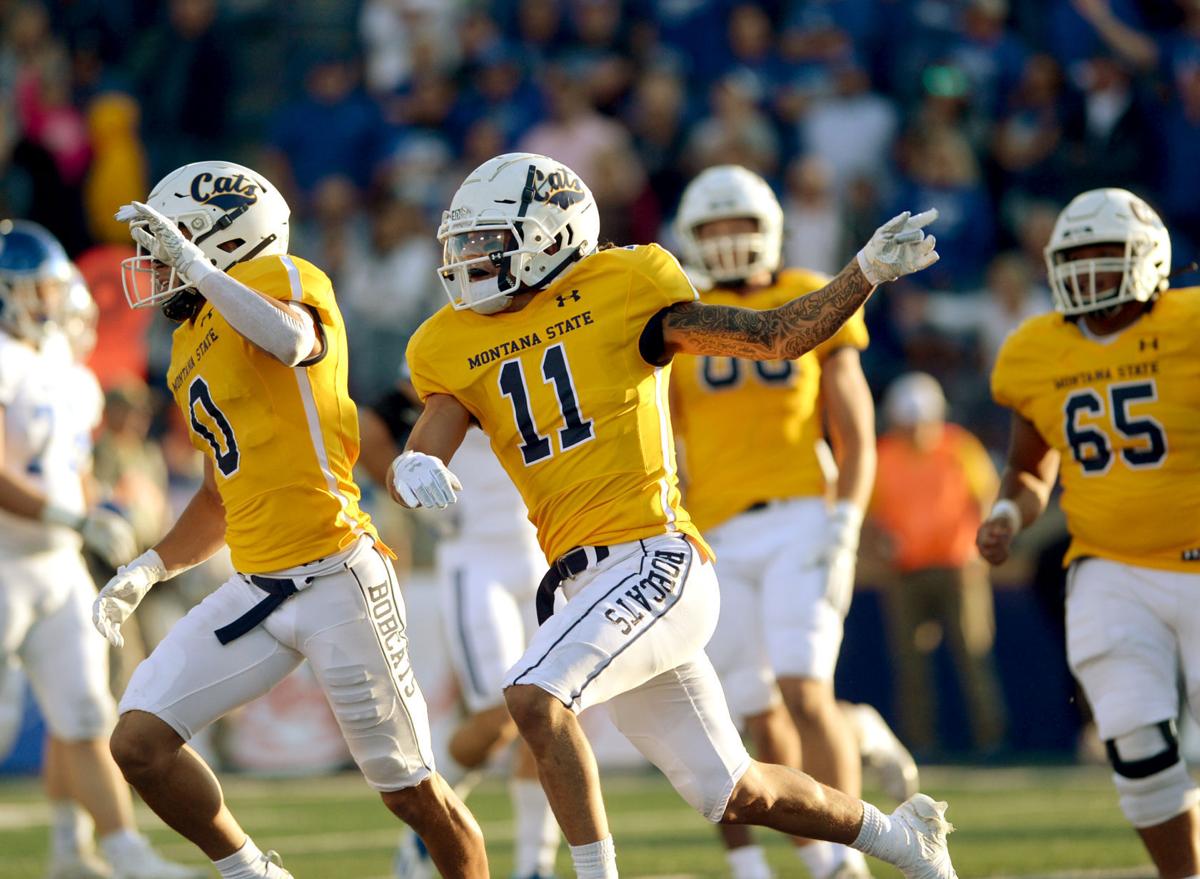 Montana State's Willie Patterson celebrates a touchdown against Drake on Saturday at Bobcat Stadium in Bozeman. 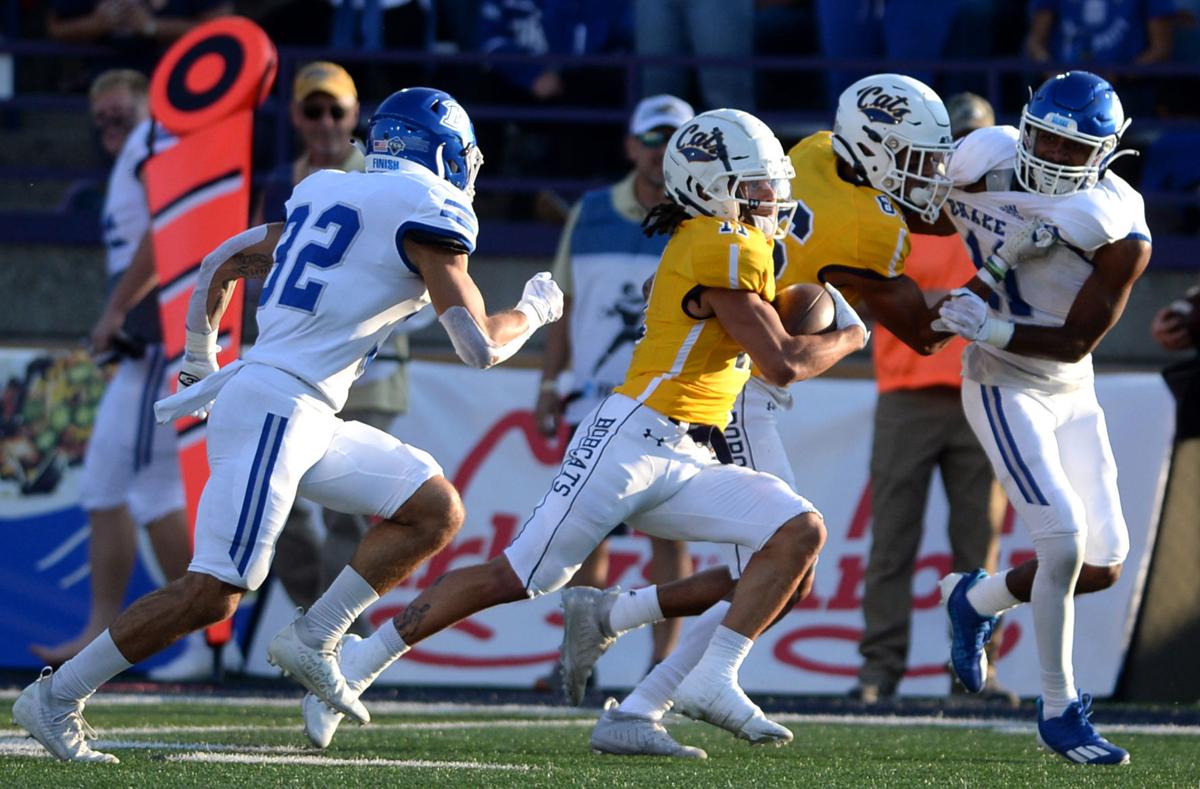 Montana State's Willie Patterson runs for a touchdown as teammate Lance McCutcheon blocks against Drake on Saturday at Bobcat Stadium in Bozeman.