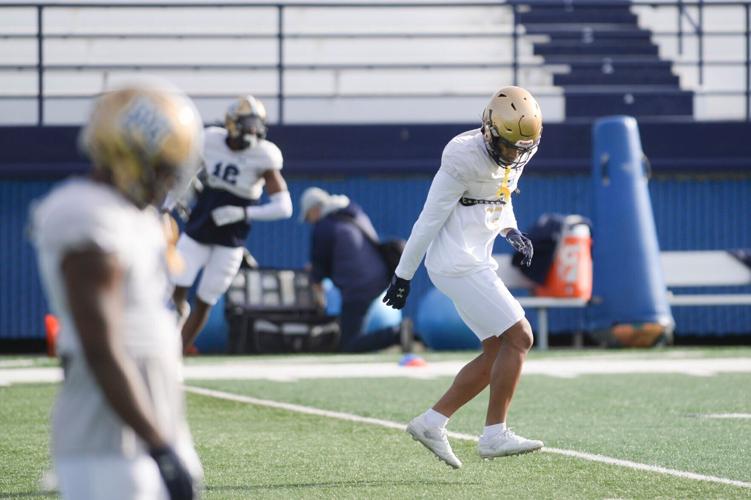 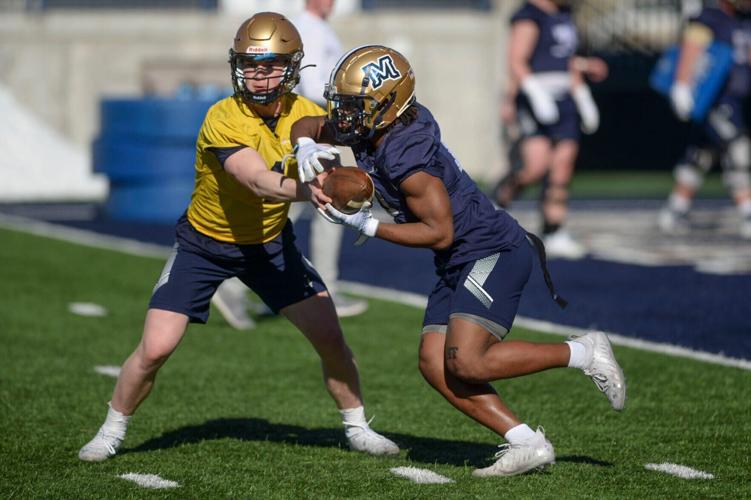 BOZEMAN — In some ways, it feels like the Montana State football team's season just ended.

“It’s funny because by going that far (in the postseason), you’re not used to the turnaround so quick,” MSU offensive coordinator Taylor Housewright said Tuesday. “I think as coaches we’d rather just practice all year-round and play football.”

Following the 38-10 loss to North Dakota State in the FCS championship game on Jan. 8, the team took one week off before jumping back into workouts. In the relatively short break between the 2021 season, offseason strength and conditioning and spring practice starting this week, MSU has been ready to get back to work.

“I was actually talking to Coach (Brent) Vigen about it yesterday, I hate sitting around,” MSU rising senior safety Jeffrey Manning Jr. said. “So it’s just exciting to get back out here with the guys, running around.”

“Everybody here loves football,” Mellott said. “They wouldn’t be here doing what they’re doing if they didn’t. The less of a break we have, the more excited we are about (getting back out there).”

Saturday’s practice marked the end of the first week of spring ball for MSU. And while all eyes are set on this upcoming season, Mellott and Manning said there isn’t a direct focus on getting back to the FCS title game in Frisco, Texas.

“I feel like that should be a chip on everybody’s shoulder, but that’s not something that we should necessarily look forward to only being the third day in camp,” Manning said. “But I feel like it stung. It stung in the moment and it stung for sure after. But we’re in 2022 now, a new season. So I feel like we can’t really keep dwelling on that.”

Added Mellott: “If you’re focused on that endpoint, you’re never going to be ready at that starting point. So our mind isn’t on that game from the past year or only on that game for the upcoming year.”

After injuring his ankle in the first quarter of the FCS championship game, Mellott underwent surgery this offseason. And after a week of spring practice, he said his ankle is “feeling great” so far.

“My ankle, I’ve got nothing to worry about with it,” Mellott said. “I did a bunch of PT with it. I’ve been running around. I haven’t had the most amount of time to actually get into shape and strengthen up all those muscles that I wasn’t able to use for a couple of weeks there.

To help that along, Vigen said the Bobcats are focusing on Mellott’s passing more than his running for the time being.

“A week into it I like where he’s at,” Vigen said. “His grasp of all that we’re doing, while it was good back in December, he’s taken that to another level.”

It’s also helped having some competition in the backfield. Wyoming transfer Sean Chambers, redshirt freshman Sean Austin and freshman Jordan Reed have all been taking reps at quarterback this week. Mellott said he’s been learning plenty from them, especially Chambers, and that they’re all focused on improving the group as a whole.

“I don’t think it’s good for anybody to sit complacent,” Mellott said. “Obviously I wasn’t planning on doing that even if (Chambers) wouldn’t have been here. In every position that’s what we’re doing, double repping, getting a ton of reps in. Everybody’s improving and we’re developing that depth — exactly what we’ve been focusing on.”

Vigen said he’s been especially proud of how Chambers has integrated himself into the team — all while learning an entirely new offense — and how Reed and Austin have stepped up this week.

“We’re getting reps, and that’s the key to how we’re doing things,” Vigen said. “That position as much as any of them, those guys need to learn by doing. And you can see some real progress in all of them this week.”

One thing Vigen has asked of his veteran players is to continue stepping into more prominent leadership positions.

That starts with the 14 players on the Cats Council, the Bobcats’ leadership group that includes both Mellott and Manning.

Manning said that while he tends to lead by example, a point of emphasis this spring is to be more of a vocal leader for his teammates.

“I feel like the biggest thing is stepping into that leader role because now I’m officially the old guy in the room,” Manning said. “Which is crazy to me. So I feel like that’s something I really need to focus on.”

Mellott also said he’s working to become a more vocal leader. For example, that means encouraging both the MSU offensive and defensive linemen while the quarterbacks get extra reps in practice — especially with so few subs.

“If it wasn’t for them, we wouldn’t be able to get all these reps,” Mellott said. “And just going and supporting those guys, because getting however many reps — 40, 60, 80 — in a practice that’s more than some games. And we do it three times a week. So obviously just supporting those guys, helping them get through and compete with one another and be vocal about it.”

From a team perspective, Manning said the goal for the 2022 MSU team is maintain the camaraderie that propelled it throughout last season.

“Last year I feel like the locker room was really a cohesive unit,” Manning said. “I feel like we were always together. I feel like that was the biggest thing as a leadership group this year, we’re just trying to keep that same tight-knit mentality that we had last year. And then carry it over into this year.”

Players stepping up to add depth

MSU is notably without a few players this spring due to injury, including linebacker Callahan O'Reilly, defensive back Ty Okada and running back Isaiah Ifanse.

In their stead, Vigen has seen several players step up to both add depth and take advantage of more reps in practice. That includes linebacker Nolan Askelson and defensive backs Eric Zambrano and Air Force transfer Dru Polidore.

Vigen also pointed out how well the running back group is doing thus far in practice.

"Elijah Elliott, DeMareus Hosey in particular, Lane Sumner as well, are guys that are getting, not necessarily a different workload," Vigen said, "but just, ‘Hey, Isaiah’s out right now and that position of backup running back was a bit of a revolving door last year.' And we need to solidify that. Spring’s really when you’ve got to do that.”

After a run to the FCS championship game in 2021, the Bobcats held their spring practices that culminated in their Sonny Holland scrimmage Apr…