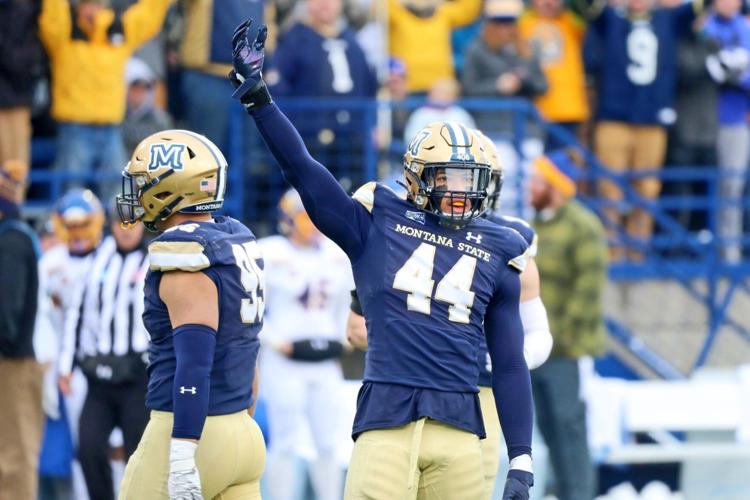 Montana State defensive end Daniel Hardy pumps up the crowd in an FCS semifinal game against South Dakota State on Dec. 18, 2021 at Bobcat Stadium in Bozeman. 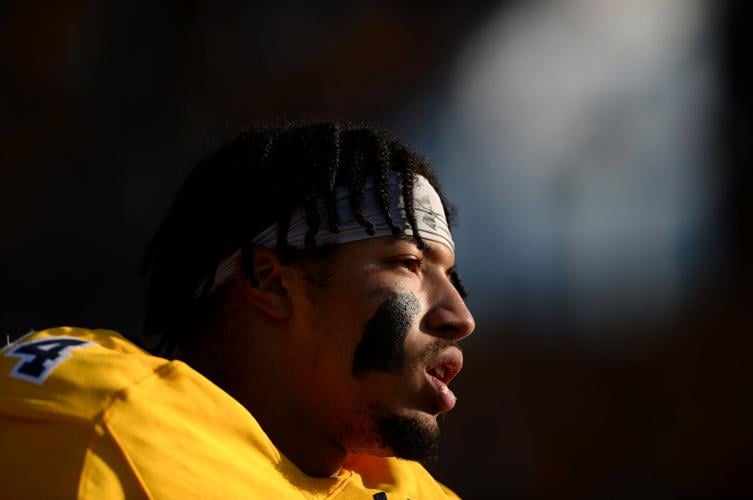 Montana's Daniel Hardy prepares to take the field on Saturday, Sept. 11, 2021, at Bobcat Stadium in Bozeman.

BOZEMAN — In three years, Daniel Hardy went from a raw backup to an NFL Draft pick.

Hardy transferred to Montana State from College of the Siskiyous (California) in 2018 and came off the bench that season. The Beaverton, Oregon, native started four games for the Bobcats in 2019 as an injury replacement for two-way star Troy Andersen, but the bulk of his production came on special teams.

Coming off the 2020 pandemic-canceled season, Hardy bulked up to about 240 pounds and became an All-American defensive end, threatening program records with 24 ½ tackles for loss and 16 ½ sacks while remaining a force on kickoff coverage for the Football Championship Subdivision runner-up. He followed his excellent season up with strong showings at the NFLPA Collegiate Bowl and MSU’s Pro Day.

On Saturday, the defending Super Bowl-champion Los Angeles Rams selected Hardy in the seventh round of the NFL Draft. That pick combined with the second-round selection Atlanta used on Andersen marked the first time two Bobcats were chosen in the first seven rounds of the same draft.

Hardy spoke with 406mtsports.com from Oregon on Saturday night. Among the topics he discussed: McCutcheon, Andersen, his plan to play outside linebacker in the NFL, joining a team with All-Pro defensive lineman Aaron Donald and wide receiver Cooper Kupp and his father, Wilbert, who passed away when Hardy played at Siskiyous.

NOTE: This Q&A has been edited for brevity and clarity.

406: First of all, how would you sum up this day and being drafted?

DH: Honestly, it was a roller coaster. Sitting through watching picks go all day, and then it goes from the fourth (round) to the fifth to the sixth and then all the way into the seventh, and I'm sitting there and I have no idea if I'm going to get picked or not. I had a couple teams calling with free agent offers and things like that, and the pressure and anticipation were all building up. And then finally, I got a call from a number in California, and it was the one we've been waiting on this whole weekend. So, very grateful.

DH: I talked to like five different people on that phone call, so I'm not sure whose phone it was. But it was just a great opportunity, great experience. My whole family was here. They went nuts. It was very special, a very special day.

406: That call came, what, a minute, a couple minutes, before (your selection) showed up on the TV?

DH: Yep. I got to talk to pretty much everybody. Sounded like I was talking to everybody in the draft house. And then my family, I told them I was going to LA, we all went crazy, and then everybody was like, ‘Hey, look on the TV.’ And we were on the TV and everybody was looking. Just seeing my name up there was crazy. It's stuff you dream about when you're a little kid throwing a football in the backyard. It’s dreams coming true. It's amazing.

(UPDATE: Rams general manager Les Snead and defensive coordinator Raheem Morris were also on the call, as the Rams showed in a video released Sunday afternoon)

"We wanted to end the chase and just go out there and get you, man. We're fired up about that."

406: An obvious question too is, they're the defending Super Bowl champions. Is that kind of the cherry on top of this moment for you?

DH: Absolutely, because not only just am I getting drafted by a team, but it's a team that knows how to win at the highest level of football. They have a bunch of prolific pass rushers that I have the opportunity to learn from. It’s just a blessing and an amazing opportunity.

DH: Definitely Aaron Donald. The guy’s a pass rush guru. We watched his film at Montana State, and (defensive line) coach (Shawn) Howe breaks his tape down all the time. After idolizing that guy and trying to copy some of the things that he's done, it’s going to be really dope to actually work with him.

406: Having Cooper Kupp on the roster — a former Big Sky guy (at Eastern Washington) who is now one of the best players in the league — I have to imagine that that provides some encouragement.

DH: Absolutely. Obviously being a smaller school guy, I don't know him personally, but I would have to imagine that he plays with a chip on his shoulder the same way that I do. It's going to be huge. And Lance McCutcheon being there too with the Rams is going to be amazing. Honestly, I don't think I could have written this up better. It's just a fantastic opportunity.

406: Have you talked to Lance or at least texted with him since he signed?

DH: Yeah, just a quick exchange. We're both super excited. We're both with our families right now, but we just let each other know how excited we were to be on the same team again and be in the same city. It’s great. Being a part of the Bobcats is a lifelong relationship. At the end of your senior season, you wish you had just one more game that you could play with your brothers. So getting that opportunity is pretty special. Unless you're from one of those bigger schools, I don't know too many people who get that second chance to play with their brothers like that.

406: How special is that to set that (MSU draft) history, and then specifically with Troy to to see him go so high?

DH: Honestly, to even be mentioned in the same sentence as making history with Troy Andersen is pretty special. As you know and everybody knows, he's a legend in Montana, and he'll have a fantastic career in the NFL. Like I said with Lance, you just want one more opportunity with your brothers, so getting to do that and make history with him was pretty great.

406: When did this moment, when did being drafted, feel like a reality?

DH: It still doesn't feel real. It’s so surreal. It’s a quick change, and everything's going to change from here on out. Just realizing that I really get to play football as a job and as my career, it's amazing.

406: Did you know linebacker was the most likely destination for you at the next level, or were you thinking, hoping, to stay at D-end for a little while after the season ended?

DH: I had heard a few different things from different teams, depending on the system. Everywhere I was (potentially) going, I was going to have to end up pass rushing, so I knew I wouldn't be too far away from having my hand in the dirt or getting after the quarterback. Just being willing to be versatile and adapt to the situation.

406: McVay mentioned in his press conference that they're really excited to have you as a special teams guy. How much pride are you going to take — especially that kickoff mentality that you had your whole career at MSU — to the Rams?

DH: A ton. (Former MSU special teams) coach BJ (Robertson), (former MSU head) coach (Jeff) Choate, when they were here, that was a big thing that they taught us: if you want a bigger, better job, you’ve got to do a great job with the one you already have. If that's my role when I come in, no problem at all. Let’s go knock some heads on kickoffs, block some punts, whatever it is that needs to get done. I'm here to fill a role and work my way up on the team.

406: I capped my story about you getting drafted with a quote from you about your dad and how much he meant to you. You said you wish he could be here to see all these things. How could you sum up how important he's been for you getting from where you were a few years ago to where you are now?

DH: The utmost importance. Like you guys know from the previous interviews I've done, every time I step on a football field, every time I put on pads, my helmet, I lace up my cleats, I'm playing for him, playing for this family, something bigger than me. We took a minute to remember him today, and it was an emotional moment for our family because my dad was a huge, huge part of our family. He held us together. Losing him was a big loss for us. All of us wishing he was here and feeling his spirit and knowing he's looking down on us and smiling and going crazy with the rest of the family, it was pretty special.

"Certainly his measurables are off the charts, but you don’t take guys just on measurables. The guy can play.” Falcons head coach Arthur Smith on Troy Andersen

'He's a hometown hero': Dillon watches as Troy Andersen is drafted by the Atlanta Falcons

All eyes were on Dillon's Troy Andersen as fans in his hometown watched to see what NFL team would draft the former Bobcats and Beavers star.

Andersen is the first second-round draft pick in MSU history.

The offensive tackle has four years of eligibility left.

Brown was one of three Bobcats to announce portal entries on Tuesday.

“His ability to see things and diagnose things and play fast has showed up again." MSU coach Brent Vigen

“It sounded like a good idea, and I knew the story. There'd been articles written from time to time, but no one had ever put out a book on it." Paul Wylie

Montana State defensive end Daniel Hardy pumps up the crowd in an FCS semifinal game against South Dakota State on Dec. 18, 2021 at Bobcat Stadium in Bozeman. 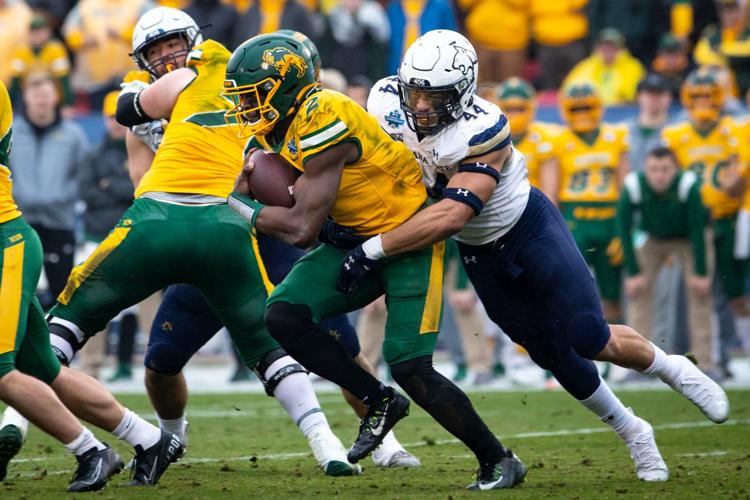 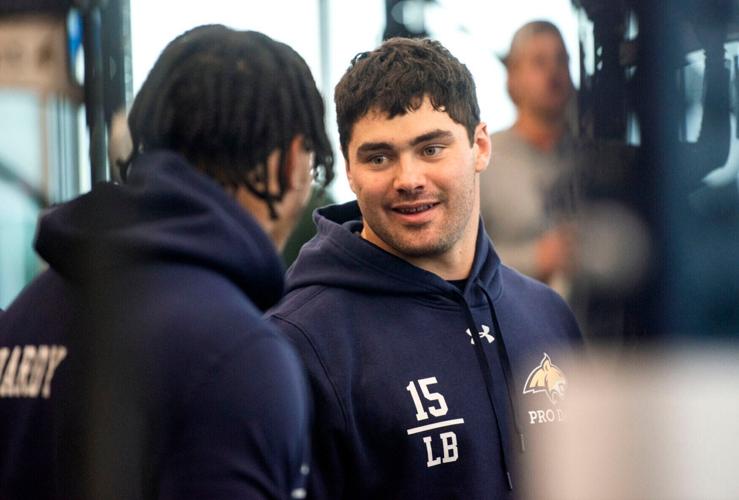 Troy Andersen talks with Daniel Hardy during Montana State's Pro Day on Monday at the Bobcat Athletic Complex in Bozeman.

Montana's Daniel Hardy prepares to take the field on Saturday, Sept. 11, 2021, at Bobcat Stadium in Bozeman.