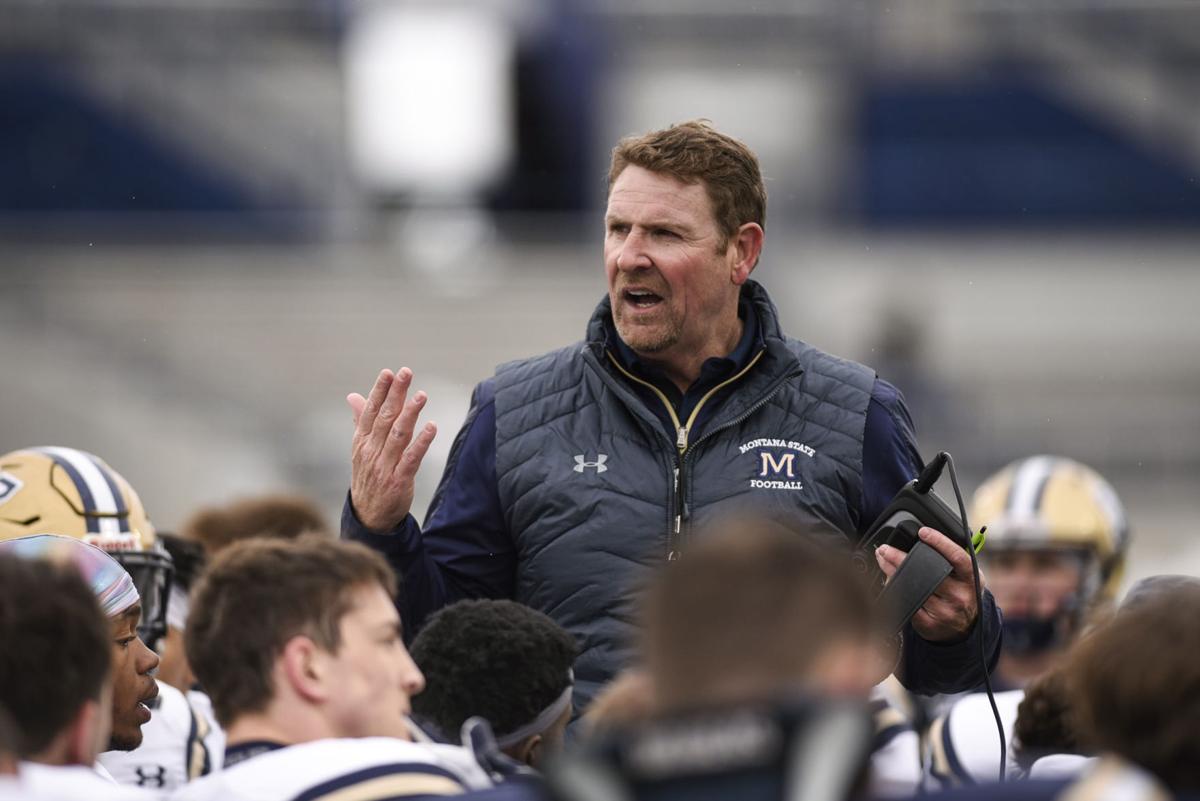 Montana State head coach Jeff Choate talks to his team after the Sunny Holland Scrimmage on April 6, 2019 at Bobcat Stadium.. 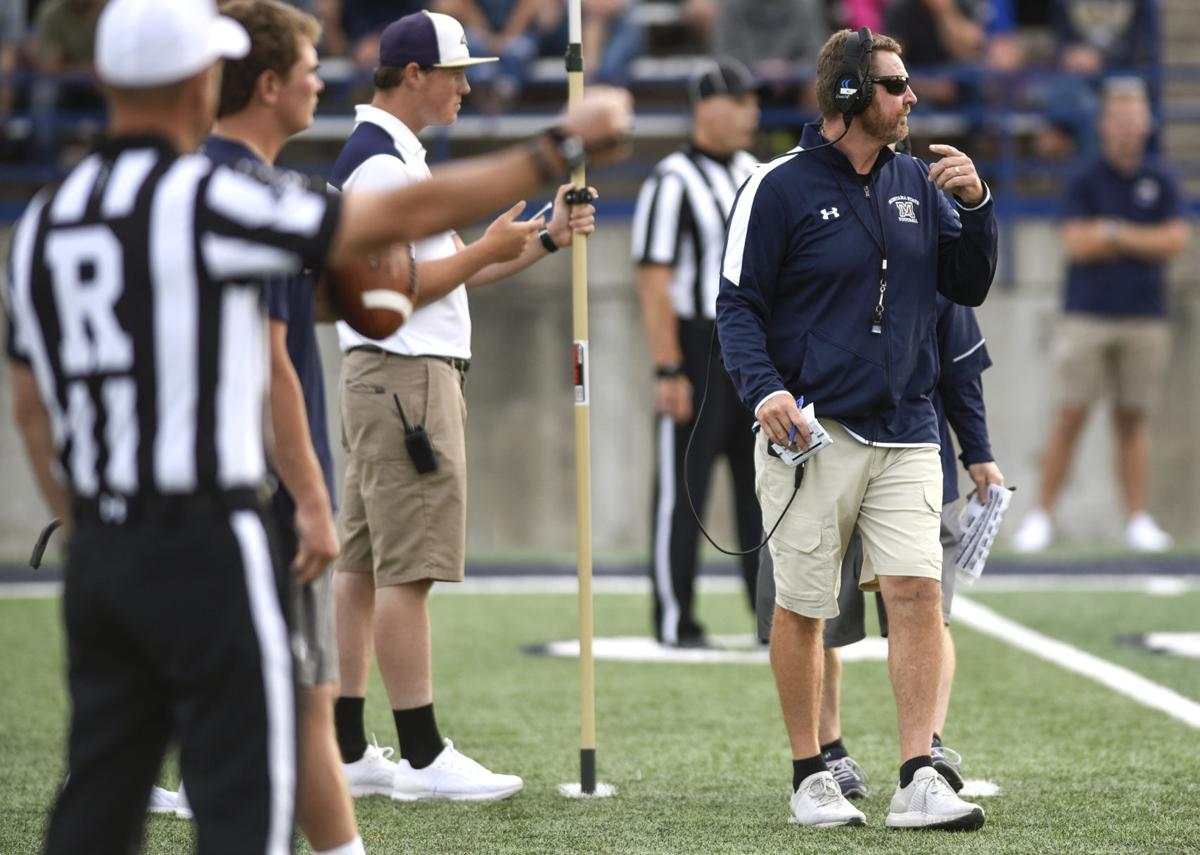 BOZEMAN — In his office at Brick Breeden Fieldhouse, Jeff Choate hung on his wall a message about the importance of truth.

The Montana State head football coach thought about that when Bruce Feldman of The Athletic contacted him. Feldman had heard from frustrated college coaches about the NCAA’s decision-making during the coronavirus pandemic, but none were willing to speak on the record.

Choate didn’t back down. He claimed the commissioners and presidents of the Power 5 conferences “backed the NCAA into a corner” and that “football only matters if you have money.” He added the “real tragedy here is we could not operate together in the best interest of our kids.”

“That’s who I am,” Choate told local media. “If I’m going to say something, I’m going to go on the record and say it. I’m not going to hide anything behind anything. I’m not scared to lose my job here at Montana State. I’m not scared of somebody not hiring me down the road, whoever would potentially hire me in the future. They know who I am so I felt like that was the truth. Somebody’s got to say it, right?”

The NCAA announced Thursday it would not hold any fall championships because of the pandemic. For the Big Sky, all of its fall seasons were moved to the spring because of coronavirus concerns. And Choate provided plenty more insight on the possible issues college sports will face in the future.

Eligibility, Choate thought, would create the most discussion. Earlier this week, the NCAA Division I Council recommended provisions for fall sport athletes who compete and then opt out of future participation or have a season cut short due to COVID-19. The recommendations included an extension of athletes’ five-year period of eligibility or an additional season if they participate in 50% or less of the maximum number of competitions allowed in each sport.

But Choate noted this wouldn’t be “a one-year fix.” He pointed out allowed roster size will have to be expanded, then perhaps incrementally decreased the following years, to accommodate for incoming freshmen.

For example, the Bobcats may have to, at one point, make room for 44 players who are all on their last seasons of eligibility.

Division I football programs may lose additional standout players anyway if seasons take place in the spring so they can prepare for the NFL Draft. However, Choate sees that as “a nonissue.” The NFL will adjust, he believes, especially if all of the Power 5 conferences try to compete in the spring.

Scholarship limits could also pose as obstacles. Choate wondered how much money MSU could offer to players and how many players could receive scholarships if the roster size grows.

“There’s obviously going to be back-end problems,” he said, “and that’s going to take some time to weed that out.”

As Division I conferences around the country began to cancel games, FBS players united on social media in hopes of ensuring they aren’t left out of important decisions. This left open the possibility of a union. Some, like a group from the Pac-12, have threatened mass opt-outs if concerns about coronavirus protocols, racial injustice and economic rights are not addressed.

Choate thinks this could affect the FCS and other levels. But he’s often called MSU a “player-run program,” implying that his players already have a prominent voice in the direction of the team.

He thinks this leads to less issues. However, he knows his players have different beliefs on how to handle the coronavirus pandemic and will be vocal about it in different ways. Choate said he’s fine with that, adding that a healthy discourse is “what we need.”

“I just think it’s all about them feeling empowered,” he said.

Choate also lamented the divide between different levels of college football. For example, he said the difference between an FBS league like the Mid-American Conference and an FCS conference like the Big Sky “are literally light years apart so for us to operate under the same kind of loose guidelines doesn’t make sense.”

He wondered if levels of college football will split off depending on financial resources.

“The model that we use now for college football is not going to work anymore,” Choate said. “Because you’re going to have name, image and likeness, transfer rules, all these things. (COVID-19) is no fun for anybody, and it’s really created ... a mess.”

Choate pointed out some schools in the Big Sky like Eastern Washington are already financially struggling. Portland State often schedules two FBS games per year for the payouts, and moving the football season to the spring may take that income away.

Many teams tried to step up to Division I to “chase the dollar,” Choate said, knowing they could schedule those guarantee games. The MSU coach worries the effects of the pandemic may force some Big Sky programs to either bump down to Division II or cut football all together.

“On some of those campuses, they don’t need a lot of reasoning, and so this may be enough,” Choate said. “It’s going to change the landscape of the league.”

Choate reiterated his frustration with the NCAA on Monday. He doesn’t want the governing bodies of college sports only worried about the FBS or Power 5, though they make more money. He wants the concerns of lower levels to be addressed as well so they aren’t forced to slash programs.

He pointed out many players in lower levels participate in college sports with the understanding that their careers won’t reach professional leagues. Choate, for example, played at Montana Western and earned a degree. This led him to MSU.

He emphasized that the education tied to athletics is vital.

Knowing the high-level athletes he works with, Jeff Choate joked that he still didn’t think his team would perform well.

The possibility of a spring FCS season is closer to becoming a reality.

After receiving more early commitments this year than normal, Jeff Choate said the Bobcats can’t accept many more because they don’t know what their roster size will look like in the future.

Camila Noe won the Big Sky Conference cross country title last fall as a freshman. The Bozeman High graduate is having to shift her attentions this fall.

At 6-foot-10, Duffy grew as a player in the MSU men's basketball program. He lost his life in August fighting an Oregon wildfire.

Montana State head coach Jeff Choate talks to his team after the Sunny Holland Scrimmage on April 6, 2019 at Bobcat Stadium..