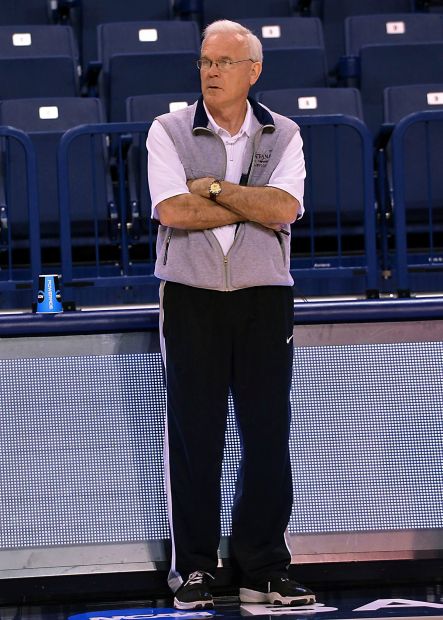 Robin Selvig has 799 wins in 1,054 games over 36 seasons as the Lady Griz coach. He is ninth on the all-time women’s college basketball wins list.

MISSOULA — If Montana Lady Griz coach Robin Selvig was overly worried about getting his 800th win, he’d have cause to complain to his schedule maker.

The next opponent, the University of Portland, looks pretty tough.

Selvig, who has 799 wins in 35-plus years coaching women’s basketball at UM, is mostly concerned with how to handle the talented Pilots tonight at UM’s Dahlberg Arena.

Portland is 2-1 after taking a 91-77 win from the Huskies at the University of Washington on Friday, and beat Big Sky Conference favorite Eastern Washington 68-65 on Nov. 8.

Montana is picked to finish second in the Big Sky.

“They’ve got a good team,” Selvig said of the Pilots, who have a veteran coach in Jim Sollars. “Jim has most everybody back and then he has this (Cassandra) Brown girl that was redshirting. She’s a really good player.

It’s been a storied career for Selvig, the Outlook native who traces this job back to his first teaching job in Plentywood: He thought he was going to guide the Plentywood boys, but when legendary coach Zoonie McLean stayed on, Selvig was asked to take over the fledgling girls program.

Selvig felt that, in turn, helped him land the Lady Griz position in 1978.

But he groans at the mention of 800. Just eight women’s coaches have reached that milestone, and six are still coaching.

“I won’t be thinking about that, believe me,” said the 61-year-old Selvig. “But whatever. I hope it happens soon.

“It’s a nice thing, and it’ll be nice to look back on, but I don’t want this team thinking anything about it. It’s more about them getting the win and getting better.”

Legendary Tennessee coach Pat Summitt, who coached the Lady Vols from 1974 to 2012, is the

all-time leader in women’s basketball coaching wins with 1,098. Selvig is 9th on the all-time list and all but two — Summitt and former Texas coach Jody Conradt — are still active.

Portland has had several excellent teams and has a long history with UM. Last season was the first since 1994-95 that the Pilots and Lady Griz did not square off; Portland dropped Montana when BYU became the newest member of the West Coast Conference.

A year later, the Pilots are back with 5-foot-10 guards Kari Luttinen and Alexis Byrd, 5-8 guard Jasmine Wooten and 6-2 forwards Cassandra Thompson and Amy Pupa.

Brown, injured last season, comes off the bench to score 14 points a game. Thompson is scoring at an 8.5-point clip and led the team in rebounding with 25 through the first two games.

“They’re a good transition team for sure,” Selvig added. “They like to push it.”

Montana is coming off a 76-49 win over Montana State Northern that went better than Selvig supposed.

“I got myself all worked up over that, because they’d just come off playing Wyoming tough,” Selvig said of the NAIA Skylights. “I really thought the first half we played well. We didn’t shoot it for the whole game, but we did shoot it in the first half.”

The Lady Griz shot 49 percent while building a 49-20 halftime lead. They tailed off from there, though senior forward Jordan Sullivan and junior guard Kellie Cole were at 50 percent, and senior guard Torry Hill wasn’t far behind.

True freshman center Alycia Sims had the nicest impact off the bench, with seven points and 10 rebounds.

This game should give a strong indication on a tighter rotation for the Lady Griz. Against a seasoned opponent boasting four returning starters, it’s hard to imagine all 13 Montana players scoring, as they did against MSU Northern.

“I’m sure there’s not going to be that many players in this game,” Selvig said.

Sollars adds to the background for this game: A longtime acquaintance of Selvig, he has 552 wins in 37-plus years as coach, including 375 at Portland.

Adding to the atmosphere for tonight’s 7 p.m. tip-off should be a large crowd, hoping to see Selvig reach another landmark before the Lady Griz — after an eight-day break — play their next game on the road, at Denver.

Detroit Lions embrace being underdogs in 2021

What will it take for the Giants to take down the Dodgers?

What will it take for the Giants to take down the Dodgers?

What impacted the line move on the Dodgers?

What impacted the line move on the Dodgers?

Robin Selvig has 799 wins in 1,054 games over 36 seasons as the Lady Griz coach. He is ninth on the all-time women’s college basketball wins list.