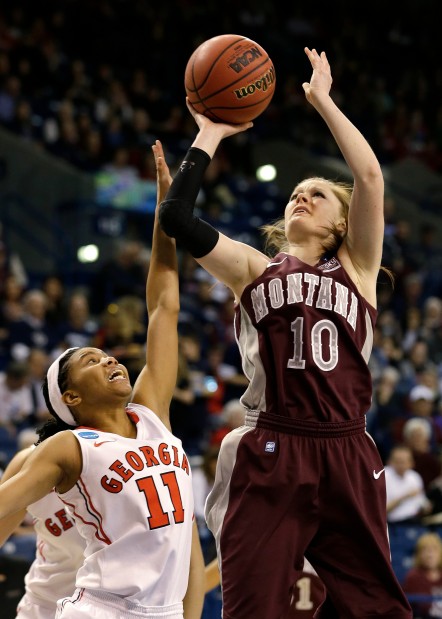 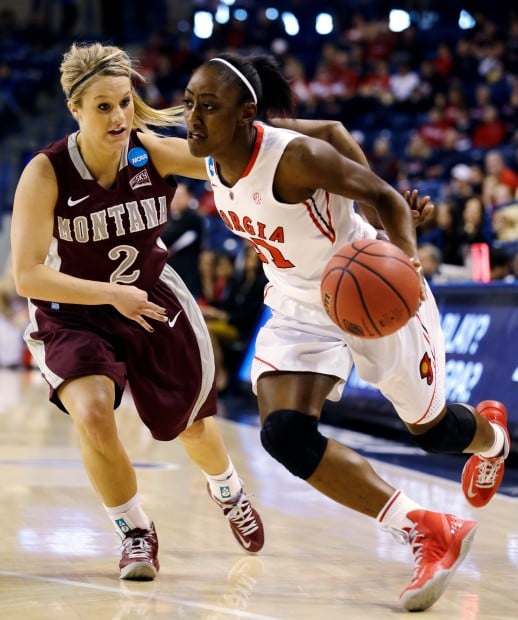 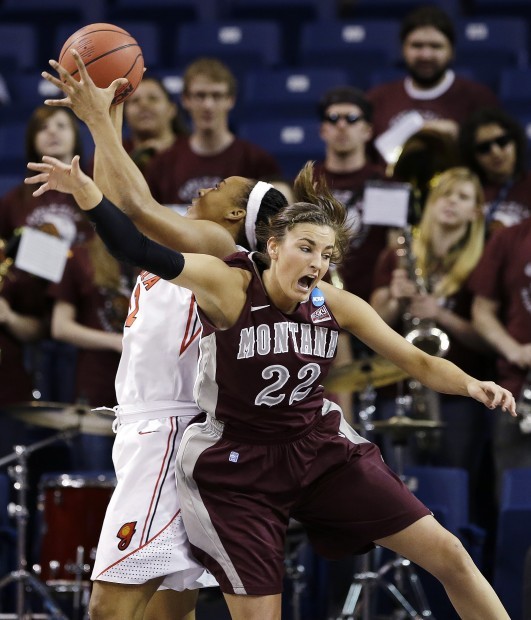 Montana's Katie Baker (22) collides with Georgia's Jasmine Hassell in the first half during a first-round game in the women's NCAA college basketball tournament in Spokane, Wash., Saturday, March 23, 2013.

Montana's Katie Baker (22) collides with Georgia's Jasmine Hassell in the first half during a first-round game in the women's NCAA college basketball tournament in Spokane, Wash., Saturday, March 23, 2013.

SPOKANE — With 14 minutes to play in Saturday’s game, the Montana women’s basketball team had heavily-favored Georgia shaking in its sneakers.

The partisan Lady Griz crowd at McCarthey Athletic Center roared with chants of encouragement, sensing a potential NCAA tournament upset in the works. The 14th-ranked Bulldogs saw it another way, seizing control on both ends in a 70-50 win before an announced crowd of 5,674.

For Montana (24-8) it marked the end of a stellar season that included a Big Sky Conference regular season and tournament title. It also marked the final game for seniors Katie Baker, Kenzie De Boer, Alyssa Smith and Ali Hurley.

“We got a lot of great looks and they just didn’t fall for us,” said Smith of the game defining statistic — Montana’s 29.3 percent shooting from the floor (17 for 58).

“That’s frustrating, because who knows? On any other night sometimes those shots do fall for us. But (Georgia) applied a lot of pressure. They are an athletic team and they are quick. It’s tough to play against and it kind of gets you out of sorts sometimes.”

Georgia’s frontcourt hurt Montana most of all, keying a gaudy 38-12 advantage in points in the paint. Forwards Jasmine Hassell and Shacobia Barbee, whose impressive blend of strength and quickness was too much for the Lady Griz to handle, combined for 29 points and 11 rebounds.

“I mean, it was a different game down there in the post,” said Baker, who had the unenviable task of guarding the physically-imposing Hassell.

“It’s very physical. I liked it actually, getting able to battle with such great, outstanding SEC posts down there. But it’s different. They are big.”

The fact that 13th-seeded Montana trailed by just a bucket with 14 minutes to play was surprising considering its start. Fourth-seeded Georgia (26-6) exploded out of the chute, hitting 7 of 10 shots to take a 15-4 lead on their jittery opponent.

But much in the same way they have all season, Montana’s reserves provided a lift. Maggie Rickman and Hurley hit buckets to help turn the tide. Then Torry Hill hit a 3-pointer and Hurley canned a pair of free throws to cut the Lady Griz deficit to 19-13 with 8:08 left in the first half.

Hill, who paced Montana with 11 points and three assists, hit two more 3-balls before the break. Georgia kept a cushion thanks to nine points by Barbee and eight by Hassell, but its 32-25 halftime lead was cause for concern.

“Allowing as many threes as we did — you know, they were very good,” Bulldogs coach Andy Landers said of Montana. “You have to give Montana credit for it. They were very good at taking advantage of us being undisciplined.

“At times we left our man, chased someone else, and almost every time they came back and found the open man and knocked down a three.”

Smith and Jordan Sullivan hit 3-pointers in the first four-plus minutes of the second half in helping Montana pull within two, 38-36. Twice the Lady Griz had a chance to tie the score after that, but one possession resulted in a turnover and another saw Hill miss an attempt just inside the arc.

Georgia recaptured the momentum on a 3-ball by senior Anne Marie Armstrong and never looked back. The Bulldogs converted 10 of 13 shots in a magical 23-7 run that produced a 61-43 lead with just under five minutes to play.

“There were stretches in this game where they had a hard time scoring,” Montana coach Robin Selvig said of Georgia. “They still end up getting 70 because boom, boom, they scored so fast.

Montana’s level of hustle was reflected in its 43-37 edge on the boards. But the Lady Griz committed 20 turnovers, which was out of character but not a total surprise considering they haven’t faced a team as good defensively as Georgia all season.

“They were just bigger, stronger and faster and we’re not used to playing those type of girls,” Hill said.

Regardless of the outcome, it was obvious in Montana’s postgame press conference that the team is proud of its accomplishments in 2012-13.

“I told them, I said you guys made believers out of me,” Selvig said.

NOTES: Smith finished with seven rebounds, sharing game-high honors with Hassell … The Bulldogs shot 53.3 percent in the second half (16 for 30) and 45.9 percent for the game (28 for 61) … Sullivan continued with her stellar March, scoring eight points and grabbing five rebounds … Georgia enjoyed a 22-7 edge in points off turnovers … Montana is 6-20 all-time in the Big Dance … The Bulldogs will play Iowa State on Monday in Spokane.