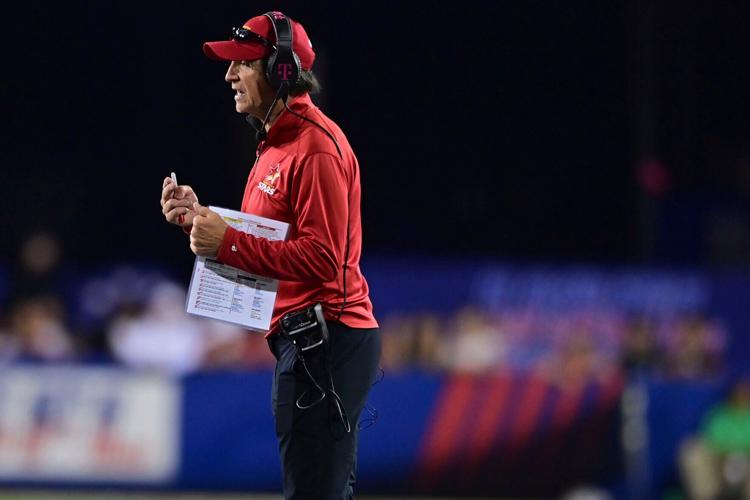 Philadelphia Stars head coach and former Montana Griz quarterback Bart Andrus calls for a two-point conversion during the USFL championship game against the Birmingham Stallions on July 3 in Canton, Ohio. The Stallions won, 33-30. 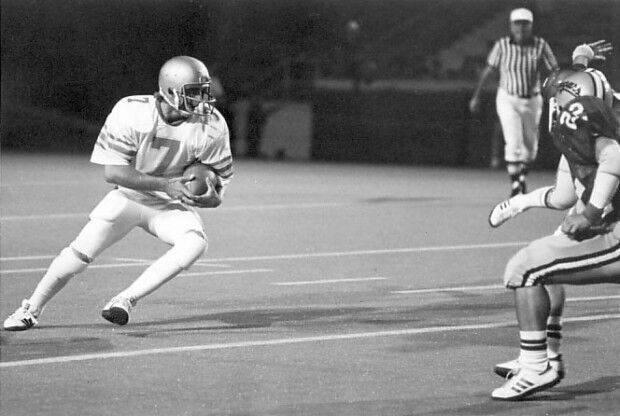 Former Montana Griz quarterback Bart Andrus tries to avoid a tackler in this file photo from the late 1970s.

MISSOULA — Bart Andrus received all of 12 seconds of airtime when the United States Football League unveiled its first four coaches on FS1 in January.

Andrus’ introduction as the head coach of the Philadelphia Stars was limited to the college position he played over 40 years ago at Montana and a couple places he coached. He was the odd man out after Mike Reilly, Kevin Sumlin and Todd Haley had all received praise for between 30 to 60 seconds from Colin Cowherd, the host of sports talk show The Herd.

Andrus was also the odd man out after the season was complete. He was the only one of those four coaches to lead his team to the USFL championship game, where the Stars lost a heartbreaker to the Skip Holtz-coached Birmingham Stallions earlier this month.

“I thoroughly enjoyed it,” Andrus said this week. “Part of my life’s joy is to coach. This is a thing where it’s intense for four months and it’s not a year-round grind like the NFL. It’s doable for me. I’ll do this until they tell me I can’t.”

Andrus’ offense had come to life in the second half of the USFL title game, scoring 14 straight points to take 23-20 lead with 11 minutes to play. The quick-strike offense should be no surprise because Andrus has an acumen as a QB coach. He played quarterback growing up, wrote a QB manual while at UM at the request of coach Larry Donovan, he said, and saw his high school coaches have fun with being ahead of the curve in offensive philosophy.

He wasn’t smart enough to get into Stanford, he joked, so he did his graduate assistantship at BYU, where he learned under LaVell Edwards as the Cougars’ high-flying offense won the 1984 college football national title. He worked with offensive minds Norm Chow, who would be USC’s offensive coordinator during two national title runs, and Mike Holmgren, who would win two Super Bowls coaching QBs and one as a head coach.

Andrus returned to the Treasure State as Montana State’s OC in 1990 and 1991, which he said drew the ire of some at UM. He had more success as the head coach at Rocky Mountain College in 1996, which is among his fondest memories. He was named the NAIA coach of the year when he led a team that was winless the prior four years to a 6-4 record. He did it his way, throwing the ball and trying to score as quick as possible.

“I’ve learned along the way that to have success you have to adjust your demeanor,” he said. “The one thing I felt like I needed to do is develop my own style and not try to emulate somebody.”

Case Cookus wasn’t Andrus’ first choice to play quarterback this season, but the former Northern Arizona signal caller took over the reins when Bryan Scott got injured. He led the Stars to the title game, showing that Big Sky Conference players could excel in the USFL.

Andrus has worked with quarterbacks of varying quality over the years as he’s made stops in the NFL, CFL, XFL, NCAA Division I and II levels, and JUCO ranks. Among the more well-known players are Steve McNair, Heisman Trophy winners Danny Wuerffel, Troy Smith and Eric Crouch, and Jeremiah Masoli, who’s still playing in the CFL.

In the USFL, Andrus gets some freedom to construct the roster because he’s also the general manager in charge of personnel. It was that way in the XFL, UFL and NFL Europe, where he led the Amsterdam Admirals to the World Bowl XIII title in 2005. No Montana or Montana State players were in the league this season, but Andrus thinks it could be a landing spot for them.

“If a player coming out of Montana didn’t sign with an NFL team, by all means play in the USFL instead of the CFL and play by NFL rules and be seen,” he said. “Down the road, as they expand, you’re going to see more guys from Montana in this league.”

On the way to the title game, Andrus got to face off against coach Jeff Fisher. They’ve known each other since they played together on the same 11-year-old Pop Warner team in California.

Andrus got his first pro coaching job from Fisher with the Tennessee Oilers and Titans, serving as the QB coach when they made it to Super Bowl XXXIV. When he returned to the Titans in 2008, he said Fisher arranged for the team to fly him to Montana three times so he could see his son Travis play football at Kalispell Flathead while catching passes from future NFL QB Brock Osweiler.

This time, Andrus convinced Fisher to join him and coach one of the eight teams, the Michigan Panthers. He’s spent a portion of his coaching career in alternate pro football leagues and wants the USFL to succeed. Bringing in quality coaches is one way to possibly boost those chances.

One guy Andrus couldn’t get to coach was Marty Mornhinweg, who was a freshman at UM in 1980 when the former was a senior. Andrus had transferred from Oregon State to UM in 1978 to play for coach Gene Carlson, who was later replaced by Donovan. Like Andrus, Mornhinweg went on to coach in the NFL and helped coach the Green Bay Packers to a win in Super Bowl XXXI.

Building those types of relationships is a big part of what has kept Andrus in coaching since 1981, when he got his first head coach position at 23 years old at St. Patrick High School in California.

“If you’re not coaching, you start missing being around the players and the other coaches,” he said. “To me, the whole business from my perspective is based on the relationships I developed over the years.”

All anyone seemingly wanted to talk with Andrus about after the championship game was the league’s success in its debut season. The inaugural title contest came down to the final few minutes as Birmingham staged a comeback after Cookus broke his fibula in the fourth quarter. The drama led to an average of 1.52 million viewers and a peak of 1.83 million on FOX, according to Sports Media Watch.

Andrus was disappointed about losing the game, but he can now appreciate what he was part of accomplishing with the relaunched league. The USFL has already announced plans to return in 2023 as network and league executives were encouraged by the outlook after a season that included drones, helmet cams, mic’d-up QBs and three-point conversions after touchdowns.

In other alternate pro leagues, Andrus saw the relaunched XFL make it only five weeks in 2020 before filing for bankruptcy. The United Football League lasted just over three seasons. With NFL Europe, Andrus didn’t feel the hype caught on in the United States.

Like NFL Europe, which the NFL owned, all eight USFL teams are owned by FOX Sports. Regular-season games were played in Birmingham, Alabama, with many coaches and players staying in area hotels, while the playoffs were in Canton, Ohio. The plan for 2023 is to have games in more cities, and Andrus is geeked to be there.

“They’re onto something with their vision for spring football,” he said. “They’ve put together a business model that for the first time I feel comfortable with it being sustainable. I’ve been in other ones that don’t know how they’re going to sustain it and can’t pay coaches and players.

“Then the experience in the championship game, they hit it out of the park. I don’t think anybody in a startup has done what they’ve done.”

In search of home, Minnesota's Eli Gillman found what he was looking for at Montana

Philadelphia Stars head coach and former Montana Griz quarterback Bart Andrus calls for a two-point conversion during the USFL championship game against the Birmingham Stallions on July 3 in Canton, Ohio. The Stallions won, 33-30.

Former Montana Griz quarterback Bart Andrus tries to avoid a tackler in this file photo from the late 1970s.