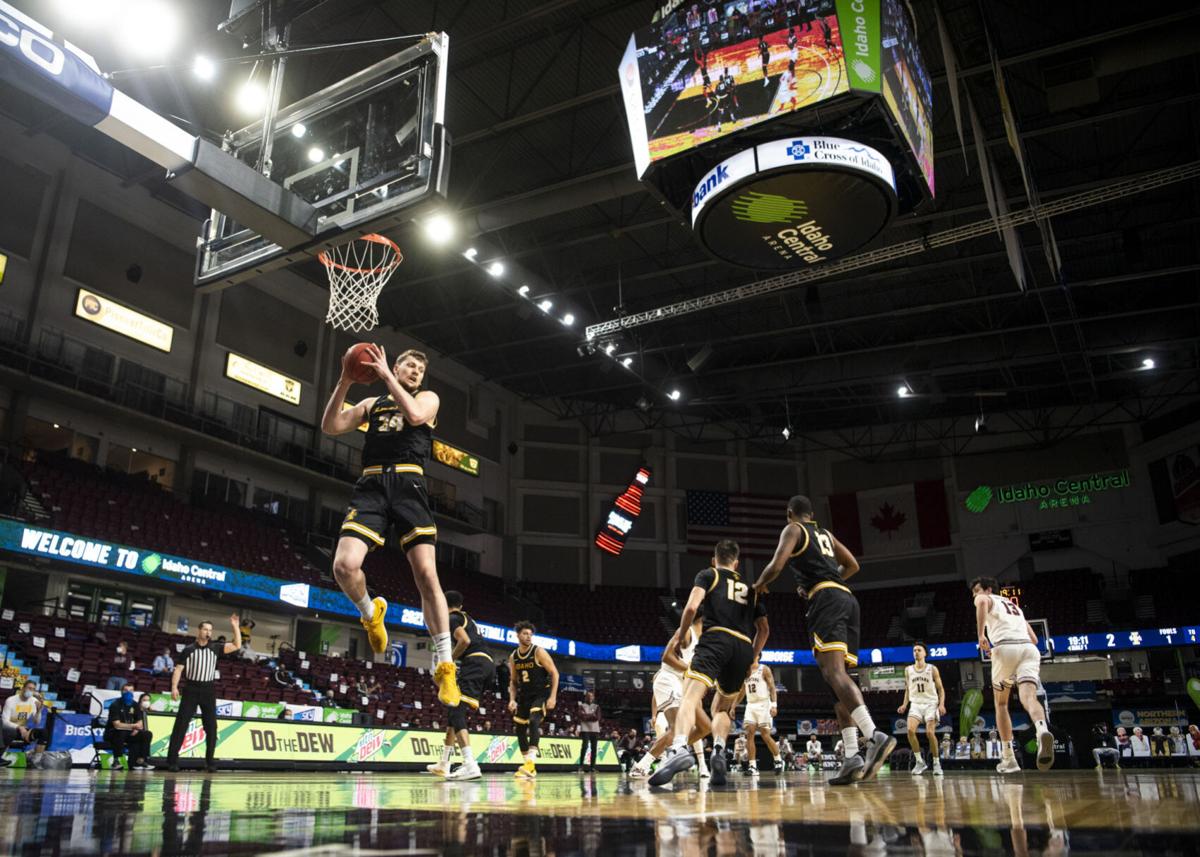 Idaho forward Scott Blakney (34) grabs a rebound during a Big Sky Conference tournament game at Idaho Central Arena on March 10, 2021 in Boise, Idaho. Blakney has since transferred to Montana. 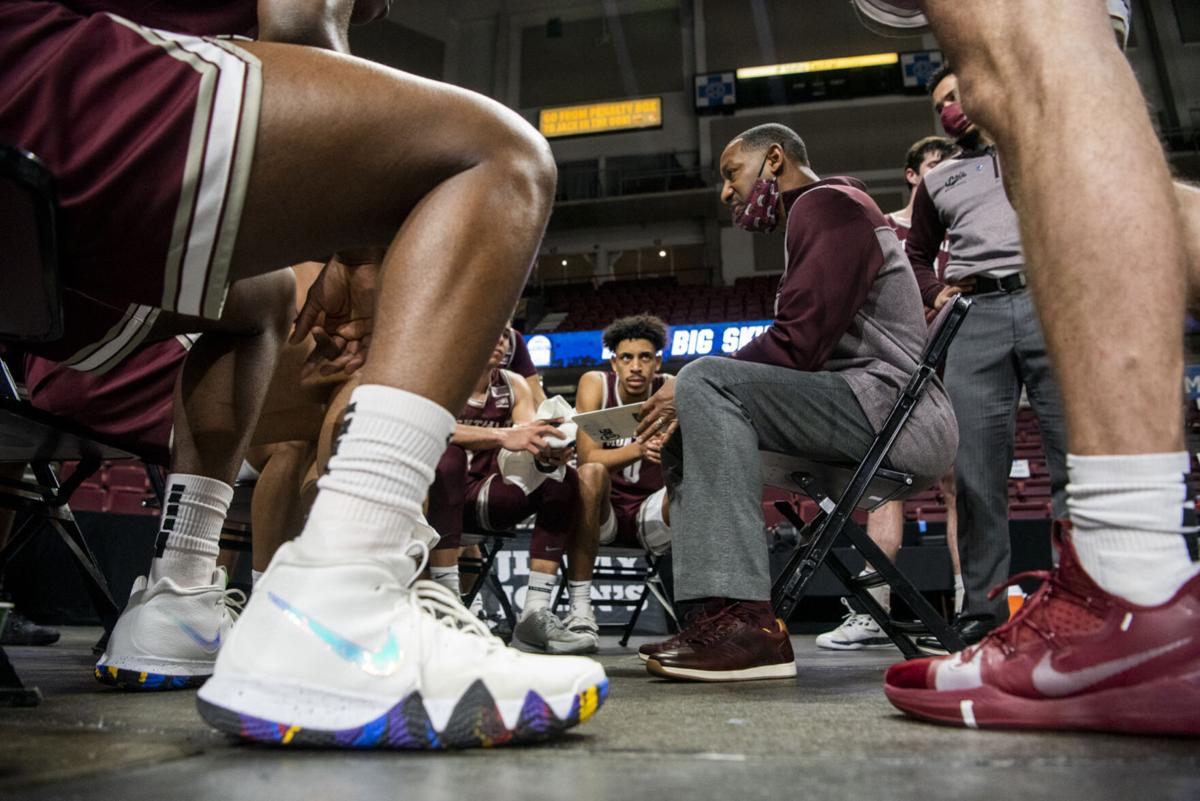 MISSOULA — Getting a bit bigger and a bit more versatile were two of the main goals for Montana men’s hoops coach Travis DeCuire and his coaching staff this offseason.

The team’s most-used lineup according to advanced stats website KenPom.com included four underclassmen and a point guard in his first season with the Griz — but in his third college season. Also, according to KenPom, the Griz ranked 340 out of 347 teams in roster experience at just .97 years — meaning the bulk of their roster had about one year of Division I experience.

The Grizzlies had to play a bit smaller than recent years, too. Kyle Owens, a versatile hybrid forward, was forced to play the five spot at times when Michael Steadman, who was a marquee transfer entering the season for Montana, decided to leave in February.

Mack Anderson and Josh Bannan also saw time at the five, but the two are still a bit undersized along with Owens.

Throw in lineups that included three guards around 6-foot-3 and shorter, which were some of the best lineups the Griz rolled out, DeCuire recognized his team’s need for more size on the perimeter and down low.

The fix? Well, like all other teams right now in college basketball, Montana looked to the transfer portal to fill in some of the gaps with three newcomers — with potential room for a fourth.

There is a balance that DeCuire wants to keep in mind. He believes it is best to build the roster's foundation with high school recruits with strong chemistry and relationships, and use the transfer market to fill in gaps as needed. Some teams build from what DeCuire called the “top down” adding transfers without a solid foundation, a style that he wants to avoid whenever possible.

“The numbers are exploding on us and it's changing the culture of college basketball for a lot of programs,” DeCuire said regarding the transfer market during a Monday interview. “I refuse to be one of them until I absolutely have to. … For us, the transfers fill voids. Center spot, we weren’t very thick, we weren’t very deep. The wing spot, we had no wings, so there’s two scholarships there.”

As of Thursday, the portal has around 1,300 scholarship players in it according to Stadium’s Jeff Goodman. The NCAA board of governors passed the one-time transfer rule — which allows any athlete in any sport to get one free transfer, assuming they have not already transferred — as many expected, opening the gates for more transfers as players have a bit more freedom.

The Griz nabbed an in-conference transfer in former Idaho big Scott Blakney, just as they did before last season — when former Northern Arizona guard, and college hoops journeyman, Cameron Satterwhite transferred within the league to UM before leaving just a few games into the 2020-21 season.

Blakney isn’t the biggest at just 6-foot-8, the same listed height as Owens, but he outweighs the Griz forward by about 30 or so pounds, according to the team sites. At 230 pounds, Blakney gives the Griz a bruiser in the lane they haven’t really had since Jamar Akoh anchored the five in 2018-19.

Blakney may not be a “true” center in the most basic idea of the position, but his ability to fight in the paint should help a thin Grizzlies frontcourt.

“The things we need in the middle he provides: strength, a level of physicality in terms of how he plays and a low-post option offensively,” DeCuire said. “We’ve lacked that consistently the last couple of years. I thought this year was a year that if we had a little more presence, little more meat in the middle, our season would have looked a lot different.”

The backcourt was solid, just young last season for Montana. None of the guards earned any all-league honors, but all showed flashes throughout the year.

Freshmen Robby Beasley and Brandon Whitney both shot north of 35% from behind the 3-point line, with Beasley hitting over 40% of his 3-ball attempts against Division I squads.

But, as noted above, the guards that played the most are all around the same size. So, in come some lengthy guards who can play all over the perimeter.

Montana signed incoming freshman Jonathan Braggs, a 6-foot-3 guard out of basketball power Bishop Gorman in Las Vegas, and junior college transfer Lonnell Martin Jr. out of Otero Junior College in Colorado — his fourth stop during his pre-Div. I career.

Martin, a 6-foot-4 guard, bounced around a bit, going from Grand Blanc High School in Flint, Michigan, to IMG Academy in Florida, then back to Michigan and Oakland Community College before making his way west.

“Versatility is big for us,” DeCuire said. “ … We needed to add size and length to the three-man position — this is the one year we just didn’t have a three. We could get away with it in years past with Mike Oguine because he was the best athlete in the league — he could make things happen and play bigger than he was. We just aren't built like that in our backcourt in terms of our athleticism. It was good for us offensively but not defensively.”

The rest of the Big Sky has been hit pretty hard by outbound transfers.

Montana lost Steadman, Satterwhite and most recently Eddy Egun to the portal, but those losses don’t come close to the impact of others in the Big Sky.

Lance Hartzler covers Griz men's basketball and prep sports for the Missoulian. Follow him on Twitter at @lance_hartz or shoot him an email at Lance.Hartzler@406mtsports.com.

The dismissal of five Lady Griz players — four from Montana — signals the end of not only an era but a formula that Robin Selvig used to build the program into one of the greatest in women's collegiate basketball history.

A Michigan State grad transfer announces his commitment to the Montana football team.

Montana has two of the top three leaders in the women's heptathlon after the first day of the Big Sky outdoor track and field championships.

Montana Grizzlies will be No. 6 seed at Big Sky Conference softball tournament

MISSOULA — Montana couldn't carry over the momentum from its series-opening upset victory over Weber State and will now face an uphill climb at the Big Sky Conference softball tournament.

MISSOULA — Sisters Jordyn and Shelby Schweyen are no longer members of the Montana women's basketball team.

With the spring football season now complete, Montana makes some changes to its future schedules.

Coach Brian Holsinger's recruiting prowess may be just what doctor ordered for the Montana Lady Griz, who have struggled against the best of the Big Sky Conference in recent years.

Montana is one of 42 states that does not use a shot clock for high school hoops.

Idaho forward Scott Blakney (34) grabs a rebound during a Big Sky Conference tournament game at Idaho Central Arena on March 10, 2021 in Boise, Idaho. Blakney has since transferred to Montana.