MISSOULA – Back when Montana Grizzlies football head coach Bobby Hauck was a student at the University of Montana, he struck a friendship with a peer named Toby.

Many years down the road, that familiar name would re-emerge into Hauck’s life. He would welcome his first member of the Fouch family to his football team.

His old friend Toby’s son, Nick, joined the program as a defensive back. Later on, he transitioned from a playing role to a student-assistant role.

“His dad was here in college with Stacy (Hauck’s wife) and I, so we all were friends in college,” Hauck said. “So it was fun having Nick when he got here and he helped us on the coaching aspect of it … and we’ve really enjoyed that family and known them for a long time.”

But maybe his favorite one, at least as of late, has to be the youngest – Nash. He came along shortly after Nick, and he stuck as a hard-hitting defensive presence that’s made a sizeable impact for UM.

Now a junior safety in the Griz secondary, he had large expectations both for himself and from the coaching staff for the 2022 campaign. Hauck anticipated Nash to become an every-week starter, and those wishes turned to reality.

“Through the year it’s been, to a degree, a three-man rotation at the nickel spot and the boundary safety spot and some of those guys have been banged up here and there, but Nash has actually remained the healthiest of the group,” Hauck said.  “So good for him. He’s done a nice job evolving and bringing his level of play up … I think he’s had a really nice year.”

With three key seniors in the secondary – Robby Hauck, Justin Ford and Jayden Dawson – all set to be out of eligibility following the season, he’ll need to kick it up yet another notch in 2023.

In a recent interview with 406mtsports.com, Nash discussed that upcoming transition to senior status, along with more on and off the field topics.

The interview has been edited for clarity and conciseness.

Q: You’ve stayed the healthiest in the secondary unit this season, so is there a trick to that or is that just luck of the draw?

Q: What were your expectations entering the season and do you feel like you’ve met those at this point?

A: I wanted to take on a bigger role than I’ve had in the last two seasons. One thing that I worked on a lot in the last year was being more physical and I’ve kind of embraced that this year and I think I’ve done a pretty good job of that. Especially in the last month or so.

Q: With Justin, Robby and Jayden all leaving, how are you going to approach a leadership role?

A: I’ve learned a lot. I’ve had a lot of great leadership especially in the safety room over the years with Even Epperly, Josh Sandry and Robby Hauck. I’ve kind of started to take it on a little bit this year. Obviously, Robby has been here and he’s that guy and it’s really cool to play with him but also, I’m really excited to take on that leadership role in the safety room next year and it’s going to be fun.

Q: What goes into that? What makes Robby a good leader that you want to carry over yourself?

A: Robby is a real lead-by-example guy. He brings energy every day. Obviously he brings physicality to every game, every practice. It’s easy to follow a guy who really throws it on the line every day so I think that’s the biggest thing I’ve learned from him. You’ve got to bring energy if you want to bring the young guys along with you.

Q: I know your brother was here with you on the team at one point then in a coaching role, what was that like having him here and doing it together?

A: It was cool. So my dad went to school here. He didn’t play football here but to come to school here and have him on the team was nice. It helped me get to know people and made things more comfortable when I was young. Having him as an assistant was cool too, chopping it up about football at home and hanging out and stuff but it was a cool experience.

Q: Your dad going to school here, did that have an influence on your decision to come here?

A: Yeah. When I was deciding where to go, I was spending a lot of time between different schools and Montana was one of my last offers and so I had seen a bunch of other places but I had spent a significant amount of time in Missoula since I was a kid coming to Griz games. We have a really cool picture at my dad’s house of me and my brother and our two best friends when we were really little in the north end zone and then there’s a picture of me in my redshirt freshman year and all of them in the same spot and same pose. I loved it here ever since I was a kid.

Q: This week with the playoffs, how is the playoff approach different than the regular-season approach?

A: We approach everything the same. We’re always going to come out and have the same energy and the same focus. I think the only thing that is a little bit different is the nerves of it because if you lose, you’re done and nobody wants to be done … Coach Coop (Roger Cooper – safeties coach) always says, “Nerves are a good thing. If you’re not nervous, you don’t care.” So I think come Saturday, kind of embrace the nerves a little bit but during the week, try to keep it to a minimum to stay focused.

Q: Now let’s do some fun ones to finish up. I know you play the guitar, when did you get into that and how?

A: I actually didn’t start until the end of my freshman year here. My brother had one, I was bored one day and I picked it up and I barely played for a while. And then COVID hit at the end of my sophomore year and my old roommates hate me for it – well my current roommate Cole Grossman and my old roommate Nick Germer – and they hated me for it because I was really bad but COVID started and I got super into it and I started playing with Gabe Longin who is really good and he really got me into it. He taught me the ropes and I got a lot better playing with him.

Q: What do you play?

A: Recently I’ve been diving into the rock and the bluesy stuff because it’s a little harder and advanced but it’s a little bit frustrating.

Q: Do you have a favorite musician and favorite song?

A: It changes, especially when you play music, it changes all the time. I’d love to be able to one day just rip Stevie Ray Vaughan songs, but that’s pretty difficult. But as of right now, he’s probably what I’m listening to the most just because it’s what I’m interested in learning.

Q: Now a couple random questions. If you could live anywhere in the world, where would it be?

A: Anywhere in the world? That’s a tough question. I don’t know, I really want to learn how to surf and stuff so if I could go be like a beach bum in Australia or something that’d be pretty cool.

Q: What is your dream job?

A: Obviously being a musician would be cool. To be rich and famous and play in front of people all the time would be pretty cool.

Lucas Semb is the Griz football beat writer for the Missoulian. Follow him on Twitter @Lucas_Semb or email him at lucas.semb@406mtsports.com.

The Griz trailed off in the second half as North Dakota State ran away with a berth into the FCS playoff quarterfinals.

Live coverage: Montana Grizzlies visit NDSU in the 2nd round of the FCS playoffs

The Montana Grizzlies (8-4) are visiting the North Dakota State Bison (9-2) in Fargo in the second round of the FCS playoffs.

Being from Canada, Keelan White wasn't given many chances to play college football in America. He took the only opportunity given to him, and the benefit has been mutual.

Heat from the Beat: NDSU beat writer Jeff Kolpack weighs in on this year's Bison

NDSU is an FCS blueblood, but are they as good as they've been in recent years? Bison beat writer Jeff Kolpack weighs in ahead of Saturday's showdown.

Against an upper-echelon opponent like NDSU, the Griz need to dig deep.

When TikTok helped Montana senior kicker Adam Botkin make the team, he decided he wants to help others in his position do the same.

The Griz scored 31 unanswered points to storm back and advance to the second round of the FCS playoffs.

The NDSU Bison go as their offensive line goes, and the Griz will have to give that group some resistance if they want to slow down the run game. 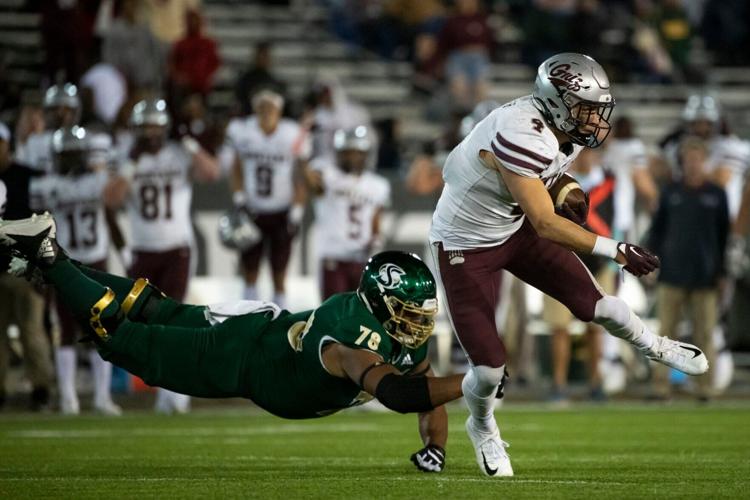 Montana Grizzlies safety Nash Fouch (4) attempts to shake a tackle by Sacramento State Hornets offensive lineman Brandon Weldon (78) after intercepting the ball during the Big Sky Conference football game between the Griz and Sacramento State at Hornet Stadium in Sacramento, California, Saturday, Oct. 22, 2022. Fouch has been instrumental in the Griz secondary this season. 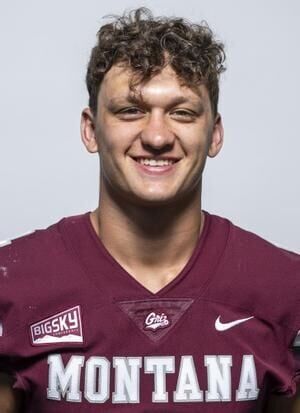