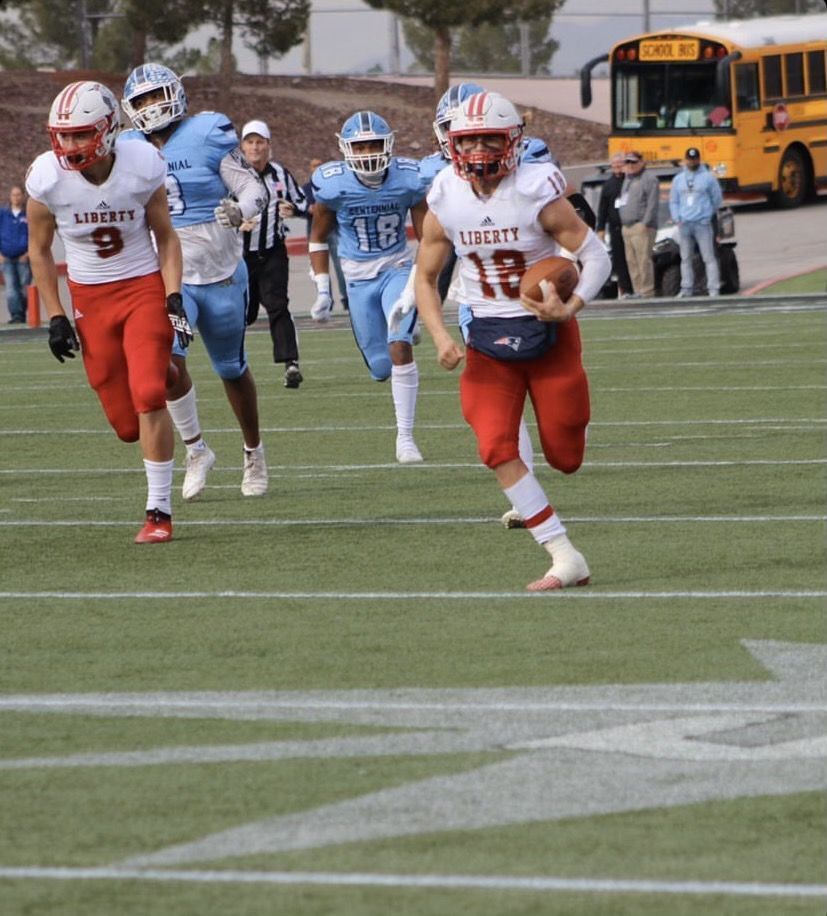 Montana football signee Daniel Britt runs with the ball while playing for Liberty High School during the 2019 season. Britt overcame an injury that broke bones in his face to earn the starting job, lead Liberty to its first state title and get a full-ride scholarship to play for the Griz starting this fall. 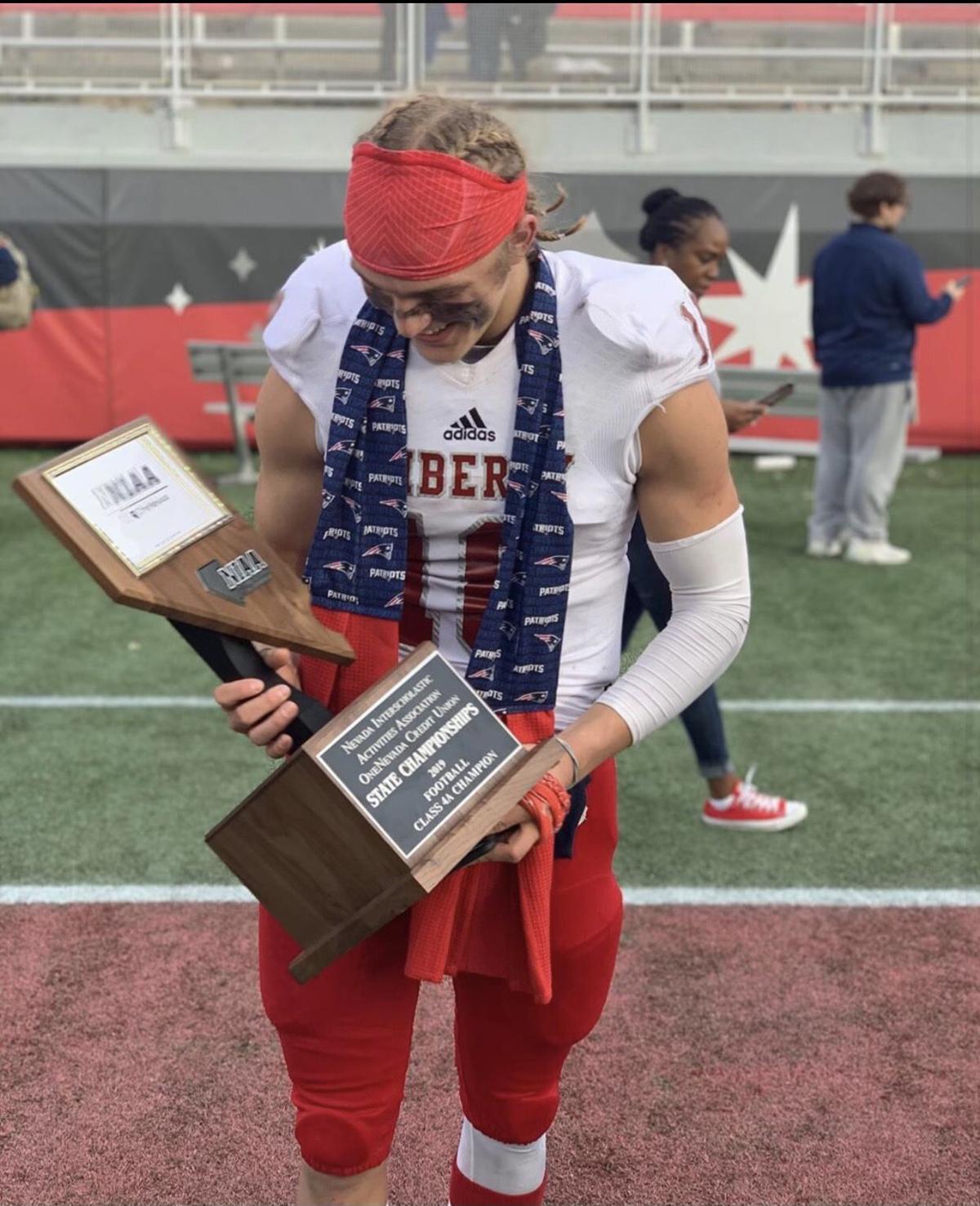 Montana football signee Daniel Britt gazes at the Nevada Class 4A state championship trophy after leading Liberty High School to its first title in 2019. In the playoffs, Britt and Liberty knocked off Bishop Gorman, which had won 10 consecutive state championships. 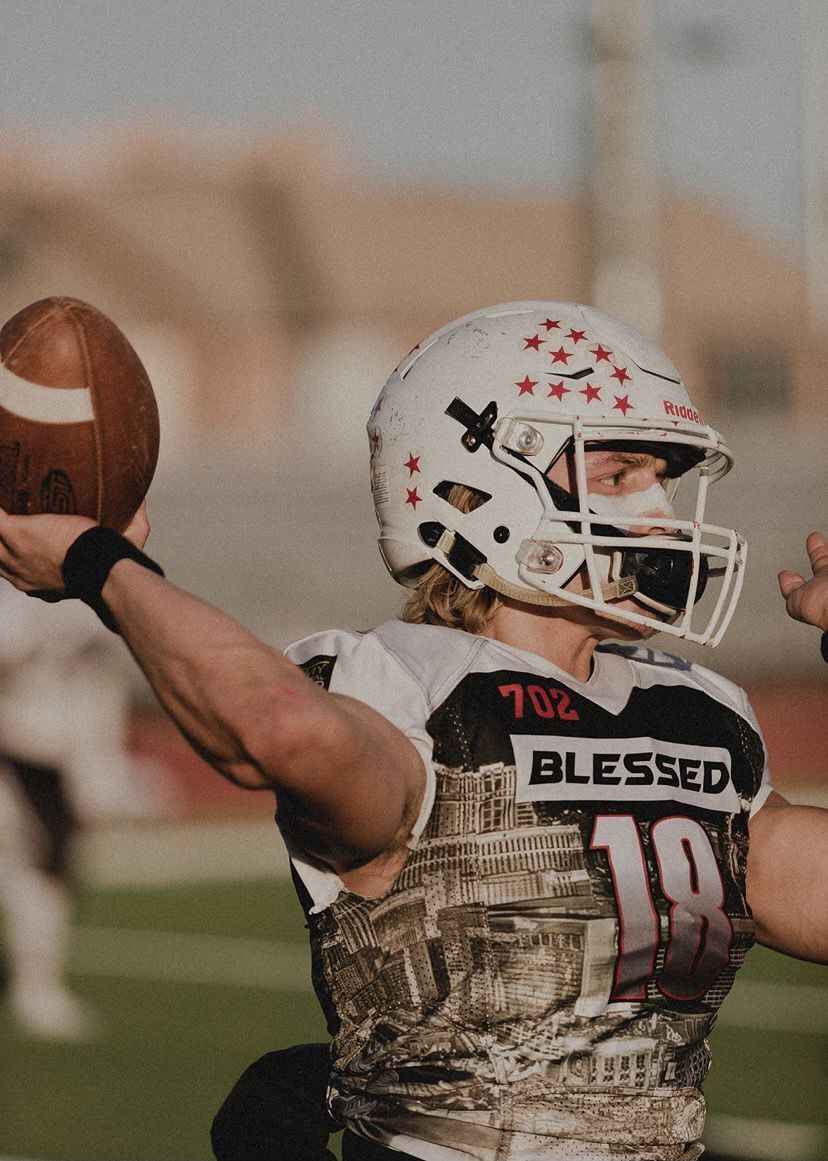 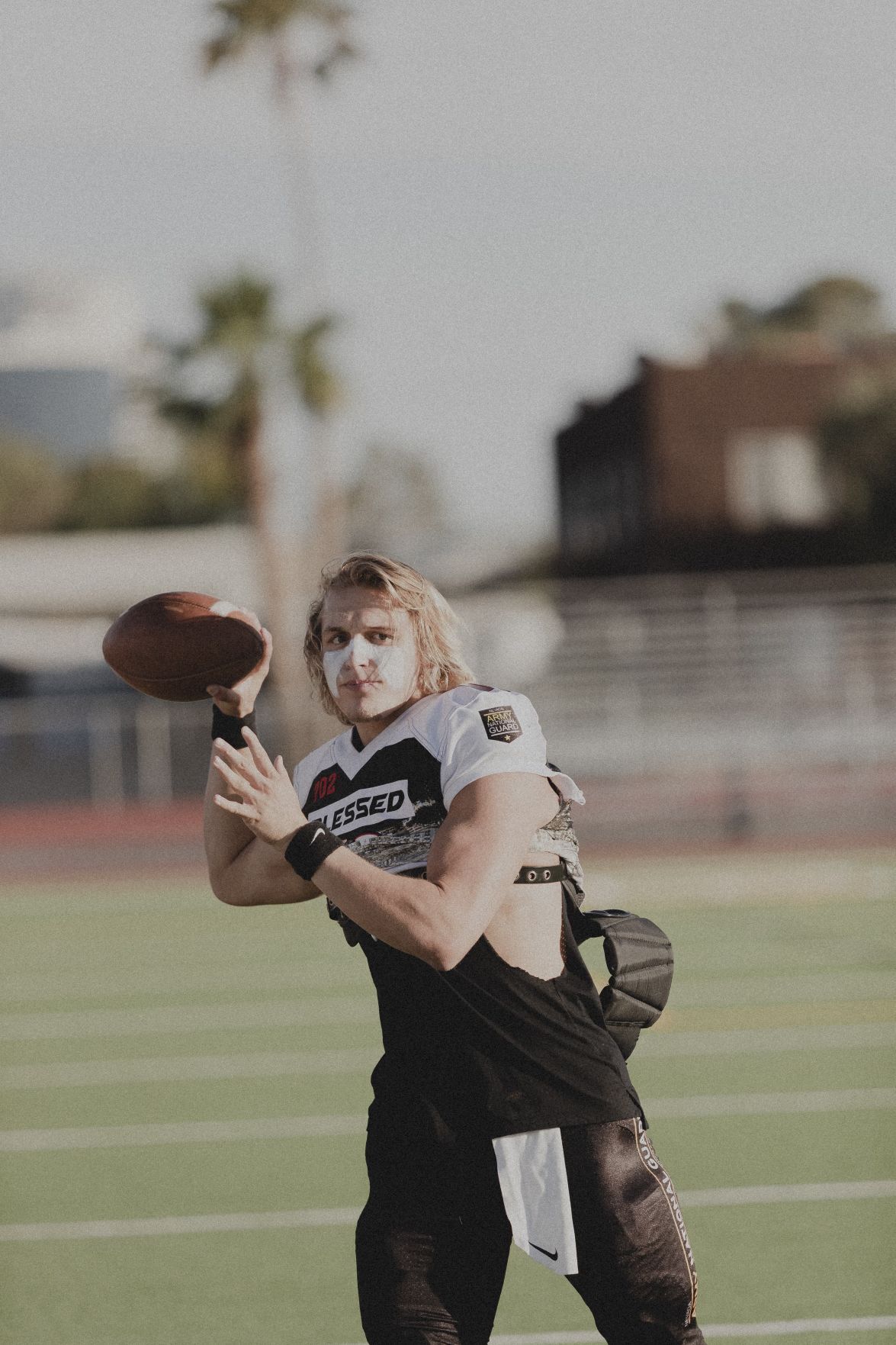 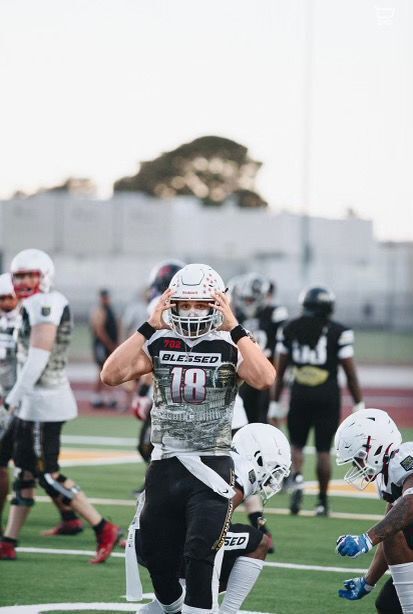 MISSOULA — All Daniel Britt could do was stare up at the ceiling and cry.

It was normally about 3 a.m. when the Montana football signee would wake up from his sleep on the downstairs couch at his home in Las Vegas. He oftentimes couldn’t fall back asleep until 7 a.m., so he’d lay there for hour after hour while the rest of his family was sound asleep upstairs.

For chunks of that time, Britt had tears running down his cheeks and two thoughts on his mind as he recovered from surgery.

“I’d be thinking, one, I’m never going to get to play football again,” he said, “and two, man, my face is killing me.”

Britt’s thoughts of possibly never being able to play football again stemmed from the same issue as to why his face was hurting. He had been knocked out of football, at least only temporarily he hoped, by an injury that he could best sum up as: “I broke my face.”

Injuries aren’t uncommon on the football field, but a broken face might be right up there with the least-heard reasons of why a player was sidelined. Britt faced the doubters head on in 2019.

He went from the fourth-string quarterback to the starter who knocked off a dynasty program while leading Liberty High School to a Nevada state title just months after the catastrophic injury. In doing so, he altered the outlook for his life by earning a full-ride college scholarship.

“I learned that I’m a fighter,” he said. “I knew I was, and no one could tell me I wasn’t just because no one knew what I went through.”

Before those sleepless nights on the couch, Britt cried at the hospital.

During a checkup after surgery, his doctor had a message for him. The risk of Britt breaking bones in his face again while playing football was high, meaning he should consider giving up the sport.

Britt had battled back from injuries before. He broke an ankle and fractured a shin playing flag football as a kid. He fractured his left wrist his freshman year during a game with some friends.

This injury was different. Britt broke the right side of his face from his cheekbone to his eye socket when he and his running back collided during a handoff. Being spring practice, no one was wearing helmets or pads, so the collision left Britt with blood pouring out of his nose and a concussion.

The doctor’s initial diagnosis at the hospital was a fracture that could heal on its own. But things seemed off. Everyone kept telling Britt his face looked lopsided. He didn’t notice the changes as they slowly morphed right in front of his eyes, becoming his new normal.

A return trip to the doctor a month later led to an X-Ray that showed his face wasn’t healing properly because the bones had been shattered. Doctors had to re-break 17 bones in Britt’s face to perform surgery. They put three metal plates in the right side of his face and placed an implant in between those plates by his cheekbone.

It all left Liberty coach Rich Muraco wondering if Britt would ever be able to play again. He was delightfully proven wrong.

“What impressed me the most about Daniel was his drive to be great,” he said. “He’s a driven kid.”

It took some time before Britt could be on the field again. It was longer before he was allowed to have contact. Even when he couldn’t be there physically, he worked on his mental game by studying film while sitting on the same couch where he spent those sleepless nights.

When Britt returned, he had gone from being tied for the lead in the quarterback battle to fourth string. He could've tried moving to another position or transferring to another school so he could get playing time, but Britt believed in himself.

“My attitude was aggressive,” he said. “I felt angry, I guess you could say. I wanted to get all that time back that I missed.”

As Liberty’s winless start to the season wore on, Muraco went with Britt. It provided a change of pace because he was the lone dual-threat quarterback on a team full of pro-style passers.

The main worry for Britt was what if his face got broken again. On his second varsity snap ever, he scored a touchdown that was worth more than six points. Suddenly, the thoughts of him getting injured began to subside.

“That was definitely something that had haunted me and scared me,” he said. “I just let that go in that moment.”

Britt earned the starting job and rattled off 10 straight wins as Liberty turned its 0-5 start to the season into a state title. His leadership by example started to inject energy and camaraderie into a team that had looked flat.

He engineered a playoff win over powerhouse Bishop Gorman, which had won 10 consecutive state titles, and delivered Liberty its first championship. To make such a comeback, he leaned on those closest to him: his family, friends, coaches, teammates and his biggest role model, his stepfather.

“It gives me goosebumps just thinking about it,” he said. “Now I got a new story to start. I’m so hyped because I don’t know what’s coming.”

Britt cried again this past June.

This time, they were happy tears. He had received his first Division I scholarship, a full-ride offer from Montana

“I was thrilled,” he said. “I cried right there when they told me. It felt like my dreams were coming true.”

The Griz had appeared to not initially have much interest in Britt. It wasn't that they felt he wasn’t good enough to play in the Big Sky Conference, but they had already landed their quarterback in that recruiting class when Oregon native Sam Vidlak committed in January 2020.

After Vidlak flipped to Oregon State in May 2020, Britt heard back from Griz offensive coordinator Timm Rosenbach after having reached out months earlier. He received an offer in June and committed in August. Hours after Britt signed with the Griz in December, UM coach Bobby Hauck singled him out by name and raved about his toughness and competitiveness.

“He’s a guy that does a lot of things very well,” Hauck said. “The thing that he does best is win.”

Britt was getting looks from other schools, too. He had offers from FCS schools Eastern Kentucky, Morehead State and Tarleton State when he committed. The news of his commitment prompted UTSA, an FBS program, to extend an offer later that day.

James Madison, a perennial FCS title contender, finally extended an offer two days later, but he turned it down. Nevada, an FBS team in his home state, began to become more serious about an offer, but he told them he was sticking with his commitment to Montana.

The offers might have become more tempting if the pandemic didn’t cancel the 2020 fall football season in Nevada. Liberty was going to have 11 Division I players on its team, and Muraco felt another successful season for Britt could lead to bigger offers, including from San Diego State, another FBS team with which he had been talking.

“I feel Montana got a steal of a player because he’s under the radar,” Muraco said.

A few things caught Britt’s attention about UM: Rosenbach didn’t care about him being under 6 feet tall. He’s 5-foot-11, 185 pounds and initially modeled his game after Michael Vick.

He’s more recently focused on Russell Wilson’s dual-threat play as an undersized player and Aaron Rodgers’ off-balance throws and unique arm angles. He turned that into 2,060 passing yards, 24 touchdowns tosses, 791 rushing yards and 10 running scores in 10 games as a junior while maintaining a 3.8 grade-point average.

He also found a welcoming feeling in Montana. Rosenbach and recruiting coordinator Justin Green would reach out almost every day, while other schools might only be once or twice a week. He even felt Missoula fit his personality.

Most of all, Britt wanted to go to a winning program. He had learned about Montana’s previous success under Hauck and saw the potential to win a national title.

He knows it might take time to become the starter — it was his third high school season before he got a varsity snap — but he’s eager to learn from quarterbacks Cam Humphrey and Kris Brown when he arrives in August.

Winning one would surely produce quite the stream of joyful tears.

Olympian Tom Daley knits while watching in the stands in Tokyo

Olympian Tom Daley knits while watching in the stands in Tokyo

Southern Utah will be playing its final season in the Big Sky before moving to the WAC.

Henderson played nine games for Montana in 2020-21 and entered the transfer portal in April.

Lewis is the fifteenth Montana player to wear 37 and the first from Townsend.

Montana gets commitment from Minnesota high school running back

The Montana football team picks up its fifth known commit in the 2022 recruiting class.

The Griz will open on the road at Sacramento State and will take on Montana State Jan. 8 in Bozeman for the first of two rivalry games.

Rorie led the Grizzlies to back-to-back NCAA Tournament berths in 2018 and '19.

MISSOULA — Ashley Herndon, who played soccer for James Madison from 2013-16 and later played professionally, has been hired as an assistant coach for the Montana women's soccer team.

Montana football signee Daniel Britt runs with the ball while playing for Liberty High School during the 2019 season. Britt overcame an injury that broke bones in his face to earn the starting job, lead Liberty to its first state title and get a full-ride scholarship to play for the Griz starting this fall.

Montana football signee Daniel Britt gazes at the Nevada Class 4A state championship trophy after leading Liberty High School to its first title in 2019. In the playoffs, Britt and Liberty knocked off Bishop Gorman, which had won 10 consecutive state championships. 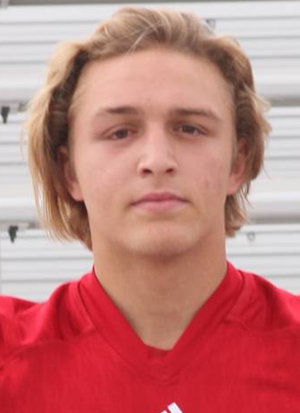