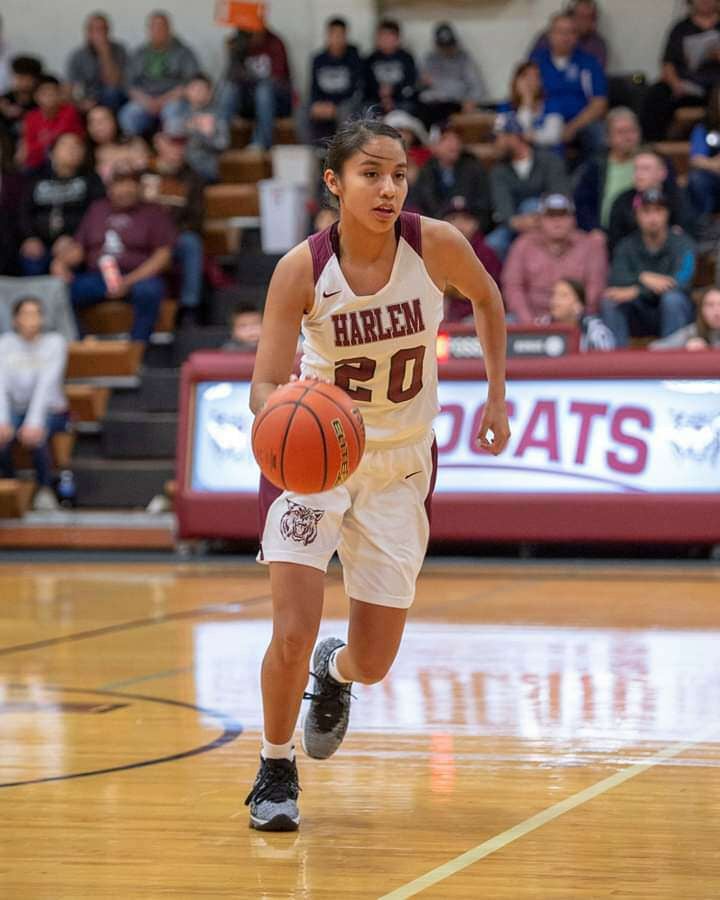 Harlem girls basketball standout L'Tia Lawrence has verbally committed to the Lady Griz. She will sign in April and play on full scholarship.

Lawrence had signed with Montana State-Northern last year but a spot came available for the Lady Griz recently and she is taking it. She was named Class B all-state in all four of her high school seasons.

The 5-foot-8 Lawrence was coached in high school by her father, Marlin. As a junior she averaged 19.1 points, 6.7 rebounds, 3.8 assists and almost two steals per game. As a senior she led her team in scoring (17 ppg.), rebounds and assists.

"Ever since she was little she has always dreamed about playing for the Lady Griz," said coach Lawrence, who has family in Missoula and used to take L'Tia to Griz football games as a child. "She's worked hard her whole life and I'm super excited for her. She's worked her butt off.

"She has good IQ, a very smart player. If she makes a mistake she goes back and tries to learn from it. She's very good in the open court. She can create for herself and her teammates and she can hit the open 3 as well."

The Harlem team went 1-1 at the State B tournament before the event was shut down because of the coronavirus earlier this month. The Wildcats had a close call with undefeated Loyola Sacred Heart in their tourney opener, dropping a 56-51 decision.

On the subject of committing to the Lady Griz L'Tia Lawrence sent the following to the Missoulian va text:

"Growing up every little girl in Montana dreams of playing for their home state at one of the two university’s in Montana and I was one of those little girls.  (To have the) opportunity to have your dream become a reality, no words can express that feeling. I am very thankful for all my coaches, teammates, community and family for their support and Coach Schweyen for this opportunity to become a Lady Griz!"

In other news Tuesday, former Sentinel star Kylie Frohlich, a sophomore member of the Lady Griz this past season, has entered the NCAA transfer portal. That news was confirmed by a family member.

The Montana football team was supposed to kick off fall camp today. Instead, the Griz gathered at Washington-Grizzly Stadium to talk about the Big Sky Conference season being postponed to the spring. A look into what that scene was like:

'The decision was inevitable': Big Sky coaches, ADs react to postponement of all fall sports

'You're very much not in control:' UM volleyball begins practice as season remains in doubt

Though their season is in doubt, the Montana volleyball team is enjoying every minute of the practice floor.

On Friday afternoon the Great Northwest Athletic Conference (GNAC) announced that it was canceling fall sports at all member institutions, which includes Central Washington, due to COVID-19 concerns.