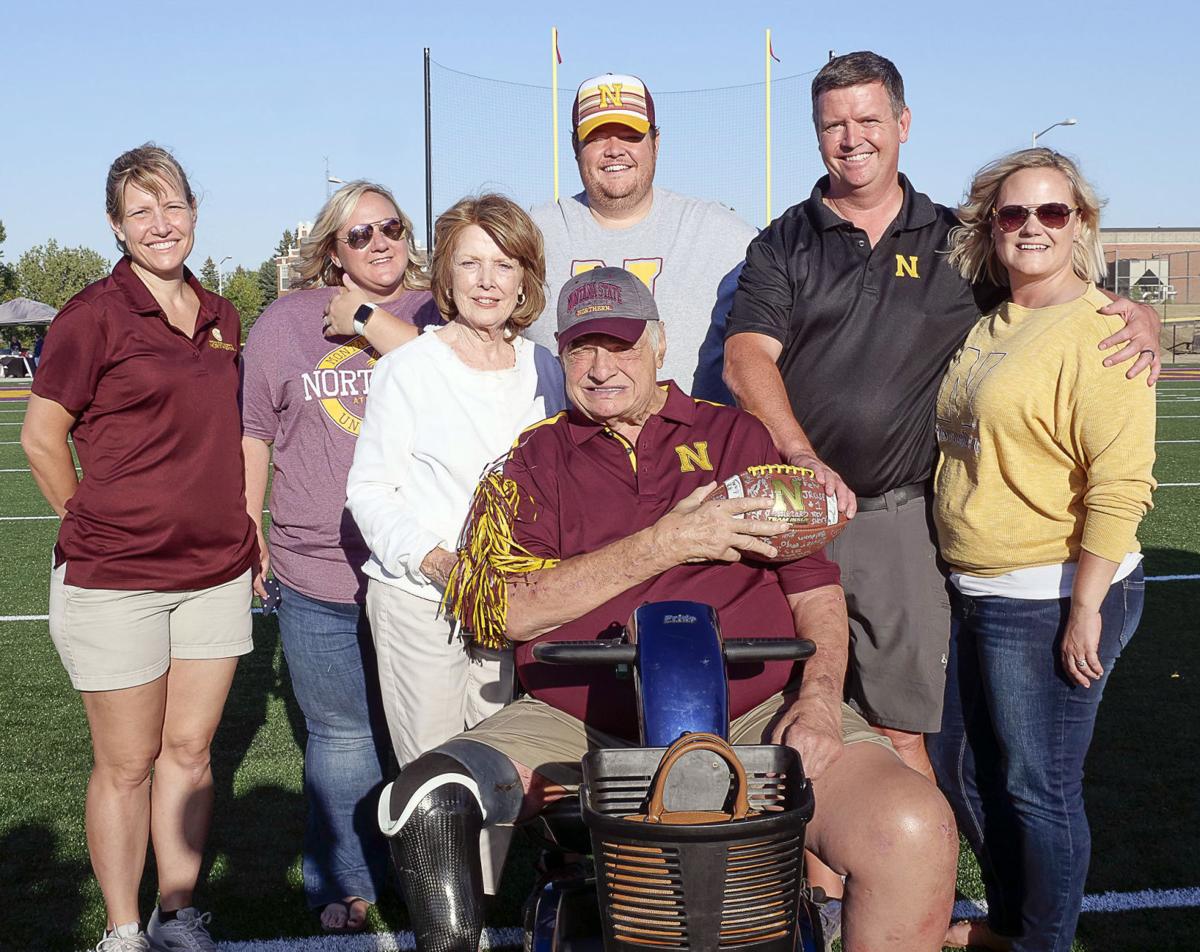 Mike Tilleman poses with his family after they were honored Aug. 26 for contributions to the new field at Montana State-Northern. Tilleman was 76. 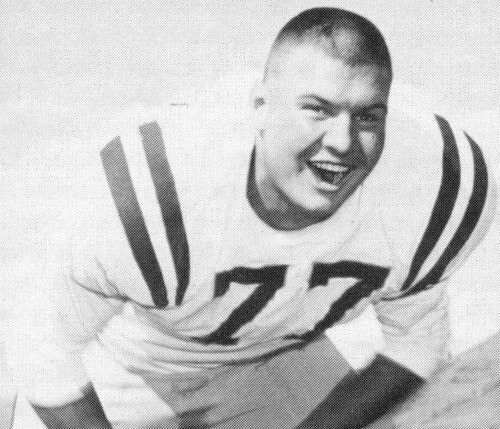 BOZEMAN — Mike Tilleman, a Chinook High School all-American and University of Montana football legend who played 12 years in the NFL before returning to his native Hi-Line where he helped restore football at Montana State-Northern, died Friday morning in Havre. He was 76.

Tilleman had returned home to Havre in mid-August after spending nearly six months in hospitals due to complications related to a heart condition. He and his family were honored Aug. 26 at MSU-Northern's new field for their initial gift for the project and longtime support.

Tilleman rode a scooter onto the new artificial turf, which officially became Tilleman Field on Thursday, according to a press release from the school.

“Oh my god,” Tilleman told 406mtsports.com in an interview Aug. 31 when asked his first impressions of the new field. “That was it. Oh my god. It's unbelievably neat.”

Tilleman has been credited with restoring MSU-Northern football in 1999 after a 27-year absence. His annual Legends for the Lights celebrity pheasant hunt and two other fundraisers have brought in more than $2 million for the Northern Lights Athletics Scholarship Foundation.

“We're not here without him,” third-year MSU-Northern coach Andrew Rolin told 406mtsports.com with a heavy heart on Friday. “I've got a lot of gratitude for what he's done."

Rolin said Tilleman was the first community member he met when interviewing for the job two years ago.

"And for very good reason," he said. "He was an icon not just in Havre but the entire Hi-Line. There's no Northern football without the Tillemans, and without Mike Tilleman specifically. He had a huge impact on a lot of lives in this area."

Rolin, who said he hopes to honor Tilleman again in the spring when the Lights return to action on the field, added: "The guy, you could tell he just loves football. And I think he just really appreciated those who have the love of the game he did. He was a winner, a guy who wanted to win in everything he did, whether selling cars or playing football games."

Tilleman was the son of Belgian immigrants who settled on a farm outside of Zurich. He had dozens of scholarship offers from around the country and chose Montana over Washington for college football.

After earning all-Big Sky Conference honors twice at Montana, Tilleman gave up his senior year to play in the NFL. A 6-foot-7, 270-pounder, he was drafted by the Denver Broncos of the old AFL and the Minnesota Vikings of the NFL in 1965.

Tilleman starred on four teams as a defensive tackle, led the league in tackles and sacks in 1972, and started in 148 of his 156 games — including the last 123. No Montana-born player started more NFL games.

He was New Orleans' team MVP in 1970 and the Houston Oilers' MVP in '72. He's also known for blocking future NFL Hall of Famer Alex Karras on teammate Tom Dempsey's record-setting 63-yard field goal to beat the Detroit Lions in 1970.

Tilleman earned the league’s Brian Piccolo Award as the comeback player of the year in ‘72 after overcoming bowel cancer discovered during surgery to remove an appendix that ruptured during a handball game. Upon retirement after the 1976 season, he returned to the Hi-Line, opening Tilleman Motor Company first in Chinook and then Havre.

Tilleman was inducted into the Grizzly Sports Hall of Fame in 2003 and in the Montana Football Hall of Fame's second class in 2017.

Tilleman fought through his health issues over the summer even though at times he was given just a few days to live. He returned home in mid-August to a flood of well-wishers.

“It’s the damndest thing,” he told 406mtsports.com then. “I’ve got the greatest friends in the world. They come here in droves, and I ask them, ‘Is this how you’re supposed to act in a pre-wake?’ They keep coming to visit, which is nice because if they come to visit when I’m cold I won’t know it. Man, the support is unbelievable.

Email 406mtsports.com and Lee Montana newspapers Executive Sports Editor Jeff Welsch at jeff.welsch@406mtsports.com or follow him on Twitter at @406sportswelsch

MISSOULA — If this were a typical autumn in Missoula, Montana women's basketball fans would be grabbing their maroon gear out of the closet, anxiously preparing for Tuesday's maroon-silver scrimmage.

The Big Sky could be going to a six-game schedule for football in the spring.

Former Montana linebacker Dante Olson is getting another shot in the NFL.

Mike Tilleman poses with his family after they were honored Aug. 26 for contributions to the new field at Montana State-Northern. Tilleman was 76.