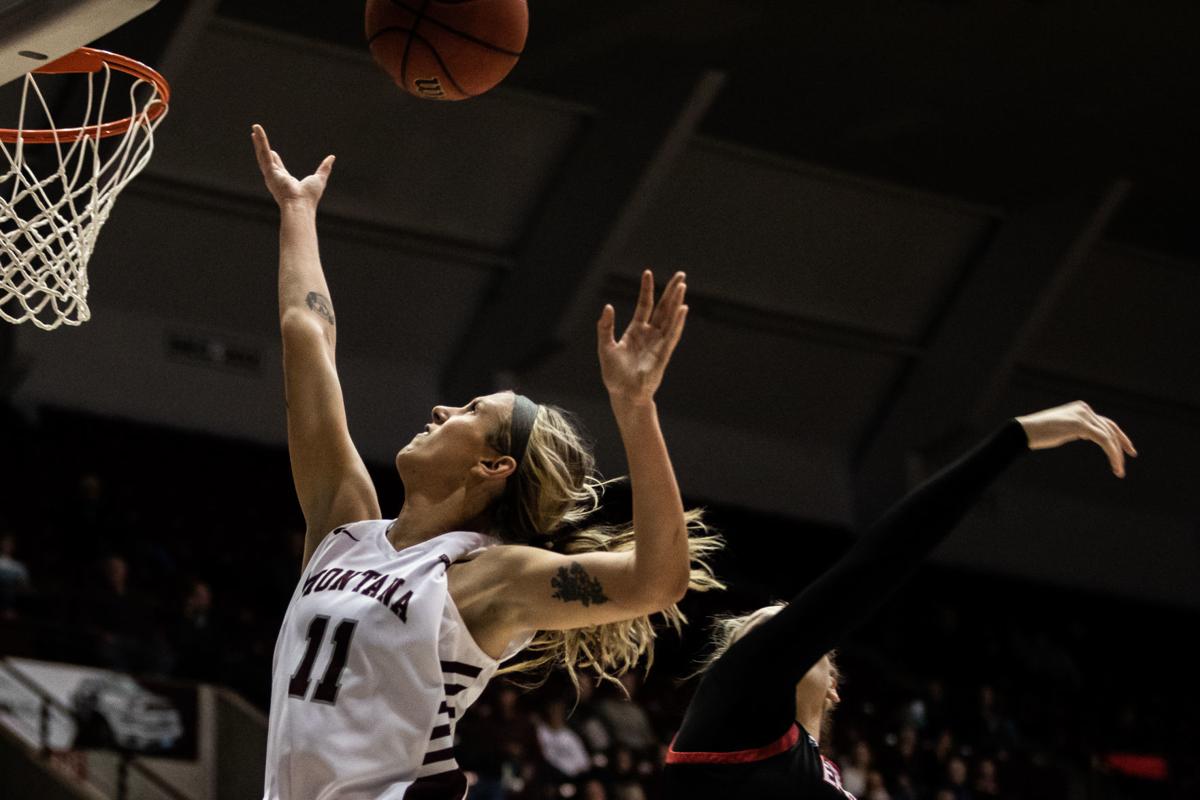 Montana forward Abby Anderson shoots a layup under pressure from the Eastern Washington defense in Montana's 92-54 win over the Eagles Thursday night at Dahlberg Arena. 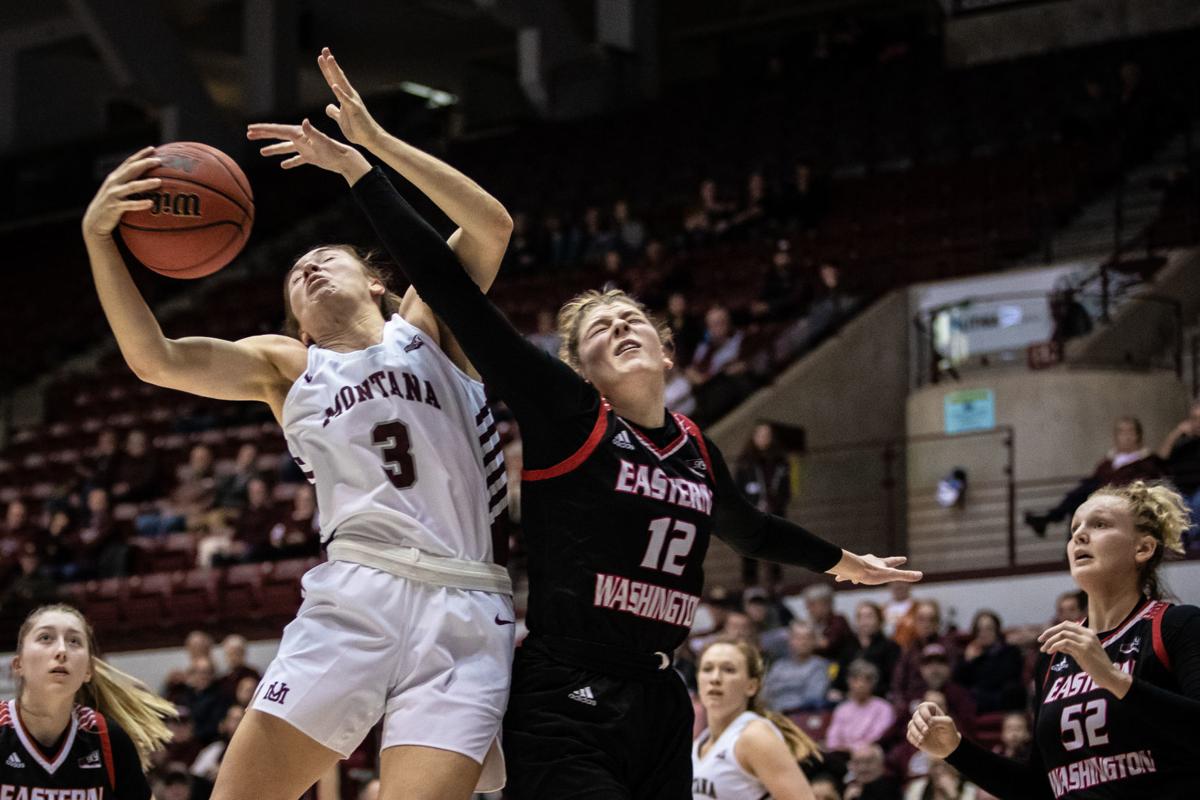 Montana guard Gabi Harrington seizes a rebound under the hoop in the second half before being knocked to the floor by the Eastern Washington defense.

Montana forward Abby Anderson shoots a layup under pressure from the Eastern Washington defense in Montana's 92-54 win over the Eagles Thursday night at Dahlberg Arena.

Montana guard Gabi Harrington seizes a rebound under the hoop in the second half before being knocked to the floor by the Eastern Washington defense.

MISSOULA — Hitting a halfcourt shot is next to impossible when someone is jabbing you in the midsection.

Unless, of course, you're McKenzie Johnston. She's been practicing halfcourt heaves since she was a little kid, so a little foul isn't going to prevent her from creating a picturesque rainbow.

Johnston's electrifying, buzzer-beating bucket from midcourt highlighted a big first-half run for the Montana women's basketball team Thursday. The Lady Griz built a 15-point halftime lead and poured it on down the stretch in a 92-54 win over Eastern Washington in front of 2,502 fans at Dahlberg Arena.

Johnston from HALF COURT to end the 1st!! pic.twitter.com/vT7wHfYDIw

Johnston, who was clearly fouled by Eastern's Kennedy Dickie but didn't get a call on her halfcourt shot, credits her parents for their patience when it comes to her long-range success. She hit a similar shot back in December at Utah Valley.

"Every single day when I'd go watch my (older) sisters play, I'd only practice halfcourt shots after the games for about an hour," said Johnston, who recorded a double-double against the Eagles with 11 points and 10 assists. "I'm going to give credit to my parents for staying after games until 10 o'clock at night so I could practice my halfcourters."

With Thursday's win, Montana reclaimed a share of first place in the Big Sky Conference at 4-1 (9-5) overall. Montana State (4-1, 8-6) suffered its first league loss in a double overtime home heartbreaker against Idaho, 69-68.

While Johnston had the shot of the night, Lady Griz senior guard Taylor Goligoski put on the most impressive shooting display. She hit 8 of 14 shots and 4 of 9 from 3-point range for a game-high 21 points. She had 12 points in the third quarter alone, helping her team build a 76-48 lead.

"This week we had a couple good practices and I just got into a rhythm early and everyone was hitting shots tonight, feeding off each other," Goligoski said. "We have a really good dynamic with our inside game. Then our guards can shoot and drive a little bit. We have a little bit of everything and you don't know what to expect. Each night someone could go off."

Injury-depleted Eastern (1-3, 2-11) was good early, building a 21-12 lead behind five 3-pointers. Montana coach Shannon Schweyen called timeout to talk to her team about defense and the Lady Griz turned the tables, going on a 25-4 run highlighted by Johnston's halfcourt shot at the end of the first quarter.

"I told them start guarding the three," Schweyen said of her message in a first-quarter timeout. "We knew with the players they have that's the strength of their game, perimeter shooting.

"We didn't do a good job initially getting up and getting in to those threes. So it was more like getting some stops on D, looking at some lineups to get some kids that were active in there."

Schweyen was especially please with the way her players shared the ball. The Lady Griz had 23 assists on 29 field goals and turned the ball over just seven times.

"There's nothing like when the ball goes in," said Schweyen, whose team hit 49.2 percent of its attempts from the field (29 for 59). "Being home you're relaxed more and we got good looks in zone and we knocked them down."

Montana and Montana State will head into the weekend tied atop the Big Sky standings. The Cats play at defending Big Sky tourney champion Portland State on Saturday and the Lady Griz will play at PSU on Monday.

But for now, the Lady Griz can relax and revel in their blowout win. Five players scored in double figures Thursday, with Jamie Pickens (14), Gabi Harrington (14) and Madi Schoening (10) joining Gologoski and Johnston.

Asked if Thursday's halfcourt heave was the toughest shot she's ever made, Johnston chuckled.

"Last year I had one against them where my mask came in front of my eyes. I was pulling it up with one hand and shot it," she recalled, alluding to the fact she had to wear protection after breaking her nose.

"But yeah, that was pretty cool tonight."

Bill Speltz is Missoulian Sports Editor and has served as Sunday columnist the past 13 years. Do you have a story idea? Email Bill at bill.speltz@missoulian.com.

The Lady Griz reclaimed the Big Sky Conference lead with a 92-54 blowout over Eastern Washington in Dahlberg Arena on Thursday evening.