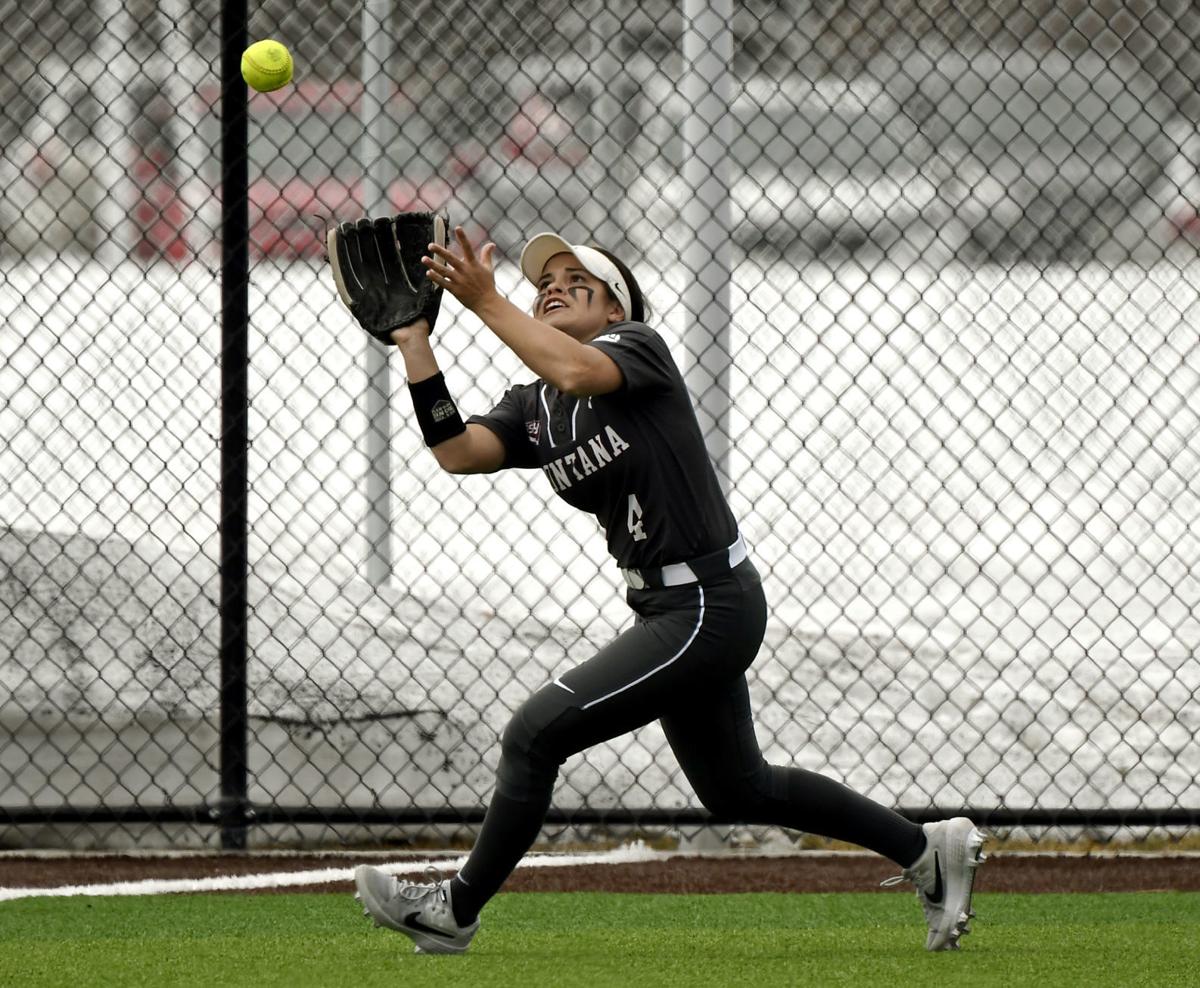 Montana left fielder Anne Mari Petrino catches a fly ball in a 2019 game against Nevada at Grizzly Softball Field. Petrino will be moving on to attend law school at Gonzaga instead of returning to Montana for the extra year of eligibility the NCAA granted seniors in spring sports because their season was cut well short by the coronavirus pandemic. 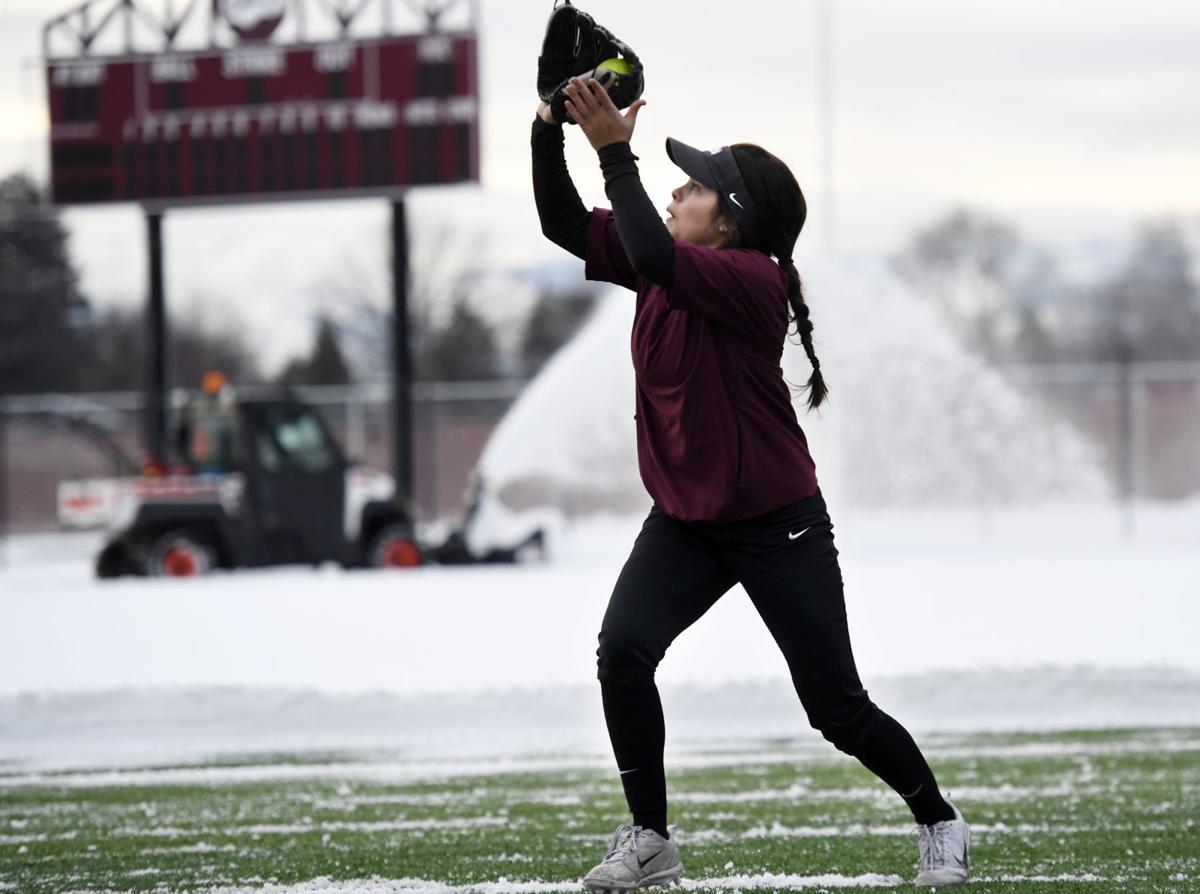 University of Montana's Anne Mari Petrino catches a ball during a 2018 practice.

MISSOULA — Montana softball outfielder Anne Mari Petrino held out hope that she would get to play some more softball this spring and end her college career on her terms.

The recently graduated senior knew she almost certainly wouldn’t be returning if the NCAA decided that seniors in spring sports would be granted an extra year of eligibility because of the coronavirus, which ended up being announced March 30. She had already been admitted to Gonzaga’s law school, with a scholarship to boot, and had made her decision and paid her fees that were due by April 1.

Even though Petrino could’ve reconsidered her future and returned to Missoula, she felt she had already chosen what was in her best interests. That didn’t lessen the emotions of the tectonic shift of moving on to a new chapter after her four-year career as a starter at Montana.

“It’s hard to move on, but I think this was an opportunity that I really couldn’t pass up,” Petrino said. “I’m really trying to focus more on how great my 3.75 years were and remember all the great moments I had with my team.

"I think all of us would love to play forever and stay together forever. It was a choice I had to make for my future. Just the opportunity with my scholarship, I just really couldn’t pass it up. I still get upset about it. It’s still hard, but I guess it’s something that had to be done.”

Petrino envisions working in criminal law, an interest she developed from learning about the psychology of serial killers while watching shows like “Mindhunter” and “Criminal Minds” growing up. She’s not sure yet if she wants to work for the defense or as a prosecutor.

If being a lawyer ends up not being how she envisioned it, she feels the flexibility of her law degree, combined with her bachelor’s degree in business, will allow her to follow the other path she’s thought about: sticking in sports by becoming an athletic director.

“I’ve always been passionate about wanting to help people and I’ve always been super interested in law and social justice,” Petrino said. “If I end up not really liking actually practicing law, I can always try to get into athletic administration because I think there, too, you have the opportunity to help a bunch of people as well.”

Petrino surely helped her team during her time at Montana, which was characterized by her consistency. She suited up as a true freshman and ended up starting in 158 career games and playing in 167 of the Grizzlies’ 194 games in her four seasons in Missoula.

Petrino used her speed in left field to track down fly balls, pulling off catches on dives or up against the outfield fence to snag balls that appeared to be dropping for hits.

Offensively, she was a left-handed slap hitter who tried to reach base so her teammates could drive her in and look good. She got on base at a .281 clip and finished her career fourth in program history with 12 stolen bases and eighth with 49 runs scored.

“She has been probably one of our more consistent players,” said third-year coach Melanie Meuchel, who was an assistant coach during the program’s first three years. “You definitely knew that any ball that’s going to left field was going to be caught. She just had a knack for running through a fence or going to the wall or just making a play for her teammates.”

Petrino was able to put herself in position to do that by staying present in the moment and putting everything else aside while striving to be great at softball. And she got it done in the classroom, too, as a multi-time Academic All-Big Sky selection, not a surprise seeing how she’s going on to law school.

“She is probably one of the more prominent individuals — excels extremely well in the classroom, excels as a student of the game and came to every practice prepared and focused,” Meuchel said. “I didn’t feel like she let days get by her out on the softball field.”

Being amped for softball was easy for Petrino. For one, she’s loved softball since she started playing in fourth grade and playing in different parts of the country while her family moved.

Also, she enjoyed her teammates, her coaches and the support she saw for Griz softball. That family atmosphere had helped sell her on Montana when she was deciding offers from multiple Big Sky schools.

Petrino got to play with two distinct teams, the original members of the first signing class and then a crop of newcomers, seeing her role evolve into one of a leader as she became an upperclassman while the team went through a rebuilding year her junior season and renewed success this spring. The moments that came from those times together are what she’ll remember as she moves on.

“They truly were my best friends, so just remembering all the girls that I had an opportunity to play with and just all the great memories that we had together,” Petrino said. “We traveled all over together. We got to experience some amazing places. We had great moments on the field together. Definitely just cherishing all those moments that I had with my teammates and kind of the lifelong friendships that formed from those.”

Also memorable was the presence of her mother or father at games, both home and away.

Petrino’s father, Idaho football coach Paul Petrino, a Butte native who grew up in Helena, was the one who took her to her first travel softball tryouts when they lived in Atlanta. Softball was their special time together because the season came during his least-busy time of the year while he coached with the Atlanta Falcons, Arkansas Razorbacks, Illinois Fighting Illini and Idaho Vandals.

“It’s been amazing having them in the stands supporting me and cheering me on, so that’s been really, really great and definitely memories that I’ll cherish forever,” Petrino said.

Rooting interests are a mixed bag. Aside from her father coaching at Idaho, her twin brother was the Vandals starting quarterback. She’s also engaged to Griz football player Trase Le Texier and attended Montana. So when the Vandals and Griz play each other in football, she said her rooting interests lie with Idaho.

Her father’s rooting interest comes easy when watching his daughter play. But he’s made sure any UM gear he was wearing said “softball” on it. He’s even said, “there’s no bigger Grizzly softball fan than me,” an assessment with which Meuchel agreed.

“Paul Petrino is probably the biggest Griz softball fan,” Meuchel said. “He travels here to games, but he travels on the road with our group. He, as all parents, is a very proud dad. I think he really enjoyed watching his daughter but enjoyed the game and enjoyed watching her teammates excel as well.”

The Griz were enjoying that success this season. They took ranked Texas Tech to extra innings, earned the program’s first win over a ranked team by beating Arkansas, picked up another Power Five win against Michigan State and beat Weber State in non-conference play.

They had gotten off their best 24-game start in the program’s six seasons of existence by the time the season was canceled. So while Petrino feels like they accomplished much, there was more left on the table for the team to achieve.

Petrino, who won the Big Sky tournament title as a freshman, was looking to bookend her career with another ring before moving on to the next phase of her life. The future lawyer in her would make the argument the team was on course to do that, which would've been another feather in the cap of the young program that's quickly becoming a league mainstay.

“The bar’s been set that we’ll be atop of the Big Sky and competing for a championship every year,” Petrino said. “I know that’s what everyone’s going to keep working towards. It stinks because I really feel like I would’ve gone in and out with one.

“There wasn’t a doubt in my mind that we would play for a Big Sky championship this year. I just full heartedly believe that. I thought we were just as good as when we won it my freshman year.”

University of Montana football players who took to Twitter to question the Missoula City-County Health Department's coronavirus quarantine restrictions have since apologized, according to the UM athletic director

University of Montana football players who took to Twitter to question the Missoula City-County Health Department's coronavirus quarantine restrictions have since apologized, according to the UM athletic director

Former Montana Grizzlies Dante Olson and Jerry Louie-McGee might not be finished with football just yet.

Tilleman was an all-American football player at Chinnok High School, all-conference for the Montana Grizzlies and played 12 years in the NFL.

Tilleman was an all-American football player at Chinnok High School, all-conference for the Montana Grizzlies and played 12 years in the NFL.

The Montana football team gets its seventh known commit in the 2021 recruiting class.

'Let’s show them who Mo Town is': An oral history of the day Montana shocked No. 1 North Dakota State

Relive Montana's improbable win over No. 1 North Dakota State to kick off the 2015 season through the eyes of those who were there.

Naseem Gaskin not on Montana men's hoops roster after arrest

Gaskin not on UM men's hoops roster after arrest

The Champions Center at the University of Montana reopened Wednesday after being closed for four days as a precautionary measure because an unspecificed number of Griz athletes were placed in quarantine or isolation.

The University of Montana cancels its '95 Championship Night.

Montana left fielder Anne Mari Petrino catches a fly ball in a 2019 game against Nevada at Grizzly Softball Field. Petrino will be moving on to attend law school at Gonzaga instead of returning to Montana for the extra year of eligibility the NCAA granted seniors in spring sports because their season was cut well short by the coronavirus pandemic.

University of Montana's Anne Mari Petrino catches a ball during a 2018 practice. 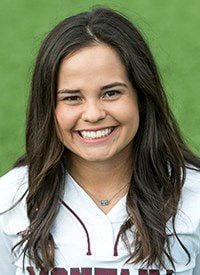