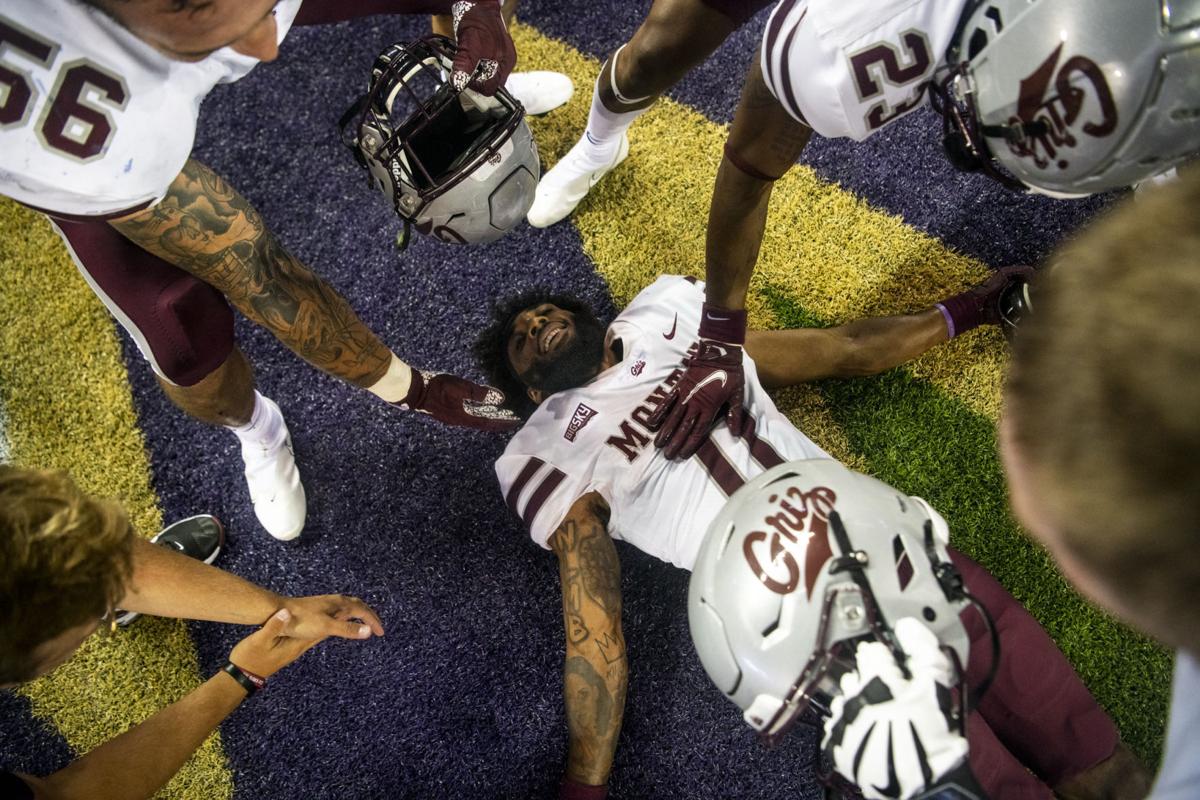 Teammates surround Montana senior cornerback Omar Hicks Onu (0) while he celebrates at the 50-yard line following the Grizzlies’ 13-7 victory over the Huskies on Sept. 4 at Husky Stadium in Seattle, Washington. 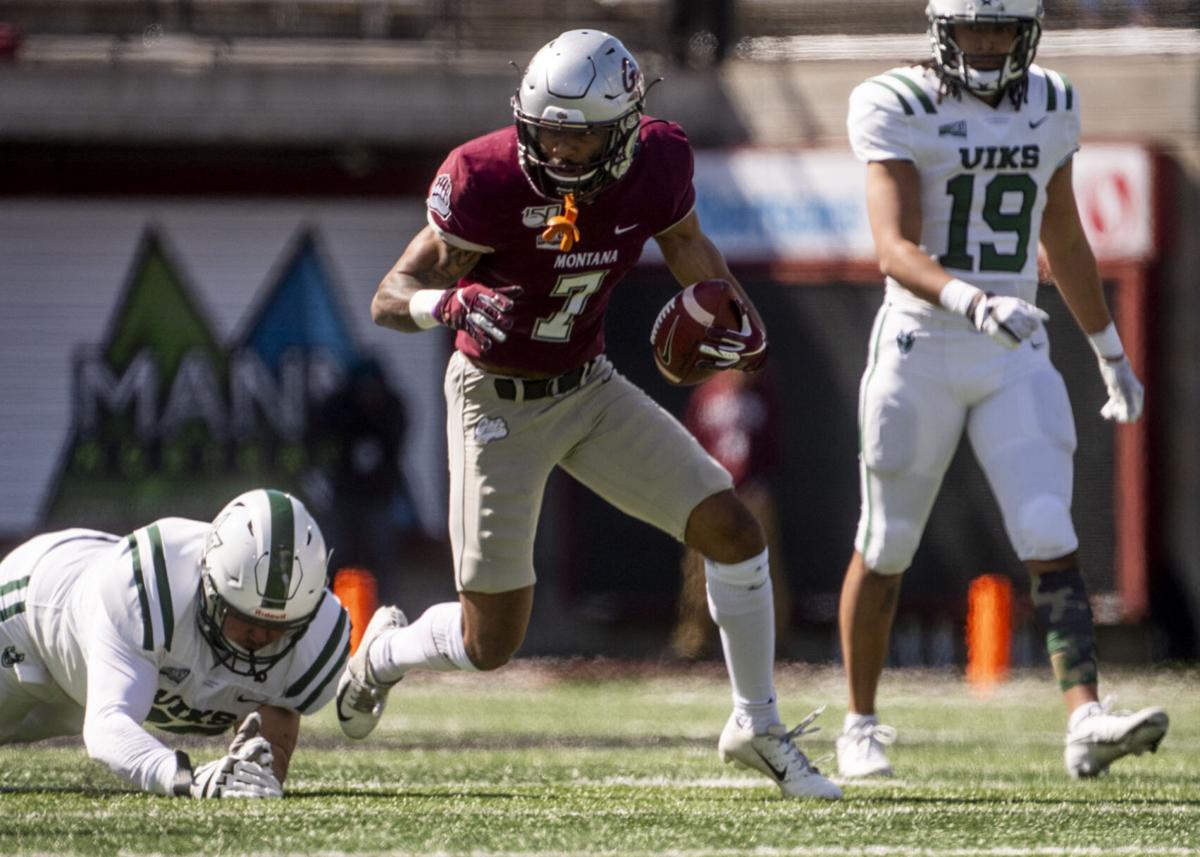 Montana senior cornerback Omar Hicks Onu (7) runs with the ball during the college football game between the Griz and Portland State on April 17 at Washington-Grizzly Stadium in Missoula. 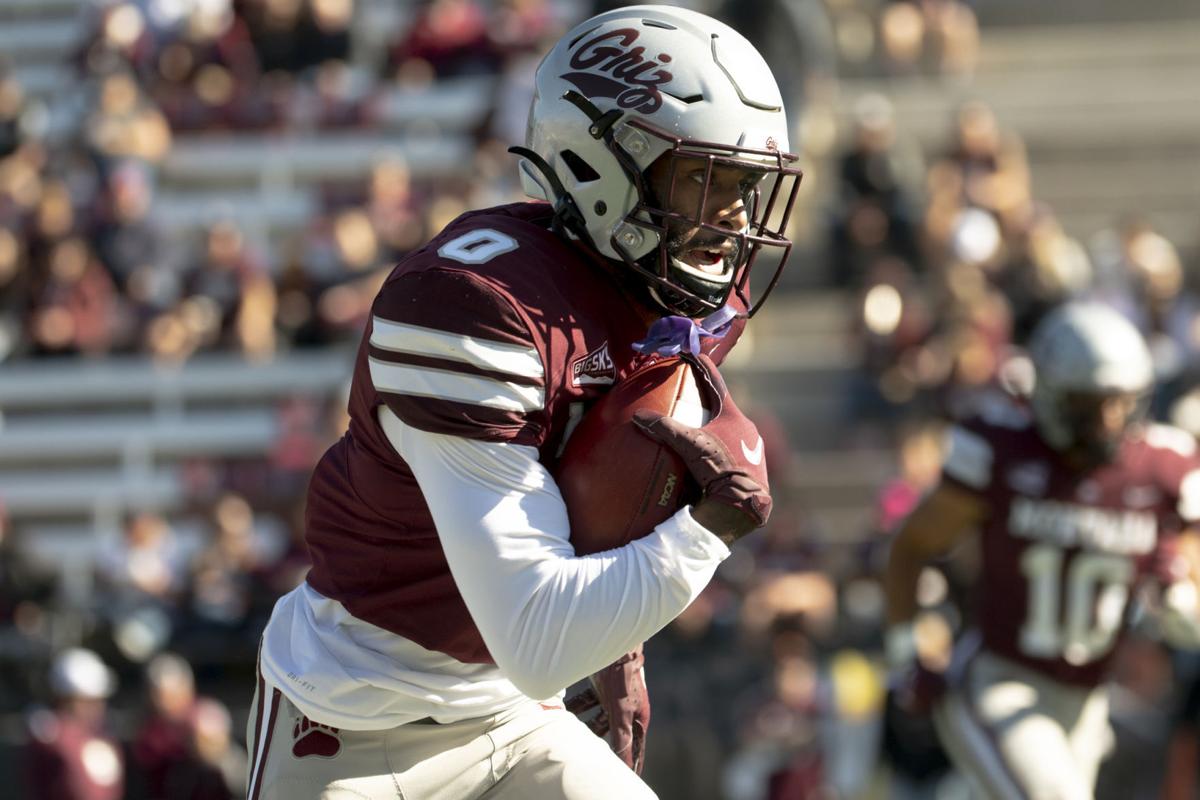 Montana senior cornerback Omar Hicks Onu warms up before kickoff during the college football game between the Griz and Dixie State on Saturday at Washington-Grizzly Stadium in Missoula.

MISSOULA — Omar Hicks Onu had to let the world know about coach Bobby Hauck after Montana upset Washington to open the season.

“If you got any type of dawg in you, I promise coach Hauck gon bring it out,” the Griz senior cornerback tweeted.

Hicks Onu had just played in his first fall game for UM after he transferred from Oregon State for his final season of college. Everything he had been told while being pushed during winter conditioning, weight room training and practicing was proven to be true on the field.

It’s not that Hicks Onu didn’t have that dawg in him before and other coaches didn’t bring some of it out of him. Hauck just helped squeeze more out of him and bring it to another level while he's started every game this fall.

Griz sophomore safety TraJon Cotton, who played with Hicks Onu at OSU, has seen that firsthand. He credits it to Hicks Onu and Hauck both being competitive people, seeing that from the former with how much film he studies, even calling Hicks Onu "a guru" in the film room.

“It was a perfect fit,” Cotton said. “I think Montana has brought out what might have been held back a little bit. Just that dawg. Letting him play. Letting him make plays. Just expecting him to be the best on the field.”

It took Hicks Onu some time to settle in after he transferred in ahead of 2020 spring camp. Hauck has seen him become more accepting that the coaches have his best interests in mind.

“I think he’s opened up since he got here,” Hauck said. “He figured out we were pretty good dudes and care about each other. I think that’s really fit what he wanted out of college.”

It was natural for Hicks Onu to at first question whether it was the right decision to transfer after he graduated from OSU and there was a coaching change. He never envisioned playing at an FCS school, but the move not only met his expectations but exceeded them.

“I’ve realized my teammates are more than capable, my coaches are the best coaches I’ve ever had,” he said. “Just being here, it taught me one, it doesn’t matter where you play. As long as you can play football, you’ll play. And two, don’t judge a book by its cover.”

Hicks Onu had his playing time at OSU limited by a knee injury during the 2018 offseason.

It was the second time in five years he suffered a freak injury, that one coming when he tangled feet with a wide receiver while doing extra one-on-one work. His first injury came before his senior year of high school when he tore the meniscus in a knee while jumping in warmups.

Both times, Hicks Onu has shown he can rebound.

Hicks Onu learned the make-or-break nature of football when he started playing at 5 years old in football-crazed Texas because he wanted to be like his older brother, who went on to play at Div. II Midwestern State. By 10, he was making a list of about 25 schools where he wanted to play college football, including Miami, USC, Florida and Texas.

Hicks Onu had to work hard in high school to achieve that dream because he was a late bloomer. He went into varsity football as an undersized freshman, not some stud athlete who got everything handed to him.

At Hebron High School, he even excelled on the track as a sprinter in Lewisville, Texas. He’d go through offseason football workouts led by coach Brian Brazil, only to follow up that by heading over to track practice.

“He’s someone who understands the process and can follow the coach’s lead because he feels like he’s got a lot to prove,” Brazil said. “When things didn’t come easy, it made him work harder to prove what he thought he could do. It makes him a blue-collar, hard-working guy. If he rested on his ability and didn’t put in the work, I don’t think he’d become the player he is.”

People who didn’t know Hicks Onu well would call him cocky when he was in high school. He saw it as being confident. That’s when he knew he had something others didn’t, even getting voted as a team captain.

Hicks Onu’s belief in himself carried over to OSU, where he played in 24 games and started twice as a freshman and sophomore before his injury. He played in only six games there after the injury, but he wasn’t worried when he entered the transfer portal without a destination in mind, feeling others would recognize his abilities.

That confident nature was nurtured through the hard work he put in over the years.

When Hicks Onu got injured at OSU, he wished there would’ve been more experienced veterans to help him handle the adversity during the recovery phase.

As a seventh-year senior now, he’s tried to bring that veteran leadership to UM. It’s how he can make an impact beyond just his on-the-field play and can leave the place better than he found it.

Cotton has seen Hicks Onu open up more and more the longer they’ve been at UM. They had started out together in the cornerbacks group before Cotton got moved to safety.

“He’s definitely more vocal than when he got here,” Cotton said. “Even at Oregon State, he wasn’t that vocal. Here, he’s kind of taken command of that corner room. He’s like an on-field leader. He’s a lead-by-example guy, but if he has to say something, he’s not scared to say it at all.”

It might not seem surprising that Hicks Onu can take on a vocal role given how well-spoken he is off the field. Sophomore Garrett Graves, a Eureka grad, has seen from the safety position just how much Hicks Onu cares about the game.

“He attacks this like a business,” he said. “That’s something that you really love to see out of your teammates, that they care about it and this is something that is very meaningful and important and they’re not just coming out and goofing off on the days that aren’t Saturdays. I think that’s something about Omar that’s special is he’s very diligent and a serious person.”

Hicks Onu is also a player whose smarts — he’s getting a master’s degree in anthropology — can help take his play to another level. His knowledge on the field increases the responsibilities the coaches can ask of him and can allow him to adjust better within a game.

Hauck welcomes the stable veteran presence that Hicks Onu has brought to what was a rather young position group at cornerback. So, when he heard about Hicks Onu’s comments after the Washington game, it struck a chord.

“I always appreciate that, especially from veteran players,” he said. “I think that the veterans have a tendency to be able to see the big picture and why we do what we do. That’s always enjoyable.”

Montana Grizzlies earn No. 6 seed, 1st-round bye in FCS playoffs but have tough road ahead

Montana will open the FCS playoffs by hosting the winner of Eastern Washington and Northern Iowa.

Bill Speltz: The play that swayed the rivalry was pure bliss for the Montana Grizzlies

Not only did the Grizzlies tame the Bobcats Saturday, they proved they're far better-equipped to make a playoff run than their humbled rival.

Montana's Justin Ford finishes the regular season with eight interceptions, which is more than 40 FCS teams had this year.

The Grizzlies never trailed as they halted the Tritons' four-game win streak and picked up their second win in a row to get the Zootown Classic started.

The Grizzlies lead early, and kept the lead throughout in a 68-47 home win over Nebraska Omaha Saturday night at Dahlberg Arena.

UNC Wilmington has withdrawn from the Zootown Classic because of a flu outbreak on the team.

The Montana women's basketball team is on a roll under first-year coach Brian Holsinger. The Lady Griz will try to make it three wins in a row Friday at noon.

Teammates surround Montana senior cornerback Omar Hicks Onu (0) while he celebrates at the 50-yard line following the Grizzlies’ 13-7 victory over the Huskies on Sept. 4 at Husky Stadium in Seattle, Washington.

Montana senior cornerback Omar Hicks Onu (7) runs with the ball during the college football game between the Griz and Portland State on April 17 at Washington-Grizzly Stadium in Missoula.

Montana senior cornerback Omar Hicks Onu warms up before kickoff during the college football game between the Griz and Dixie State on Saturday at Washington-Grizzly Stadium in Missoula. 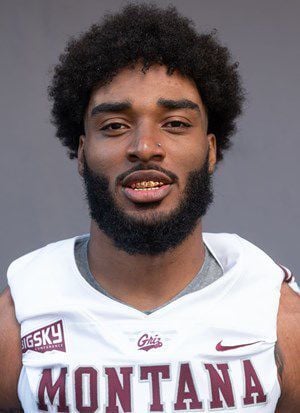