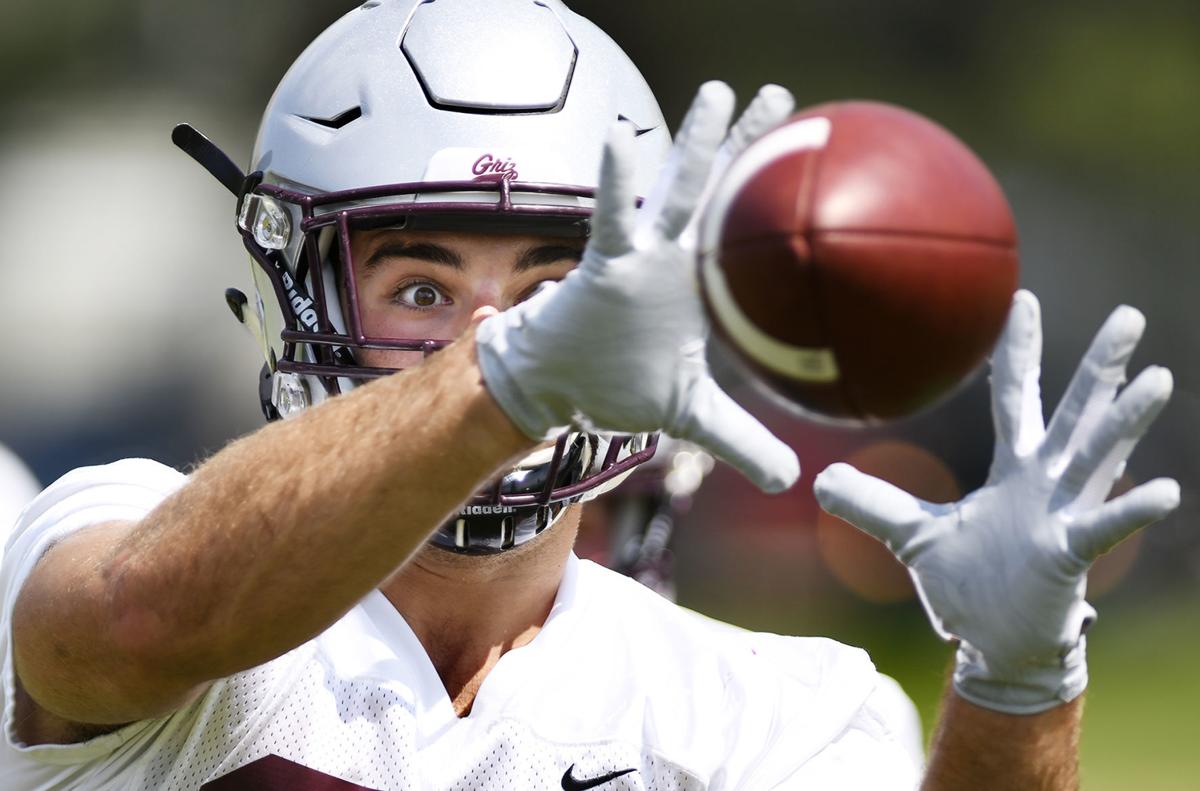 Montana's Levi Janacaro catches a pass during the Grizzlies' first fall camp practice at Dornblaser Field on Tuesday afternoon. Janacaro, a Missoula Big Sky graduate, moved from fullback to running back for the 2019 season. 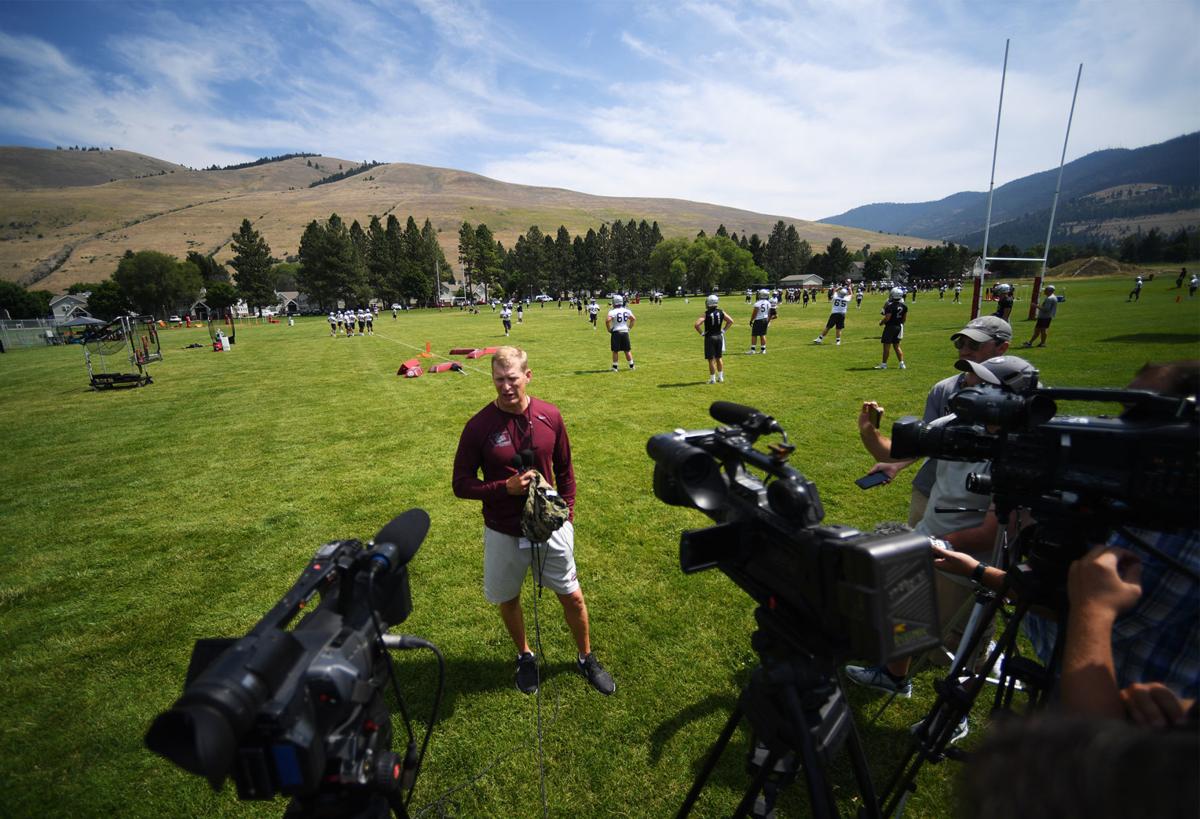 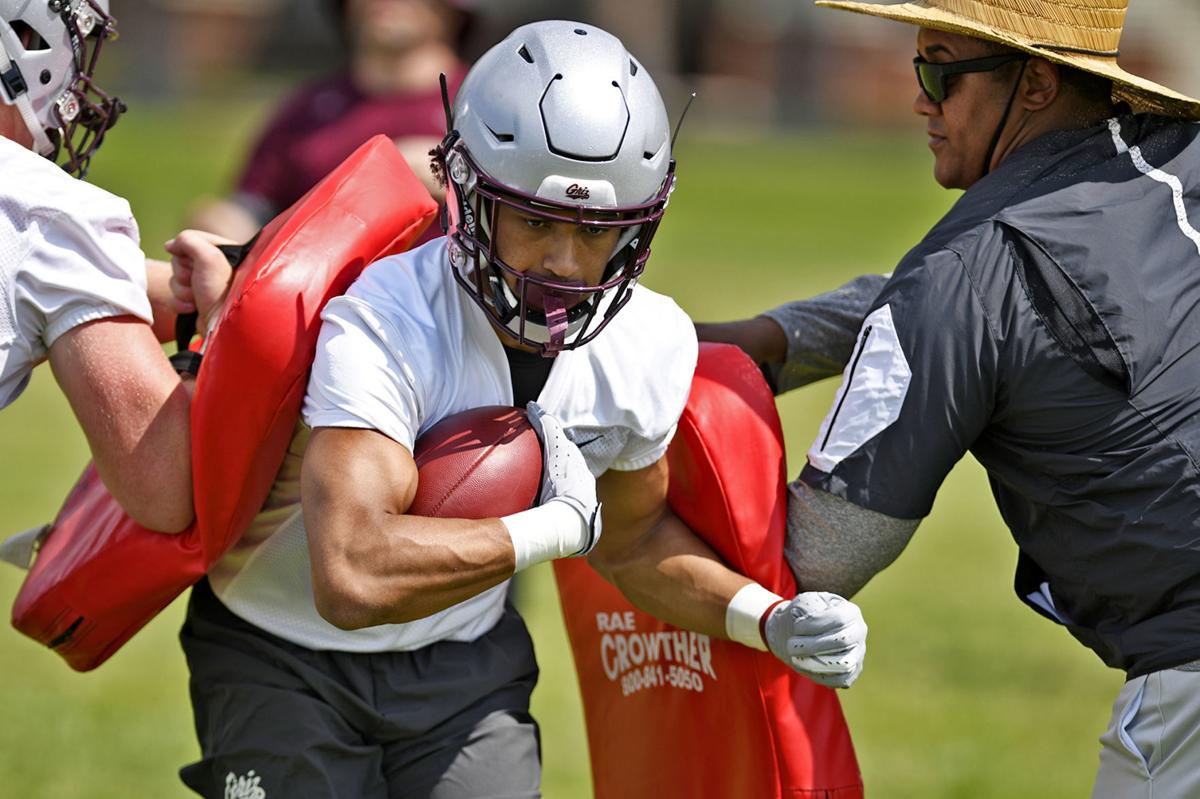 The wide receiver made some eye-popping plays during a 90-degree first day of fall football camp on Tuesday, prompting some fans in attendance at Dornblaser Field to ask who’s No. 8.

That would be Toure, who traded in his No. 82 jersey during the summer as a potential mental boost following a struggling sophomore season.

“I just feel like I needed a change,” Toure said after a practice in which the wide receivers and defensive backs make their share of plays. “I’ve been contemplating changing it ever since I got here, but I never did.

"I just feel like I didn’t have the season I wanted to last year. It’s some superstition with me. I thought it’d be new number, it’s a fresh start. I’m just trying to evolve myself. I felt like that was something that could help me.”

Toure made a good showing in his new jersey on a day in which fresh faces were abound. Of the 108 players on Montana’s roster, 36 got their first taste of college action with the Griz.

Head coach Bobby Hauck said the focus of day one was knocking off the rust. That showed through in the shorts-and-helmet practice with underthrown and overthrown balls, at least one fumble and some struggles running the ball.

“There’s two things that lend to positive and negative (practices), and that’s probably effort and execution,” Hauck said. “The attitude and the effort ought to be a constant.

"Every individual out here, starting with me, is in control of that. The execution part comes and goes. If you come out here and play hard and we execute well, that means we’ve had a good practice.”

Toure, who seemingly got lost in the shuffle last year, appeared to qualify as having a good practice. The 6-foot-3, 190-pound wideout from Portland, Oregon, made a handful of catches over the top of the defense, some against the second- and third-team defense, and came up with a few other highlights.

One was on a swing pass that he took around the corner of the first-team defense and raced down the left sideline for what would’ve been a touchdown before the whistle signaled to move on to the next play. Another came when returning starting cornerback Dareon Nash looked like he was going to pick off a deep pass, but Toure somehow knocked it away and appeared to catch the ball before it hit the ground.

Toure felt the added time and seriousness in the weight room has been paying off since the summer. He lost three pounds.

“My squat and power clean definitely went up, made me more explosive. I can feel it transitioning onto the field,” he said. “I’m definitely stronger than I’ve ever been.

"In high school, I never lifted like that and took lifting seriously. Once I got here, the first couple years, I was feeling it out and getting used to it. Now, I’m getting comfortable, and it’s full speed ahead. I’m hoping that can help take my game to the next level.”

Toure has also taken on a leadership role with Sammy Akem, a second-team all-conference wide receiver, following the graduation of veteran leader Keenan Curran. Senior quarterback Dalton Sneed praised his leadership despite a spring in which the opportunities were far and few between for Toure in a stacked receiving corps.

“All the behind-the-scenes work that no one has seen him do, he’s been working really hard in the weight room, and (player-run practices) and stuff, he’s been killing it,” Sneed said. “It’s just transferring over. It’s nothing really different from him than it has been the past few months.”

It wasn’t all roses for the receivers as the defense made its share of the plays.

Nash got his interception when he picked off Graves. Even sophomore linebacker Marcus Welnel, a Helena Capital grad, got in on the breakups, knocking down a quick inside slant that he nearly picked off with one hand.

Robby Hauck, who also broke up a pass, had high praise for Toure, who was limited to 440 yards receiving, fourth on the team, and two touchdowns last season after tallying 553 yards and five touchdowns as a freshman.

“Shoot, I’ve always thought he’s been a great player,” Robby Hauck said. “He’s definitely a force for us on offense, just like all the other receivers. That’s the good thing about having them being such a strong group on our team is they push us, we push them. It’s the best of both worlds. Each group gets to improve.”

Bobby Hauck mentioned cornerbacks Trevin Gradney and Corbin Walker when asked which true freshmen he has his eye on.

“They’re probably as close to game ready as anybody,” Bobby Hauck said. “Beyond that, you know, it’d be great if somebody surprised us.”

Robby Hauck took notice of them in the defensive backfield.

“They step up to the plate and aren’t afraid of some competition with the older guys. That’s important,” he said. “I think playing corner is the highest-pressure position on the defense just because if you mess up, everybody notices. You don’t get away with many things. They certainly aren’t afraid of that.”

Hart, a redshirt senior, played in seven games in 2016 and seven in 2017. Scott, a redshirt junior who played in five games in 2017, medically retired but will stay on to help the coaching staff. Glacier grads Hartsoch and Morris, Butte alum Morin-Ferguson, and Groff all redshirted as freshmen last season.

Junior cornerback Josh Egbo was a non-participant in Tuesday’s practice. He was wearing a brace on his left leg but was still in shorts and a helmet.

Frank Gogola covers Griz football and prep sports for the Missoulian. Follow him on Twitter @FrankGogola or email him at Frank.Gogola@406mtsports.com.

Montana's Levi Janacaro catches a pass during the Grizzlies' first fall camp practice at Dornblaser Field on Tuesday afternoon. Janacaro, a Missoula Big Sky graduate, moved from fullback to running back for the 2019 season.