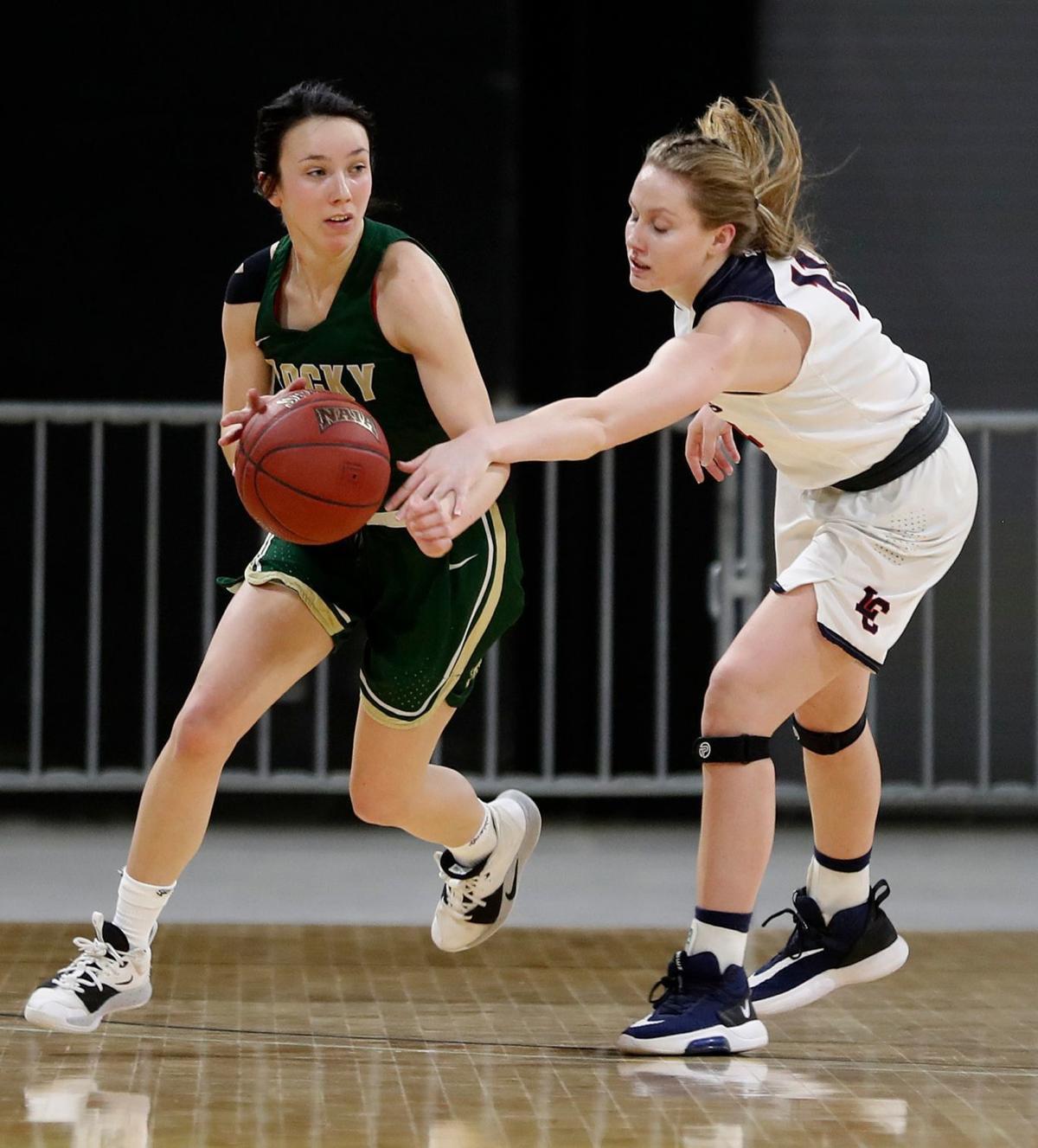 Rocky's Kloie Thatcher dribbles around Lewis-Clark State's Jansen Edmiston on Saturday. Thatcher made a game-winning basket at the buzzer. 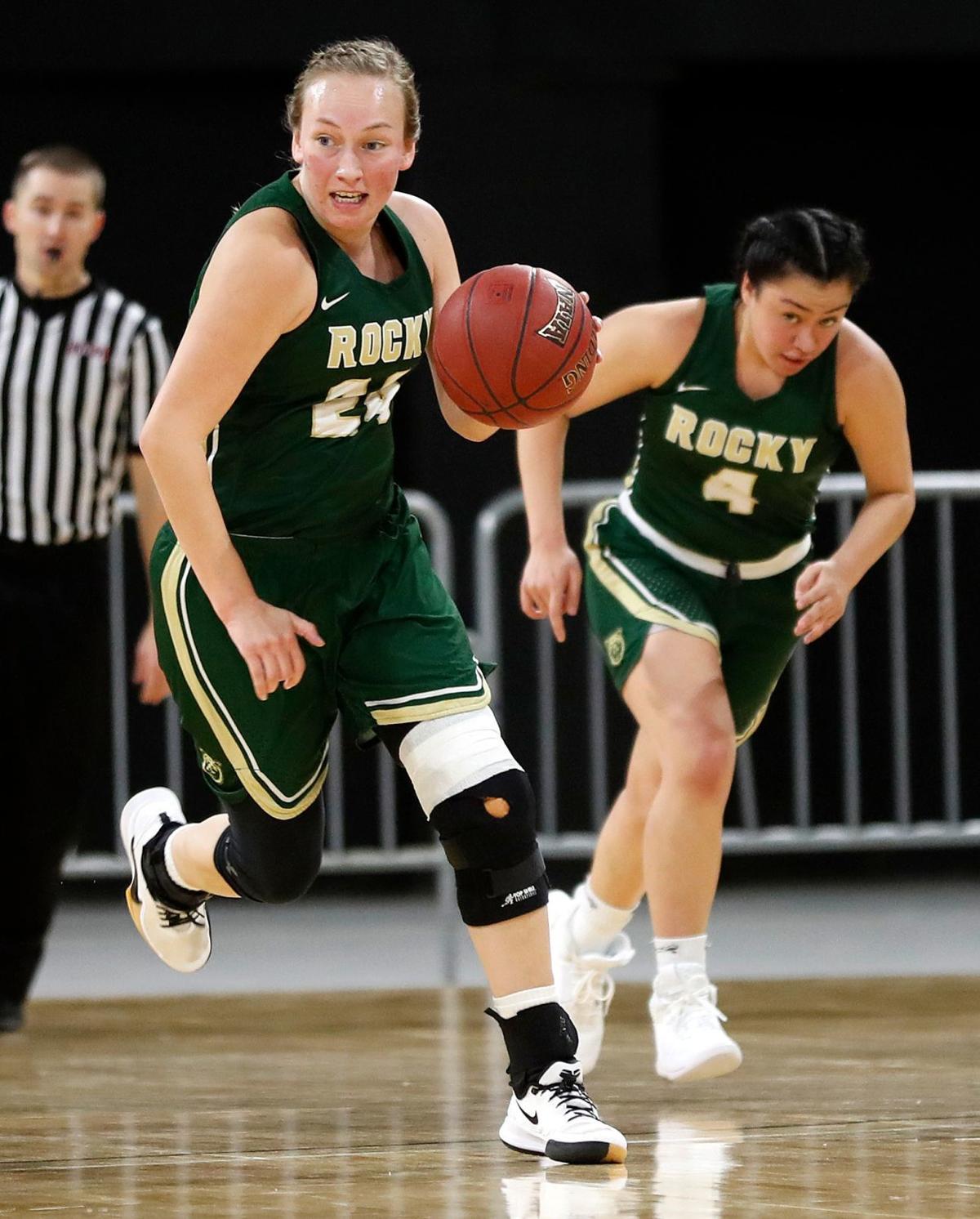 Rocky's Shiloh McCormick drives the ball up the floor during the first half of the game at First Interstate Arena at MetraPark on Saturday.

Rocky's Kloie Thatcher dribbles around Lewis-Clark State's Jansen Edmiston on Saturday. Thatcher made a game-winning basket at the buzzer.

Rocky's Shiloh McCormick drives the ball up the floor during the first half of the game at First Interstate Arena at MetraPark on Saturday.

With time winding down, Thatcher drove left against the defense, got to the basket and scored as the horn sounded. The victory lifted Rocky, which led by as many as 15 points in regulation, to a 12-3 overall record and a 3-1 mark in the Frontier.

Thatcher finished with 19 points and six assists. Markaela Francis also scored 19 points and pulled down a game-high 16 rebounds for the Battlin' Bears.

Teammate Mackenzie Dethman also had a double-double of 17 points and 11 boards.

Travis Yenor's 37-point outburst proved too much for Rocky Mountain College in a 87-57 loss to Lewis-Clark State at First Interstate Arena.

Rocky is scheduled to play its first game on its true home floor Wednesday when it hosts Carroll College at the Fortin Center as part of men's/women's doubleheader.

The Bears have yet to play there this season while a new court was being installed.

PORTLAND, Ore. — Two days after suffering its first Big Sky Conference loss, Montana State's women got back in the win column with a 73-62 victory at Portland State.

Freshman guard Darian White scored 19 points on 9-of-12 shooting and backcourt mate Tori Martell filled in for the injured Oliana Squires to score 13 points as the Bobcats improved to 9-6 overall and to 5-1 in the Big Sky standings.

MSU lost 69-68 in double overtime at home on Thursday to Idaho.

White and Martell combined for 12 rebounds. Squires sat out due to an ankle injury, according to the MSU sports information office.

Montana State's Martha Kuderer went 3 for 3 from the 3-point arc and finished with 18 points. Martell also made three 3s.

MSU's Harald Frey, whose shot with 12 seconds left gave the Bobcats a one-point lead, misfired on a half-court shot at the buzzer.

Frey finished with 26 points while Woods had 30. Frey and Woods went back and forth down the stretch of a game that featured eight ties and 20 lead changes.

It was MSU's second consecutive nail-biter. On Thursday, the Bobcats prevailed 71-68 on the road at Idaho.

Amin Adamu had 20 points for Montana State while Jubrile Belo and Mychael Paulo each added 10.

Sal Nuhu scored 12 points for Portland State, which improved to 8-9 overall and to 2-3 in the Big Sky Standings. The Bobcats dipped to 9-8 overall and 3-3 in the league.

MONMOUTH, Ore. — Jeanann Lemelin hit three 3-pointers and scored a team-high 17 points but Montana State Billings faltered on the road in a 64-56 loss at Western Oregon.

The Yellowjackets shot just 29.5 percent from the floor (18 of 61) and were outrebounded 46-36. Lemelin was the only player to reach double digits in points for MSUB.

WOU’s Shariah Green led all players with 21 points while making 8 of 12 from the field. Keyonna Jones added 15 points. Green and Jones both came off the bench to propel the Wolves.

MSU Billings (8-7, 3-3 GNAC) split its road trip in Oregon over the weekend. The Yellowjackets defeated Concordia 66-58 in Portland on Thursday.

Western Oregon (5-8, 2-4 GNAC) is now one game behind sixth-place MSUB in the conference standings.

Tyler Green hit a 3-pointer from just past half court with one second remaining in overtime to lift MSUB's men to a 92-91 victory over Central Washington at Alterowitz Gym.

The Yellowjackets trailed 91-86 before Psalm Maduakor connected on a 3 with six seconds left to make it a one possession game. MSUB was forced to foul, and Central Washington's Matt Poquette missed both ends of double-bonus free throws.

MSUB's Jordan Lehrer cleared the rebound and passed the ball to Green for the last-second heroics.

Chrishon Dixon scored a career-high 22 points for the Yellowjackets. Zharon Richmond also had 22 before fouling out, which helped offset a 29-point night by CWU's Woody Tariq.

Brendan Howard added 21 for the Jackets. Dixon also had five rebounds and five assists and hit four of MSUB's 12 3-pointers.

The Cowgirls were led offensively by senior Taylor Rusk, who scored a season-high 16 points on an efficient 6-of-9 shooting. Rusk also had four assists and three steals. For Rusk, it is the third game in a row reaching double-figures and the sixth time this season.

LARAMIE, Wyo. — Wyoming lost a seven-point lead in the final 1:25 of regulation before losing its fourth straight game with a 78-69 setback to UNLV in overtime at the Arena-Auditorium. It’s the seventh straight loss for the Cowboys against Mountain West competition dating back to last season.

True freshman Kwane Marble II paced Wyoming with a career-high 19 points while Jake Hendricks and Hunter Maldonado added 18 and 16, respectively, but the Runnin’ Rebels outscored the Cowboys 15-6 in extra time and never trailed after regulation.

Bryce Hamilton led UNLV with 19 points while Jonah Antonio chipped in 15 for the Runnin’ Rebels, who shot 50 percent from the field in the second half and nearly 70 percent (23 of 33) from the free-throw line.

Check out the results of area college basketball games.