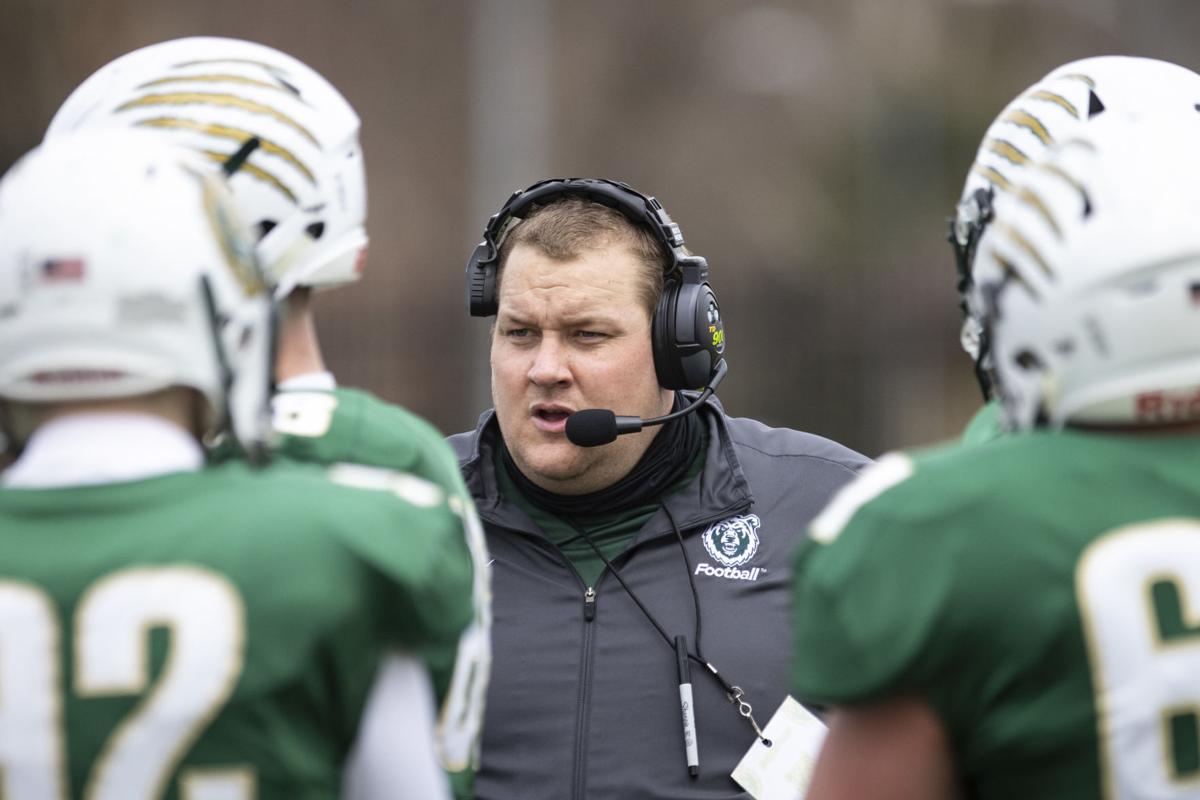 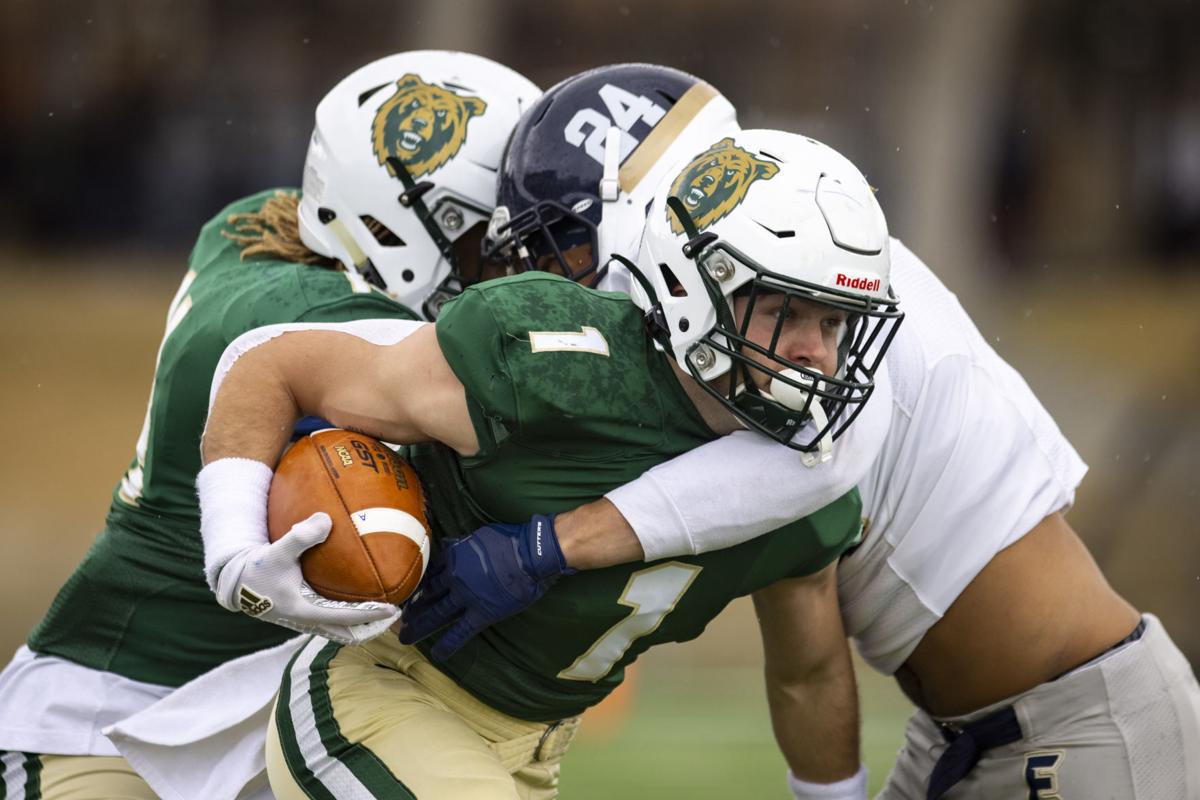 Rocky running back Dawson Schick is met by Eastern Oregon's Quincy Backes on March 27 at Herb Klindt Field in Billings.

BILLINGS — All abnormalities and aberrations aside, Rocky Mountain College football coach Chris Stutzriem’s biggest takeaway from the spring football season was that his team improved in the long run.

Sure, there were injuries. Yeah, there were agonizing losses. But there were no apprehensions about competing in the Frontier Conference’s condensed four-game schedule, regardless if some on the outside looking in may have viewed it as forced or contrived.

The consensus at Rocky? It was well worth the effort.

“It wasn’t showing on the scoreboard exactly, but I know and our team knows we got better. That’s all we can ask for. They had great attitudes every day. I didn’t feel like after any practices guys were thinking, ‘That was a waste,’ or ‘What are we doing?’ I felt really good about that stuff. And that’s a testament to the leadership on our team. It was just good to get back out there and play football.”

The abbreviated season, patched together to make up for the pandemic-halted 2020 fall campaign, saw Rocky go 1-3. The Battlin’ Bears rallied to win their finale last Saturday on the road at Montana State-Northern by a 24-21 score, a game in which they put up 17 second-half points, including 10 in the fourth quarter.

The winning points were scored on a 40-yard field goal by placekicker Riley Garrett, which helped ease some of the sting from the three previous losses the team suffered by a combined 12 points — a two-point defeat against Carroll, a seven-point setback to the College of Idaho and a three-point loss in overtime versus Eastern Oregon.

The theme of finishing games was important for Rocky as the schedule wore on, and the team was able to do that against Northern.

“It was cool to come back this semester and game plan for somebody else,” Stutzriem said. “Obviously I would’ve loved to have had more success and be better than what we were, but in 2019 we had four or five games of getting blown out. It was bad. It was ugly. But now we’re right there against those same teams.”

“Our guys were awesome,” the coach added. “We went four weeks in a row without a positive COVID test. That tells me a lot about our culture, that guys are buying into it and believing it, that they’re doing what they’re supposed to. That was good to see.”

And though they have been afforded another year of eligibility because of COVID-19’s impact, all are moving on with life after football.

With Korf departing, the quarterback situation will take on a bit of a new look in the fall. Veteran Nate Dick, a Billings Senior product who has been oft-injured, was lost to a foot ailment in Rocky’s first game against Carroll and was out for the remainder of the schedule. Stutzriem, though, said he expects Dick to be back and in contention for the job next season.

“It’s been a tough three years for him,” Stutzriem said. “He’s so good in the weight room and he’s a great leader, but I know it’s been tough on him. But he responds every year and he comes back stronger. I expect him fully to be healthy.”

QBs Matt Asplund and Jonathan Morris, the latter of which got some reps against MSU-Northern last week, are expected back, and the coaching staff is enthused about incoming freshmen J.T. Allen of Kalispell Glacier and Brock Mast from Arizona.

As for the rest of the team, Stutzriem can see the vision he implemented when he was hired 2½ years ago beginning to take shape.

“Guys are starting to see that they can have success. Is it working? I hope so,” Stutzriem said. “You start hearing the same things you talk about as a coach, you’re hearing the players talk about it and you’re seeing them do it. So that’s big.

“We’ve just got to believe we can go out and do it. Deep down inside do we know we’re going to go out and win every football game? I think that’s the next step, is to be able to say, ‘Am I able to follow through with it?’

“I think we’re at the point now where we’re telling ourselves and we’re starting to believe it. Now we need to actually get it done and fully believe it.”

Stutzriem said Rocky will begin voluntary workouts in May, which will continue at varying intervals and structure during the summer. The team will report for fall camp Aug. 3 and conduct its first practice on Aug. 5.

The 2021 10-game regular-season schedule, provided by Stutzriem, is made up only of conference games. The schedule is as follows:

The Argos and Battlin' Bears will advance to Iowa if they win Saturday.

BILLINGS — Mei-Li Stevens and George Beddow of Rocky Mountain College have qualified to compete in the marathon at the NAIA Championships, set for Gulf Shores, Alabama, May 26-28.

Rocky running back Dawson Schick is met by Eastern Oregon's Quincy Backes on March 27 at Herb Klindt Field in Billings.