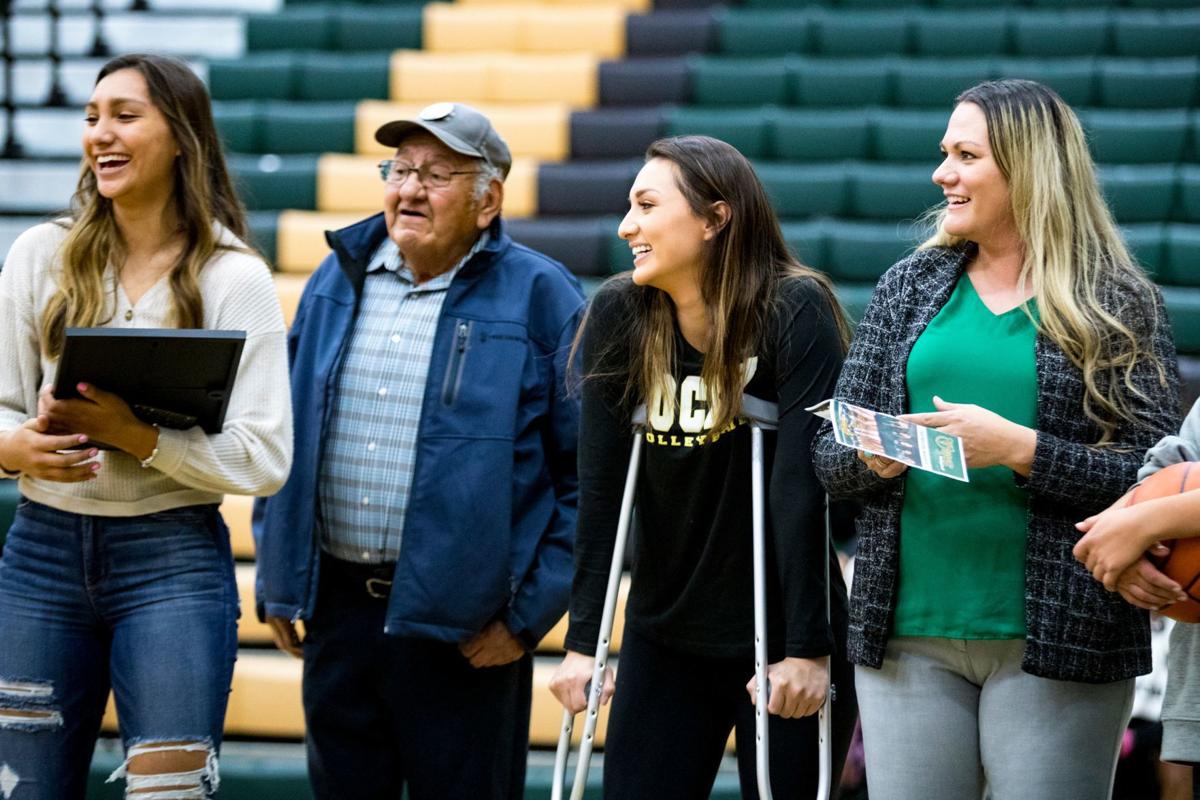 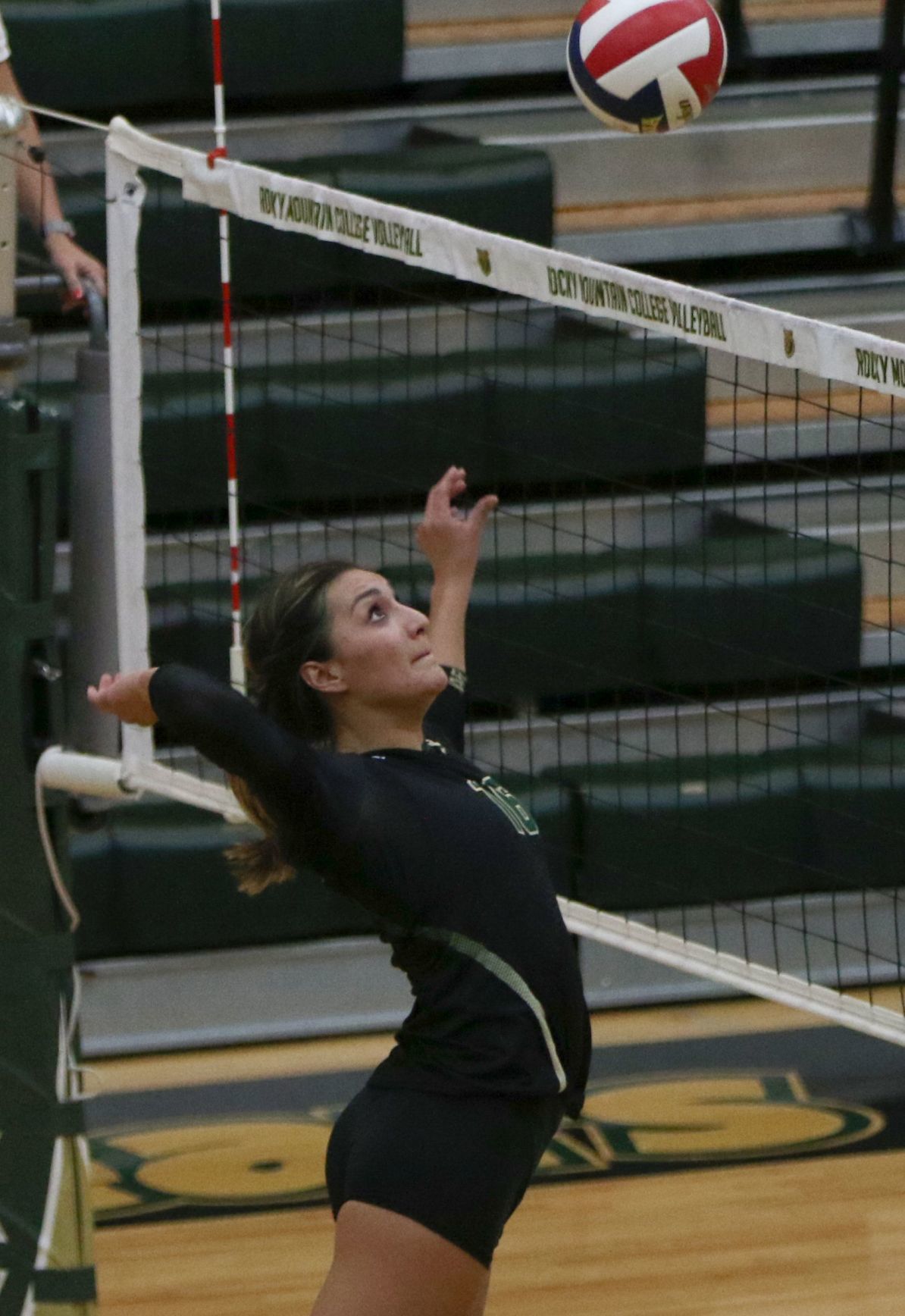 Naomi Bad Bear goes up for a kill for Rocky Mountain College. 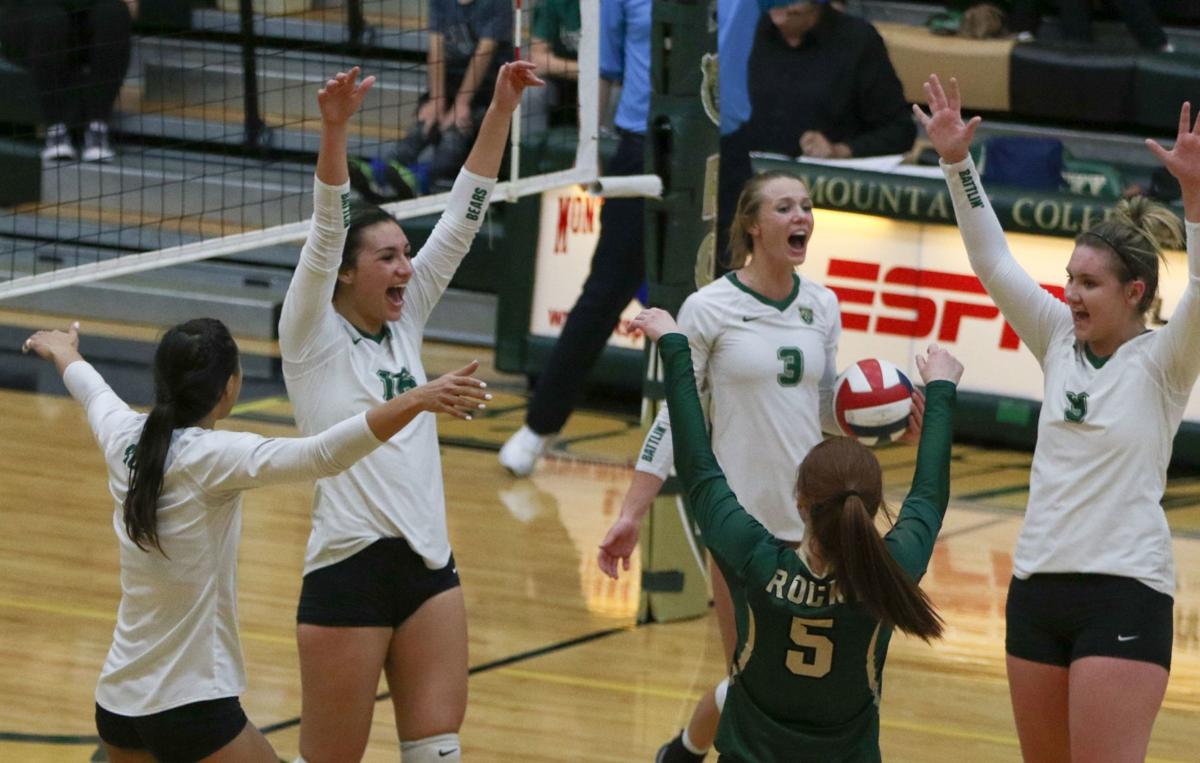 Naomi Bad Bear, second from left, celebrates a point with her Rocky teammates. 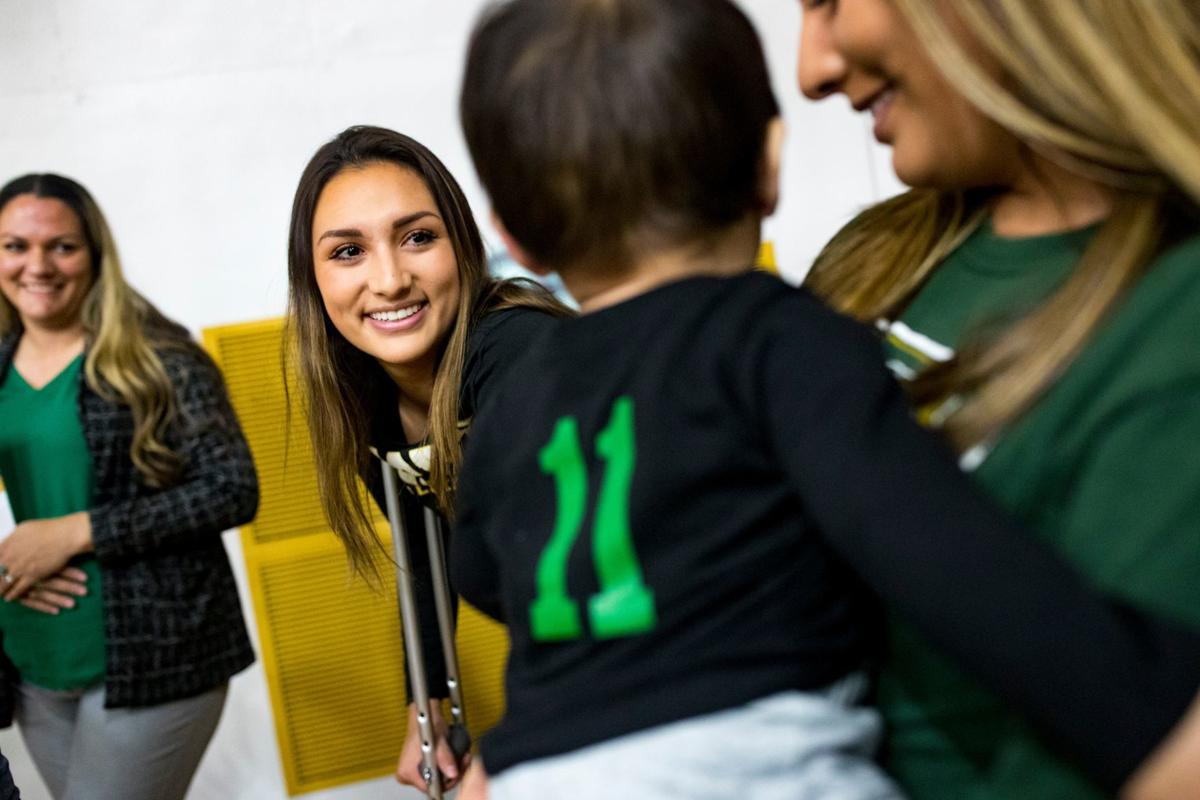 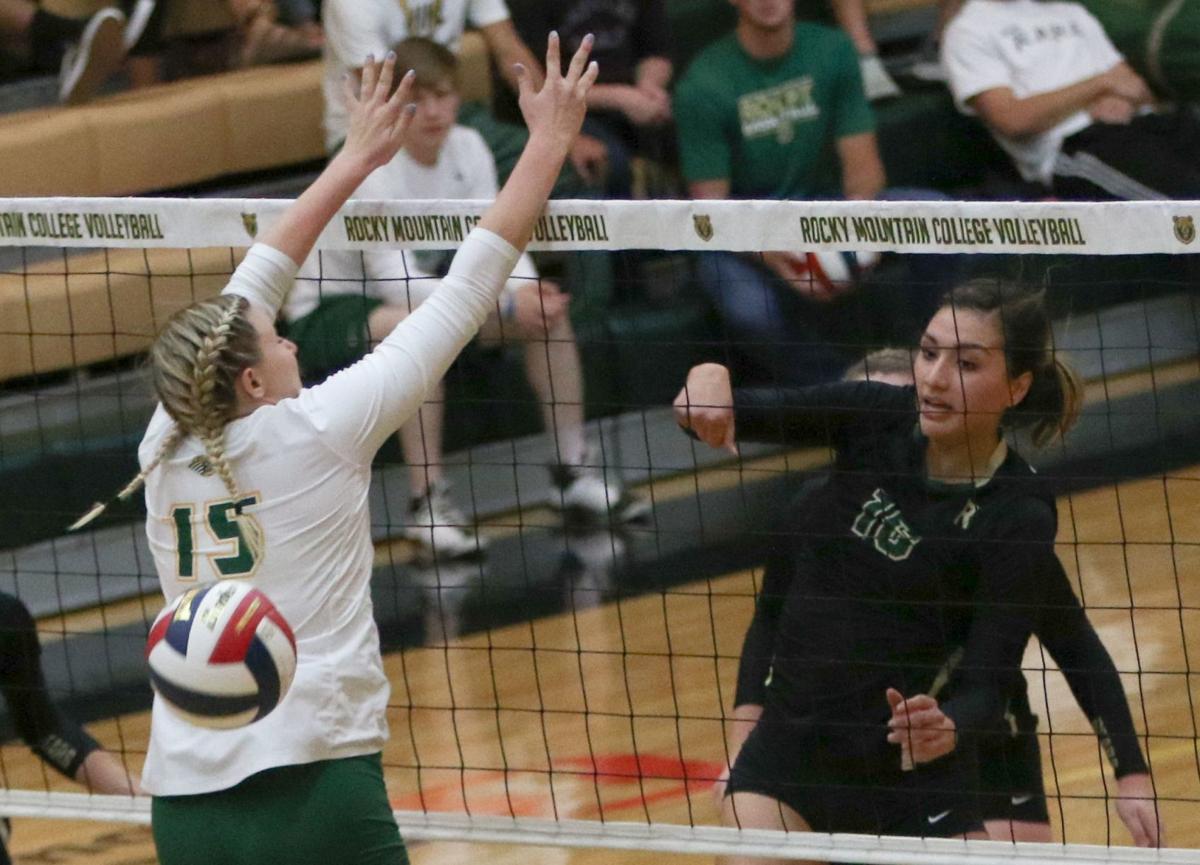 Naomi Bad Bear, right, a Billings Senior graduate, was one of Rocky Mountain College's top hitters and also ranked among the top blockers in the nation in the NAIA. 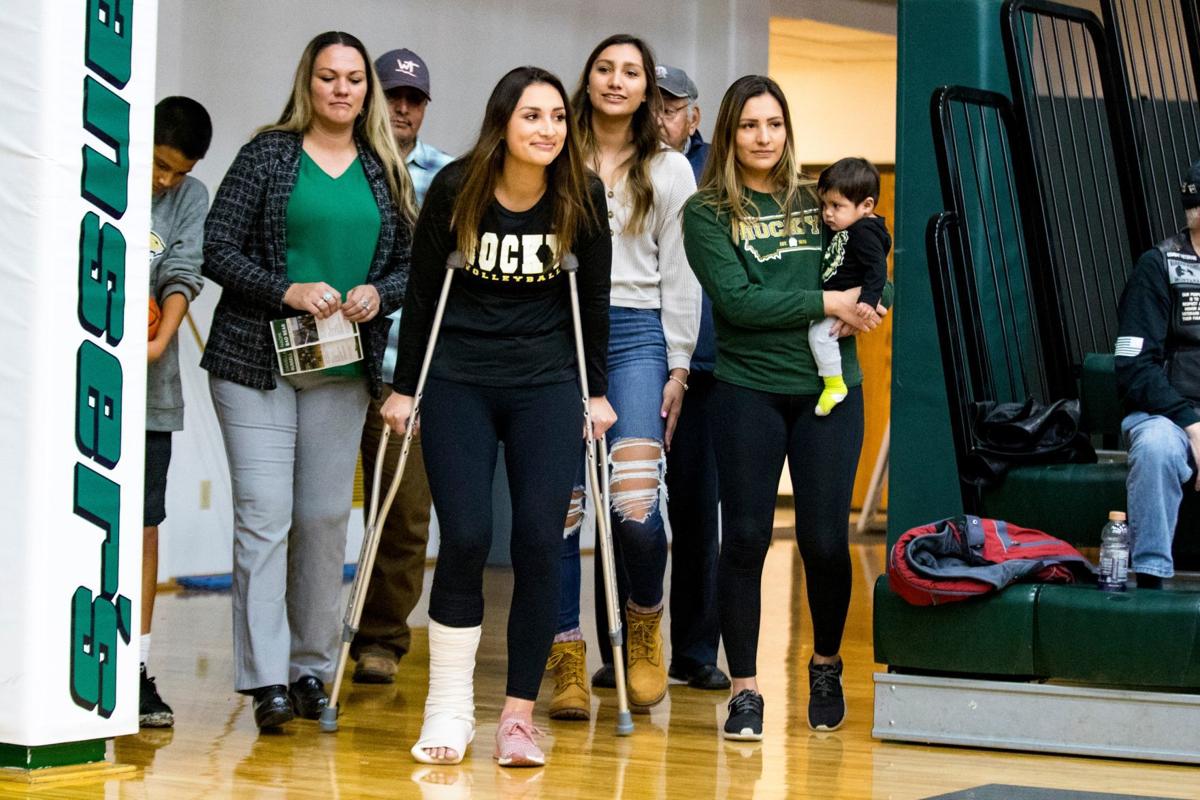 BILLINGS — When Naomi Bad Bear hobbled to midcourt at Rocky Mountain College’s Fortin Center on Saturday night, leaning on crutches and resisting tears, the senior from Billings was far from alone.

Escorting her, of course, were her parents, Curt and Nadia, each grappling with emotions in their own way as they reflected on their daughter’s remarkable journey and the magnitude of this moment — and an even larger benchmark looming in May. Also in the on-court entourage on Senior Night for Rocky volleyball were her younger sisters, Kola and Courtney; others watched from the bleachers.

And there in spirit, from near and far, were hundreds if not thousands of others in her blood family and her larger Crow, Sioux and Northern Cheyenne families. Among them were Crow basketball legends Larry Pretty Weasel and Jonathan Takes Enemy, great uncles both who had pursued similar athletic and academic dreams on this very same floor and on these very same grounds, only to land on another path.

“The first in our family,” Curt had earlier said of Naomi’s impending college degree, in exercise science. “And it’s setting a standard for the younger siblings, the sisters and little brothers that are coming up, and for our reservation.”

“Proud is the only word I can say,” Nadia added in summation, wiping a misty eye. “Just very, very proud.”

The tears rose from a deep reservoir of reflection. After all, it’s remarkable that Naomi even survived to cherish this moment.

In August 2011, when the family was living in Pryor and she was preparing to enter eighth grade, Naomi was suddenly overcome by a searing headache and massive vomiting, requiring an emergency airlift to Denver. An MRI revealed a large blood clot near Naomi’s jugular vein and three major sinuses.

Doctors braced Curt and Nadia for the worst.

When the diagnosis — Cerebral Sinus Venous Thrombosis — came back, doctors marveled that Naomi hadn't suffered a massive aneurysm or stroke, if not lethal at least permanently debilitating.

Instead, she was sitting up in her bed when they arrived at her hospital room to report the news.

“A miracle,” they called her, before giving her a nevertheless dire prognosis on another level: she’d never play contact sports again.

Eschewing surgery, doctors instead started her on blood-thinners. For weeks, though, she couldn’t talk, moved around the house on a walker, and was monitored daily by stroke and neurology specialists, a speech pathologist and counselors.

Did we say miracle?

Eight weeks after her flight to Denver, doctors reported with equal awe that the clot had vanished. A month after that, Naomi was given a green light for contact sports — which, after the family's move to Billings, she parlayed into a standout career at Senior High and a volleyball scholarship.

Today, the family simply refers to those terrifying days as “the stroke.”

Asked how the stroke has informed her life since, Naomi glances down at her wrapped right ankle. A tall and lean middle blocker, and one of the NAIA’s leaders in blocks a year ago, she landed awkwardly on the ankle early in the year, tried to play through it for two months, and finally succumbed to the wobbly joint's realities.

A week ago, she had surgery to repair ruptured ligaments and a tendon.

“What I’ve gone through and what I’ve had to work back from … I’ll rehab from this,” Naomi said. “There’s worse things going on in the world.”

At first, given sports’ role in her life, Nadia worried how the final derailing of her career might impact her emotionally.

“Mom,” Naomi assured her, “I’m at the end of my journey in my athletic career and I’m ready to start my next chapter.”

That chapter begins with a degree in exercise science come May. After that: occupational therapy in graduate school — at Rocky, of course, because of proximity to family.

“Because I went through a lot of therapy before,” she explained. “The way those people changed my life … I hope to change someone’s life that way.”

Turns out Naomi already has been changing lives. She saw that first-hand when a bus from her old school, St. Charles Mission in Pryor, showed up at Rocky with a gaggle of volleyball players to see her play.

Little did she know that on the reservation — where basketball and cross country are king — she was inspiring girls to play volleyball.

It was a reminder of what she represents.

“It’s always in the back of my head,” she said. “It’s just being a good role model for my tribe to know there’s more out there, they don’t have to stay on the reservation, they can come off and do what they want just so long as they work hard.

“I hope I do set the example not only for my tribe but also for other little girls to work hard and achieve whatever you want.”

Said Nadia: “She’s gone above and beyond. There’s a lot of (tribal) athletes good enough to go on and play, but academically weren’t able to do it. But she’s able to do it."

The ethic was instilled and modeled by Curt, who spent two years at United Tribes Technical College in Bismarck, North Dakota, and works long hours as a maintenance contractor for Weld Tech at the Cenex plant in Laurel, and Nadia, who’s held down a job at the post office in south Billings, runs the home many evenings and has directed traffic to sporting events.

The standards, as Curt calls them, filter to their five children. The expectation from the get-go was that all five attend college and earn scholarships to get there, whether athletic or academic; Courtney earned a volleyball scholarship to Montana Tech and Kola a basketball ride to Montana State.

“Goals are just a finish line but standards are an every-day thing,” Curt said. “You do what it takes. And she (Naomi) did that even though she had to go through stuff she had to overcome.”

Asked its genesis, Nadia quickly responded, “She got it from me!”, and all three laugh.

To which Curt interjected, again to laughter as he nodded at Nadia, "And she was smart enough to marry me!”

Said Naomi: “I’m thankful for my parents, because I was never expected (to be) anything less.”

That Saturday marked the emotional closure of one of her passionate pursuits wasn't lost on the three. Like her mom, Naomi had to gather herself as she reflected on the moment.

“It’s pretty emotional because this is, like, it for me,” she said, herself wiping a tear. “It’s definitely bittersweet because sports have helped me so much throughout the years.”

One thing was for sure, though: As always, she wasn't alone, either in person or in spirit.

The Battlin' Bears were honored with the American Volleyball Coaches Association Academic Award for the 13th consecutive year.

BILLINGS — Rocky Mountain College's Kaelyn Volk was selected as the Frontier Conference women's golfer of the week on Monday.

Naomi Bad Bear goes up for a kill for Rocky Mountain College.

Naomi Bad Bear, second from left, celebrates a point with her Rocky teammates.

Naomi Bad Bear, right, a Billings Senior graduate, was one of Rocky Mountain College's top hitters and also ranked among the top blockers in the nation in the NAIA.