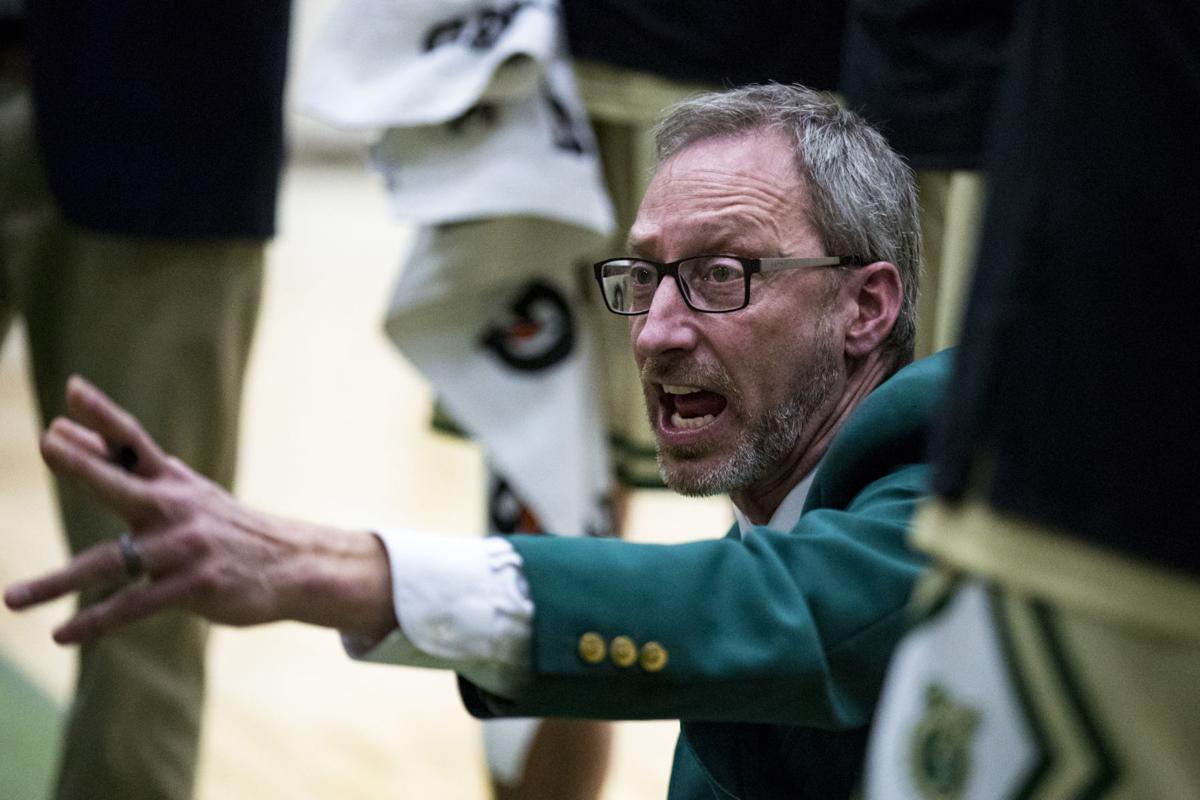 Rocky men's basketball coach Bill Dreikosen instructs the team during a timeout in a game against Carroll College last season. 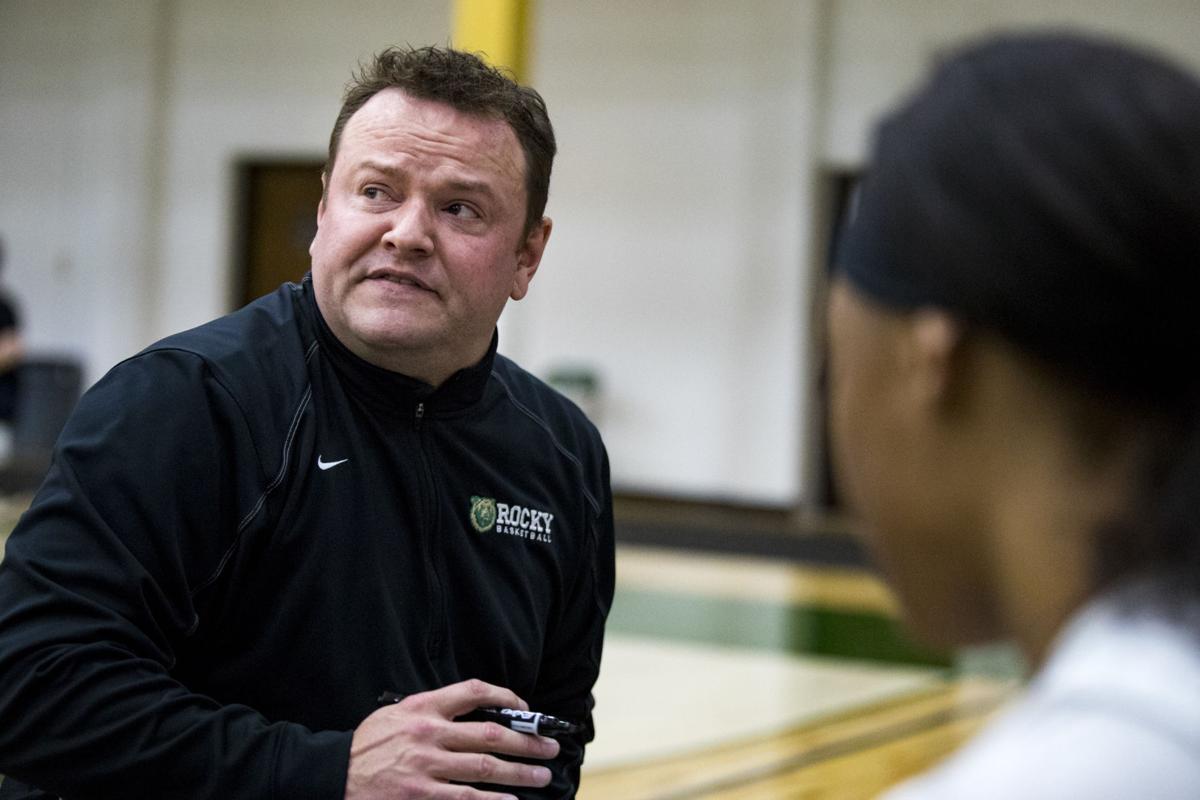 Rocky women's basketball coach Wes Keller speaks to his players during a game at the Fortin Center in Billings last January.

BILLINGS — The effort to put together a workable Frontier Conference basketball schedule for the 2020-21 season took “a great degree of creativity and flexibility,” as described by league commissioner Kent Paulson.

Of course, that could pale in comparison to what it might take to actually pull it off considering the havoc the coronavirus pandemic continues to wreak on athletic competition at every level.

But at least there’s a measure of clarity for the 12 Frontier teams hoping to play hoops this winter.

At Rocky Mountain College, men’s coach Bill Dreikosen and women’s coach Wes Keller have Dec. 5 circled on their respective calendars. That’s when the Frontier season is set to tip off following the release of the league-wide schedule last week.

“It’s what we would all call a moving document,” Dreikosen told The Billings Gazette and 406mtsports.com. “Basketball, from an inside venue standpoint, is going to be the first sport tested. There’s a lot yet to be determined what that’s going to look like, what the protocols are going to be.

“But it’s nice to have something down on paper that you can work from.”

The conference schedule, which will consist of 20 games per school, has a much different look this year, with teams slated to face one another in back-to-back games each week.

It’s a throwback to a format the league employed in the late 1990s, Paulson said, and makes sense in order to limit travel in the age of COVID-19.

“We pulled one out of the old file. It takes us back to the old days of playing back-to-back at the same location,” Paulson said. “But you do what you’ve got to do.

“I think our student-athletes — in fact I know they do — appreciate the idea that we’re a forward-thinking group and we're trying to put the very best product before them that they can have a positive experience. We’re going to get through this one way or another.”

Neither Dreikosen nor Keller thinks it’s an ideal way to play the season, but it’s the most realistic strategy.

Rocky’s teams are scheduled to host MSU-Northern on Dec. 5-6 at the Fortin Center. The regular season will end the weekend of Feb. 21, followed by a playoff-style conference tournament with games being played at the campus sites of the higher seeds beginning the following week.

Last season was abruptly halted in March before the NAIA national tournaments could be played.

“I think it’s the best viable option to ensure teams in our league are able to get games,” Keller said. “It’s the best of a messed up situation.

“But you just do everything you can. You’ve just got to be able to adjust and be adaptable right now and value the time that you have together and can be on the court. I just don’t know where this thing is going to go. I don’t think anybody does.”

Both Dreikosen and Keller said they hope to finalize at least some nonconference games to be played in the coming weeks. Teams across the Frontier are expected to do the same, perhaps some more than others.

Paulson said that while the mechanics of the schedule-making have come together, he can’t predict how smoothly it will all go.

The commissioner noted the potential for the standings being unbalanced at the end of the regular season, and that winning percentage could be the determining factor rather than straight up wins and losses.

The Frontier was forced to postpone its football and volleyball seasons until the spring, but has been able to conduct some cross country meets and complete its fall golf tournaments.

“We’re probably going to have to change as we go along. We’re at the mercy of the unknown,” Paulson said of the basketball schedule. “But it’s really important for everybody that we keep grinding away and we keep putting out in front of us what we’d like it to be.

“Of course we’re always going to put the safety of the student-athletes first and foremost and we’ll adjust from there.”

Paulson agreed with Dreikosen about the basketball season being a real test for the league when it comes to starting and finishing as planned with coronavirus raging on.

But the league is not short on optimism.

“There’s no doubt there will be more challenges for the indoor sports,” Paulson said. “We better all realize that we just have to be flexible. If we can just get the kids competing and experiencing what they signed up for, we’re confident that the other detail pieces can be worked out.”

Stutzriem played for the venerable Glenn at Wyoming in 2008 and served on his staff at South Dakota in 2013.

The Battlin' Bears conducted the first of 12 scheduled October practices Tuesday in Billings.

Rocky men's basketball coach Bill Dreikosen instructs the team during a timeout in a game against Carroll College last season.

Rocky women's basketball coach Wes Keller speaks to his players during a game at the Fortin Center in Billings last January.