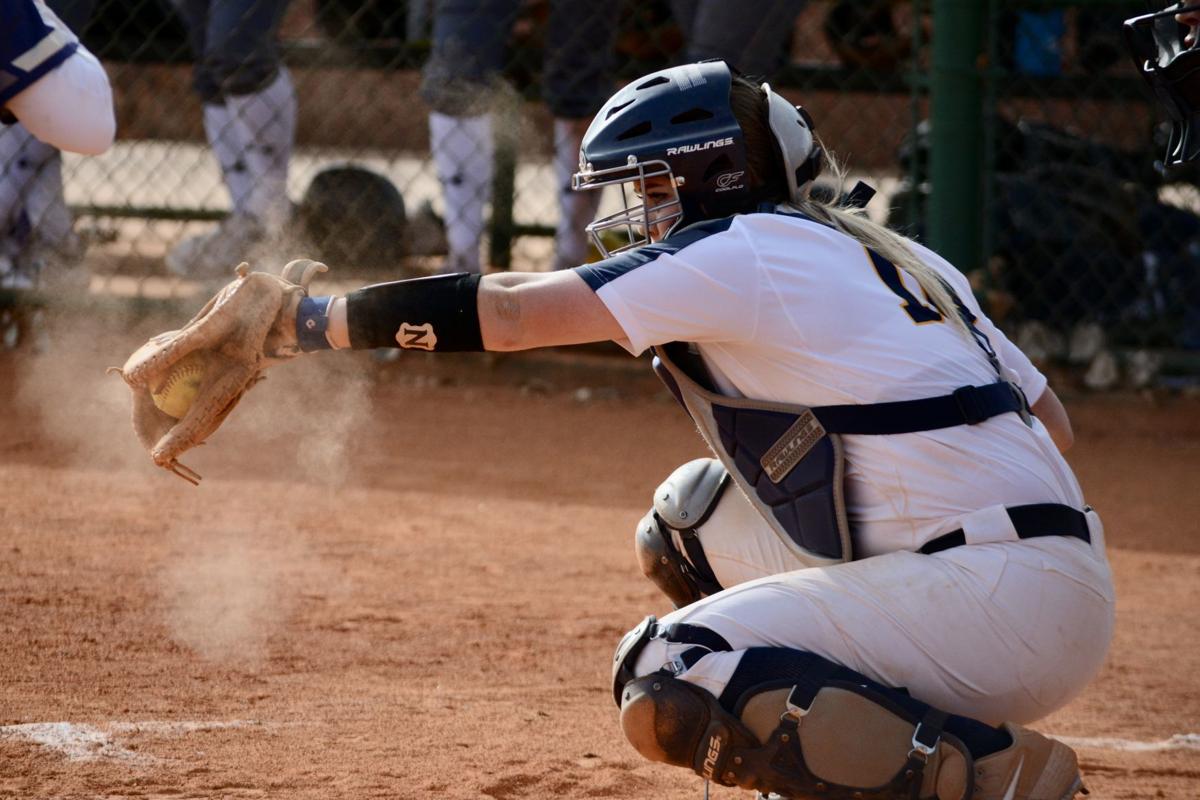 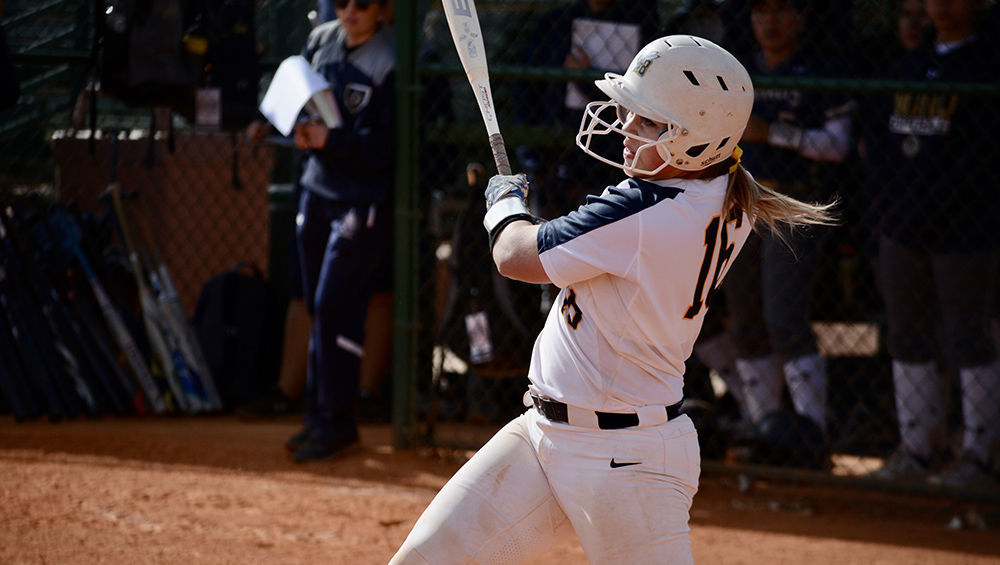 This past season for the Yellowjackets, Taylor Anderson batted .308 in 15 games. She also finished fourth on the team with 10 runs batted in. 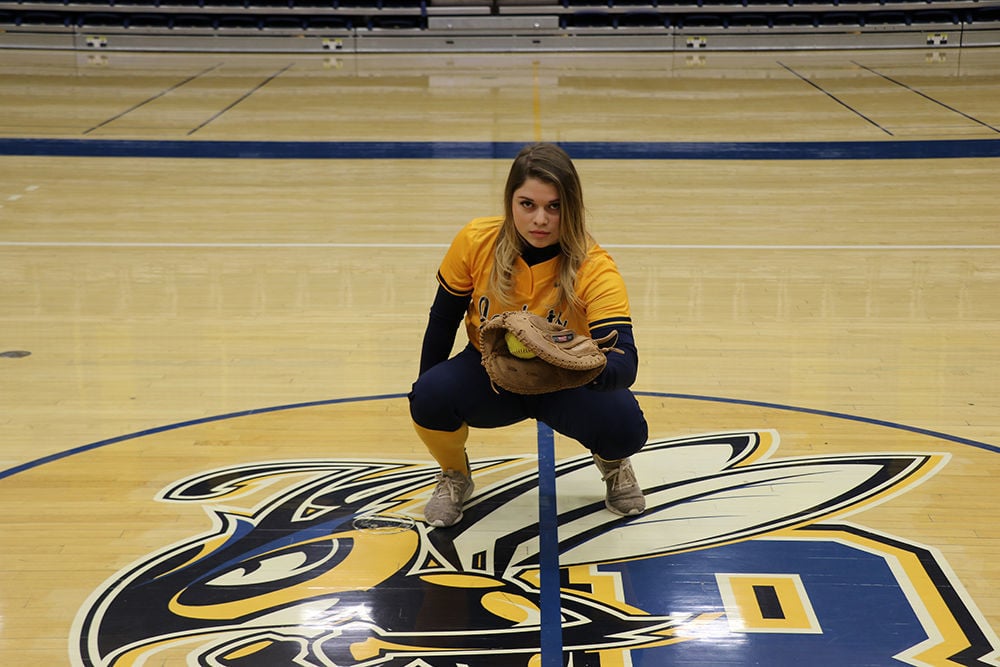 Taylor Anderson, who was diagnosed with Type 1 diabetes at age 4, is looking forward to next season after the Montana State Billings Yellowjackets' softball schedule was cut short due to the coronavirus pandemic.

BILLINGS — Montana State University Billings catcher Taylor Anderson has found success at every level of softball, but her real super power is a steadfast determination to conquer any obstacle that stands in her way.

Currently she is simultaneously managing Type 1 diabetes, playing a collegiate sport, and working towards a degree in health and human performance.

“Even though I’ve never actually played softball with another athlete with Type 1 diabetes that I am aware of, I never considered that it was something that would keep me from doing,” Anderson said.

Playing Division II softball doubleheaders while managing her blood sugar levels is no small feat, but her passion for the game is what fans see on the field. Some might consider diabetes to be a disability, but Anderson refuses to believe it and continues to compete at a high level. She posted the fourth best batting average on the team in her first season with the Yellowjackets in the spring.

Anderson’s softball career began at a very young age. With the support and encouragement of her parents Debby and Jeff, her younger brother Parker, and her grandparents Judy and Jerry, she started out in T-ball. When she turned 8 years old, her coach suggested trying on the catching equipment for the first time. After that, she was completely hooked on the sport.

Anderson grew up in Maple Valley, Washington, and attended Tacoma High School, where she collected numerous accolades for her hitting and fielding prowess. In 2015, she helped her team to the 4A State Championship. In 2017, she was named team and league MVP. Anderson played in tournaments around the western United States, including Colorado and California. It was at these tournaments that she began to draw interest from college coaches.

“I met a college coach in Colorado that started asking me about the possibility of playing beyond high school,” said Anderson. “After that, I knew I wanted to keep playing.”

A strong student, Anderson set her sights toward college. She posted a .625 batting average as a senior at Tacoma and subsequently chose North Idaho College to continue her athletic career. Anderson hit .418 in her first season with nine doubles, three triples, and just one error in 163 total innings. She also led the Cardinals to the Northwest Athletic Conference championship as the team rattled off 23 straight victories. The following year, she marked another strong effort and with six home runs and 36 RBIS, and helped North Idaho College to another NWAC championship.

With a desire to keep playing and studying, Anderson transferred to MSUB to pursue her degree in health and human performance and quickly proved she belonged. She appeared in 15 games with 13 starts at a mixture of catcher and designated hitter and connected for three multi-hit games with a .308 batting average. She also finished fourth on the team with 10 runs batted in and recorded five putouts on Jan. 31 against Academy of Art.

“Taylor is an exceptional teammate and a very positive person to have on our team,” said MSUB coach Lisa McKinney. “Her perseverance to keep playing softball through all her challenges is really admirable and she is always willing to do whatever it takes to achieve her goals. Regardless of what happens in the future, she has already achieved a lot.”

Her positive momentum, and the Yellowjackets’ season, came to a swift halt on March 16, when the COVID-19 global health crisis shuttered collegiate sports across the country. MSUB finished the year 8-15. The softball team had just completed a series at Western Oregon University and faced a 14-day recommended quarantine upon landing in Billings as a precautionary measure.

“It was heartbreaking to have the first year with my new team cut short,” Anderson said. “I felt we had a lot of potential and I was really happy with our team chemistry.”

Due to her Type 1 diabetes, Anderson’s game day routine includes a lot more checklist items than the average student-athlete. Anderson was diagnosed at the age of 4 and thanks to her mother’s quick action, she avoided some of the most severe symptoms and was eventually released from the hospital. Anderson now understands how her body responds to her daily activities.

“Typically, I wear an insulin pump but I am not allowed to have it during a game, which can be hard during long doubleheaders,” Anderson said. “Luckily, I have a good idea of how my body is feeling at any point, so if I prepare and do a good job of regulating during games, I am able to keep the focus completely on softball.”

Anderson has to keep track of everything she eats and drinks, requiring her to have an impressive amount of attention to detail. When the team is on the road, she is busy monitoring carbohydrates at every stop. She does not shy away from talking about the disease and enjoys using the opportunity to educate people and bring awareness to the cause. She hopes to be an inspiration to other young softball players with Type 1 diabetes who hope to play at the college level.

“I think it’s important to have role models out there who have your experience and see what is possible,” Anderson said.

Anderson said her Yellowjackets teammates have been supportive.

“I love when my teammates ask me questions about it because sharing my story is something I am really passionate about,” she said. “There are times where I have to take breaks during conditioning and other drills and it can be hard because I never want to let my teammates down. I’m thankful that everyone on my team has been supportive and so it has never been an issue. Those who know me best can even tell sometimes when my blood sugars get off, and they always let me know and are there to help.”

Anderson is currently working on her undergraduate degree at MSU Billings, then plans to chase her master’s degree at Montana State University after her collegiate athletic career ends. The program typically takes two years to complete. She intends to work in endocrinology and help kids first diagnosed with diabetes to develop meal plans based on how their bodies react to different foods.

In the meantime, she wants to get to know her MSUB teammates better and translate her winning experience at North Idaho College over to the Yellowjackets.

“Next year I want to come in and play the way I know how and help the team,” Anderson said. “I am really excited to get back at it next spring and compete for a spot in the GNAC (Great Northwest Athletic Conference) championships.”

Charlie Snelson is the Assistant Director of Communications in the Department of Intercollegiate Athletics at Montana State Billings.

This past season for the Yellowjackets, Taylor Anderson batted .308 in 15 games. She also finished fourth on the team with 10 runs batted in.

Taylor Anderson, who was diagnosed with Type 1 diabetes at age 4, is looking forward to next season after the Montana State Billings Yellowjackets' softball schedule was cut short due to the coronavirus pandemic.